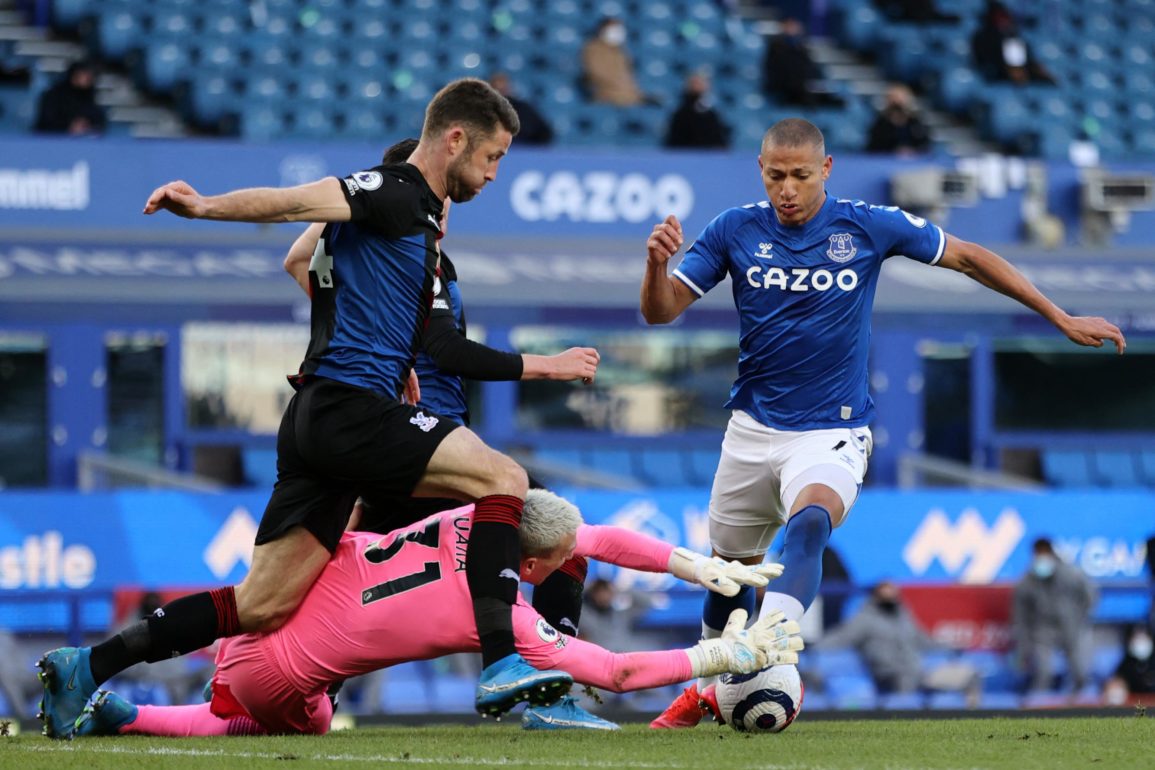 On an evening when Richarlison missed enough chances to win three or four games, James Rodriguez put Everton ahead in the second half, only for Everton to rue a string of missed opportunities to concede a soft late equaliser to Palace substitute Michy Batshuayi in the closing minutes.

It was the same old story for Everton. They bottled a chance to get right back into the thick of the European race by wasting a simply obscene amount of chances in the first half against Crystal Palace and eventually threw away two points by letting substitute Michy Batshuayi score only his second goal of the season in the 86th minute. James’ well-taken goal proved to not be enough, mainly due to the fact that the Toffees’ dropped off significantly after the Colombian’s right-footed finish and left the door wide open for Palace to get themselves back into a game they should have lost by halftime. The prospect of Champions League football next season is all but lost for Everton, and their simply horrific home form makes the Europa League now seem like quite the ask as well. Without further ado, here are my Player Ratings for Everton 1-1 Crystal Palace.

Olsen made a few saves, but he wasn’t very busy until after James’ opener. He had to save a few long-range efforts and a few shots from bad angles, but eventually, he was beaten by Batshuayi. It wasn’t his fault, though.

I thought Michael Keane was sloppy in possession and a lot of Palace’s attacks came down his side of the back three. Batshuayi’s goal

Mina made a great tackle to deny Batshuayi just minutes before the Belgian took his second opportunity. I thought he did well enough.

I thought Mason Holgate was one of Everton’s best players. His pass to send DCL through on goal was simply magnificent. He defended extremely well.

I thought Seamus did well enough with Wilfried Zaha, but he got caught too far forward a few too many times. Maybe that was more a result of the formation, but it still led to Palace’s best opportunities all game. That being said, he was the one to provide the assist for the Toffees’ only goal.

I thought Lucas Digne was relatively disappointing today. His delivery was sub-par yet again, which is genuinely surprising. His lovely little interplay with Richarlison was what eventually led to Everton’s goal, but other than that I thought he was nowhere near his best.

Tom Davies had quite a tough task today having to essentially martial the midfield himself today, and that task got even tougher when Andre Gomes was replaced by the even less mobile Gylfi Sigurdsson. Davies did well enough, but you could tell that Allan and Doucoure were huge misses for the team and for Tom’s game overall.

Andre had a few bad moments and a few good ones, but his game was cut short after just a half-hour with what we’ve been told is a hamstring issue. Let’s hope it’s not too serious.

I thought James was the best player on the pitch. His goal was supremely well taken, as he managed to fit the ball into a seemingly inexistent gap with his weaker foot. His range of passing was on full display, and don’t even get me started on that one touch he had which led to the volley that he unfortunately sliced over. It’s painfully obvious how much better we are going forward with him in the team.

Sure, Vicente Guaita had an amazing game, but the fact Richarlison didn’t score a single goal from the chances he had is close to criminal. He got in great positions, he was hungry for a goal, blah blah blah. What matters is that he was wasteful and was a big reason that we didn’t win this game.

The same goes for DCL. He had fewer chances than the Brazilian, but the two that did fall for him were both one on one situations that he squandered. When Holgate’s lovely long ball found his feet, he could have very easily lobbed the ball over Guaita first time, but instead, he took a touch and gave the Spaniard far too much time to close him down. Right after James’ goal, DCL found himself in on net again, and yet again, hit it straight at Palace’s #31. Poor from him today.

Not much to say.

It was great to see JPG back on the pitch for the first time in forever, but I’m not convinced that his introduction was a smart move from Carlo Ancelotti. The Ivorian seemed understandably lost.