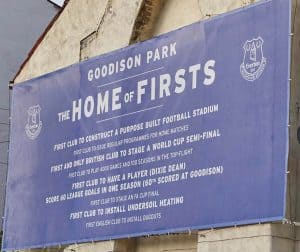 Everton are pioneers in the footballing world, ceaselessly striving to be the best, and the first to accomplish new feats, while establishing new norms. The Nil Satis Nisi Optimum (“Nothing but the best is good enough”) motto could not be more appropriate.

Everton have always been at the forefront of new ideas. Did you know Everton were the first to wear numbers on our backs, the first to have a purpose-built football stadium, and the first go on an overseas tour?

Below is an extensive list of some of the significant landmarks that Everton Football Club has accomplished since its birth.