We’ve compiled this useful resource for fans visiting Goodison Park, whether it be for the first time or returning, with details of hotels, transport, directions, pubs and restaurants and other attractions.

Travelling to Goodison by car

Directions from the north and south

From the M6, exit at junction 26 onto the M58 and continue until the end. At the gyratory go left to join the M57 Junction 7. Exit the M57 at Junction 4 to turn right into East Lancashire Road (A580). Follow the road across Queen’s Drive into Walton Lane. Goodison Road is less than a mile along on the right.

Directions for alternative route from the north

From the M6, exit at Junction 26 onto the M58 and continue to the end. At the gyratory system go a quarter way around, turning left onto the A59 Ormskirk Road. Continue along as the road becomes Rice Lane, and over the roundabout into County Road. Three quarters of a mile along County Road, turn left into Spellow Lane, and then left into Goodison Road. Goodison Park is on the right.

Directions for alternative route from the south

From the M6 exit at Junction 21a onto the M62 to Liverpool. Follow to the end of the motorway and turn right onto the A5058 Queen’s Drive. After 4.5 miles, at the roundabout junction with the A59, turn left into County Road. Three quarters of a mile along County Road, turn left into Spellow Lane, and then left into Goodison Road. Goodison Park is on the right.

Directions from the east

From the M62, exit Junction 6 onto the M57, go to the end of the motorway and then left onto the A59 Ormskirk Road. Then follow the same route for north.

Directions from the west

From the M53, continue to Wallasey and follow Liverpool via the Kingsway Mersey Tunnel. Turn left at the end into Scotland Road, taking the right fork to the A58 Kirkdale Road. Follow the road round for two miles and Goodison will appear in front of you.

The following positions are available to members of the Everton Disabled Supporters Association, and places are allocated on a rota basis:

Travelling to Goodison by public transport

Goodison Park is well placed for access via public transport, be it by bus, train or a combination of the two.

The closest rail station is Kirkdale on the Northern Line, which is approximately 1 mile from Goodison Park.

Liverpool John Lennon airport is approximately 11 miles from the ground.

You can catch the 80A or 86A bus from the front of the Airport to Liverpool South Parkway bus/rail interchange, take a Northern line train to Sandhills station to connect with the Soccerbus service. 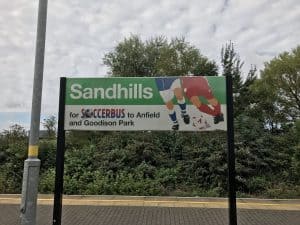 If you’re travelling in by train, ask for a ticket to ‘Goodison Park’ and for an add-on of  just £3 you’ll get a return trip on the Soccerbus. You can also pay as you board the bus – it’s just £3.50 for a return ticket and it’s FREE to those with valid Trio, Solo or Saveaway tickets or a Concessionary Travel Pass.

The Soccerbus service runs for two hours before each Everton match up to 15 minutes before kick off and for 50 minutes after the final whistle. 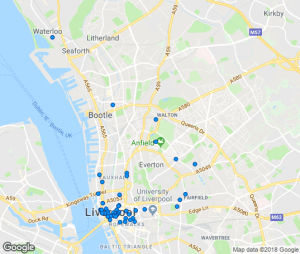 We’ve teamed up with Booking.com to produce a good selection of hotels and other accommodation in Liverpool. You can check out what the current availability is like for the dates that you plan to stay here.

Alternatively, you can try searching with the below deals widget. 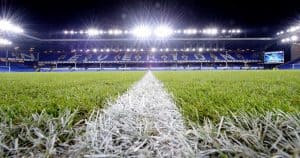 Everton’s expert tour guides will provide an insightful trip through the history of the world’s oldest purpose-built football stadium and one of the most pioneering clubs in the English game.

As part of a revamped behind-the-scenes tour, visitors will get access to the players’ changing rooms – both home and away, take in the view from the Directors’ Box, understand what happens in the Dixie Dean suite on a matchday, walk the tunnel to the sound of Z Cars and emerge onto the touchline taking in the view from the dugout and technical area.

Booking in advance is required. Everton stadium tours do not operate on a home matchday and only Legends Tours operate the day before a first-team home fixture – find out more here.

Which is the best match-day pub around Goodison?

If it’s tradition and atmosphere that you are after then look no further than the Winslow pub; located right next to Goodison Park. The Winslow has long been Everton’s iconic pub and is very popular on match days. If the Winslow is too busy for your tastes and it may well be; try walking a little further up the road to ‘The Brick’, another pub favoured by Everton fans and full of songs and atmosphere. For Away fans many choose to frequent pubs in the city center before travelling to the ground, although The Thomas Frost (Wetherspoons) pub is near the stadium and welcoming!

Other pubs near Goodison Park include The Spellow, The Taxi Club, The Black Horse, The Harlech, The Barlow Arms, The Royal Oak, The Elm Tree and The Albany.

We recently asked fans on GrandOldTeam to vote for their favourite pub near Goodison.