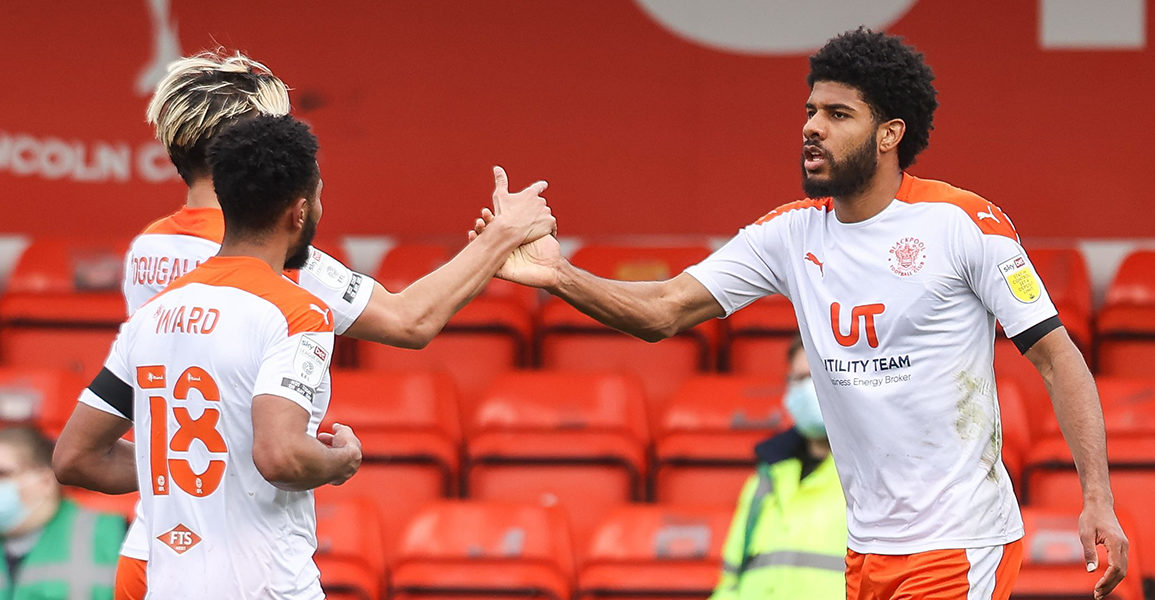 Ellis Simms joined Blackpool on loan from Everton in January and Tom from Blackpool’s utmp provides the insight on how the young striker has got on so far in tangerine.

Simms had the reputation for being one of the most prolific strikers at youth level, but the key question upon his loan move to Blackpool was whether he could do it at League One level. There’s naturally quite a big difference between youth football and the Football League, where teams are battling for three points every week, and in Blackpool’s case are looking to secure promotion to the Championship. The question with Simms was never about quality, but whether he could adapt quickly to a new level with new teammates and a different manager.

In the January transfer window, Neil Critchley was on the lookout for a new striker to supplement the prolific Jerry Yates, and due to the enforced squad cap of 22 players over the age of 21, opted to try and secure a young striker who could hit the ground running.

In came Ellis from Goodison Park, in his first loan move to the Football League. The first thing that strikes you about the man, who turned 20 in January, is his size and stature. He unquestionably has the build of a footballer who has all the attributes to play at any level he wants to, but did he have the hunger and the ability to learn quickly?

The Oldham-born striker made his debut came at Wigan Athletic, and it couldn’t have gone much better for him and the teamas he scored twice having come on in the final half hour in a 5-0 victory. They were two of the easier goals he’ll score in his career, but that brace will have given himself and the coaching staff the confidence that he could offer us something different between then and the end of the season. You can’t underestimate the weight that is on a striker’s shoulders before their first goal, both on themselves and the fans’ patience with a new signing, so it was great for Simms that he wouldn’t carry that burden in the following games.

From there, in truth, he initially struggled to adapt to the physicality of League One and the demands put on him from his teammates. Simms came into the starting XI in place of the experienced Gary Madine, who had struck up a strong partnership with Yates. We were used to Madine’s capabilities in the air and using his strength to bring others into play, whereas Simms was far too raw to be able to play that role and prefers to run in behind.

He went six games without a goal before his third in tangerine came against Wimbledon, and while Blackpool were unbeaten in each of the five games he started in, he was drifting in and out of games. Former Liverpool youth coach and current Blackpool assistant manager Mike Garrity explains the work that he and Head Coach Neil Critchley put into Simms during that lean spell.

He told the Liverpool Echo: “”You look at Ellis, his physique and his profile, and he’s a really big boy, so I think when he first came in, I’m not sure how much he understood or realised how to use that physicality in his game, probably because he never had to do it much at u-18s and u-23s.

“But when he’s playing at this level, against a lot more experienced players who have been around the block and know how to defend those types of strikers, it’s another challenge for Ellis on the step of where he wants to go.”

“We’re just trying to keep him active and keep him moving. Maybe because of his age and stepping into senior football and getting thrown into the deep end, which isn’t easy, sometimes he can have a tendency to drift out the game in his mind. We need to keep him concentrated.

“We’ve been talking to him a lot about staying in the game, staying active, staying around it, staying alive and alert. Even with his profile and his physique we don’t want him to become a battering ram for us. We want to play football.

“So we’re looking at ways and means to use his attributes to help us, because when he opens his legs and gets moving. He’s quite pacey, so we’re trying to concentrate on the strengths he possesses to use at this level.

“We want to put him in as many goal-scoring opportunities and positions as we can. Just this afternoon in training we were talking to him about threatening that last line of defence, working in behind at the right moments.

“That’s the one thing, having watched a lot of his stuff at Everton, he does come alive in the box. Things seem to drop on him, and people say it’s lucky, but it’s not. It’s being in the right place at the right time. They’re the things we have said to him, he has to stay as alert and alive outside the box as he does inside it.”

That work on the training ground has clearly started to pay off, as Simms has bagged two goals in his last three games. He scored a very well-taken half-volley at Swindon Town on Good Friday, then the following week bagged a sublime curling effort at Lincoln City with his left foot. With both of those goals, he’s shown his explosive pace and acceleration around the box, while also showing a cool head and – perhaps most importantly – his ability with both feet.

He makes it look easy when he comes alive around the penalty area, managing to create space for himself and getting a shot on goal. He seems to be one step ahead of the defenders at this level, as he sees the picture quickly and tends to have an aggressive strike on him which often beats the keeper. He’s not one of those strikers who will have a tame effort at goal – when he gets a chance, he usually beats the keeper.

Given his stature, the next step in his development will come in how he can use his strength and ability in the air. If he can add that to his game, then he’ll be ready to make the step up fairly comfortably into the Championship and then even higher.

As a team, Blackpool are playing their best football of the season in recent weeks and Simms is playing a key role now as the side increase their creativity in the final third. His understanding with strike partner Jerry Yates is improving with every week, as well as his chemistry with the rest of the side.

With five goals from his 16 appearances, 12 of which were starts, Simms is showing that he can indeed do it in senior football – and not just score goals, but also play an increasing role in the side.

Can he make it at Everton?

It’s easy to draw similarities with Simms and Dominic Calvert-Lewin, who similarly had a loan spell from Sheffield United to Northampton Town, who were then in League Two, in 2015-16. DCL scored five in 20 games for the Cobblers, including a strike against Blackpool, before making the step up to Premier League football the following season. Simms has a lot of work ahead of him to follow the same path, but it’s not out of the question to suggest he’s capable. He’s far more than just a goalscorer and it will come down to working hard, being patient and having a bit of luck to be able to take his opportunity when it comes along. If that doesn’t happen, I’d definitely say I’d expect him to have a career in the game, whether that’s in the Premier League or towards the top of the Championship.

It’s been an encouraging start for Ellis in senior football and the loan spell under a top coach like Neil Critchley will have helped his development considerably. Perhaps he’s benefitted from the freedom of having empty stadiums during his first exposure to the Football League, enabling him to express himself without the pressure, but from what I’ve seen it will be a matter of time before he’s scoring goals in front of full capacity crowds. I expect him to make the step up to the Championship next season, and hopefully that’s in a Blackpool shirt if he can notch a few more goals as we reach the most important part of the season. If he can play a similarly important role on the Fylde coast as Seamus Coleman did in 2010, then we should have no problem in winning promotion.

utmp is a website run by three Blackpool fans who create blogs, podcast with former players and graphics for past and present fan-favourites. You can give them a follow on Twitter @utmp_ and Instagram @utmp_bfc