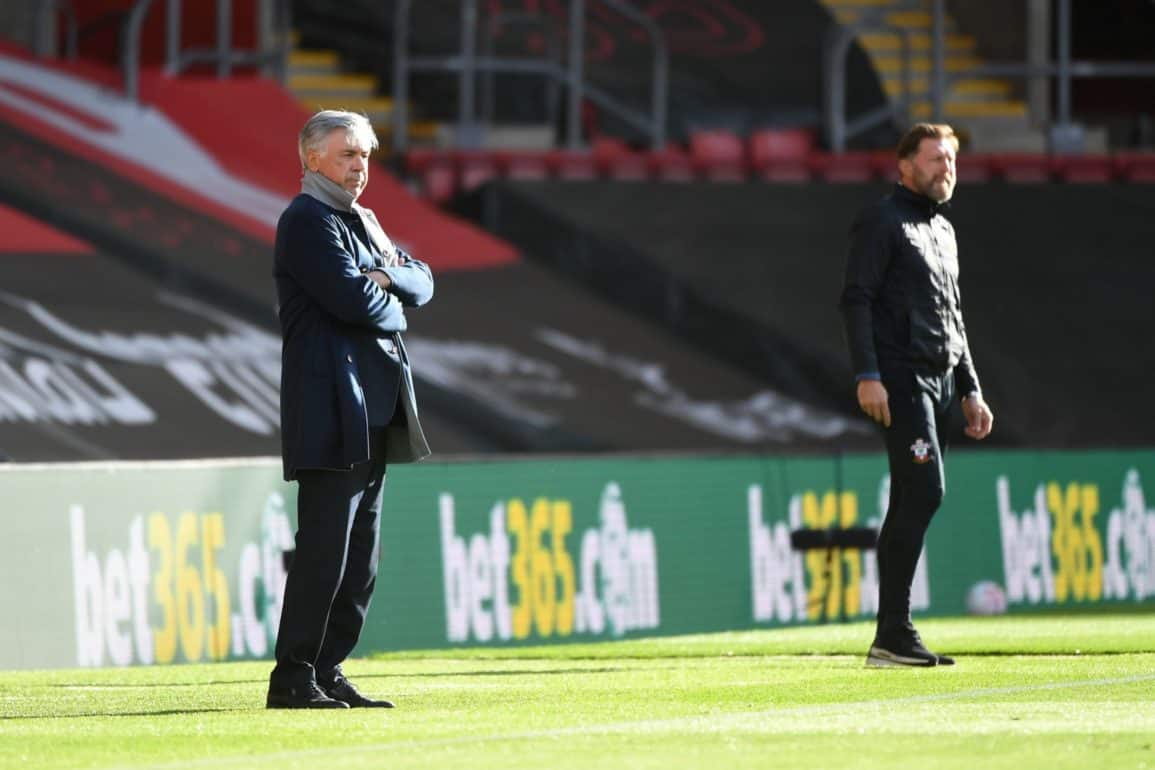 It was a bitterly disappointing first defeat of the campaign for Carlo Ancelotti’s Everton as they were held scoreless on the south coast by an impressive Southampton performance under Ralph Hasenhuttl.

Everton started the game brightly but the Saints took control midway through the second half and stamped their authority on the game through two goals in 8 minutes from James Ward-Prowse and Che Adams respectively.

The second half led to more possession for the Toffees, but there was no cutting edge and Everton failed to create any real opportunities all game long.

Lucas Digne’s harsh red card sealed the matter and Everton accepted defeat for the first time in the 2020/21 season.

Here are my player ratings for Southampton 2-0 Everton.

There wasn’t too much to note from Jordan Pickford’s performance. He may have been able to save the first goal, but James Ward-Prowse leathered it at him from 8 yards out into the corner, so you can’t really expect the England goalkeeper to come up with anything there. The second goal was a result of poor defending and a deflection that ensured there was absolutely nothing Pickford could do about it. He made a few decent saves including one from Oriol Romeu’s driven effort in the first half.

The young Englishman was out of his depth today, but it wasn’t really his fault. He was, of course, playing out of position due to the injuries to both Seamus Coleman and Jonjoe Kenny, and Southampton have preferred to attack down the left all season as well. Godfrey was exposed defensively on multiple occasions and looked out of ideas going forward. It was not the full debut he would have hoped for, but I still think he looks a good player and should be a shrewd addition to the side once playing in his preferred position.

I don’t think Everton’s defensive issues today were really down to the center backs, but I do think both Yerry Mina and Micheal Keane were a bit anonymous. They failed to dominate physically like they usually do and Yerry Mina was nowhere to be found on any attacking set pieces, which were probably Everton’s best chance of scoring today.

Micheal Keane’s only moment of significance during the match was a good tackle on Danny Ings in the second half, but otherwise, he failed to impress. I wouldn’t say he was awful, but it’s hard for me to give anyone good scores after a spineless team performance like the one we just watched.

I think Lucas Digne was terribly unlucky to be sent off today. He was chasing after Kyle Walker-Peters, who slowed down and inadvertently, the Frenchman treaded on the Southampton fullback’s heel and was shown a straight red card. Outside of his sending off, I think Lucas Digne’s delivery today was particularly poor, and the suspension to come is a real blow for Everton over the next few matches.

Allan was not very effective today, as it was quite clear to see that Southampton were constantly overrunning Everton in midfield. Part of this is due to the fact that both Sigurdsson and Doucoure were pushed up quite high, leaving Allan very exposed once Southampton inevitably found the line-splitting pass. Allan had quite a few sloppy giveaways and did not assert himself in the midfield like he usually does, and in my opinion, the midfield is where Everton lost the game today.

It’s the same kind of story for Abdoulay Doucoure today. He pushed up very high next to Gylfi Sigurdsson in the first half, which led to Everton being outnumbered in the midfield on numerous occasions once Southampton’s backline split through the lines with balls into Ward-Prowse and Armstrong. Doucoure made a few good tackles, but his decisions in the final third were poor and he was less than impressive overall. He failed to assert himself like he usually does.

Despite hitting the bar with a dipping effort early in the first half, Gylfi Sigurdsson was quite rightly hooked off by Ancelotti before the hour mark. He offered little defensively and contributed to the midfield problem by pushing up too high. Andre Gomes seems to compliment this midfield three better because he sits deeper and tries to progress the ball from a safer position, while Sigurdsson stays well further forward, leaving Allan and the backline very exposed when Everton lose possession. In the second half, there were many times where he seemed to let Southampton just walk on by him, and he did not offer anywhere near enough going forward to make up for his lack of defensive capability.

Alex Iwobi started the game relatively brightly, but his performance grew very poor as the first half went on. He lost the ball a startling amount of times and failed to create anything other than one through ball for Sigurdsson whose cross was cut out, leading to a Southampton counter. He had multiple miscontrols, poorly placed passes, and bad decisions with the ball, leading to his replacement at halftime. Carlo Ancelotti had little choice. Alex Iwobi was very poor, and his £28 million price tag looms large yet again after what was an encouraging start to the campaign for the Nigerian.

It was exciting to see James announced in the starting XI after being all but ruled out by Carlo Ancelotti on Thursday, but the Colombian failed to dazzle like he usually does. He was neat on the ball and made a few good switches and dribbles as always, but his chance creation was not up to par today, and he failed to impact the game in the way he has been so often this season. By the end of the game, he was clearly nursing his left hamstring but could not come off due to the fact Ancelotti had used all three substitutions before the hour mark. I really hope that is not a lasting issue.

Dominic Calvert-Lewin’s freakish scoring run finally came to an end today, but it was hardly his fault. I would say that the service he received was shocking, but that would imply he received any service at all. He failed to register a single touch in Southampton’s final third, I believe, and was completely anonymous all game long. He had zero impact whatsoever, and so despite the fact he was feeding on crumbs, I still have to give him a 5.

I thought Bernard was an immediate improvement on Alex Iwobi when he came on for the second half, and he looked pretty sharp. He had one fantastic change of direction which sent a Southampton defender sprawling, but his cut-back failed to find the left foot of James Rodriguez in the box. It was a decent 45 minutes for the little Brazilian in his first Premier League appearance of the season.

I thought Anthony Gordon was really good when he came on, and he should have started the game in my opinion. The injection of pace was immediately apparent, as just mere seconds after coming on the pitch he flew down the left-wing to gather a long pass before slotting the ball into Bernard, leading to the dribble and cut-back I just mentioned. He also had one drop of the shoulder a few minutes later that completely sold two Southampton defenders. He was the best Everton player on the pitch for the final 32 minutes of the game for me, and I really hope we see him in the starting XI against Newcastle next week.

Fabian Delph had a bit of a calming influence on Everton’s midfield when he came on, and I thought he did well to calm the game down and make the center of the park a bit more assured. He was more disciplined than both Doucoure and Sigurdsson and was a big part of the fact Everton managed to not concede in the second half after the first period in which Southampton looked like scoring every time they sauntered forward. Not a bad stretch of the legs for the veteran.