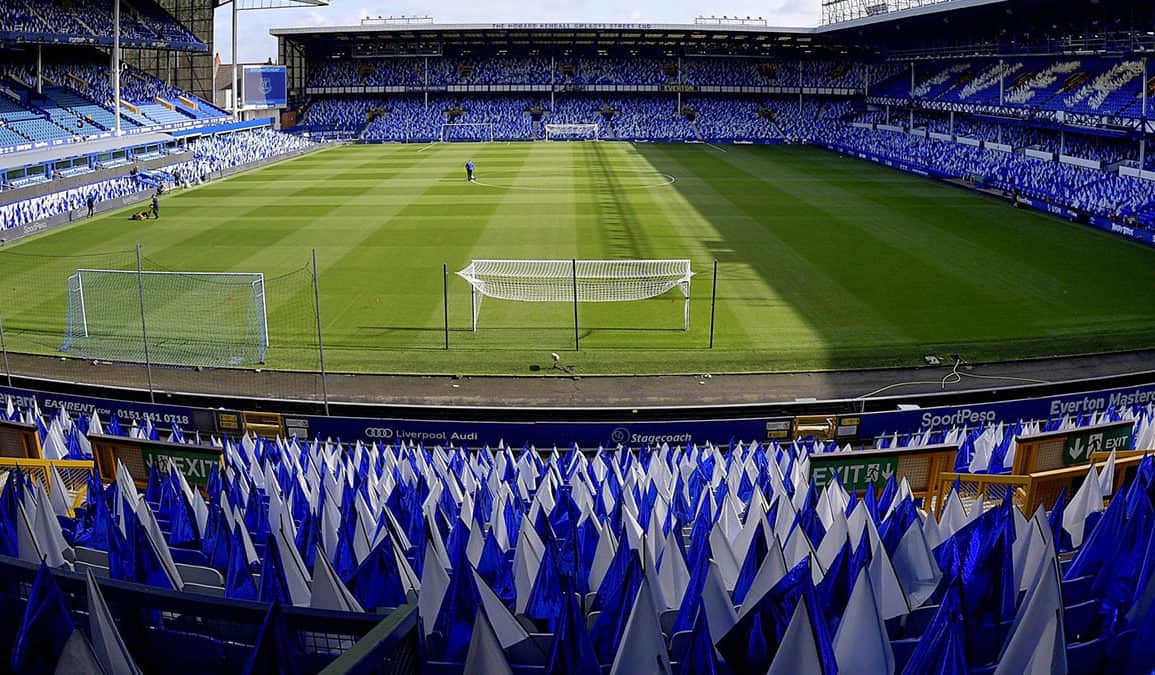 Back in the early 1990s, sartorial discipline amongst certain Evertonians reached a level of stripped-down asceticism more akin to a Benedictine order. No edict ever came from on high, but the maxim that wearing colours was frowned upon permeated through elements of the fanbase nevertheless. After a certain age, sometime in your early teens, it was made known that coming to the match in anything more club-orientated than a WSAG t-shirt would be considered an ostentatious infraction, one that would mark the wearer down as exhibiting that most damning of characteristics, ‘Kopite-behaviour’.

Gradually, over time, the maxim’s strength began to dissipate and as the 1990s rolled into the 2000s and beyond, it became more commonplace to see your Da wearing an overly-stretched home shirt in the Park End. Blue is very much the colour as you cast your eye around Goodison today, the restrictions of the past a largely forgotten footnote in Everton’s history, a bit like Rob Wakenshaw or ‘Dixie’, the horrifying foam boy who once haunted the pitch in the name of club-endorsed fun.

But its memory comes to mind in light of recent developments, namely the attempts by the club and certain fan groups to challenge the growing library-fication of Goodison.

There is no doubt that when the occasion demands, like Derby day, big cup games or the visit of one of the ‘elite’, Goodison still retains its power to intimidate. The capacity of the fans to get the ground to shake has never diminished and in recent years there have been any number of occasions when that famed Goodison atmosphere of lore has reared its head to bite and chase opponents away.

But what has changed, what has become more of a concern are those times when the Shite aren’t visiting, when it’s just a routine cup tie, when the rest of the Premier League are in town.

There have always been occasions in the past when the atmosphere in the ground has lulled. You cannot sit through as much mediocrity as the average Evertonian has over the course of the past 30 years and not expect the fans to occasionally view the turgid, joyless display in front of them with a shrug of indifference.

But those lulls have stretched of late, a yawning chasm of indifference that has turned the ground from a bubbling cauldron into a barely simmering pan.

The efforts by the club and fan groups, specifically The Originals 1878 to do something about this last season, marked a long overdue attempt to solve the problem of Goodison’s shortcomings. Whether it’s the siren, the proliferation of flags or the proposed singing section, there now appears to be a concerted effort, and a definitive movement to create a different kind of atmosphere at the match.

Although there has been support from the wider fanbase, it’s fair to say that not all quarters have welcomed what has taken place so far. The recent home game against Watford acted as flashpoint between those hostile to change and those willing to try anything to restore Goodison’s once mighty atmosphere.

To some, the flags that were handed out before the game and the presence of fireworks on the pitch was a step too far. For them, these moves got filed under ‘Kopite-behaviour’, that most damning of labels. And it’s the appearance of that term on social media, accompanied by Orwellian-like grumbles of ‘un-Everton’ behaviour that brought back to mind those far-off days of sartorial discipline.

Evertonians for so long have defined themselves by what they are not. In the 1990s, other fans, specifically those across the park, embraced club merchandise with the fervour of the recent convert. You showed your love by how much you spent. If the club could stick a crest on it, you bought it. But not for us. We wore our support more discreetly. Maybe a hat or scarf in the winter, a WSAG badge all year round. You knew you were an Evertonian. There was no need to advertise the fact to everyone else.

Although there was a certain dignity in that, perhaps it went too far. While there is everything wrong in turning up to the ground bedecked, head-to-toe in your club’s colours, there’s nothing wrong with wearing the home shirt. Over time, our sensibilities have shifted, accommodating the changes that have taken place in the game without completely going over to the dark side.

But that sense of positioning ourselves in opposition to everyone else has not gone away. It’s at play here again today with the debate surrounding Goodison’s atmosphere (or lack thereof). As fans, we associate club sponsored flag waving, pyrotechnics on the pitch and organised singing sections with clubs who are particularly un-Everton (that term again), the kind of clubs who have to manufacture their own narrative, tell their fans what to feel, conjure up an atmosphere where one would not exist. We see ourselves as different from this, a cut above, a fanbase unsullied by such nakedly desperate attempts to create something tangible from nothing.

That positioning would not be so bad if the alternative was an authentically generated atmosphere. But it isn’t. The alternative is patchy at best. We could afford our lofty stance in the past because Goodison was a great place for the home side to play and a daunting place for other teams to visit. But when long spells of the game are greeted with muted silence, is defining ourselves by what we are not a luxury we as fans can afford?

Pre-organised flag waving and fireworks on the pitch might not be to everyone’s taste, and I’ll admit that the sight makes me feel slightly uneasy. But in the fight to get the ground rocking again, surely it makes sense to try all the tools in ’the arsenal?

Like a fifty-year-old wearing an Everton shirt to the game, embracing what is happening at the club right now might be something we all just have to get used to.