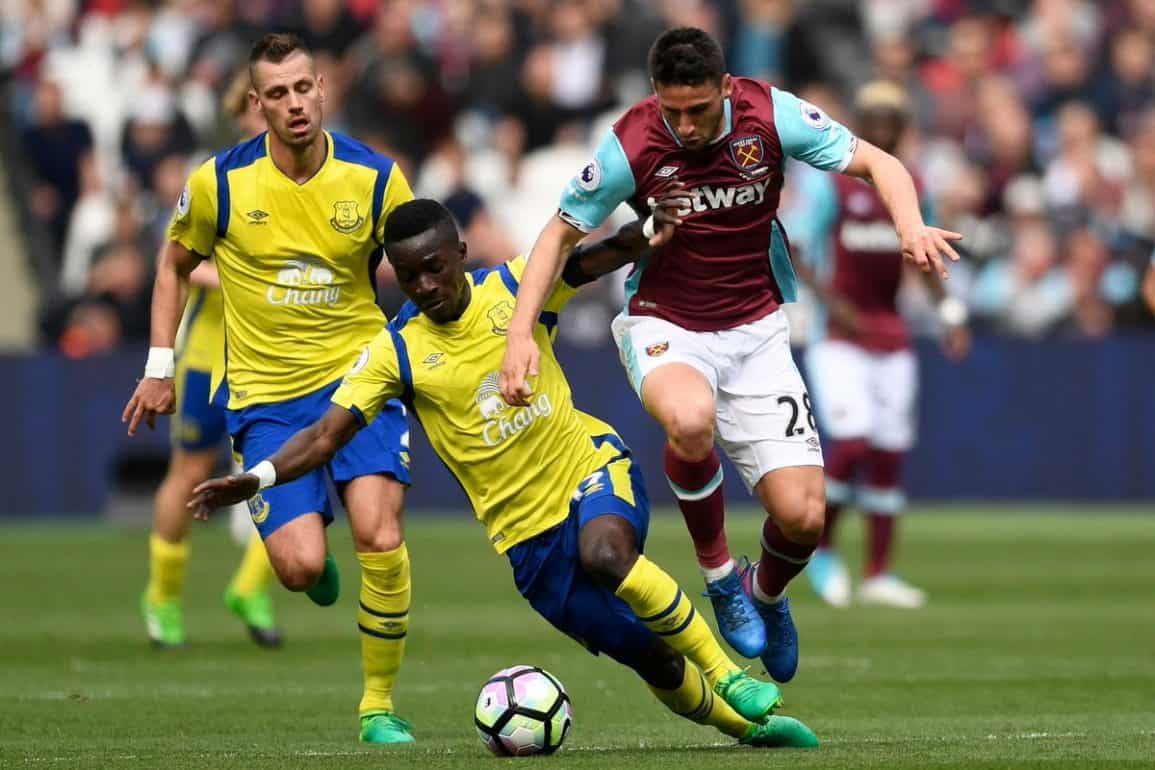 Brief summary… A drab, lack-lustre offering from Everton saw a point added to the seasons’ total, from a game in which positives were a rare commodity.

Everton travelled to the capital for the penultimate time this season and looking to continure their recent good form that has yielded nine straight home wins, and with Romelu Lukaku in excellent goal-scoring form against a team he relishes finding the net against.

Under pressure Slaven Bilic with only one win in nine game and without the services of Andy Carroll to lead the line, rang the changes as he selected the following Hammers eleven: Adrian, Fonte, Reid, Collins, Kouyate, Nordveit, Fernandes, Masuaku, Ayew, Calleri and Lanzini.

In charge of proceedings was referee Roger East.

Perfect conditions for playing football adorned the former Olympic Stadium as the home side looked for three points to maintain Premiership status, while for Everton, the aim remained chasing a finishing place better than seventh to avoid having to play July qualifying rounds in next seasons Europa League.

A tough early challenge by Tom Davies saw a lengthy delay for treatment to Kouyate before the somewhat scrappy start to the game continued.

The home side had the first meaningful possession with a succession of crosses that led to a corner that was swung to the back post, beyond Stekelenburg, but too strong for Kouyate to get on the end of.

Fernandes almost hung Adrian out to dry with a woeful throw in that Lukaku tried to make the most of before the goalie recovered the loose ball, the incident indicative of the nerves prevalent amongst the home side.

Schneiderlin with a terrfic challenge on Kouyate found Barkley but his attempt to release Lukaku was snuffed out by the attention of Collins.

Quarter of an hour in and the Blues were slightly the better side, but not yet imposing themselves on West Ham. Tom Davies got a talking to but no yellow card from the referee for a slightly mistimed challenge on Reid that saw the Hammers player need treatment.

Everton were bossing the possession, but not dominating the game and the overwhelming feeling was that a 10% increase in effort and pace over the patient approach would reap major dividends.

Gueye with a lapse of concentration lost possession and was booked for a challenge on Calleri as the home side looked to counter quickly through midfield, while Fernandes was the first Hammer to see yellow, just past the half hour mark, as the game continued to be something of a snoozefest.

Ronald Koeman looked like he was ready to make the same half time move as last week with Gueye having been booked as he sent Gareth Barry out to warm up with over five minutes left on the first session.

A Williams header on a West Ham free kick caused a moment of panic in the Everton defence, but the ball was cleared for a corner that brought nothing for the home side.

Schneiderlin was lucky to escape a booking for a foul on Ayew as the home side began to up the pace in the late stages, Baines clearing from Lanzini and Williams thumping another clearance to safety.

As expected Barry came on for Gueye after the interval and Ronald Koeman gave a clear indication of his disappintment at the first half showing as Tom Davies was replaced by Ademola Lookman.

Holgate floated a cross from the right that went through to Baines and when he fed Mirallas, his final ball was picked off and cleared by West Ham.

Jagielka with a superb and brave block denied a piledriver of a shot from Lanzini as finally the game began to pick up pace and both sides appeared more interested.

Ashley Williams saw yellow on the hour mark for pulling down Kouyate and West Ham made their first change bringing on Sakho for Calleri.

Gareth Barry became the third Everton player to get him name taken for a block on Ayew after Lookman had lost possession in midfield.

As the final twenty minutes loomed, Everton prepared to bring on Dominic Calvert-Lewin in a final attempt to try and wring something from a turgid afternoon in East London having recorded just one attempt on target in the first seventy minutes – DCL duly replaced Kevin Mirallas.

Lanzini worked a shooting opportunity from just outside the penalty area, but his weak shot was easily gathered by Stekelenburg.

Barry released Lookman and the youngster advanced on goal before looping his shot just over the bar in a rare attacking moment from the visitors perspective. Fonte then clattered into DCL and was rightly booked.

Bilic sent on defender Cresswell for Kouyate – a painfully obvious attempt to ensure his side took a point from the game, this despite Everton’s attack apparently still languishing in the dressing room.

Lukaku failed to get on the end of a decent cross from Holgate ahead of two wasted corners and a cross from Baines that Jagielka got too but couldn’t direct his header on target.

Williams blocked a Sakho soht to give the home side a late corner however Fonte could get neither power nor direction on his header and the ball bounced kindly into the arms of Stekelenburg.

The fourth official condemned the crowd to another two minutes of goalless pain before mercifully Roger East brought this excuse for a top-flight game to a conclusion.

Final Summary… For a side still in with a mathematical chance of finishing in the top four, Everton looked more like a side who had already decided the beach and suntan lotion was more important.

Defensively, Everton were okay with just a couple of dodgy moments but with Martin Stekelenburg largely a spectator… as was his opposite number who did well to stay awake, such was his level of inactivity after the first hald scare from the Fernandes throw-in.

With Chelsea the visitors to Goodison Park next Sunday, Ronald Koeman and his coaching staff could spend a large part this coming week kicking some backsides.