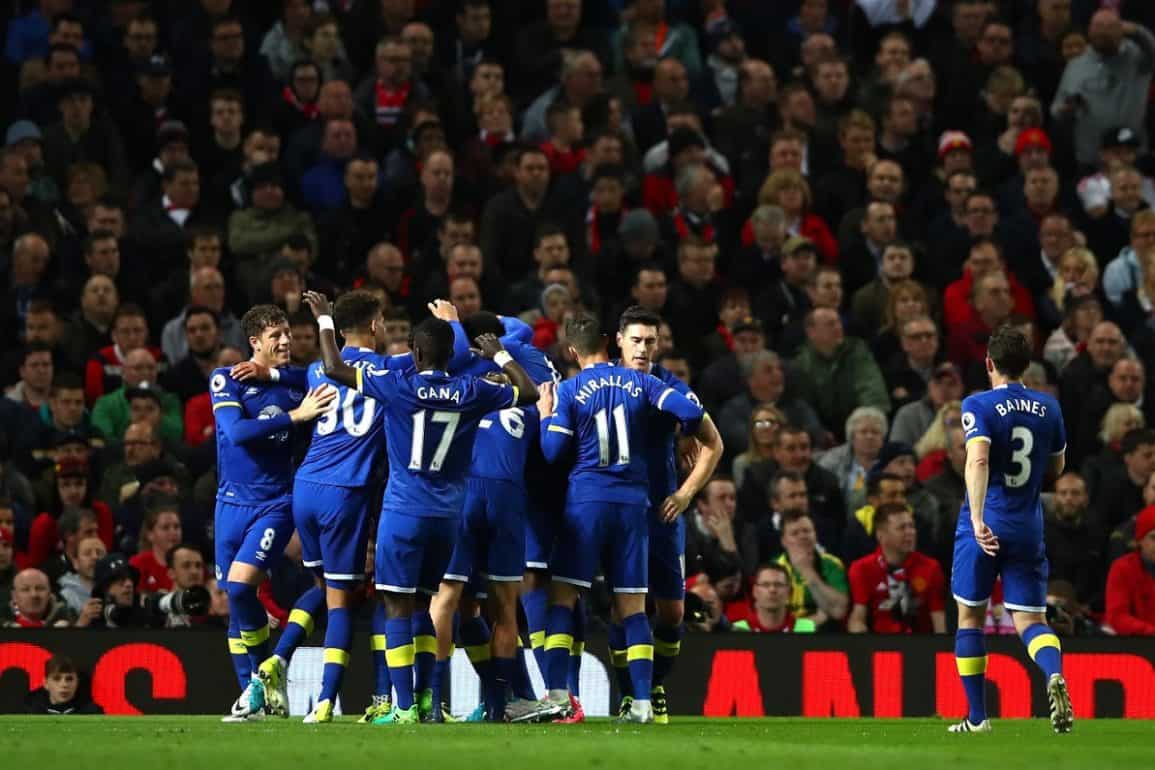 Man United 1 – 1 Everton
​
Brief summary… A battling and brave performance from the Blues was dashed at the death as Ashley Williams picked up a straight red card to give United the spot kick reprieve.

They say that the get over falling off a bike, the best thing is to get back in the saddle as quickly as possible. So after the massive disappintment of the ‘derby’ Everton couldn’t have wished for a bigger and much quicker test than to travel the M62 to play a somewhat stuttering Untied.

For the home side, Jose Mourinho was able to welcome back two influential players from suspension as he lined up his charges in a 4-5-1 thus: De Gea, Young, Bailly, Rojo, Blind, Herrera, Carrick, Fellaini, Lingard, Rashford and Ibrahimovic.

Blowing the whistle was Neil Swarbrick.

The home side stated the better forcing two early chances first when Rashfords’ movement caught Jags unawares, but the skipper got back to force the corner and then Williams with a superb recrovery and block to deny Inrahimovic.

Carrick played a smart ball into Lingard in ocenas of space but he planted his shot well wide of the target. United were then denied by the offside flag as Ibrahimovic played Rashford in, but Robles saved his effort anyway.

Everton were settling down and beginning to deny the home side time and space in midfield and it was Barkley getting forward who forced the Blues forst corner on 17 minutes.

Everton were now beginning to press Untied back and when Barry played a delightful chip over the top for Mirallas, De Gea had to be alert to kick his hard shot away for another corner.

And when the corner kick was swung into the near post, Williams flicked the ball to the back post where Phil Jagielka out-muscled Herrera before playing a delightful, outside of the right boot flick past the defender and through the legs of De Gea for the opening goal on 21 minutes.

The Blues were now much more confident and really working hard to press United and deny them space to build any real offensive momentum. Mirralls to Barkley and he found Lukaku on the right. He cut in and fired his near post shot just wide.

Lingard made the most of a silly challenge from Mirallas to earn a free kick just outside the box and Robles had to be brave and quikc to save Blinds’ curler, colliding with the post in the process while Herrera hit the rebound effort off the crossbar from a very tight angle.

With the home crowd getting frustrated the travelling Evertonians serenading Seamus Coleman, we went in search of a second goal. A slightly poor tough forced Lukaku to go on his own when a ball to Mirallas in space on his right would have been a more dangerous option. Lukaku saw his shot blocked and the one-time volley from Davies hit Mirallas now in an offside position.

Robles made another very good save on 38 minutes diving full length to his right to turn away a 25-yarder from Herrera as United tried to get back on the front foot.

Young raced away from Davies down the right but his cross right across the six yard box was flicked to safety by a cool Holgate.

Gana Gueye was booked on 44 minutes for an ankle tap on Ibrahimovic and the last meaningful action of a decent half saw Jagielka with a superb challenge deny Rashford set free by Ibrahimovic.

Mourinho brought Pogba on for Blind for the second half while Ronald Koeman stood firm with his starting eleven who had done so well in the opening stanza.

Good possesion early on saw the Blues work a shot for Mirallas but De Gea had no problem saving at the foot of his left hand post.

William with a vital block on a cross from Ibrahimovic then got vocal as Unitied won the ball back in midfield and looked to return the pressure to the Blues defence.

Barry took one for the team on 54 minutes with a blatant, but needed check on Rashford after Holgate and Young had clashed on the half way line.

From the free kick, the ball cannoned off the crossbar from a Pogba header, Baines lashing the ball to safety, but United were now in the ascendency with Everton defending stouting if a tad fortuitously.

Young clattered Mirallas after he thought the Belgian should have played the ball back to the home side following a drop ball, eventually the referee brandished Young the deserved yellow card.

Everton were now looking to catch United on the break and a nice clearance by Holgate allowed Barkley to set Lukaku free on the right and his cross for Mirallas was desperately cleared by the home defence.

Rashford jumped all over Barkley and inexplicably, the referee waved play on and Robles saved from Fellaini when the cross came in.

United sent Mkhitaryan and Shaw on for Carrick and Young respectively in the 65th minute and Shaw was quickly into the action but his cross was easily cleared.

Koeman responded by withdrawing Mirallas in favour of Pennington to add more cover at the back in readiness for the expected final 20-minute onslaught from the home side.

The Blues were happy to gain possession and play the ball around eating up some time and the home fans were again howling as Barry seemed to drag Rashford back with no free kick given.

Great work at the back from Holgate cleared the ball to Gueye who was fouled by Shaw ahead of a cross from Herrera being converted by Ibrahimovic only for the correct decision of offside to rule out an equalising goal.

Everton were riding their luck somewhat, but fortune favoured the boys in blue again as Robles was pressured on a cross and Barry did enough to force Fellaini to shoot over the bar.

United were turning more and more to lumping the ball in the general direction of Fellaini but the Everton defence were coping well. Lingard pinged another cross across the face of the Everton goalmouth with nobody close to adding the finishing touch.

The pressure was building and a Rojo header from a Pogba cross cleared the bar when he really should have forced Robles into a save.

Shaw then denied Gueye when Barkley sent the ball beyond De Gea and the next Everton break saw Lukaku break clear only for Bailly to make a terrific challenge to force a corner.

The corner came to nothing as the TV pundits continued to debate whether the offside call on the ‘equaliser’ was correct and almost inevitably, Howard Webb decided it should have been a goal… surprise surprise.

Calvert-Lewin came on for Barkley with ten minutes to play and United continued to pump balls into the Everton box more in hope than with real purpose and conviction.

Gareth Barry was rolling back the years and got an important late block to a Lingard shot and then Evertonian hopes of a breakaway second were dashed as DCL found Lukaku, but he was easily dispossessed.

Davies was booked on 87 minutes before another United cross found Ibrahimovic but again the header cleared the bar.

Thr fourth official indicated four extra minutes – quite where he got them from is anybodies guess.

Everton were understandably tiring, but sheer will and determination was keeping them going. Pogba went down theatrically under pressure from Gueye and Howard Webb suggested that Gueye should have seen yellow and red for the challenge – ironically, the referee on the pitch gave nothing.

In the final minute Shaw latched onto a loose ball and Ashley Williams had little option than to dive to stop the shot, and duly saw red for his effort. Joel Robles went slightly too early to his right and Ibrahimovic netted to his left to deny Everton three points.

Final summary… After the no-show in the ‘derby’ Everton picked themselves up, rolled up their sleeves and put in a much better showing against a Manchester United side laden with talent, but largely firing blanks at home. Much has been said about the age and decline of Gareth Barry and captain Phil Jagielka, but tonight they were shining examples of guts, determination and experience. With some better decisions up front and 10% more cutting edge, Everton could and should have secured the three points, but Howard Webb, sorry United got the penalty about which there were no arguments and the spoils were shared.