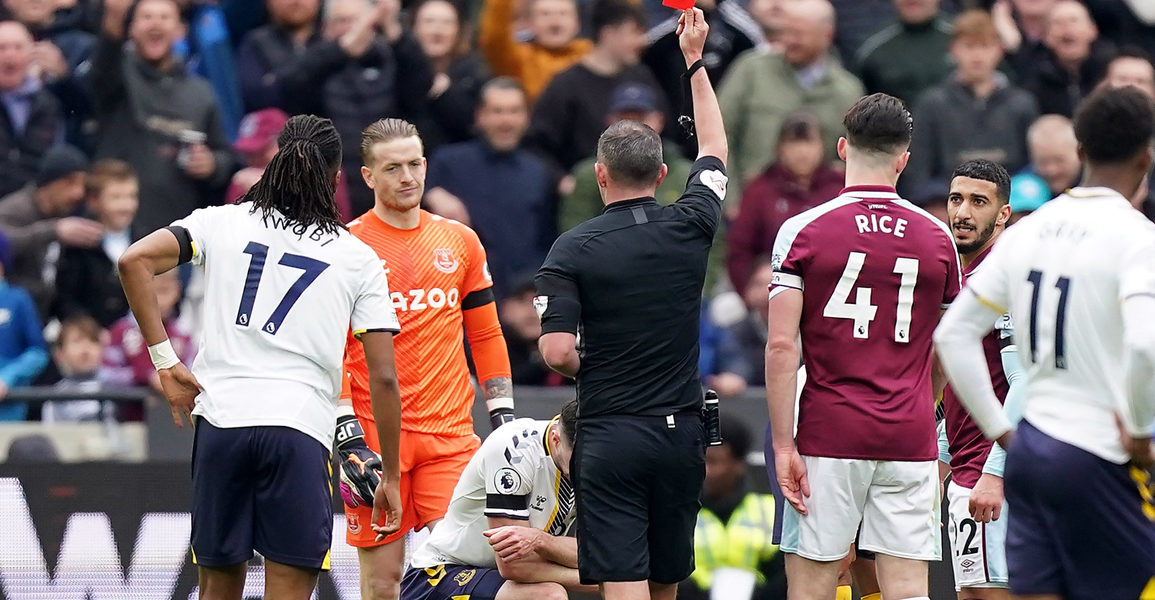 Everton again failed on the road despite a terrific Mason Holgate strike that drew them level but, another red card, this time for Michael Keane set them behind the eight-ball after Bowen had put West Ham back in front.

Despite Everton having exited the FA Cup last time out, the trip to the capital to take on West Ham was bein referred to as the first of eleven cup finals as the Blues strive to secure the points necessary for Premier League survival. Meanwhile the hosts under former Blues boss David Moyes are striving for a top six finish, are still going strong in the Europa League and staking their claim to be the newest ‘best of the rest.’

Irons manager Moyes shrugged off the pressure of still playing in two competitions when he commented in his pre-match press gathering, “It doesn’t affect my thinking that we have a Europa League quarter-final next week because we have to concentrate on this game first. We’ve got a busy schedule as well, so we’ve got to be aware of that and try to make sure we don’t overcook any of the players, but at the same time we need to win the next game – and that’s against Everton.”

His immediate squad concerns centred around the match fitness of forward Jarrod Bowen, defender Vladimir Coufal and midfielder Manuel Lanzini following a car accident. On Bowen and Coufal he noted, “There’s a chance that both of them could make it, they’ve both done a bit of training over this international break, so there’s a chance they could both be there. I’m not quite sure both of them are actually ready and match-fit again, so that’s probably my only concern.” And on Lanzini he added, “He’s a bit sore but he’s okay. It’s terrible, as it would be for any of us, but we don’t want to go on too much about it. Sadly, it happens in all walks of life. It’s happened to Manuel but he’s okay, thankfully.”

With an unenviable run of eleven games away from Goodison without a win, Blues manager Frank Lampard threw down the gauntlet of challenge to his players when he stated, “I challenge the players all the time to show what they’re made of. That is the Premier League and its demands, I don’t see anything in my comments [after the Palace loss] too far from the norm. If you are playing at this level of competition, the basics have to be there – and character and fight are among them.” He continued, “To play for Everton as a young man means you have character… it is applying it in the right way. How we are as a club and a squad is hugely important. If you saw the character and togetherness of the stadium against Newcastle – the players and the fans and the staff – it is clear those things are there, that is not in question.”

He expanded further adding, “The question is sustaining it and applying it in every moment you can. There is so much to mentality, it is too easy to speak casually about. You will take hits in the Premier League, home and away, and when we’ve taken them away we’ve not recovered well enough. That is something we need to improve.”

In preparing his squad for the visit to West Ham Lampard advised, “The break has been positive for Dominic [Calvert-Lewin],” said Lampard in Friday’s pre-match press conference. “I haven’t had the benefit of having him for many league games – just three starts for us – and he was playing short of fitness and a striker wants and needs to be 100 per cent. Fabian Delph, we’re hoping, is another week or so [away from returning] but it’s been a slightly complicated injury. It will be a big plus for us to have him in the squad, particularly in that area where we do have some issues.​
On Yerry Mina‘s recovery, Lampard added: “Yerry should be, hopefully, back with us within the next couple of weeks. He is a big player for us – an international player, a player of stature, a player with personality, a big personality in the dressing room. I knew that from before I came and I know that from being here now, even though, unfortunately, I’ve not had much on-pitch time to work with him.”

However, a thigh injury sustained by Donny van de Beek in the pre-game warm-up meant a change before kick-off with Mason Holgate deputising in a midfield role.

At the London Stadium, our referee was Michael Oliver.

A steady opening by both sides before the first effort came from West Ham as a cross from Fredericks saw a shot from Fornals blocked by Keane and cleared, the Blues then got forward and Richarlison tried an overhead kick that cannoned to safety off a West Ham defender. Iwobi with a deft cross towards DCL saw Zouma climb to head clear and as the home side counter attacked, Fredericks skewed a cross over the Everton crossbar.

Antonio found by Bowen saw Keane with an excellent block to send his shot behind for a corner that Richarlison headed away, the Hammers keeping the pressure on and Bowen shooting from distance straight into the arms of Jordan Pickford. A quick counter attack by West Ham threatened danger but a superb tackle by Pickford on Fornals saw the ball pop up nicely for the England ‘keeper to gather comfortably. On 13 minutes, Mason Holgate went down and judging by the way the physio ‘attacked’ his socks, they must have been too tight on his calves.

Everton won their first corner as Zouma turned a cross from DCL behind only for West Ham to easily clear the set piece taken by Gray. Iwobi found Richarlison in space for a cross from the elft that was only partially cleared, Holgate with a shot that was blocked and then Iwobi crossed too close to Fabianski. Twenty minutes gone and it was pretty even between two sides with contrasting targets, West Ham seemingly happy to let Everton enjoy possession and then looking to counter at speed against a defence that many see as being fragile.

Dawson with a crossfield ball found Benrahma and his cross saw Godfrey head free despite an accidental high boot from Antonio. Holgate fed Gray for a diagonal ball to Richarlison who tried to play in Mykolenko bursting forward to join the attack only to concede a free kick. Everton were unlucky not to take the lead as a superb defence splitting pass from Iwobi looked to get Richarlison in on goal, he beat the onrushing Fabianski and it was down to Fredericks with the saving tackle to deny the Brazilian ace.

A foul by Holgate on Bowen gave West Ham a free kick five yards outside the Everton penalty area, and Cresswell bent the direct 32nd minute free kick around and over the wall and perfectly into the top corner, giving Pickford no chanc

After a promising opening half hour, and having fallen behind, Keane was booked for bringing down Antonio and we were now to find out if the Blues had the cahones that Frank Lampard suggested they had to show to save the season.

Into the final five minutes of the half and Benrahma, taking a ball from Fornals, threaded a ball through to Antonio met by Pickford who was tremendously quick off his line to force the Hammers forward wide and only able to hit the side netting. Two added minutes were announced as Antonio backed into Keane and win a free kick and as West Ham kept the pressure on after the clearing header by Mykolenko, Pickford needed two attempts to hold onto a cross from Benrahma.

No changes by either manager for the second half and Everton really needed to find some pace, intensity and most of all, quality in their play if they were to get back into the game.

Alex Iwobi, working hard in midfield, latched onto a loose ball to deftly play in DCL who blazed his effort high and wide when he really should have hit the target at least. Gray with an increase in pace got the Blues forward and Richarlison won another left wing corner that Gray took and Fabiankski punched clear as far as Richarlison anf his little lay off saw Mason Holgate strike a stunning volley through a crowded area into the far corner for 1-1 on 53 minutes.

Everton were understandably re-invigorated and playing with much more intensity, and roared on by another sold-out visiting section of travelling Blues. But, as so often happens, it was less than four minutes before West Ham regained the lead as Iwobi lost possession and Benrahma fed Antonio, his shot saved by Pickford with his legs only for Bowen to net the rebound.

Everton tried to respond in kind and DCL went down as he tried to burst into the West Ham area before Michael Oliver blew for a foul by Iwobi. Holgate led another charge and tried unsuccessfully to buy a penalty claiming a foul by Dawson. Gray fed Mykolenko on the overlap for a cross that Zouma headed clear and another quick West Ham counter needed Pickford to race off his line and clear from Antonio. Dawson brought down Richarlison to give Everton a free kick that was far too easily cleared and when West Ham countered at speed again, another poor challenge from Keane on Antonio saw him get a second yellow and red card, Cresswell bending the free kick wide and down to ten men again, Everton needed something extraordinary from the remaining 24 minutes.

With Keane back in the dressing room, Mason Holgate reverted from midfield to his more accustomed centre-back role alongside Ben Godfrey. West Ham made a change on 70 minutes, Noble replacing Bowen.

Gray and Richarlison combined to win a corner on the right, and incredibly the short corner to Iwobi saw Gray stray offside – absolutely shocking decision making. Everton got forward again but, with no penetration and a handball by Kenny gave possession back to West Ham who were now looking comfortable and to see out the game with a Europa League ¼ final game to look forward to in midweek coming up.

Anthony Gordon warmed up and eventually joined the fray on 78 minutes, replacing DCL, after Benrahma had bent a shot wide of Jordan Pickfords goal. West Ham again at speed got forward and Mykolenko did well to concede a corner that came to nothing. Inside the final nine minutes and Yarmolenko came on for Benrahma – could Everton yet find something to enable them to salvage a point?

Godfrey with a last-ditch tackle denied Antonio as he bore down on the Everton goal and then a slip by Holgate saw him bring down Fornals and he was booked for his troubles. Mykolenko tried his luck from distance only to see his effort go wide of the target and four added minutes were signalled.

Those final minutes ebbed away and even though they had been far from their best, West Ham had done enough to secure the points, complete a league double over Everton and send the Blues to Burnley on Wednesday for a proverbial six-pointer. Cresswell was rightly booked for kicking the ball into the face of Richarlison, the free kick saw Godfrey head over and that was that.