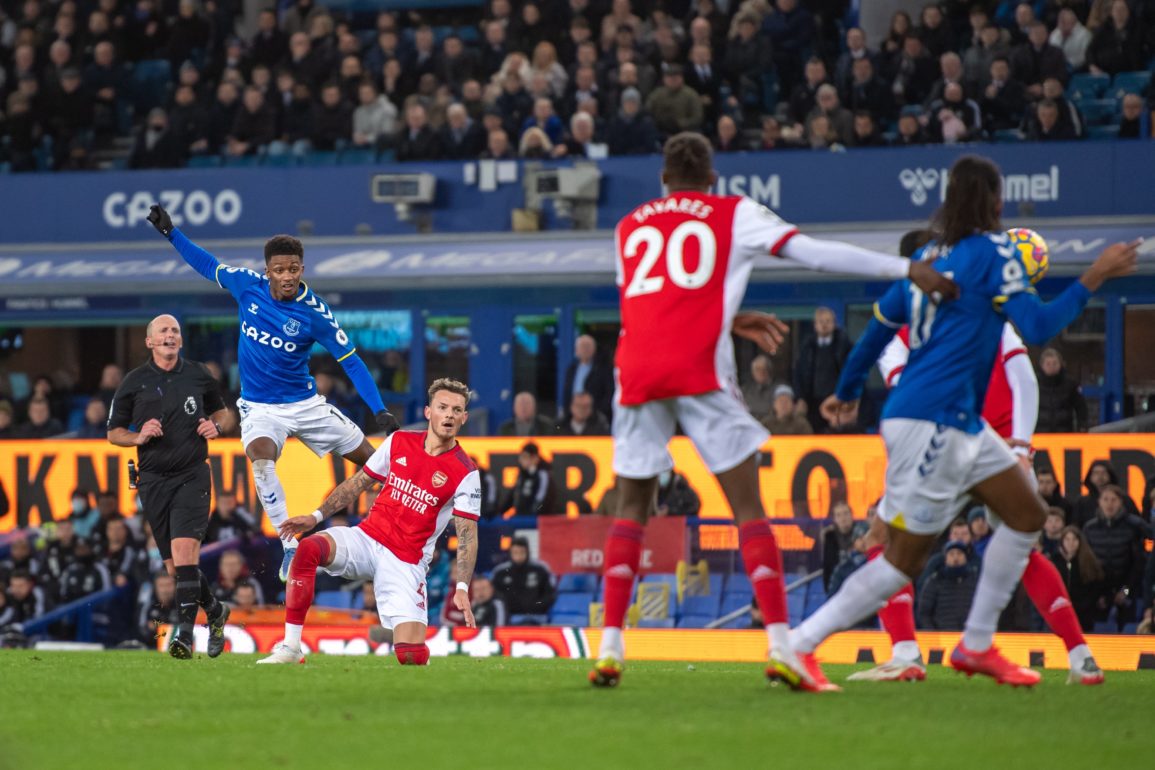 In a match-week which saw Marcel Brands leave his position as director of football, a proposed protest, and question marks over what this all means for Rafael Benitez, a vitally important game of football awaited at the end of it. The spotlight was on Goodison Park for a clash which could have furthered tensions between the Everton fans and the board as we desperately required a performance and a result. There couldn’t be a more fitting setting for either a toxic meltdown, or a turning point in the season. Goodison Park under the lights.

If ever a game needed a statement of intent from the start it was this one, what we got probably surprised a lot of the supporters. We started with a high press and an actual desire to win it back, we picked up loose balls and we got stuck in without being rash. On the ball we didn’t have the quality to create a lot of chances, yet no less than Arsenal who were lucky to be in front at the half but for a good finish from Odegaard, who was a shining light in an otherwise toothless Gunners attack.

Second half Arsenal didn’t really come out. In truth the game was never really about Arsenal, they are a side who haven’t performed away from home, coming into it on the back of a poor result in midweek. There was a sense that this was an internal battle between an Everton which lacks quality and an Everton which has pride and fight. That being said, the two goals we scored late on in the game were of a quality which gives us a painful amount of hope. Demarai Gray has an abundance of talent and is unlike many of the wingers we’ve had over the years in that he can add goals and a threat on the counter attack with his pace. Richarlison gave us something that he has only done sporadically this season, which is not only a goal, but a presence up top. It’s no easy task filling the void of Dominic Calvert-Lewin (just ask Salomon Rondon), but Richarlison’s commitment to the cause cannot be questioned, and he’s a proper player, he just needs to find some consistency. There were plenty of positives all over the pitch, from vital defensive blocks by Coleman and Godfrey, to the persistence of Anthony Gordon, winning headers and pressing defenders, something I remember DCL doing long before he found his goalscoring qualities.

There’s been a lot of talk over recent years about the Goodison Park crowd and how the opposition have to navigate their way around it, playing a certain tune to keep it quiet. It hasn’t always been the bear pit it most definitely can be, we know that, but it has never lost its way of escalating turning points in games. Arsenal, and particularly Mikel Arteta, should’ve known better than to start time-wasting so early on in the second half, this just fuelled the intensity of Everton’s pressing and desire. We sensed the game was there for the taking, Arsenal just wanted it over and done with, and for once this season we weren’t willing to let the game die. A couple of desperately unlucky VAR offsides increased the temperature in the stadium and instead of acting as signifiers of it not being our day, they were turning points in the game, and potentially the season.

So what was different about this Everton to what we’ve seen so far this season? This wasn’t a performance for show, covering distance for the sake of it and going down with a whimper and a rallying cry in the post-match press conference. Those players went out there to win, and credit to them for staying focussed on the task at hand rather than pursuing a self-fulfilling prophecy. But let’s not get (too) carried away. Rafa got it right on this occasion, he set up the team to press Arsenal on the ball, who he probably sensed were lacking in nous and experience, and his introduction of Andre Gomes at the right time gave us composure in attack. Yet, there are some serious question marks on whether he is going to be the man to take us forward. This is a good starting point but it is yet to be seen whether it will be a defining moment for an up-to-now hopeless looking Everton outfit.

The Elephant in the Room

The protest against the board probably didn’t go as planned, it’s hard at this point in time to predict the advantages or disadvantages of this. Monday Night Football kicked off in front of the cameras and the media covered the likelihood of a protest on 27 minutes, this in itself shows the effectiveness of the campaign, and highlights the dissatisfaction many feel towards those in charge of the running of the club. The communication from the board to the fans has been ineffective and non-existent on the whole, yet leaks from the top have continued to find their way to particular talk-shows and media outlets. This won’t change for the better with improved on-field performances, so the victory over Arsenal, as brilliantly Everton as it was, still leaves a problem which will need addressing.

There’s still confusion among Evertonians on who is to blame for our poor recruitment and our lack of direction since Farhad Moshiri’s arrival. Marcel Brands took the fall for the board, but it’s hard to know exactly how much power he had in his role. More confusion will come after this win; clearly Everton are capable of digging in and showing character, there’s some definite quality in our best starting XI, yet what can we expect (and hope) for the rest of the season?

I expect plenty more goals to be conceded, there’s defensive issues and we look vulnerable to intricate play around our penalty area. I expect more injuries to crucial players, the lack of strength in depth is putting additional strain on those who are currently fit. I expect (hope) the arrival of Dominic Calvert-Lewin into the team to free-up Richarlison to add more goals to his tally. Most of all, I now expect (hope for) that level of commitment from the team in every fixture we have from now until the end of the season.

We’re still a long way off and there’s uncertainty on what direction we should be going in, however we should enjoy these moments. After a week of negativity and unrest, it’s easy to forget that Everton are still there underneath the chaos of board politics and managerial scepticism to provide us with one thing we can all get behind. A magical night under the lights at Goodison Park.