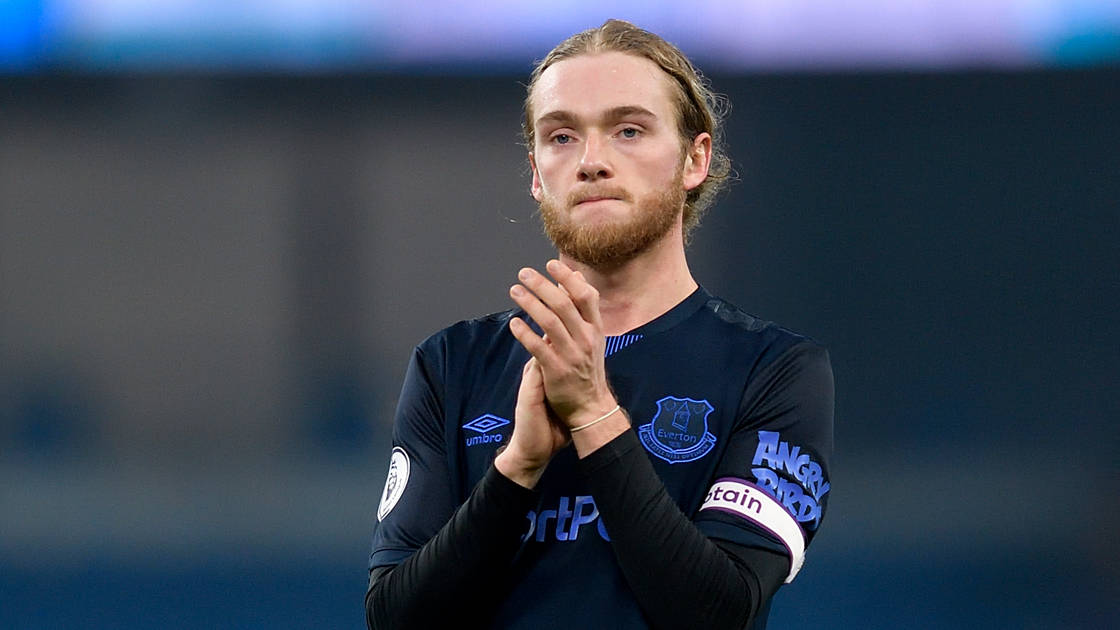 It surprises me when I’m reminded that he has played over 100 times for us. He’ll soon have played over twice as many times for Everton than his uncle, Alan Whittle did.

In truth, our Tom’s barnstorming goal against Man City probably did him no favours. Raised expectations and all that.

As well as thinking that Tom Davies is crap when he plays for Everton, I also think that he’s a nice bloke. Clearly, I don’t know him, and I’m only going off scraps of evidence. I’m always a bit haunted by my little daughter’s question, “Dad, why do you like these people?… They don’t know you and you don’t know them. They can’t hear you shouting.” But he does seem nice, doesn’t he?

SO, Tom Davies, crap but a bad bloke? Surely not, the man does volunteer work with local charities…

The answer to the question, “Why was Tim Howard crap for us in his final season?” isn’t Tim Howard is a great guy, he’s overcome Tourette’s and is a fine leader… Our all-American secretary of defense was allowed to be a goalie past his sell by date, and still a good bloke.

We can’t seem to accept that you can be nice, and not very good. The language that we lob at these players, is the language of someone who isn’t nice.

Take JPG, the man of a million injuries and a handful of appearances. He’s been called useless, a waster. Stealing a living. All seems a bit unfair, for someone who’s had to deal with a nasty string of debilitating injuries…

We like to eat our own at Goodison. Other midfielders, Iwobi, Barkley, Nyarko, Williamson have all been attacked for either not being good enough or being stupid enough to go and get injured. And in our midfield garden of good and evil, players seem fall into one bucket or the other.

I know, I know. What’s the problem? These brats are paid millions to be terrible, and a few words shouldn’t matter.

The problem comes when you flip it, when players do horrible things but are forgiven because they’re “good” at football.

In our minds, virtue and talent are holding hands and skipping off into the sunset together, and it sort of makes sense. Sort of.

How can the man who brings me to my feet, limbs, roaring with joy, be a bad person?

Football makes us swipe things under the carpet. It makes us say that if he’s steaming drunk, barefoot, driving his car into a petrol station, like a real life Grand Theft Auto, just missing humans by a pixel or two, it’s bad. But all will be forgiven if you have the ballon d’or sitting shotgun next to you.

Football makes us choose. And often we choose the sport over real life. Shelving our concerns, only to bring them back up at a later date if the player loses form.

Heresy, I know, but was Alan Ball a nice bloke? In 1968 my dad saw him deliberately kick a Tranmere player in the small of the back as he was lying on the ground. Ref didn’t see it. We turned them over 4-0. Bally will forever be my dad’s utter hero…

Football makes us sell out.

It makes us accept value over values.

Do we reduce everything down to whether players make us happy or not, and then translate that feeling into telling us if they’re virtuous people?

Ronaldo has some pretty serious and credible rape allegations against him.

But for Brendan Rodgers:

“Cristiano Ronaldo is a great role model for all players, young and old. How to take care of yourself. How to dedicate your life to your career. Have that hunger and ambition that drive that will to win and succeed.“

What about Mohammed Bin Salman, the man who provides the lashings and lashings of oil money behind Newcastle United. He’s great for Newcastle United, right? Geordies were dancing in the streets. But many think he’s behind the orders to murder and saw up Jamal Khassoghi. He bombed innocent civilians in Yemen. He once sent a bullet to someone who wouldn’t sell their house. It’s rumored his jailed his own mum for a bit.

Football has tested us, all the way. It’s told us to forget about what happens off-field. And we’ve complied. After all, we watch football to escape. We don’t want to think about rape allegations, or bone saws.

To the pundits who say they don’t want to get into this… What a luxury, to be able to turn your nose up at evil, to make snap character judgments solely on an ability to play football or fund it.

What price, our tribal loyalty? How much would it take to give up on Everton? Collectively, we’re frogs, placed in water and slowly brought to the boil. We’d have leapt out straight away if put in scalding water. But as the temperature has been slowly raised, we’ve noticed less and less…

All the complaints about Ronaldo and MBS? Just a squall, it’ll pass.

Where do we draw the line?

Players… How about if he drink drives? Beats up his wife? Shags someone else’s wife?

Owners… How about if he’s one of the most feared and brutal leaders in the world?

Boiled frogs, the lot of us. But I guess it doesn’t matter, as long as they keep winning…