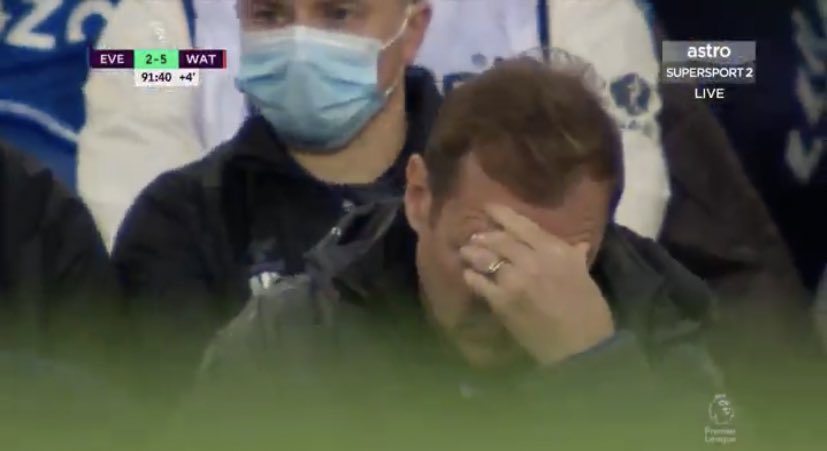 “She said ‘I’ll show you a picture, a picture of tomorrow
Nothing changes, it’s all sorrow’ ”

Sometimes there are moments in life, as in football where you witness something that irrevocably changes a dynamic. For the most part I subscribe to a big picture, long term analysis of trends and underlying numbers, for both life and football, but occasionally you get moments that hint at a corrosivity slipping into an organisation. The alternative to this might be where you achieve a proverbial enormous leap forward. Learning tends to be lots of underlying foundational work, with the occasional leap forward.

In truth, for Everton over the last 25 years there have been precious few of the latter. What you might call the Kevin Brock moment, where fate, fortune and underlying trends tend to coalesce around one another into a lightning bulb moment. For younger readers, the specific moment was a wayward backpass in a cup game against Oxford which gifted Everton an equaliser with 9 minutes left to go. Everton would go on to reach the final of that competition and would win the FA Cup later that season. At the time of that game, they were 18th in the table with 28 points from 23 games seemingly heading nowhere fast. They would collect 34 points from the remaining 19 games in that season (showing form that would have seen them finish 3rd across an entire season). As we all know, the rest is history. The critical point though, is quite a small moment seemed to turn the tide of a much bigger discourse.

Over recent times, there appear to have been a number of the opposite moments-horrorshows you may call them- superficially small moments that seem to hint at a wider change in trend. I think back to Marco Silva’s Everton, who took the lead with 15 minutes to go at Brighton before conceding 2 goals in the final 10 minutes to lose the game. Another might be Roberto Martinez’s Everton, leading by 2-0 against West Ham to concede 3 goals in the final 12 minutes to lose the game. Going a bit further, there was a collapse in early 1997, where Joe Royle’s Everton led going into the final 16 minutes at high flying Newcastle, before conceding 4 goals in the final 16 minutes to lose 4-1. All 3 were defeats, shambolically snatched from victory in the midst of a frenzied and uncontrolled end to the game. While I was too young to attend the game in 1997, the above 2 gave me the same feeling- that the manager in place was going to have to work very hard to regain the trust of the supporters, players and wider milieu around the club. Simplified, it was on those occasions that I came to the view privately that the managers had no future at the club.

What is perhaps most telling, is that in each of the above collapses, the manager would be gone within 9 league games. Martinez lasted 9 league games after the West Ham debacle (partially helped by an FA Cup run crammed into the sequence). Joe Royle would last only 7 games following the said Newcastle defeat, while Silva would last the shortest, only 5 games after the Brighton defeat he was gone. I don’t write any of this to state that is what I want to happen, but merely as a historical context for Saturday’s horrorshow. From the outside it looked the sort of game whereby not only fans, but players lose any faith in the management of the coaching staff, which is an untenable situation to push forward with if it is not rectified.

While I want to avoid going into any specific details of the game itself- as others will do so in more detail and clarity than I can, I will make a few broad comments that can hopefully find some consensus and perhaps indicate some urgent remedies that the Benitez staff would need to adopt if he wishes to avoid a similar fate to the aforementioned managers. I thought we were broadly ok for 70 minutes and had performed well. I found the substitutions extremely bizarre, which have been compounded by the managers comments that Gordon-Everton’s brightest and seemingly fittest players is not fit to play 90 minutes (with the inference that the remaining players are). I felt the Iwobi substitution, at a time where we were losing control in midfield, in a game we needed to see a very odd choice. I find the lack of involvement for Gbamin inexplicable (if he is not able to do 15 minutes in a rearguard action, what is the point in him being in the squad?). Ultimately to concede 4 goals, in 12 minutes, to a very poor Watford side is to me worse than any of the above collapses-which greatly contributed to the speedy demise of managers who often had far greater credit in the bank than Benitez.

The concern for Benitez and Evertonian’s alike, is that the rot is allowed to set in quickly. There have been warning signs earlier in the season- we have lost leads at Leeds, collapsed at Aston Villa and have been a bit too easy to play against in a number of games. While Watford was a lightning bolt out of the blue, the underlying conditions have been in existence for those wanting to look. You will not survive in the PL if you cannot adequately defend set pieces, or if you are prone to giving goals away in clusters. At present we seem to be doing both.

It is however important to contrast these worrying aspects, with the acknowledgement that there has been a lot of positives thus far too. 14 points from 9 games is a reasonable return and the attacking play has been much improved under Benitez. Some of the attacking play and sequences we have seen are as positive as anything witnesses since Martinez left the club, yet like with Martinez they are increasingly counting for little when simple defending advantageous positions. The optimal goal is to keep the attacking output and improve the defensive performance, the realistic goal may be that we have to sacrifice aspects of our attacking play in order to solidify the side defensively. It may be a case that we need to lose 10% of attacking prowess to gain 25% defensive solidity. That may mean, finishing a game that you are leading, with Iwobi coming on to join an exhausted Rondon, Townsend and Richarlison is just too open, even against the poorest teams in the league. This may be especially so for the period Doucoure is injured for, as both Allan and Tom Davies seemed to visibly tire as the game went on and both lack the athletic ability to perhaps maintain an optimal performance.

As indicated above, there are wider questions that emerge from this. What is going on with Gbamin is one of them. It is one thing to state he is not fit enough to start a match, but again if he is not going to be able to come on and add additional height and structure to a game in the final 15 minutes, there is no point him being in the squad. I cannot see a scenario where he will be utilised if Saturday’s scenario is not deemed applicable for him. Likewise there surely has to be some consideration for Mason Holgate, either as a 3rd centre back or in midfield to help see a game through. While there are structural issues with our set piece defending, adding additional height to the team will certainly help reduce these issues. It’s not to say Holgate is a world beater, but anyone witnessing Keane and particularly Godfrey’s performance in the final 15 minutes on Saturday cannot turn their nose up at Holgate. If Gbamin is not going to be fit, there also needs to be some consideration of Tyler Onyango, who at 6 ft 4 is a natural player who can sit in a midfield and protect a defence if this is what is required. Again it is worth reiterating none of these options are ideal, but we are working on the basis of the best fitting solution to help us through turbulent waters.

In a broader sense, Benitez needs to address the situation in a similar manager to the way Ancelotti immediately did when taking over at Everton. Nobody would accuse Ancelotti of being a defensive manager (a label that fits the more turgid sides Benitez has managed far more aptly) but he understood that the team was soft-centred and before anything could be achieved this needed to be resolved. I appreciate it is currently somewhat in vogue to point out what Ancelotti did wrong, but there are valuable lessons being lost as to what he did right. In the 6 games before his sacking Silva’s Everton conceded 14 goals, following Ancelotti’s appointment his 1st 6 games yielded just 5 goals against. For the remainder of the season that ended up being 28 conceded in 21 games (including a heavy 4 goal defeat at Chelsea). In the following season we would concede just 48 from 38 games (again including 5 on the final day at Manchester City). So while at times it was turgid, uninspiring and frustrating, it did at least give us a chance to pick up points in most games without playing to our optimum. This intuitively feels the sort of sacrifice that Benitez will need to make to steady the ship.

It is also worth pointing out, Ancelotti too faced an injury crisis in the 2nd season, a loss of form and a tough run of fixtures, which turned out to be one of the more positive runs of the season. Wins at Leicester and Sheffield United were matched with home wins against Chelsea and Arsenal without a single recognised fullback available for a large chunk of the season. It is a manager’s job to find the best way to adapt.

This is not to re-write the history books, or whitewash much that was poor about last season either, but to at least provide something of a template for what options a manager has when faced with some difficult moments. The fixtures do turn a little for Everton, though recent evidence has found being the underdog, against tougher opponents has brought the best out of the team and the supporters. Whatever the feelings are towards this group of players, it is hard to avoid the conclusion that they need more support in games, and there may need to be more pragmatism in outlook when ahead, and more organisation on set pieces in games. The hope will be that the manager heeds whats should be quite a stark warning from Saturday, and ultimately learns the correct lessons that need to be taken from it.

In spite of the media narrative that some are trying to spin, Evertonian’s for the most part have been overwhelmingly generous to Benitez, and continue to be able to see the bigger picture in terms of both his appointment, but also the wider situation of the club. Everyone wants to see him succeed, and any change in direction at this point could be very damaging. There of course has to be a balance though, that you cannot be losing many games by conceding 5 goals in home games, and honestly anticipate this does not have a bearing on fan sentiment.