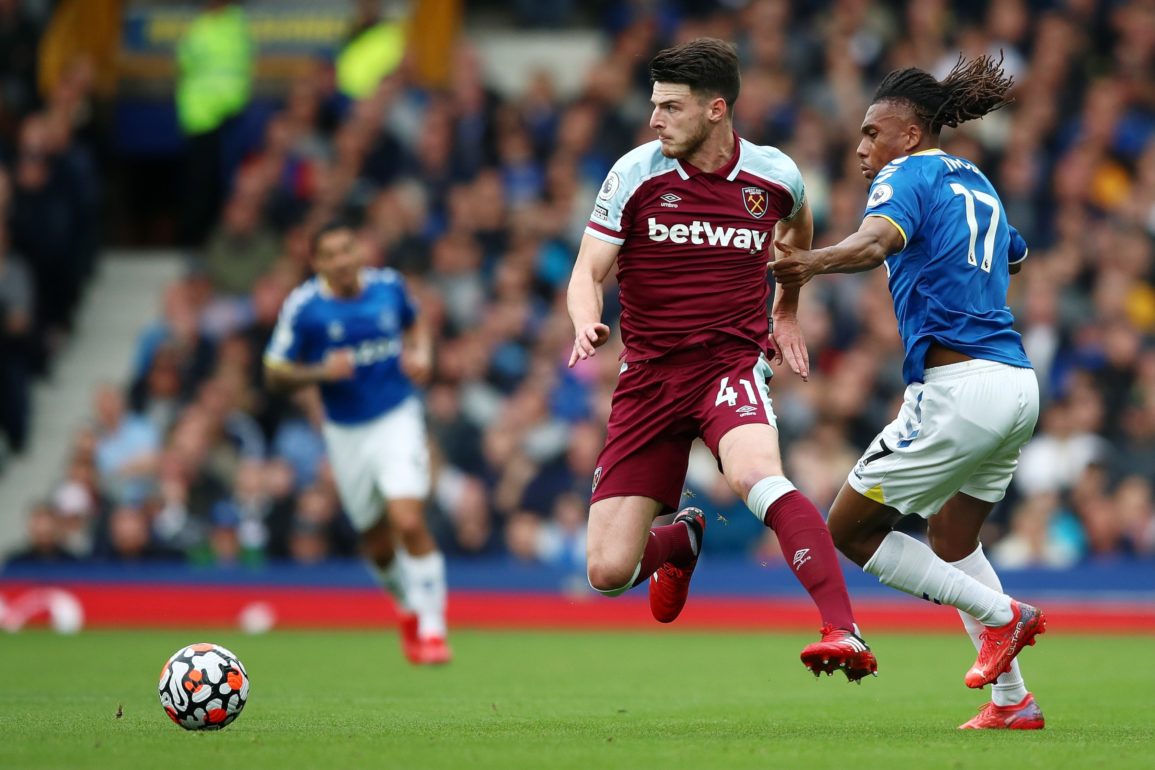 Disappointment for an almost full house Goodison as the Blues went down for the first time at home this season, a glancing header from Ogbonna with just over fifteen minutes to play proving the deciding moment.

After the boredom of the international break, it was back to Premier League action for the Mighty Blues with a mouth-watering clash against a Hammers side managed by former Blues boss, David Moyes.

Blues boss Rafael Benitez was hoping the two week break would enable Seamus Coleman and strikers Richarlison and Dominic Calvert-Lewin to fully recover from their injures and challenge for immediate returns to first team action. And with Lucas Digne having withdrawn from the French squad with a hamstring strain, a return for skipper Coleman would likely see Ben Godfrey switch sides to cover for Digne at left back.

In Fridays’ media briefing however, the manager sprang something of a surprise when he announced that both Seamus Coleman and Lucas Digne would be available to face West Ham but, “Richarlison and Calvert-Lewin are closer but, will not be available for this game. Yerry (Mina) is coming back (from Colombia), he’s played a lot of games but hopefully, he will be here and available to start the game.” Benitez added that Andre Gomes and Fabian Delph are, “still working, trying to return as soon as possible but, still not available.”

West Ham arrived at Goodison sitting three points behind the Blues having lost at home to late injury time winners against both Manchester United and Brentford, and having taken only one point from their last three Premier League fixtures, a scoreless snooze fest at Southampton. The East London outfit however, have made good starts in both their Carabao Cup and Europa League campaigns, and with the muscular Michail Antonio leading their attack, they’re a side we should not take lightly.

Moyes commented, “I actually think we’ve had a really good start – yes, we had a disappointment in the last minute against Brentford but, we’re not going to dwell on that, that’s for sure. We’re going to move on and keep being positive because rage players have done so well.”

Moyes was no doubt relishing pitting his wits against Benitez about whom he said, “I’ve got great respect for Rafael, he’s been a terrific manager and you don’t get to manage the clubs he’s managed if you’re not very experienced and good at the job.”

Our referee for this Sunday afternoon feast of football was Stuart Attwell.

West Ham had much the better of the opening exchanges with the inevitable and tedious chanting of ‘Sign on’ by their boorish travelling support. Coleman with an excellent interception denied Fornals a shot on a cross from Bowen and inside ten minutes, Antonio was booked for simulation trying to win a penalty. Benrahma Rush a first time effort to shoot high over the bar as the visitors maintained their early dominance of possession but, without causing Jordan Pickford to make a save.

The Blues first real attack came when Coleman found Rondon and he played Townsend into space on the right flank for a deep cross that sailed out for a goal kick. A cross from the left then by Digne was headed only as far as Doucoure but, his long range shot went too high.

Everton were slowly growing into the game and a ball from Allan was delightfully flicked on by Gray to find Doucoure who worked it left for Digne to find Iwobi and he saw a strong shot blocked and cleared. Allan then released Gray down the right to take on and beat Ogbonna for pace and his perfect cross into the area saw Iwobi completely miss his kick from eight yards out.

On the half hour, Fornals was the second Hammer booked, this for a foul on Andros Townsend, the set piece leading to Digne and Townsend playing Iwobi in on the left to get to the byeline and cross with Fabianski pawing the ball to safety. Better from the Blues as Gray and Townsend combined again on the right for the latter to cross only for the header from Doucoure to go wide of the far post.

West Ham thought they’d opened the scoring on 34 minutes as Pickford saved low to his left from Bowen but, Soucek was ruled offside as he netted the loose ball into the roof of the goal. Goodison snarled in anger as Antonioni bundled Godfrey over and the referee awarded the visitors a corner that Rondon headed behind, and from the follow-up set piece, Doucoure and Godfrey got good blocks on shots before Fornals curled a third effort high and wide.

Everton won two late corners that came to nothing and the fourth official chose not to add on any additional time.

No changes by either manager during the break and the first effort went the way of the Blues as Doucoure fed Gray to take on Johnson and cross low right through the penalty area and out for a goal kick. Great play from Coleman led to a switch left for Gray to play Digne in for a cross that Iwobi controlled, span and shot with the effort being deflected behind for a corner that West Ham cleared. A deep cross from the right reached Rondon who couldn’t direct his header on target but, a brighter start to the second half by Everton.

West Ham failed to make the most of two corners with an effort from Coleman in between failing to force Fabianski into a save. Approaching the hour mark, the game was still delicately poised with an increasing feeling that one goal might settle the outcome.

A bit of luck for the Blues saw Allan find Gray to play in Rondon to win a corner that the visitors smuggled clear and eventually leading to a shot from Iwobi going across the face of goal and narrowly wide. Nice play by Keane to chip a ball over the top for Rondon who laid it off for Gray to find Townsend, his chipped cross to the back post sadly not anticipated by Coleman.

Twenty minutes to play and would either manager make a telling change to wrestle an advantage from an evenly contested game? A long ball down the right found Iwobi who gave it Townsend for a cross to the near post where Rondon beat his marker to the header but, an easy gather for Fabianski.

West Ham were fortuitously awarded a corner that Bowen swung in and Ogbonna got the glancing header inside the back post to break the deadlock on 74 minutes.

Everton responded with Townsend seeing a low cross turned behind for a corner while Soucek writhed around claiming Rondon had fouled him in the build-up move. Changes by both sides on 79 minutes saw Dawson replace Soucek and Anthony Gordon replace Alex Iwobi.

Rondon did well to win another right wing corner as Goodison pleaded for the Blues find an equaliser, the cross from Townsend met by Godfrey but, his volley went over the bar. West Ham were happy to slow things down and gradually work their way forward to win a corner that caused some panic in the Blues defence before it was put behind for another that Rondon headed clear and Rice fired miles over the bar from distance.

Lanzini replaced Benrahma for the closing minutes with Everton in need of a moment of inspiration but, it needed an acrobatic fingertip save from Pickford to deny Bowen at the expense of another time consuming corner.

Into four added-on minutes and Gray saw a shot blocked and a late cross from Gray found Coleman but, he couldn’t direct his header to trouble Fabianski. Rondon won another late, late corner that Ben Godfrey met, sadly the last play of the game saw his header clear the crossbar.