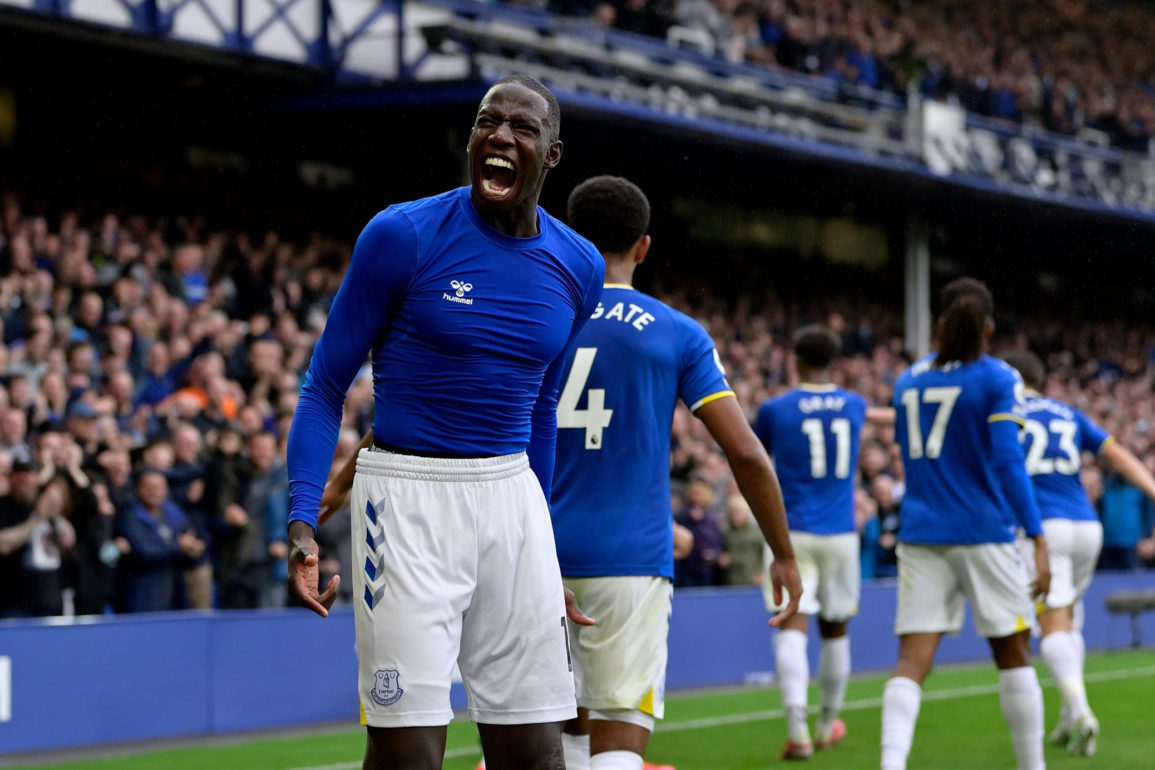 A second half fightback saw Everton come from behind to win and get the Benitez era in charge off to a slightly nervy but ultimately flying start on goals from Richarlison, Abdoulaye Doucoure and Dominic Calvert-Lewin.

“Welcome back my friends to the show that never ends,” was how the late, great Alan Freeman used to introduce 70s supergroup Emerson, Lake and Palmer to open their concerts. Sirens and the ubiquitous rendition of Z-Cars heralded the dawn of another Premier League season and quite possibly for Everton Football Club, a critical one. Following a summer of some turmoil that saw the departure of Carlo Ancelotti, Everton turned the reins over to Rafael Benitez in an appointment guaranteed to raise eyebrows, hackles and even some unsavoury banners outside Goodison Park.

We don’t need to unduly labour the wailing and gnashing of teeth amongst Evertonians over the appointment, nor the apparent two-faced exit of Carlo ‘Everton are my club’ Ancelotti back to Real Madrid, the minimal transfer activity, the non-departure of several players almost universally accepted as ‘not good enough’ or ‘stealing a wage’. Whatever the scenario, the short close season of 2021 has been far from dull for fans of the Senior Club in the City.

And so to the opening game of the season – Goodison Park the venue, fans returning hopefully without any undue hitch at the turnstiles following the introduction of e-tickets, with the spectre of Covid still lingering and accounting for five players being unavailable for consideration and a need, almost a desperate need for the boys in the Royal Blue jerseys to get off to a flyer by beating Southampton.

In the build-up to this critical season, the Blues under Benitez have been to Florida successfully before being brought back down to earth with a resounding bump in a 4-0 tonking by Manchester United. Benitez, to his credit, has been very much ‘hands-on’ on the training ground with the players and moved quickly to add goalie Asmir Begovic, winger Andros Townsend and forward Demarai Gray to the squad. Official and unofficial comments from players suggest they appreciate the new managers approach to training, and as supporters, we surely have to hope that irrespective of our own personal feeling towards the Spaniard, he can produce what five managers before him have collectively failed to produce – a team that competes every game and gives us something to get excited about for more than just a couple of weeks.

Speaking in his Friday press conference, Benitez confirmed that five players were unavailable for selection but, Olympic Gold Medal winner Richarlison and striker Dominic Calvert-Lewin were fit and ready to face the Saints and he noted, “These are key players for us,” he said. “If you analyse the stats over the past year, you see Richarlison and Dominic were scoring goals. When Richarlison wanted to go to the Olympic Games, we analysed the pros and the cons – and we decided it will be a good opportunity for him, to have the chance to win. He won the medal, he is happy. He knows we need him now and knows we will try to manage his time off, his holidays, to be sure recovers quickly. At the moment, he is fine, he has been training well and he is keen to help the team.”

Asked specifically about James Rodriguez and his Covid situation the manager offered, “We have some players who are in isolation and we have to manage that. We have to be very careful, and some players have to be at home. James is one of them. I will not name too many players because I think it is better not to do it.”

Southampton were the visitors and after losing striker Danny Ings in a reported £25 million move to Aston Villa and defender Jannik Vestergaard to Leicester City, Saints boss Ralph Hasenhuttl was relieved to confirm that influential midfielder and dead-ball specialist James Ward-Prowse was fit to play as they looked to improve upon the worst opening day fixture results of any team with more than ten seasons in the Premier League.

Having lost Ings, Hasenhuttl moved quickly to bring in 24-year old striker Adam Armstrong from Blackburn to bolster his striking options and when asked if the player could make an impact having joined from the Championship, the German noted, “He is definitely coping with it, he has the same number on his shirt [as Ings did] and he doesn’t care because he knows he can score goals. It is on us to bring him in the position to go there and we know that Ingsy was here for two years until he started scoring for us.”

Our referee for the season opener was Andy Madley.

Thankfully there were no delays at the turnstiles and Goodison bellowed its welcome to the players in time honoured fashion, a tremendous welcome in particular for England’s Number One Jordan Pickford, and no adverse reaction towards the new manager.

First chance of the game came inside three minutes with Gray bursting forward and a blocked cross coming out to Allan to fire the first shot on target, McCarthy gathering safely for the visitors. A poignant round of applause on six minutes rang around the Grand Old Lady as Evertonians and Saints fans paid tribute to Jimmy Gabriel who passed away during the summer.

Keane is strongly on Armstrong and Doucoure dispossessing Walcott earned applause from the packed crowd led to Gray and Coleman combining before the former Leicester player crossed for DCL only for his header to go wide of the target but, a decent opening from the Blues.

Saints attempted to counter down their left through debutant Perraud only to be stopped by a firm challenge from Seamus Coleman, clearly enjoying playing before fans again and combining well with Andros Townsend too. Everton responded with a long ball from Pickford well controlled by Richarlison but his cross towards DCL was just too strong. Saints through Djenepo got forward and Mason Holgate was the man to halt their raid in its tracks albeit at the expense of a throw-in that was cleared.

Despite the decent start, it was Southampton who opened the scoring in the 22nd minute, Adam Armstrong on his debut dispossessing Michael Keane to race away and coolly placing his shot past Pickford.

The goal took the wind out of Everton’s sails and it came as little surprise that on the half hour, Richarlison went down in the Southampton area claiming a penalty only to see a yellow card for diving. DCL won a free kick only for Lucas Digne to hit the wall and the visitors cleared before Townsend checked inside off the right flank and crossed for DCL who again put his header just the wrong side of the post.

In the final minutes of the half, it was Southampton looking to extend their lead, Armstrong bringing a decent save out of Pickford to win a corner that Ward-Prowse fired in and Digne cleared to set up Blues raid that saw Salisu, under pressure from DCL, concede a corner. McCarthy tipped the corner from Townsend away only as far as Allan who was closed down by Adams to prevent a shot from coming in. One added minute was signalled but, nothing ensued except Richarlison taking a nasty swipe at Adams and a tad fortunate not to see a second yellow for his show of frustration, and the Blues trailed at the break with some fans reacting badly to the score by booing.

No changes by either side during the break and the Blues went straight on the attack, winning a corner via a hurried, sliced, clearance and inside three minutes they were level, as the corner was only half cleared and Townsend got the ball back into the box for Richarlison to equalise in off the underside of the crossbar, and Goodison erupted in relief at the instant response.

The mood changed as Goodison was re-invigorated despite the rain, and the lovely Gray forced Southampton into conceding another corner that led to another that McCarthy eventually dealt with. Keane who stayed upfield after the corners tried to get on the end of a cross from Richarlison, his effort being blocked, and the Blues kept the pressure on with Doucoure linking with Townsend to then get on the end of the cross that McCarthy dealt with.

Gray was causing havoc in the visitors defence, Salisu conceding yet another corner that Adams was pleased to clear to earn a moment of respite from a breathless start to the second half from Everton. Southampton finally got out of their own half to win a corner off Allan on the hour mark. Pickford rose to punch the set piece away with Digne adding the insurance touch to clear the danger.

Gray was giving the Blues a wide option on the left flank and found by Doucoure, he again drove forward with purpose only to not find DCL with his cross and McCarthy launched a Saints counter that saw Coleman concede a corner denying a shot from Djenepo, Pickford catching the Ward-Prowse set piece confidently. A lucky escape for the Blues as Walcott benefited from a rebound to cross and the clearance from Doucoure fell to Adams who unselfishly tried to feed Armstrong, Andros Townsend getting back to clear the danger.

Everton had lost some of their early initiative and Southampton has regained their composure and were coming on strong as we entered the final twenty minutes and the Blues made the first change, Alex Iwobi coming on to replace Andros Townsend after a solid home debut.

The Nigerian had an early chance to make an instant impact, not getting enough direction on his shot and the danger was cleared but, not for long as the Blues took the lead to a deafening crescendo of noise – Abdoulaye Doucoure opening his account with a terrific strike after a nod down from Iwobi to turn a fire into the top corner to send the Gwladys Street into raptures of delight.

Southampton with a double change on 80 minutes sent on Diallo and Tella for Walcott and Romeu, but it was to no avail as the Blues hot their third goal, Dominic Calvert-Lewin with a diving header from close range on a cross from Richarlison that squeezed beyond the flailing arms and hands of McCarthy, and after some nervy defending earlier in the game, the Benitez era is off to a flyer.

Yerry Mina was the Blues second change on 82 minutes enabling Goodison to give a standing ovation to Demarai Gray as he enjoyed an impressive home debut. At the same time, Redmond replaced Perraud for the visitors.

Southampton went looking for a late consolation, DCL defending to concede a late corner that led to an Everton break with Richarlison feeding the ball through for Iwobi to shoot on target and McCarthy to save, the Nigerian having made a good impact since coming on. As we approached the 90 minute mark, Anthony Gordon came on for a cameo role replacing Richarlison who too got a well deserved standing ovation from a happy Goodison.

Three added minutes were signalled and neither side could create anything of any real note but, it was Everton who left the field to massive applause, some of the summer gloom clearly lifted from the shoulders of the fans who if they didn’t like some of the defensive work, certainly enjoyed the manner of the fightback.