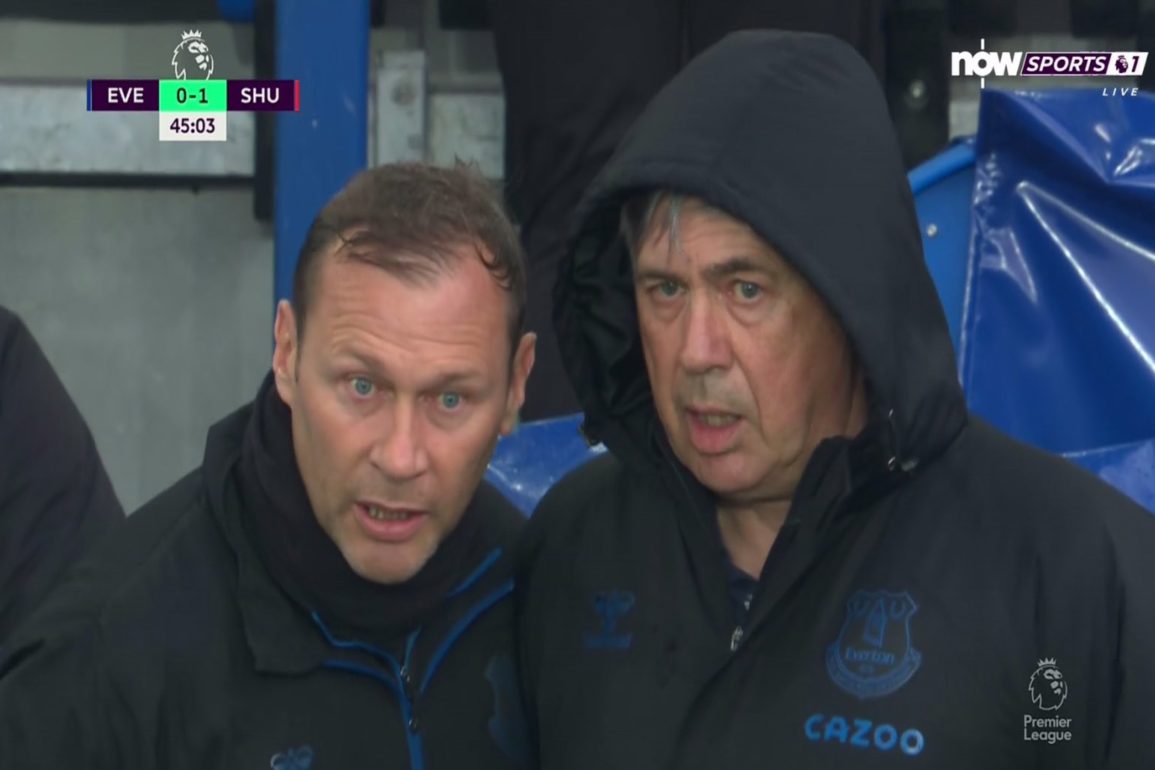 Put the passports away lads and lasses, as after recording a miserable ninth home loss of the season, there’s simply no way this Everton side will qualify for Europe next season. Credit to Sheffield United, they deserved the win for their effort and application.

Already relegated Sheffield United were the Blues penultimate home game of the season with Everton desperately needing a home win and ideally by more than just one goal. However with the club, manager and (most of) the supporters desperate for European footie next season, the question remains – given they’ve failed to make the most of so many opportunities to secure it already – do the players want European football next season? The goalless draw at Villa Park was the latest in a litany of disappointments and even moreso given the lions share of this seasons away form.

Manager Carlo Ancelotti remains optimistic about the Blues chances and he reflected on the Villa game saying, “We tried to do everything to win, we had a good second half and pushed a lot of energy there, the first half was more in balance; the second, we created a lot of opportunities.” He continued adding, “We had some shots from the penalty box where we were not lucky enough but I am satisfied with the performance. I think we did our best and we have three games, we are still in the fight and we must try to win the last three games. We’re still in the battle. We’ve got two home games. To be in Europe, I think we need to get nine points.”

Having advised the pre-match press conference that James Rodriguez was looking at a return on Sunday and that Yerry Mina wouldn’t be available, Ancelotti was quick to praise the first season with Everton of Ben Godfrey when he said, “He showed fantastic quality and defensive ability. He is really fast and really intelligent. It is difficult to find him out of position. I am really pleased and surprised for his season. He was a fantastic signing in the summer. The best quality he has is his speed. He is really fast and really aggressive without the ball, tactically he is good and he can play all the positions in defence without any problem. He has changed position – he played left-back, right-back and centre-back – and every time he did well. I am really satisfied.”

For the already relegated Blades, the only impetus they had was playing for personal and professional pride and to try and end a disappointing campaign as best they could. And their cause was not helped by three players – Sander Berge, Oliver Burke and Ethan Ampadu – looking unlikely to play again this season. Berge recently returned from a long-term injury and won’t be risked after suffering a niggle. Burke has a foot fracture and Ampadu a pelvic issue.

Interim manager Paul Heckingbottom, who took over when Chris Wilder relinquished the reins at Bramall Lane, is looking to the future and the possibility of greater involvement. Speaking of speculation he could be set for a new strategic role as part of a behind the scenes shake-up he noted, “Stepping up, when I did that, my responsibility was to the players and it still is. If my job title changes and my responsibilities change, then I’ll change. If they don’t, then I won’t. People get employed by football clubs for all sorts of different reasons, to do all sorts of different jobs and each and every one of them is important. They all fit together, and when that happens, then you have more of a chance of success.”

With three former Blues – John Lundstram, Jack Rodwell and veteran defender Phil Jagielka – on the Blades roster, would any of them feature in this Goodison clash, we found out they wouldn’t when Heckingbottom named Jags and Lundstram to the bench and his starting line-up: Ramsdale, Basham, Egan (c), Robinson, Baldock, Norwood, Fleck, Stevens, Osborn, McGoldrick and Jebbison.

On a very wet Sunday evening (who picks and who agrees to these ludicrous kick-off times?), Jonathon Moss was our referee.

Doucoure fed by Allan went forward to feed Digne for a cross that was just too long for either DCL or Coleman to get on the end of and the Blades cleared the Blues first attack. And on the Blades first attack, they opened the scoring as 17-year old Canadian born debutant Daniel Jebbison got behind Ben Godfrey to get on the end of a powerful run and cross shot from Robinson to give them a 7th minute lead.

DCL won the Blues first corner and it came out to Allan and Ramsdale was called on to turn his low shot round his right hand post for a second corner that was too close to the keeper who caught it easily. The visitors got forward again with great purpose to cause the Blues some problems as torrential rain made the timing of tackles on a beautifully manicured and slippery pitch absolutely crucial. A quarter of an hour gone and McGoldrick fired a shot wide of the target, the visitors having had much the better of the game so far.

A good cross from the left from Digne found the head of DCL, his header falling nicely for Ramsdale to make an easy save. Holgate lofted a ball forward for Coleman to get on the end of, the ball hitting Robinson on the arm to bring weak claims for a penalty and going out for a corner that was played far too long. Sheffield got forward again with Osborn looking to find Jebbison and Godfrey cleared leading to a 50-50 in midfield that saw Basham clatter into Digne and pick up the games first yellow card.

McGoldrick saw a shot blocked by Holgate and it came out to Fleck who struck a powerful shot that Pickford turned away for a corner that Keane cleared well. Everton were huffing and puffing to try and get back into the game but finding the Sheffield midfield and defence concentrating well and in determined mood.

A dreadful back pass from Holgate almost gifted Jebbison a second goal as he latched onto the ball, Pickford quick off his line to save the attempted chip over him.

The Blues should have drawn level on 36 minutes as Rodriguez found space for a shot that took a deflection over the bar for a corner and that was headed by Norwood and he cleared the follow-up corner from Digne.

Doucoure found Rodriguez for an excellent cross to pick out Richarlison who saw his header superbly parried by Ramsdale and the goalie then denied DCL on the point blank follow-up effort, turning the ball away for a corner that came to nothing.

Two added minutes were signalled and another opportunity came as Keane lofted a ball forward for Richarlison and his instant volley went high over the bar, and it was the visitors who went to the dressing room and a towelling down in much better heart than Everton.

Ancelotti acted during the interval, that had seen the rain relent, replacing Mason Holgate with Gylfi Sigurdsson, allowing Coleman to drop into his normal right back role and the Icelander to help support Rodriguez in the midfield. No changes by Sheffield United for the second half, that Everton simply had to do something they haven’t done in ages at Goodison, come from behind and win!!

The early minutes saw the visitors again looking organised, enjoying possession and trying to get forward, completely forgetting they’re rooted to the bottom of the table and will be playing Championship footie next season. Rodriguez with a couple of neat moves fed Doucoure for a low drive into the Blades penalty area and hoofed clear, Everton came again and won a corner that Sigurdsson sent straight into the waiting arms of Ramsdale.

Sigurdsson played DCL in for a shot that was deflected out for a corner that saw nothing come of it and a cross from Digne from the left flank sailed aimlessly out of play. Basham with a strong run down the right won a foul off Allan, the free kick into the Everton easily claimed by Pickford. And JP was quick off his line to head a ball forward into touch as Sheffield picked off another poor pass in midfield.

Rodriguez to Doucoure to Coleman and Egan got the clearing header in ahead of DCL arriving, and we passed the hour mark with the Blues still trailing and not really making serious inroads into the Sheffield defence. Fleck drew a foul from Rodriguez to give the visitors a free kick on the left that was fired to the back post where Egan rose but couldn’t direct his header on target. Rodriguez was booked for a second foul in quick succession and from the right, Fleck swung it to the back post for Egan to head back across goal where DCL got the important header away to safety.

Doucoure with a neat flick to Sigurdsson to then find Richarlison whose shot to the near post was turned away by Ramsdale for a corner that produced nothing. Sheffield won their second corner and Fleck found McGoldrick for a free header that he failed to direct on target. Stevens found McGoldrick for a shot that was deflected for a corner and that resulted in more confusion at the back before a free kick for a foul on Pickford was awarded.

Everton made a second change with Bernard replacing James Rodriguez on 78 minutes, could the diminutive Brazilian provide the Midas touch? And Andre Gomes came on too replacing Abdoulaye Doucoure.

Baldock was booked for dissent following a foul on DCL with ten minutes remaining, ten minutes to make of break the Everton season. Basham with two headers clearing the cross from Digne, and the same defender then blocking another cross out for a corner that saw McGoldrick head clear. It really was now or never for Everton, pumping the ball forward from Coleman but easily claimed again by Ramsdale.

Coleman on an overlap tried to find Richarlison with his cross, the header out picked off by Bernard but over ran the ball out of play. Everton were throwing everything they had forward but in all honesty, never looked like breaking down a Sheffield United side who had far, far outperformed them.

Three added-on minutes were announced and Robinson picked up a yellow card for the visitors as they headed towards just their second away win of the season. Richarlison won a late corner that saw Sigurdsson find the head of Godfrey who couldn’t direct his effort on target. Pickford with one more mighty ball upfield saw the ball reach Gomes for a cross that was too strong and even though Bernard got it back into the area, Ramsdale in the visitors goal was fouled and that was that.