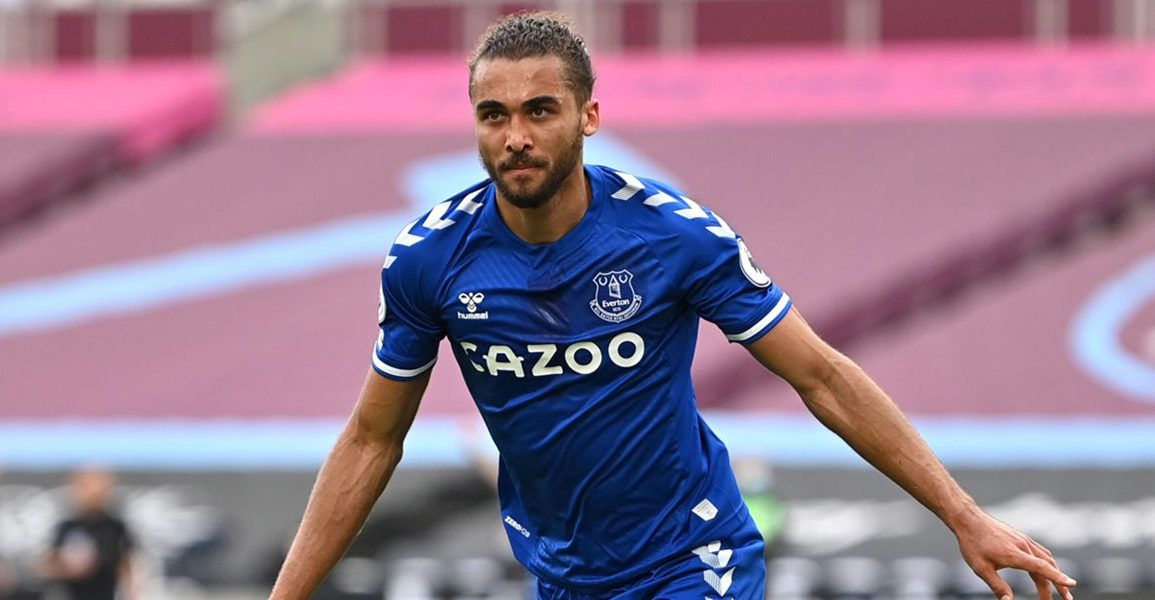 European hopes rekindled with another away win.

An excellent first half strike by Dominic Calvert-Lewin and a fine team effort gave Carlo Ancelotti his first win over David Moyes and the Blues their fifth win in London and eleventh away from Goodison this season to keep their European aspirations alive.

Was the London Stadium to be the venue for Carlo Ancelotti and Evertons’ ‘Last Chance Saloon,’ to make European football for next season – surely nothing other than a victory over David Moyes and his West Ham would suffice?

The Londoners came into this fixture still harbouring dreams of reaching the coveted top four places and possible Champions League qualification having beaten Burnley at Turf Moor last time out and with former Blues boss Moyes having stated after that win that ‘failure to qualify for Europe would be disappointing.’ The Hammers will be boosted by the return to training of captain Declan Rice although Sunday’s game came too quickly for his return from a knee injury. But with Aaron Cresswell and the dangerous Mikhail Antonio both having made successful comebacks against Burnley, the Irons went into the game looking for a league double over Everton having won at Goodison back on New Years Day.

Hammers Czech international Vladimir Coufal looked forward to the game saying, “We have four games to go, know our position and we will try to do everything to reach fourth place to be in the Champions League for next season. I think our mentality is good and it’s a winning mentality. Our goal on Monday was to win the game and we reached this goal. We believe we are able to win, even when we go a goal down, so it’s always about mentality and never giving up. Sunday will be a different game. I expect a totally different game so we have to hope we play as well as we did at Burnley, we know this game could be a key for fourth place, so we hope we are able to win.”

Knowing a win was an absolute must, Everton boss Carlo Ancelotti was boosted by the quick recovery of influential midfielder Abdoulaye Doucoure although the continued absence of James Rodriguez remained a concern, as he confirmed on Friday, “For this weekend, we have Doucoure back. After the injury that he had, he has recovered well. He trained with the team and he is available. We will not have James [available]. He had a little problem in the warm-up before the game against Aston Villa. He didn’t train this week with the team, he trained alone. It is a little problem. He is starting his proper rehab and he is going to train at the start of next week.”

Doucoure brings energy to the Everton midfield and his recovery and return to selection couldn’t have come at a better time for Ancelotti who added, “It is true, he is one of the most important players. With Doucoure, we have had some fantastic results, without him we had more problems. It is really important [to have him back] because he showed fantastic quality. He has helped the team a lot when he has played. It was a great surprise to have this kind of player. He was a really good signing and I hope he can show his quality in these few games we have before the end of the season. He put a lot of energy in midfield and to have him back for the next game will be really important.”

A victory would not only boost the Blues European aspirations, it would also set a Premier League record for the club of eleven on the road and on the back of the loss to Aston Villa he noted, “I am sure the reaction will be fantastic for the game against West Ham. We were really disappointed [with Aston Villa performance and result] but worked all week to prepare for this game, to have a good feeling and to try to win. At the end of the season, everything is more important, all the teams have their targets. There will be more concentration and energy, it is always the same, nothing changed. So, be focused and, above all, be confident.”

In charge of proceedings on a pleasant afternoon in the capital was referee Stuart Attwell.

A rather drab opening couple of minutes saw confirmation of the Blues employing a back three in order to allow Coleman and Digne to play wide of Davies and Allan in midfield and hopefully to push forward on the flanks to support the front three.

A Sigurdsson free kick saw Diop concede the first corner and West Ham were lucky to get it away for a second corner from right that Digne swung in and Soucek put out for a third, that Sigurdsson played too deep and DCL was unable to do anything with it.

The Hammers first attack in the 12th minute saw Antonio take Godfrey on for speed only for his cross into the box to be easily dealt with by Digne. A decent passing move by the Blues ended with a poor cross from Digne before Allan found Richarlison with a ball over the top, Richy winning a corner on the right that Digne put too close to Fabianski.

Tom Davies got a lecture from the referee for a challenge on Soucek and then did well to get back and deflect a cross from Fornals into the waiting grasp of Jordan Pickford. Antonio with a move inside off the left flank to escape Godfrey tried to find Lingard through the middle, Keane clearing comfortably.

Everton opened the scoring on 23 minutes as an overly patient build-up eventually led to a great ball forward from Godfrey for Dominic Calvert-Lewin to run on to, beat Dawson and then Fabianski with a fine low shot into the far corner.

Benrahma had a chance to immediately bring the Hammers level when found by Lingard but he put his shot wide of the target. Fabianski did well to tip a curling free kick from Sigurdsson away for a corner that came to nothing. West Ham won their first corner and it was DCL defending well who headed clear, Lingard then bending a follow-up effrot wide of the far post.

DCL might have done better with a header from another Sigurdsson corner in the 32nd minute ahead of Davies getting another lecture for an alleged foul on Lanzini. A long ball from Pickford was flicked on by DCL and Fabianski did well to block a Richarlison shot as he turned away from Diop.

Into the last ten minutes of the first half and West Ham tried to inject some more pace to their play but, the Blues defence were coping well before a cross from the right from Coufal found Benrahma with time and space to… steer his free header high and wide.

A good break by Godfrey to take a return pass from Richarlison ended disappointingly as Dawson intercepted his ball aim at DCL and Allan broke up the West Ham counter. Lanzini was hurt and limped off to be replaced by Jarrod Bowen shortly before the interval. Coufal got a bang on the head from Digne trying to get to a long clearance from Pickford and two added minutes were signalled that neither side could do anything with, and the Blues led at the break.

No changes of personnel by either side during the half time break with pressure on the home side that might leave gaps for the Blues to exploit. A raking ball forward from Keane to Digne saw him cross first time and take DCL a little by surprise. Five minutes in and Cresswell went down in some pain as Everton looked to break, the referee then awarding West Ham a free kick having adjudged the challenge from Godfrey to have been a foul.

West Ham were enjoying more possession in the early minutes of the second half with Everton happy to soak up the pressure, defending competently and denying the home side any clear sight of Jordan Pickfords’ goal. West Ham made a second change on 59 minutes, the struggling Cresswell replaced by Ryan Fredericks.

Everton had a lucky escape just past the hour mark as a West Ham attack saw the ball come to Coufal in space for a shot that beat Pickford only to rebound to the Blues keeper off the far post. Mina went down and immediately looked to the bench for Mason Holgate to replace him with Godfrey moving to the middle and Holgate taking the right side of the back three.

Everton were foiling West Ham really well, Coleman, Holgate and Godfrey all thwarting attempts to get beyond them. A foul by Allan gave the home side a free kick taken by Lingard and Tom Davies cleared the ball easily as West Ham prepared their final substitution. A fine tackle by Keane on Antonio brought another West Ham move to an abrupt end and inside the final 20 minutes, Soucek saw the games first yellow card for a foul on Richarlison.

Benrahma was replaced by Yarmolenko with 18 minutes to play, Moyes needing to add some more firepower to his side if they were to get back into the game. Lingard was lectured and booked by the referee for a show of petulance as frustration crept into the Hammers team.

Allan breaking up another West Ham move released DCL and with Richarlison pulling a defender out of position, DCL looked to find Sigurdsson who couldn’t get a shot away under pressure from Lingard.

Allan picked up the Blues first yellow card ahead of West Ham winning a corner on their right, Holgate and then Keane with clearing headers. Keane then climbed with Soucek and did enough to make the Hammers player send his header well over the frame of the goal.

Ten minutes to play and DCL caught Dawson with a stray elbow and then getting back to defend a West Ham corner with a solid clearing header away. Seamus Coleman disagreed in no uncertain terms with Coufal claiming a foul and Everton prepared to make a second change. And on 83 minutes, Josh King replaced Richarlison, who as usual didn’t look best pleased at having been withdrawn. And the Norwegian was straight into the action finding Sigurdsson and then getting to the back post to get his head to a cross from DCL. Fabian Delph joined the action with five minutes to play replacing Gylfi Sigurdsson.

West Ham continued to push forward but, the Blues defence were in no mood to surrender their lead, Coufal blazing high and wide as four added minutes were announced.

Everton defended excellently and West Ham simply could not find a way through, and it was another satisfying road trip for our Mighty Blues.