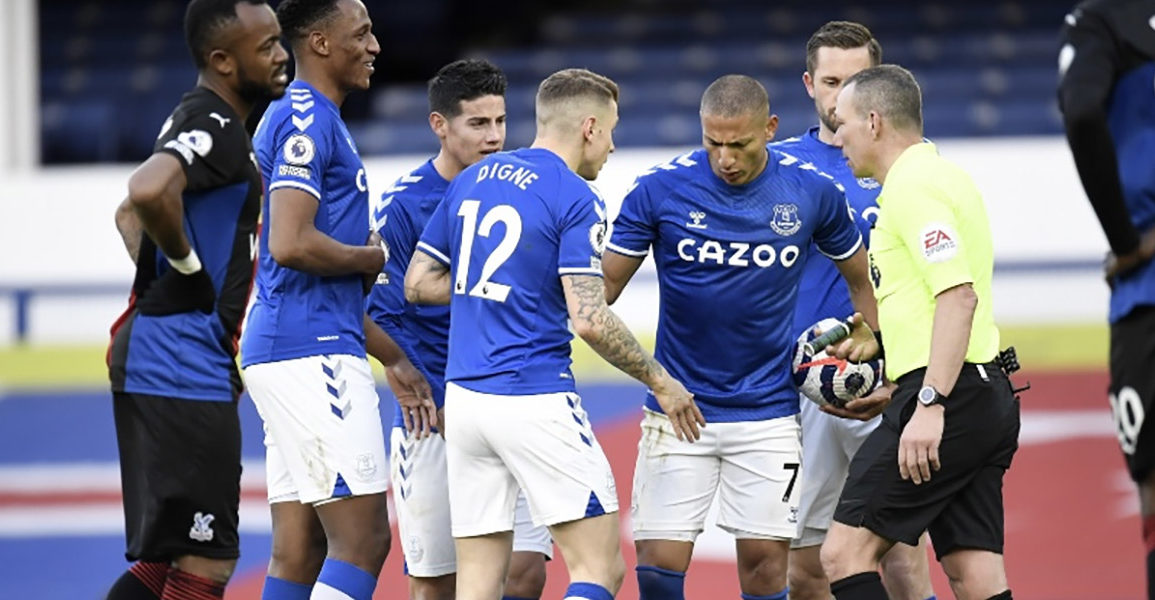 Despite creating a host of decent chances, Everton could only convert one and were made to pay for their lack of clinical finishing as Palace bagged a late equaliser and threw another spanner in the machinery of the Blues European ambitions.

April is upon us with ten games left for Everton to secure the necessary points to see the club return to European competition in season 21-22. Ten games to rescue a season that started oh so brightly and at times has plunged us into despair. It’s been a season that’s raised hopes and now it’s time for the team to really deliver.

It’s a ten game season now and there can be no more lethargy, everyone picked to wear the Royal Blue has to go out and give their absolute all – no more coasting, no more taking the easy way out, time to be bold, time to be brave and most of all, time to deliver.

Crystal Palace were our opponents in Game One, Easter Monday evening under the lights at Goodison – the Eagles needed to be downed and downed hard. Two of the games most respected managers going head to head with one chasing Europe, the other looking for a top half of the table finish, there was a lot to play for both Carlo Ancelotti and Roy Hodgson.

With ten days to prepare for this fixture, the Blues boss knew that there was still serious work to be done. “We have to improve the consistency, we are a little bit up and down – although, less than in the past,” he noted before expanding, “Also, we can improve the quality of our football. We want more control of the game and more efficiency in possession, this is the technical aspect. The other aspect is the mental consistency, to be at a high level in every match.”

In preparing to face Palace, the boss knew he would definitely be without Jordan Pickford, Bernard, Abdoulaye Doucoure and Fabian Delph but, was delighted to advise in Friday’s pre-match briefing that James Rodriguez and Robin Olsen were available and that long-term absentee Jean-Philippe Gbamin was also in contention for selection. “Gbamin is in good condition,” Carlo advised adding, “It is really good news. He trained this week and last week. He did well and he feels comfortable. I think the medical staff did a fantastic job with him. He is ready to play. He will put physicality and quality into the squad – and a strong desire to play. It is like we have a new player. We are really pleased to have him back. But we have to consider the fact he didn’t play for at least one year and a half, so I don’t know if he is going to play on Monday but, for sure, he will be available.”

Palace, a bit like Everton, have endured some indifferent form of late, encouraging wins at Newcastle and Brighton negated by heavy defeats by Burnley and Spurs the most obvious up and down results.

And like Ancelotti, Hodgson was pleased to welcome his international players back and to report no new injury concerns. “There’s only one we haven’t yet seen but we believe he’s fine, and that’s Cheikhou Kouyate. He had a longer journey than the others,” he advised the media before adding, “I think the only player we’re likely to get back is Tyrick Mitchell, although we’re still assessing James McCarthy and Nathaniel Clyne.”

Hodgson also touched on Connor Wickham, who impressed in outings for the U23s side last month. “To get in the team, he has to keep proving his fitness and working hard. He knows that in the centre-forward position we do have options.”

The veteran manager, and one of the games nice guys, whose contract at Selhurst Park expires this summer wouldn’t be drawn as to his future, preferring to concentrate on his game preparations that ultimately led him to naming his starting line-up: Guaita, Ward, Kouyate, Cahill, Van Aanholt, Milivojevic (c), Riedewald, Zaha, Eze, Ayew and Benteke.

Our referee on a breezy, cool evening was Kevin Friend, who was in charge at Selhurst Park too.

Lucas Digne took an early knock in the face from the stray arm of Ward, the French fullback looking to push on down the left flank with Mason Holgate providing the cover in a back three formation to begin the game.

Palace with the first attempt as Zaha picked up a loose ball to see his shot deflected behind for a corner from the right, Eze firing the set piece to the near post where Richarlison headed clear and the Blues broke quickly to spurn a glorious chance as Gomes pressured Milivojevic into an error and played in Richarlison who chose to unselfishly look to find DCL when he could and should have taken a shot himself and the chance was lost.

Ten minutes gone and Rodriguez picked out Digne in space, the cross disappointingly went straight into the arms of Palace keeper Guaita. The Blues weren’t yet into their stride, passes going astray and on the quarter hour, Yerry Mina saw the first yellow card as Palace looked to break into the Everton half. The game was scrappy with Palace looking the more direct when in possession, Everton taking far too many touches and sideways passing slowing their forward movement.

Eze and Ayew played a neat one-two in the Everton area with Eze forcing Olsen into the first real save of the game, Everton responded with a long ball from Holgate finding DCL whose shot was charged down and cleared by the very quick off his line Guaita. Coleman got away from van Aanholt to cross for Richarlison to head towards the top corner only to see his effort go just over the bar.

Gomes robbed Ayew to put Richarlison clean through, he jinked to his right to line up the shot and again saw the effort hit the onrushing Guaita and the Palace keeper gathered the second effort – a third decent chance for the Blues and the goalie had prevailed on all three. Holgate sent a find cross field ball out to Coleman who saw his cross find Rodriguez but he couldn’t keep his shot down and it cleared the bar.

Just before the half hour mark, Gomes went down holding his left ankle and Gylfi Sigurdsson immediately stripped off to replace the Portuguese who limped off somewhat gingerly. A collision between Davies and van Aanholt saw the Palace player come off the worse before limping back into action. Lucas Digne was the second Everton booking for a tackle on Ayew.

Holgate got a good block on a shot from Benteke to see the ball loop high for Olsen to gather with Palace appealing in vain for a corner. A period of Everton possession led to Richarlison winning a free kick just outside the Palace area with four players seemingly wanting to take the set piece with Richarlison finally taking it and bending it high and wide of the target. Into the final five minutes of the half and another decent passing move led to Rodriguez letting fly, his low shot going wide of the far post. Everton were creating chances but not finding too many on target and nothing yet of sufficient quality to beat Guaita. Another decent passing move led to a free kick that saw Rodriguez curl a great cross to find the head of Richarlison but again, the header was just too high.

Two added minutes were announced and played out with no further goal threat from either side, a half that saw Everton create a number of very good chances and fail – worryingly – to take even one of them.

Neither manager made any changes during the interval but we would hope Carlo Ancelotti had words with his players about being wayyyy more clinical with any chances they create in this second half, and Rodriguez floated an early free kick, for a foul on Richarlison, that went straight into the arms of Guaita. A good solid clearance by Holgate prevented Eze from getting a shot in after Palace had worked the ball forward.

The next Palace attack saw Coleman get back to concede a corner that Palace wasted, Everton countered with Cahill deflecting a Sigurdsson shot away for a corner after Rodriguez had found Richarlison and he fed Digne for the cross to find the Icelander – the corner from Rodriguez evading both Richarlison and Mina who seemed to get in each others way.

On 56 minutes, Everton finally converted as a flowing move started by Rodriguez to find Digne saw him play a one-two with Richarlison and find Sigurdsson whose shot was parried and Coleman collected wide and was patient to feed James Rodriguez to put his shot in of the near post.

The Blues should have doubled the lead two minutes later as Richarlison again played in DCL and Guaita again stood firm to deny the centre forward.

Olsen parried a curling shot from Eze with Digne completing the clearance as Palace looked to draw level and reinforcing the need for Everton to remain vigilant at the back and finish better up front. Zaha dispossessed Rodriguez to get forward and despite being closed down get a weak shot away that Olsen dealt with easily. Ward to Ayew and his shot from just outside the penalty area was another easy gather for Olsen.

Palace made their first change on 68 minutes, sending on Schlupp to replace Riedewald and his first involvement was to win a left side corner off Keane, the cross eventually toward Benteke was too strong and sailed behind. Into the final fifteen minutes and Everton made their second change with Ben Godfrey replacing Seamus Coleman suggesting Everton were prepared to defend the narrow lead.

Palace made their second change as Benteke was replaced by Mateta and Everton responded a minute later by withdrawing James Rodriguez in favour of the long-awaited return of Jean-Philippe Gbamin.

DCL with a long cross from the right found Digne and his first time ball saw the shot from Richarlison turned over the bar by Guaita – definitely the Palace Man of the Match. Eze wide to van Aanholt who found Zaha to feed Schlupp, his shot going wide across the face of goal. Palace made their final change, Ayew giving way to Batshuayi.

The more positive substitutions of Roy Hodgson paid off as with four minutes left, Milivojevic found Schlupp and his first time ball to Batshuayi saw him shoot low past Olsen and inside the far post.

NOT EVEN ARSED ANIMALS