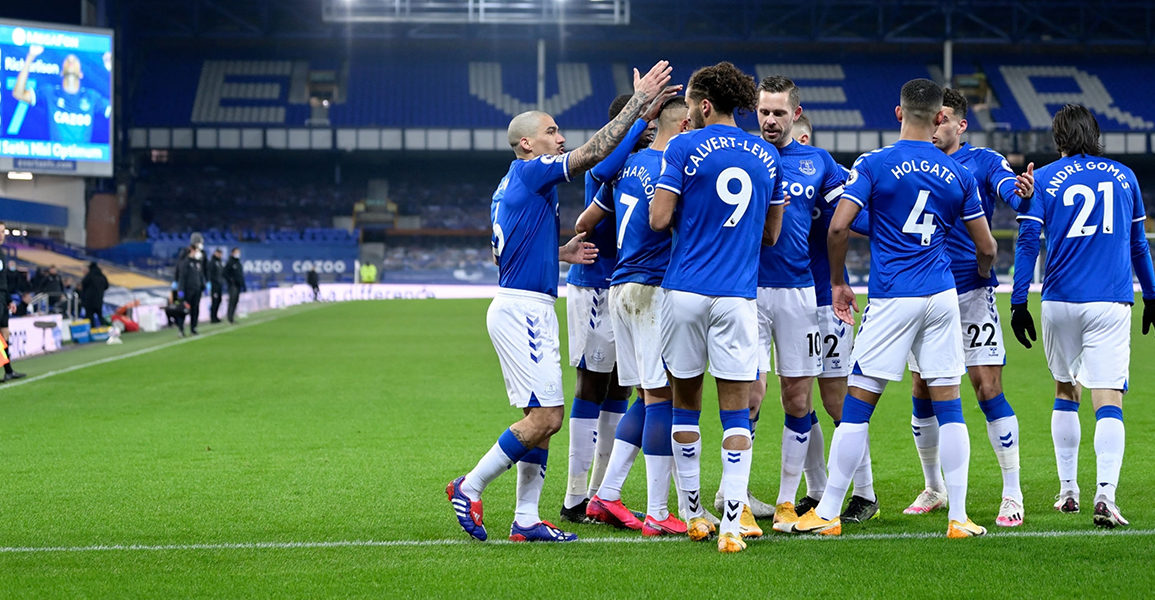 Far from a classic but, Everton win at home

An early piece of Brazilian class from Richarlison and a super late save from Jordan Pickford saw Everton secure three valuable points from a game that never reached any real height and lacked intensity and pace throughout.

Back in October, it was Southampton who inflicted the first loss on Everton this season and for that alone, we owed this lot one and fresh from a week of revelling in victory over the RS, Blues fans were demanding nothing less than a revenge win and quite a lot more wanting the Saints soundly thrashed.

With the rare pleasure of a full week to recover from the derby and prepare for this Monday night encounter, and with only Yerry Min and long-term injured J-P Gbamin unavailable for selection, Everton boss Carlo Ancelotti had options and combinations to consider before naming his team to face the Saints.

But, he was also well aware that his charges need to replicate their stunning away form when playing at Goodison, and stop taking teams too lightly as he advised. “If we want to fight for a European position, we have to improve at Goodison. The players are really focused. They know… what they have to do to be in the position to play in Europe next season. In away games, we were more focused defensively, we made fewer mistakes. At home, maybe, we were thinking the game was easier and were not able to keep the concentration we had away.”

And in a clear challenge to his players to right earlier wrongs he added, “To play against Southampton is not easy. In the past games they didn’t get a result but they played with strong intensity and big pressure. What we did at home against Fulham and Newcastle was not good enough and we want to avoid the problems we had in those games. Every game is really complicated and we have to be ready to fight in all of them.”

Southampton, a few weeks ago, were as high as fourth in the Premier League table but after reaching those dizzy heights, they’ve been on a terrible run of form taking just one point from their last eight Premier League games since they last won back on January 4th when they beat Liverpool – well, who doesn’t these days eh? This collapse on form has seen them drop ten places to 14th in the table and casting nervous glances over their shoulders at the teams below.

Coming to Goodison on the back of a 3-0 loss to Leeds, Saints boss Ralph Hasenhuttl had a number of injury concerns including losing midfielder Oriol Romeu for the remainder of the season with an ankle injury and on-loan RS Minamino out with a hamstring strain. Defender Kyle Walker-Peters, midfielder Ibrahima Diallo and on-loan Theo Walcott were also unavailable to face the Toffees.

The Austrian manager commented on the task ahead saying, “The team needs wins. Not only us. We had a very good game against them in the first half of the season. One of our best home games this season. Very dominating. We have in the moment to find a mindset for getting wins again. I know we don’t have the same team on the pitch like, in every game we have had our chances to win it.”

And on his sides recent form he added, “Last month we only did it in the [FA] cup, not the league. We have to find a way back to perform with the players we have. Yes we have a few injury problems but, we are not tired or not fit or don’t play good football. There are a few things missing and this is what we have to put on the pitch to turn things around.”

Under the lights and toting cards, line sprays, watches and whistle was our referee Martin Atkinson.

Trying to belie their recent form, Southampton started energetically moving the ball quickly looking for an opening and a couple of stiff early challenges on Richarlison suggesting they had no intention of being rolled over. The first time the Blues got forward, Forster was quick off his line to prevent DCL getting on the end of a through ball from Doucoure.

The visitors won the first corner, DCL with the clearing header that led to a counter that saw Vestergaard clear a left wing cross from Digne. And the next Everton attack saw them open the scoring as DCL won a high ball to find Sigurdsson and he nonchalantly played a lovely ball into the path of Richarlison who was cool and super smart in delaying the shot in order to get around Forster and net from a narrow angle before the ten-minute mark.

Salisu conceded a free kick with a high boot, Sigurdsson sent it low to the near post where Richarlison stooped to head and Forster pushing it behind, the offside flag preventing a corner to the Blues. Ings on a break and found by Ward-Prowse put a cross into the Everton area where Ben Godfrey put it behind for a corner, the set piece headed clear for Redmond to blaze a shot high and wide.

A good tackle by Allan saw the ball come to Andre Gomes and he curled an excellent ball into the danger area, Forster again quick off his line to deny DCL getting on the end of it. Everton were warming to the task and Gomes and Digne worked two opportunities for crosses from the left, the first cleared and the second played too long. Pickford was then quick off his line as Ings chased a through ball, the England keeper getting there first to clear.

Gomes was looking to open Southampton up down the Blues left, finding Richarlison and the ball back to Gomes then going right for Holgate who was fouled to win a free kick in a good area. Digne floated it to the back post for Holgate to head back into the six-yard area where Michael Keane headed home over Forster. VAR checked the free kick for offside against Mason Holgate and the ‘goal’ was ruled out.

Ings won a free kick wide left that Ward-Prowse took, DCL getting his head to it at the expense of a corner that Keane cleared before Djenepo worked the ball along the goal line before Pickford was pleased to gather it safely. Southampton weren’t lying down and with half an hour gone, the disallowed goal had given them some fresh impetus.

Ings and Djenepo got in each others way as Southampton pressed forward again, Godfrey getting the ball away but, Everton needed to get back on the front foot and boss proceedings. Vestergaard from behind on Sigurdsson gave the Blues another free kick for a similar position as the one that produced the disallowed goal. Sigurdsson put it into the edge of the six yard area where Richarlison couldn’t reach it and it sailed out for a goal kick – a good chance that came to nothing.

Into the final five minutes of the first half and Everton had failed to build on the early goal and Southampton were still very much in the game despite not having tested Pickford. Ings with a nice turn to find space looked to find Adams who went down falling over Godfrey in the Everton area, no penalty but another warning for the Blues to heed. Two added minutes were signalled with Everton seemingly happy to knock the ball around and run the clock down. Adams tried to play Ings in and Pickford cleared whilst slipping and referee Atkinson brought the half to an end.

Neither manager made a change for the start of the second half and the first meaningful move saw DCL charge down the middle and he won a free kick just outside the area, Sigurdsson seeing his shot hit the wall and go behind for an early Everton corner that saw DCL penalised for barging into Forster. Salisu made a meal of a challenge on him by DCL, feigning injury and lucky not to be booked.

A decent move begun by Doucoure saw some quick passing and the ball out left to Richarlison whose cross was put behind for a corner, easily cleared by Bednarek. Djenepo with a stiff challenge on Richarlison left the Brazilian writhing on the ground but, okay to carry on with the free kick finding Keane in the area and the half cleared header saw a Godfrey shot put behind for a corner that came to nothing.

Richarlison was fouled again by Bednarek, Digne with the free kick finding Keane again, his header sliding wide of the target but two quick opportunities for the England man to make his mark on the half. An hour gone and Salisu headed a Ward-Prowse corner wide of the target and Southampton made their first change, Nathan Tella replacing Salisu on 62 minutes.

Holgate got forward on the right to win a free kick, Vestergaard putting the cross from Sigurdsson behind for a corner only for another poor delivery to allow the visitors to clear easily. Digne brought down Djenepo with a rather crude tackle, Ward-Prowse sending the free kick only for Keane to clear and when the ball came back into the Everton area, Ings was caught offside.

Twenty minutes to play and Everton needed a second goal to dispirit the Saints but it was the visitors who won another corner, Adams cross put behind by Godfrey, and Redmond collecting the set piece bending a shot well wide of the far post. The game which had largely been scrappy throughout was continuing in that vein as neither side appeared able to find a cutting edge.

Redmond won another corner off Keane. Pickford with a good punch getting the ball away. A good ball from Gomes for DCL saw Armstrong booked for bringing down the Blues number nine and Southampton replaced Adams with N’Lundulu.

Into the final ten minutes and Tella was booked for a foul on Digne and a good header from DCL cleared a free kick from Ward-Prowse. Southampton were still pushing forward and Digne had to concede another corner, Holgate with a good header to get the ball away from danger. The visitors best chance came with six minutes left as Armstrong got away from a tiring Allan and found Djenepo who, thankfully, blazed his shot across the face of goal. Everton got forward through Gomes and Doucoure, the move breaking down as Doucoure and Richarlison got in each others way looking for a shot.

Alex Iwobi replaced Andre Gomes for the final three minutes of normal time and Redmond was replaced by Watts as Hasenhuttl made his third change.

Another late corner for Southampton saw Pickford make a fine save spreading himself to deny Vestergaard after a shot from Djenepo has been blocked.

Richarlison was another late change coming off for Josh King to get added on time of which three minutes were signalled. Deep into added-on time, DCL tried to wriggle his way through, Forster out quickly to gather the ball and clear downfield. Pickford with another punch didn’t get height or distance and Ings won a late, late corner that Forster came upfield for, and a hard-fought victory was won.

Get involved in the post match discussion and vote for your Everton MOTM in our Everton forum.