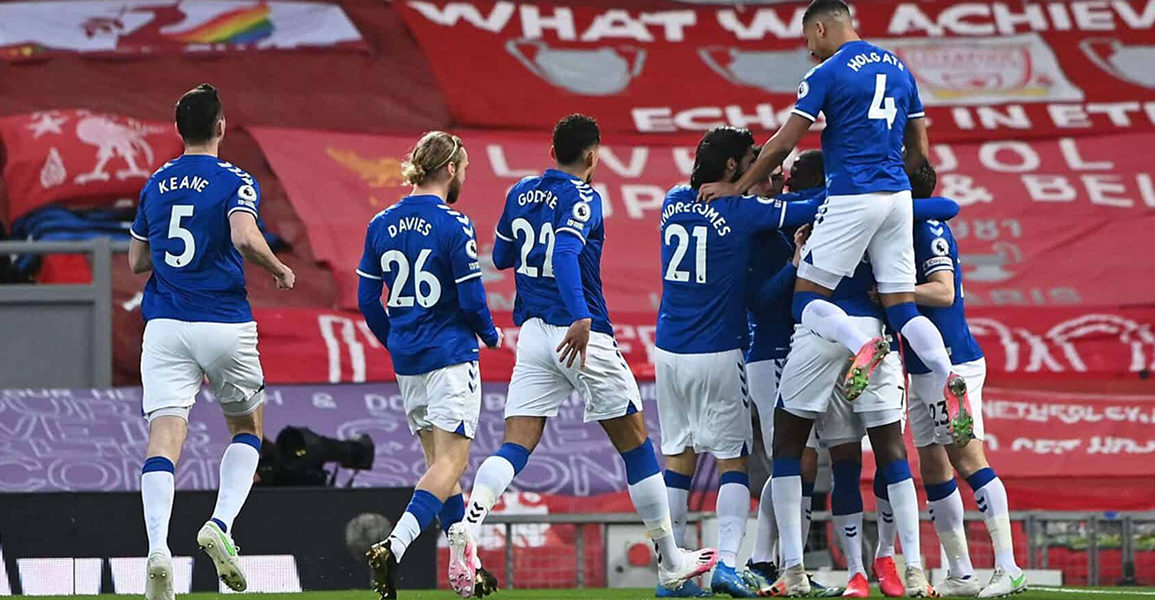 What a month February 2021 was… Everton played six games, three resulted in victories, one was drawn and two were lost. However, this only relates cold hard facts – a more appropriate way to summarise February would be to unashamedly borrow the title of a book by Jim Keoghan as we had Highs, Lows and a euphoric occurrence that we’ll rename the Bakayoko.

The month began on a high as our beloved Blues crossed the Pennines to the wastelands of West Yorkshire and the far too often unhappy hunting ground of Elland Road. With sections of the media continuing to laud Leeds as the ‘entertainers’, Everton chose to take on the handle of winners as an early strike from Gylfi Sigurdsson getting on the end of a superb cross from Lucas Digne was supplemented by Dominic Calvert-Lewin doubling the lead just before the break. As we know from untold previous occasions, Everton don’t always make it easy and when Leeds pulled a goal back early in the second half, it became a tad nervy before the win and three points were secured.

Old Trafford and high-flying Manchester United were next up and this time, Everton chose to put us through a bit of a wringer as the home side were allowed far too much respect and time to waltz into a two-nil half time lead on goals from Cavani and a sublime finish from the snide Fernandes. The break though worked to the Blues advantage as they roared back into contention with Abdoulaye Doucoure charging forward to score after De Gea failed to hold a cross from DCL and moments later, the Frenchman found James Rodriguez and the net bulged again. You’d have been forgiven for expecting Everton to take full control but oh no, Robin Olsen was unfortunate to slip trying to get to a McTominay header and United led again. In days of old, this would have been terminal but, it merely served to spur the Blues on for a grandstand finish, and after Richarlison put a shot wide of the target, a late, late free kick saw Michael Keane flick on the cross and Dominic Calvert-Lewin escaped his markers to neatly tuck the ball past De Gea for a well-deserved point.

The FA Cup pitched Everton up against Jose Mourinho and his Tottenham, and the visitors raced out of the traps quickly to open the scoring in what was to become a footballing equivalent of the Gunfight at the OK Corral. Sanchez with a third minute header set the stall out for Spurs to dominate the opening 25 minutes before Everton finally seemed to think ‘sod this’ and set about them. Dominic Calvert-Lewin took a ball from Sigurdsson to volley home his 50th goal for the Blues and hardly had the absentee crowd regained their living room seats, than Richarlison took a flicked-on header from DCL to fire a daisy-cutter past Lloris for the 2-1 lead. DCL then lured Hojbjerg into an ill-judged challenge in the area and Gylfi Sigurdsson coolly netted the resulting spot kick. Three-one, job done? Don’t be daft as in the time remaining after those hectic seven minutes, Spurs worked a nice move for Lamela to reduce the arrears in added-on time. Everton lost DCL to injury early in the second half and Spurs brought on Harry Kane, and duly tied things up as Sanchez netted his second of the game. Not to be upstaged, Richarlison bagged his second of the game and put the Blues back in front as he took a sweet pass from Sigurdsson to crash a shot past Lloris. The FA Cup is a special incentive and Spurs wouldn’t lie down and came back yet again when Son crossed to the back post and Kane stooped to tie the game up and send it into extra time. The helter-skelter nature of the game inevitably led to a drop in pace while both sides still strained forward and it was another superb pass from the ice-cool Icelander Sigurdsson that picked out our diminutive Brazilian substitute Bernard and in similar fashion to that of his countryman, he buried the winner past Lloris from a tight angle.

Three games played had produced two wins, including progression in the Cup, and a draw and three highs… sadly, it was now time for the lows.

Fulham arrived at Goodison with only two league wins to their credit all season, and with Everton having the offest of off days, the Cottagers recorded their first ever top flight victory at the Old Lady. We have to give Scott Parker and his players a lot of credit as they came with a definite gameplan and executed it to perfection with loanee Josh Maja bagging a brace on his first start for the London outfit but Everton, quite frankly, stunk the gaff out on the day and the less said the better.

Premier League leaders Manchester City came for their re-arranged Covid delayed game and they proved too much for Everton to handle. Certainly the effort from the Blues was much improved from that on display in the Fulham game and after Foden had put the visitors ahead with a deflected shot, Everton showed spirit in drawing level as a cross from Coleman found Digne and his first time effort came back off the far post to hit Richarlison neatly on his thigh and the score was level again. Into the second half and City moved up a gear and just after the hour mark, Mahrez bent a quality shot beyond the reach of Jordan Pickford and in off the far post. And with just over ten minutes to play, the visitors cemented the points as Mahrez found Jesus and he laid the ball neatly into the path of Silva who took it on before scoring with a shot that JP will probably think he could have done better with.

So two lows following the three highs… where was the Bakayoko coming from ?

No better occasion than a Derby, the short walk across Stanley Park to our former ground and the aim of laying to rest the ignominy of being winless there in over twenty years. Too many sections of the RS-leaning media hyped the game up as it being the revenge day for the injury van Dijk incurred at Goodison. Everton under the experienced tutelage of Carlo Ancelotti weren’t interested in or prepared to enter into any such discussions, the RS and the media could witter all they wanted too, Carlo was more interested in getting back to winning ways. And so it transpired as a sublime first touch and instantaneous pass from James Rodriguez put Richarlison in behind the statuesque Kabak and the chicken-dancing ensued as he slotted the opening goal inside three minutes. Try as they might and they did enjoy lots of possession, the RS couldn’t break a resolute Everton defence down and even the dying swan acts of Salah and Mane went unheeded as the Blues stood firm. And the piece de resistance came as Tom Davies collected a clearing header from Michael Keane to look up and spot Richarlison in space on the right flank. Tom found him and he was away with Dominic Calvert-Lewin in hot pursuit on his inside to take the pass and fire a first time shot that Alisson parried. DCL went for the loose ball and was brought down by an errant lifted leg from Alexander-Arnold and the referee had no hesitation signalling PENALTY. VAR reared its ugly head trying to overturn the decision but, the referee was adamant and it was down to Gylfi Sigurdsson to seal the points with a low shot perfectly placed into the bottom corner. Job done and demons exorcised – the long wait was over and the Blue half of Merseyside and Blues everywhere celebrated – we’d had the Highs and the Lows, this was our latter day Bakayoko.

Back down on terra firma after a few days, we looked at the statistics and noted that eighteen players enjoyed game time in February with eight players appearing in all six games however with Carlo rotating his now thinner squad, only Ben Godfrey played every minute of all six outings.

To the individual Man of the Match vote winners and we began a record month of voting numbers with Ben Godfrey winning by a massive margin for the 2-1 win at Leeds. Tom Davies topped the poll for the 3-3 draw at Old Trafford and took his fine form into the FA Cup tie with Tottenham to win his second successive MotM poll with an even bigger share of the voting. The poor display against Fulham saw Tom win his third MotM on the bounce and for the first time ever, we had a tie in the vote for the MotM against Manchester City – Abdoulaye Doucoure and Tom Davies inseparable in a two-horse race. The win across Stanley Park saw another record set as the MotM vote for the 2-0 win over the RS saw the largest number of votes we’ve recorded for a single game since we began the polls and the winner for an impeccable performance at the heart of the defence was Michael Keane.

Having dispensed with the ubiquitous plug for GOT, the forum and polls, let’s get to the golden envelope business and on with the top three vote recipients and the PotM result, and in time honoured fashion, here’s the result in ascending order of the votes cast… with a very clear and deserved winner.

In third place and maintaining his place in the top three for a second month…Michael Keane.

Continuing his excellent form forward for yet another month, including being in our first ever tied vote, second place goes to… Abdoulaye Doucoure.

And that leaves on the back of three clear wins and a tied vote, our runaway vote winner with just under 28% of a record vote for the month, the congratulations go to the GOT Player of the Month for February… Tom Davies.