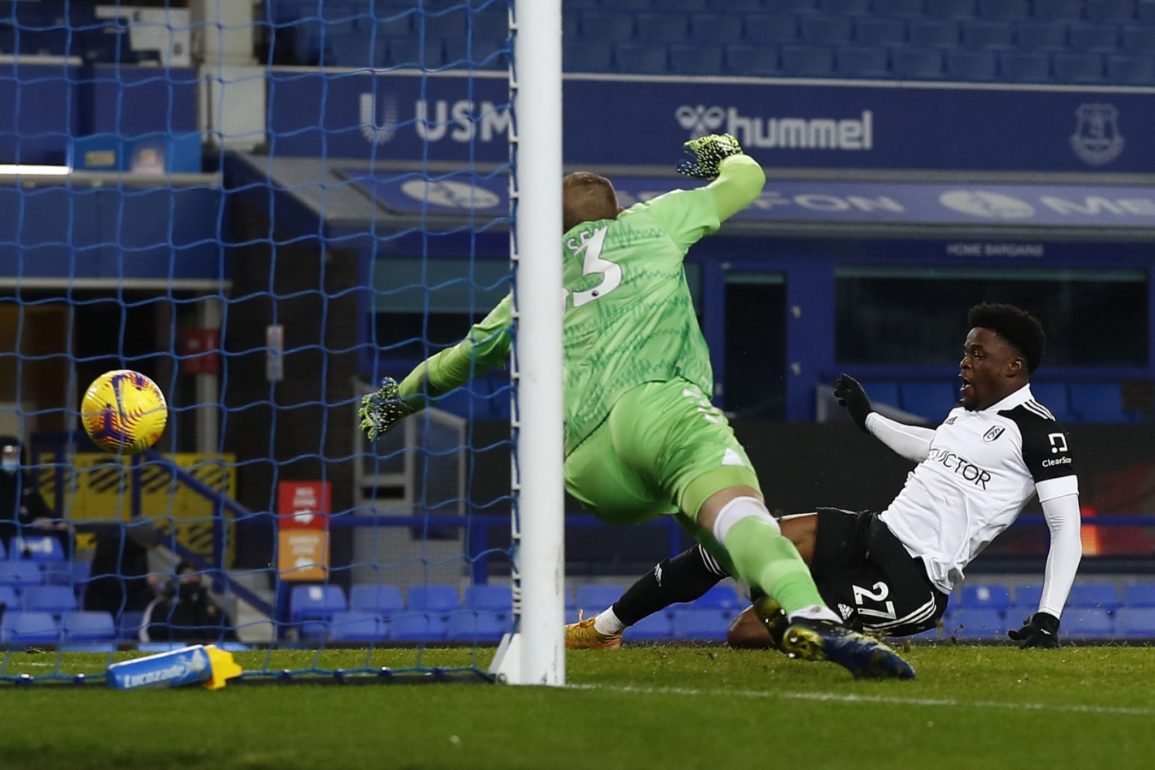 A night to forget as Fulham stroll to victory.

Josh Maja made a dream full debut for Fulham as they belied their position in the Premier League table and strolled to a first ever league victory at Goodison Park as Everton, quite frankly, stunk the place out.

No sooner had the dust settled on the FA Cup tie with Tottenham than fellow Londoners Fulham pitched up at the Grand Old Lady. In eight games against clubs from the capital so far this season, Everton have won seven and lost just one, and with the Blues knocking on the door of the top four and Fulham languishing in the bottom three, the odds were clearly stacked against them.

In the aftermath of the two hour, nine-goal thriller on Wednesday, Everton had concerns over leading scorer Dominic Calvert-Lewin and speaking to the media on Friday, manager Carlo Ancelotti confirmed many Blues worst fears when he said, “Against Spurs, he only had the feeling that something wasn’t good so he stopped. He only has a little problem. He can play on Wednesday.” The Don expanded further on team selection matters for Fulham adding, “Both [Calvert-Lewin and Pickford] will not be available for the game on Sunday. We are looking for the next game on Wednesday where we think both of them will be available. We have back Andre Gomes, James, Josh King, and in the next week we think Allan will be back so the squad is ready for the next games. James is fine, he trained yesterday and today and is available for the game on Sunday. No problem.”

Ancelotti though, for all the euphoria following the progress in the FA Cup, remained focussed on improving the home form in the Premier League as he commented, “The last league game we played at home was a defeat, a surprise, we don’t want surprises against Fulham, while knowing it is a difficult game for a lot of reasons. We are not far from the first four places and our target is to stay there. Fulham, in my opinion, are playing really good football – with courage and intensity.

Asked about the helter-skelter nature of the fixture scheduling he noted, “We have enough time to recover properly but we have to pay attention in this kind of game. I was really pleased with the effort and spirit against Tottenham. The spirit of Seamus Coleman who came on in a position he is not used to playing. They are all good signs but we have to put that game away because we have another to focus on.”

Fulham arrived at Goodison winless in their last twelve outings and with only two all season, the gap between them and Newcastle, one place above is a huge ten points.

The Cottagers though under Scott Parker have shown that they can cause other teams problems and a fair case in point was the game at Craven Cottage when Everton won by the odd goal in five but, were made to work hard for it especially in the second half. In their last game against West Ham, Fulham forged 20 attempts on target albeit without scoring in a nil-nil draw.

Parker is well aware of his sides lack of goals and asked what he’s doing to address this he noted, “I think there’s elements of psychological, and there’s elements of technical. The psychological element is you often find strikers are under the most pressure. And you often find that strikers or forward players are the ones who have real dips in form because there’s that psychological element. For me, in my position, I need to keep a real level on it, and to be able to do that, I often find that you have to have some real basics to fall back on.”

Clearly a thinking manager, he expanded adding, “When you’re going through a little bit of a hard time in front of goal, you need some real core fundamental basics to fall back on. But to be able to do that, you need to strip it all back and get back to basics, and hold your game on some real core fundamentals. Me sitting here trying to help the players, I need to weigh up both [psychological and technical factors] really. We’re creating chances, now we need to work out where we can actually convert them.”

In terms of his squad, Parker advised that both Tom Cairney and Terence Kongolo were unavailable to face Everton and that seemed to suggest that striker Josh Maja, on loan from Bordeaux, would likely lead the line. Parker ended the conjecture naming his starting eleven: Areola, Tete, Andersen (c), Tosin, Aina, Reed, Lemina, DeCordova-Reid, Loftus-Cheek, Lookman and Maja.

On another very cool and breezy evening, our referee was Andy Madley.

Lemina with an early free kick for Fulham could only find the head of Ben Godfrey, the opening exchanges seeing the visitors closing Everton down quickly, the Blues reacting in similar fashion before a long ball found Loftus-Cheek, Olsen making the save as the offside flag was raised. Olsen didn’t get the best of punches to a free kick and Maja couldn’t control the ball, putting it over the bar – an early warning for the Blues.

Coleman conceded the games first corner, and it was flicked on by Decordova-Reid to come back off the back post, Doucoure blocking a shot from Aina and the ball deflected over for a second corner that was defended much better. Fulham had started much the better, Everton maybe taking their opponents too casually? Decordova-Reid found Loftus-Cheek in the Everton area, his cross deflected clear off the heel of Holgate but, another iffy moment for the Blues in a disappointing opening quarter hour.

A rash challenge from Tete left Lucas Digne in pain as Everton tried to get forward. However it was Fulham passing the ball around seemingly with more confidence looking for an opening. And it very nearly came and Doucoure lost possession and the ball was laid back by Maja into the path of Reed who blazed across the face of goal.

A Fulham raid started from a poor ball from Holgate and he redeemed his error with a clearing header from a Lookman cross. Tete with another silly challenge on Digne conceded a free kick that finally saw a ball into the Fulham area but disappointingly, as Godfrey was unable to reach the cross from Digne, it sailed out for a goal kick.

Fulham spurned another chance to open the scoring, Decordova-Reid finding Lookman who hooked his shot from inside the area wide of the near post – WAKE UP Everton!! Half an hour gone and this was not good watching for Evertonians, the side failing to make any impression on Fulham – Richarlison, Rodriguez and Sigurdsson not featuring at all – and it needed Godfrey to clear a cross from Loftus-Cheek to safety.

Everton finally came to life, the first chance Rodriguez had to influence proceedings saw him ride a tackle in midfield to thread a ball into the path of Gomes who fired a shot well wide of the target, and the next raid seeing Coleman get forward to shoot and beat Areola only to see the ball hit the post. Fulham cleared a Rodriguez free kick and went back to their neat, calm passing play having much the better of the possession.

Into the final five minutes of the half and this Jekyll and Hyde performance from Everton compared to recent games continued before a long ball from Gomes saw Digne win a corner off Tete. Played short, the ball came to Gomes for a cross that Reed cleared with an overhead kick. Godfrey at the other end headed another Lookman cross clear and one added minute was signalled. Any schoolteachers watching would definitely have written a half time report on Everton saying, “Must do better!”

Somewhat surprising many supporters, Carlo Ancelotti resisted the temptation to make any immediate changes for the second half, and neither did Scott Parker who was surely more pleased with his sides opening 45 minutes.

Fulham back at it straight way winning a corner off Godfrey, Davies completing the clearance before being fouled by Reed. All the warning signs offered by Fulham were not heeded as three minutes in, they took a thoroughly deserved, Aina and Lookman playing a one-two with the cross into the six-yard area easily and confidently finished by Maja.

Lookman was clearly enjoying his return to Goodison, constantly causing problems and in so doing, preventing Coleman from getting forward and playing in Reed for another cross that flashed across the Everton area before being hooked clear. Fulham, quite frankly, were embarrassing Everton and really should have doubled their lead when Aina again crossed for Maja, Holgate clearing.

A double change came on 56 minutes, Josh King and Michael Keane replacing Tom Davies and Seamus Coleman respectively to bolster the defence and provide a focal point up front – hopefully.

Fulham were looking very comfortable and Lookman, fed by Loftus-Cheek, fired high and wide while at the back, their defence was coping ridiculously easily with what little forward ball Everton were having as we passed the hour mark without a shot on target having been made by the Blues.

Lookman getting away from Holgate forced Godfrey into conceding another corner, Everton clearing and launching a quick break as Richarlison released King, Tete showing his pace to nullify the threat. Fulham deservedly doubled their lead in the 65th minute, Lookman again the architect laying the ball back for Reed to shoot, the shot beating Olsen to come back off the post for Maja to tap home his second of the game.

Rodriguez went down after a tackle by Reed and Aina, and was replaced by Bernard in the 68th minute.

Gomes and Digne worked the ball forward to win a corner, Areola with a long punch easily dealt with the Sigurdsson set piece. Fulham made their first change on 71 minutes, goalscorer Josh Maja replaced by Cavaleiro.

Andersen headed a Digne corner clear only as far as Sigurdsson but his shot, the first on target for Everton, was easily saved by Areola, and we entered the final quarter hour with the kind of history we don’t want very much in the making. Josh King got on the end of a cross from Andre Gomes to beat Areola and find the net only to be flagged offside. Fulham conceded a corner through Aina and after dealing it, replaced Ademola Lookman with Anguissa.

Fulham were dealing with the deplorable efforts from Everton with consummate ease, a late free kick from Sigurdsson epitomising the woeful showing. Michael Keane with a header from a Holgate cross saw it fly straight into the waiting arms of Areola.

Four added-on minutes saw Richarlison win a corner that Fulham easily cleared, Digurdsson stoop to head wide while appealing for a penalty for a high boot before referee Madley mercifully brought proceedings to an end after Areola held a Digne free kick and handbags ensued as Keane appeared to lift his trailing leg into the goalie, and both Keane and substitute Onaham were booked.

I’m sorry to end this match report by saying this was the worst I’ve seen an Everton side play since the days of Walter Smith, how many times do we fail to turn up for games we simply need to win. But, and it’s a huge but, well done Scott Parker and Fulham, you thoroughly deserved the win.