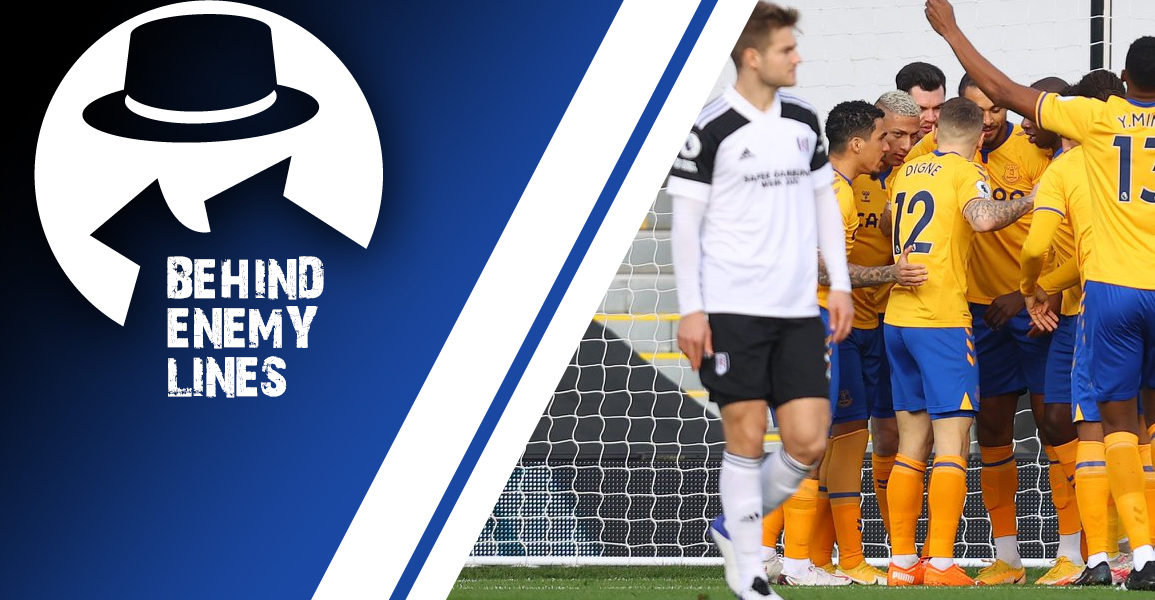 Four days off the back of, dare I say, the game of the season thus far, Everton host another white-kitted London club, this time in the form of relegation favourites Fulham.

In their previous meeting, Carlo Ancelotti’s men escaped with a 3-2 win on the banks of the Thames thanks to a Dominic Calvert-Lewin brace and Abdoulaye Doucoure’s first Everton goal, which would turn out to be the winner.

Fulham have not won a single league match since upsetting Leicester City in the match directly following their defeat at the hands of the Toffees, which makes it no victories in 12 games for Scott Parker’s side, which is simply not good enough to drag themselves out of the hole they find themselves deeply entrenched in at the bottom of the table.

On the other hand, Everton have responded well to their shock defeat at Goodison Park against Newcastle, winning a hard-fought game at Elland Road 2-1 and somehow managing a dramatic 3-3 draw at Old Trafford the weekend after. They also, of course, knocked Tottenham Hotspur out of the FA Cup in a dramatic tie that took 120 minutes of wide-open football to decide.

Now, it is an absolute must-win fixture for the European hopefuls, who simply can’t afford to slip up again at home against a side they should be comfortably beating. That being said, Fulham have pulled off a few unlikely draws this year, forcing both the aforementioned Spurs and Liverpool into 1-1 stalemates. Will they be able to pull it off again on Sunday, or will Everton get the win they certainly need in order to keep up in the race for the Top 6?

This week on Behind Enemy Lines, I spoke to my friend Henry Hill, who is a producer for Football Daily and is a regular on the quiz show “The Football Pyramid”, a personal favourite of mine. He is, of course, a massive Fulham fan, and so here is how our conversation went:

Q: Fulham currently sit in 18th place with 15 points from 22 games, which leaves them 8 points from safety. What are your thoughts on the Cottager’s survival fight thus far?

A: My biggest worry about Fulham is that we will get relegated and everyone will tell me “at least you played nice football”…! While this is true to some extent, despite all our eye-catching work it’s been painful to witness the lack of conviction in the final third. Too many draws and dropped points, while the likes of Burnley and Newcastle are playing dull but pragmatic football and picking up wins.. disgusting!

Q: It’s no secret that Fulham have struggled to turn draws into wins, as they have produced 9 stalemates already this season. What must the Whites do better during the back half of the season to secure enough points for survival, and how hopeful are you that they can climb that mountain?

A: I sincerely hope Josh Maja has some magic in his boots but I’m just not sure. It’s clear to see we need a goalscorer, as Mitrovic has been missing this season. Against West Brom, however, he showed how useful his link-up play can be, so hopefully, he forms a quick bond with Maja. Honestly, Fulham just need to take a chance and be more incisive in front of goal, as teams have quickly figured out if they can get bodies behind the ball Fulham don’t quite have the creativity to crack that nut!

Q: Scott Parker’s side certainly gave Carlo Ancelotti’s Everton a run for their money in a game that ended 3-2 at Craven Cottage earlier this season. What were your thoughts on that game and how do you think this one will be similar or different?

A: That game pretty much summed up our entire season didn’t it? Horrendous first half where we looked pathetic, then a spirited effort in the second which proved too little too late. DCL was bang in form then and we let him score twice, and that Cavaleiro missed pen was the stuff of nightmares. I certainly don’t expect us to be 3-1 down at HT as our defence is much improved, but can’t get the dreaded thought of another draw out of my head.

Q: Everton find themselves just 3 points off the Top 4 with 2 games in hand. What are your thoughts on Everton’s season so far and how high do you think the Toffees will finish?

A: I think Everton have been fantastic so far. It’s hard not to love Carlo, the James signing, and the rise of DCL, but I do admire the defensive reassurance they have finally got after some questionable CBs over the years. Keane and Mina are quietly emerging as one of the most reliable pairings in the EPL, which is great to see. I also have a soft spot for Gylfi Sigurdsson, so very happy he has recovered after a shoddy last season. It’s super competitive at the top, and I think Tuchel’s arrival may give Chelsea an edge, so a Europa League finish would be an excellent result. But stranger things have happened than the Toffees finishing top 4!

I will say that this month marks 5 years of Moshiri ownership, I believe, and this is your most balanced squad in that time.

Q: Who will win the game at Goodison Park on Sunday and why?

A: Everton have recovered really well since that silly defeat to Newcastle United so I’d be a fool not to back them. HOWEVER, they haven’t blown many teams away this season, and don’t take a ton of shots, so I think this will be a lot more cagey than the Craven Cottage meet. I’ll give it 1-0 to Everton, but don’t be surprised if Fulham stay in tune and emerge with ANOTHER DRAW!

So there we have it! I’m going to go for a 3-1 win to the Toffees, as I think that despite the absence of Dominic Calvert-Lewin, the uptick in form of Richarlison combined with the qualities of James Rodriguez will prove too much for the Cottagers. My thanks to Henry for joining us; you can find him on Twitter @henry_hill94! I would love to hear your feedback about this or my other articles, so please reach out to me on Twitter @ParrettGost. Thank you all for reading, and as always, Up the Toffees!