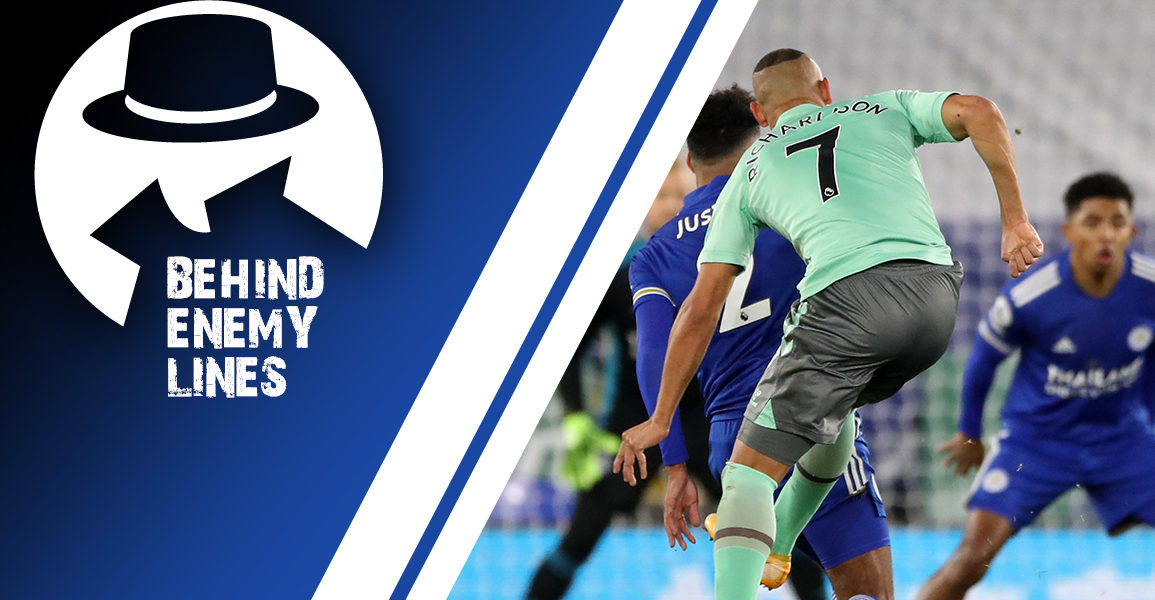 It will be one of the most important games in the seasons of both Everton and Leicester City when the two Champions League hopefuls square off on Wednesday night at Goodison Park. Both teams come into the game in impeccable form, with Leicester recently conquering both Southampton and Chelsea by 2-0 scorelines, while Everton’s most recent game was an all-important 2-1 win at Molineux. The Toffees have won 5 out of their last 6 league games and will hope to leapfrog both Liverpool and Tottenham by beating the Foxes in what is one of their two games in hand. It should be quite the bout between two high-fliers full of confidence with lofty ambitions, and you get the feeling that a moment of real quality might end up being what separates the sides come full-time.

This week on Behind Enemy Lines, I spoke to James Sharpe, a Sports Reporter for the Mail and a former LCFC Correspondent for the Leicester Mercury. My thanks to him for taking the time to talk to me! Here is how our conversation went:

Q. A big story from the 2019/20 campaign was the collapse of Leicester City during the second half of the season, which saw them lose what seemed to be a sure Champions League spot and instead slip down into the Europa League places. What caused that dramatic late-season slip and how can Brendan Rodgers ensure it doesn’t happen again this season?

A: Thanks for reminding me about that! It was a combination of things. Two humbling defeats to Liverpool and Man City over Christmas put talk of title challenges in harsh perspective and prompted a slump in confidence that they struggled to recover from. The enforced break didn’t help either.

But this was compounded mostly by injuries to big key players during the run-in. James Maddison, Ben Chilwell, and Ricardo Pereira all missed the end of the season, arguably Rodgers’ most creative outlets. Rodgers gets his width from his full-backs pushing on and without his first-choice options, they struggled.

This season, it’s the other way around. They have recruited brilliantly so even without Pereira and Chilwell, who left for Chelsea, they had brought in Timothy Castagne while James Justin had improved from his first season.

And key players are returning from injury, not being ruled out. Pereira and Caglar Soyuncu are back and Maddison is fully fit and purring again. The loss of Jamie Vardy is a blow but they knew this was coming, he’s been needing a hernia operation for a while, and Leicester have planned it for now so he can be back for as much of the run-in as possible.

Q. Leicester City will be without the reigning Golden Boot winner Jamie Vardy on Wednesday, who recently underwent surgery. How will his absence change Rodgers’ tactics on Wednesday and subsequently, how will the story of the game be altered by this?

A: Not as much as it would have done in previous seasons. Vardy’s role has changed slightly, he’s dropping deeper than before, and not just relying on runs off the shoulder of the last defender. Now, his role is also to bring the likes of Harvey Barnes into play. Rodgers has other players who can do that part of the game, Ayoze Perez for example.

They won’t be as ruthless in front of goal without Vardy, few are as clinical as him, but he hadn’t scored in his last five anyway with Leicester still churning out results with others on the scoresheet. It shows they aren’t *quite* as reliant on him for goals as they have been.

Q. What are your thoughts on the job Carlo Ancelotti has done at Everton and the Toffees’ season as a whole? What do you think the squad still lacks to compete for a Champions League berth?

A: I’ve been really impressed. The work he has done with Calvert-Lewin has been phenomenal. He’s now a top-tier striker. The style of play is good too. Everton are fun to watch.

From what I’ve seen of Everton, and admittedly it won’t have been as much as your readers, I’m not sure they lack too much for a shot at the Champions League.  Five wins in their last six have put them right in the mix again.

Quality in depth is perhaps the thing. James Rodriguez looked on a different planet at the start of the season but when his injury problems started, there didn’t seem to be much when he wasn’t there.

I imagine the same would apply to Calvert-Lewin, though I always got frustrated when people made the same pompous analysis about Vardy five years ago. He never got injured so it was fine!

The injury to Allan and Doucoure’s suspension are a blow, I think they’ve been superb this season.

If Ancelotti can have his key players fit, and you can keep up the consistency, no reason at all why you can’t get there.

Q. One of Everton’s signature wins of the season so far came at the King Power, where they put a toothless Leicester side to the sword by a scoreline of 2-0. What must Leicester improve upon from that performance in order to put out a better display this time around?

A: Everything. They were atrocious. Then, somehow, produced an immense display to beat Tottenham days later. That was, I have to say, a very Leicester thing to do.

What they have to do is defend set-pieces better. It’s been the weakest part of Leicester’s game for so long and Rodgers is yet to find a way to fix it. It was from a set-piece that they conceded against Brentford in the FA Cup.

With someone as prolific in the air as Calvert-Lewin, Leicester just cannot afford to give away stupid free-kicks and corners.

Q. Who will win the game at Goodison Park on Wednesday and why?

A: A tough one to call, this. Everton can really exploit Leicester at set-pieces but I fancy Maddison and Tielemans to take advantage of Everton’s injury-hit midfield.

So there we have it! I myself will go for an entertaining 2-2 draw. My thanks again to James, who you can find on Twitter @TheSharpeEnd, and you can find me @ParrettGost. Hopefully, we’ll have an enormously important victory to discuss in my player ratings article after the match. I’ll see you all then. Thanks again for reading, and as always, Up the Toffees!