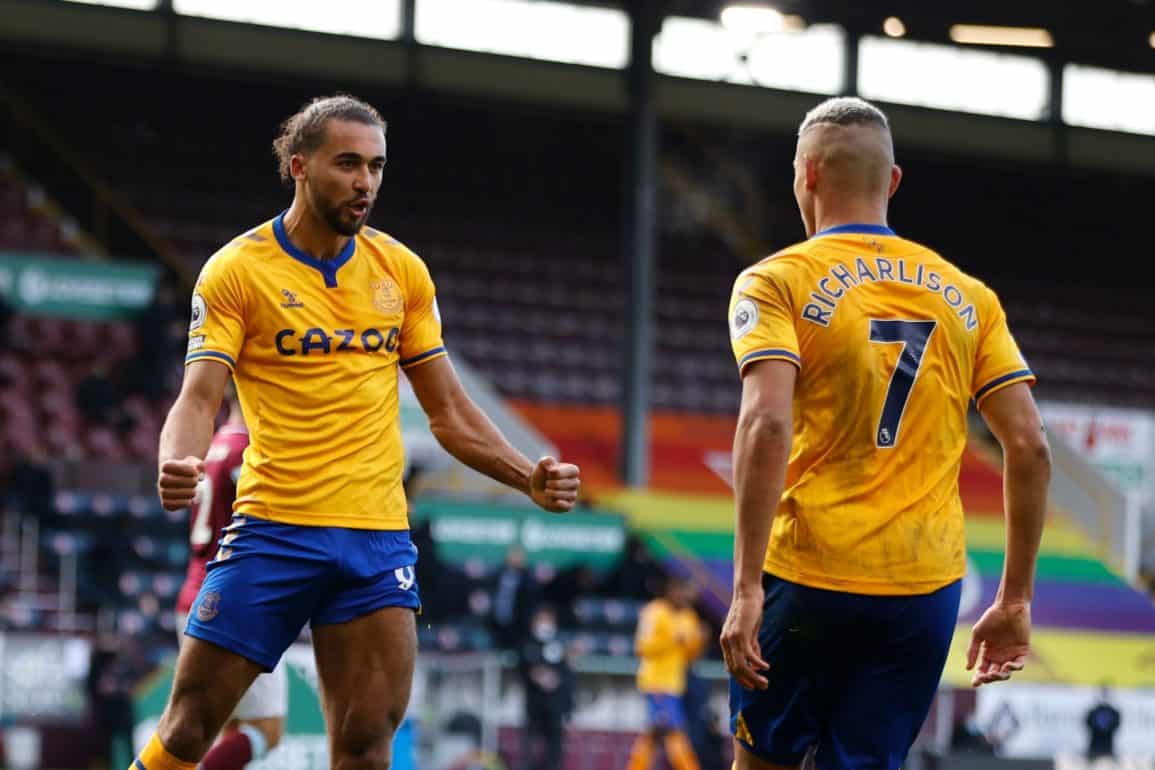 It was yet another disappointing day for Everton, who despite dominating possession and creating the majority of the game’s clear chances, failed to win at Turf Moor for the second year running. It was a nightmare start for the Toffees, who immediately fell down 1-0 due to Robby Brady’s resounding finish in the 2nd minute. An injury to Fabian Delph, however, turned out to be the spark Everton needed to get back in the game, as it forced Ancelotti to change back to a 4-3-3. Doucoure and Allan were quite frankly terrible as the two in midfield, and so having Gomes as a third number in the center of midfield turned out to be very beneficial. Everton got back into the game with a moment of quality when Richarlison gathered Allan’s pass and delivered an inch-perfect ball with his left foot for DCL to routinely poke home from 6 yards. It seemed at that point that Everton had a very good chance to go on and win the game, and there were certainly opportunities to do just that in the second half, but Nick Pope made a few big saves, and ultimately the golden chance for the winner was thrown away by a certain Icelandic waste of space. It ended 1-1 between Dyche’s and Carlo’s men, which is a disappointing result for the Toffees considering the simply grueling stretch of matches upcoming during December’s congested fixture list. This was a must-win game for Everton, but failing to do so meant it’s now only one victory in the last seven for the Merseysiders; a record simply not good enough if European football is the goal for this season. Here are my player ratings for Burnley 1-1 Everton.

Despite failing to keep a clean sheet again, Jordan Pickford has now had consecutive solid performances for the first time seemingly in years. Although he conceded just minutes into the game, Pickford deserves a lot of credit for helping Everton back into the game, as his foot save to deny Chris Wood Burnley’s second in the 41st minute, keeping Everton in the game. He also made a solid reaction save on Wood’s headed attempt in the 83rd minute. Perhaps playing in front of Gareth Southgate against his main rival for the England #1 shirt gave Jordan some extra motivation.

I thought Ben Godfrey did a really admirable job filling in at left-back, a position he is not familiar with at all. He made some crucial defensive actions and was composed on the ball. As much as I want to see Niels Nkounkou playing at LB, Godfrey did really well to adjust on the fly. I found myself saying “Well done, Ben” quite a few times after the formation change. I guess it’s good to know that he is another option at LB with our ever-increasing injury crisis in the full-back position.

Initially, I thought bringing Yerry Mina back into the side for this game was a smart move considering the opposition. Michael Keane outshone him in the air, however. It was a relatively anonymous performance from the big Colombian. And other than conceding a few corners on tackles, I can’t remember much about his game.

I thought Michael Keane was colossal in the box today. He won countless important headers that could have easily become Burnley goals, as Jordan Pickford was continually crowded out and it was up to Big Mick Kegger to get the ball away and get the ball away he did. At the moment, Keane is certainly Everton’s top center-half as Holgate and Mina struggle to find any consistent form.

Based on the first half, I would have put Iwobi much higher than this. He somehow became more influential after the switch to 4-3-3 midway through the first half and was very involved in almost all Everton build up. He was relatively assured in the tackle for a let-winger playing right-back. However, I have to dock him purely for his poor delivery in the second half. He had countless crossing opportunities but largely failed to create a real chance from any of them. I still think he’s doing a good job in this new position, but had his end product been better, Everton could have easily been walking out of Turf Moor with all 3 points.

I don’t have much to say about Fabian Delph other than I hope he recovers quickly. Losing yet another player who can play left-back is a compounding blow for Everton, and Niels Nkounkou is now the only legitimate left-back in the entire squad. Let’s hope Delph’s hamstring injury isn’t as bad as it initially appears.

I thought Allan was poor today, especially during the first thirty minutes when he and Doucoure were playing as a midfield two. Burnley’s goal was almost entirely Allan’s fault, as he terribly misplaced a 5-yard pass to Doucoure who was right in front of him, which was collected by Ashley Westwood and dished off to Robby Bradie to smash home from the top of the box. I was very disappointed with Allan’s play on the ball today, and I think it’s safe to say that he is best in a midfield three.

The same goes for Abdoulay Doucoure, who looked awful in the first half-hour. He is simply not good enough on the ball to be effective in a midfield two. He also had a few poorly placed passes but was lucky that none of them led to goals. His legs are certainly useful, however, as he had 8 recoveries in the first half alone. If today’s game didn’t convince Carlo Ancelotti that a 3 man midfield is necessary for Allan and Doucoure to thrive, then I don’t know what will.

For the first time in an Everton shirt, James was quite predictable today. Burnley were not fooled by his curled long balls to the left-wing and picked them off alarmingly often. He, like seemingly everyone else, was a bit sloppy on the ball today, and I remember him hooking a 5-yard pass to Godfrey straight out for a throw. On the positive side, his shot in the second-half was certainly curling in if not for a good save by Pope, and James created what should have been the winning goal except for the fact that it was Gylfi Sigurdsson on the end of it, which meant it had less of a chance of going in than if Carlo Ancelotti himself had run on the pitch to finish it. The Colombian is still class though, isn’t he?

Richy didn’t quite seem himself today, but he did really well on the assist for DCL’s goal. Apart from that one kick of the ball, however, he was quite wasteful in the final third and lacked a cutting edge for the umpteenth time this season. His lone Premier League goal was from the penalty spot at Selhurst Park and he has spurned quite a few chances since. I really expect him to do better with his finishing as we enter this tough run of fixtures. If we want to exit December with a decent amount of points, we need to be more ruthless in front of goal, and Richarlison is really the main culprit of wastefulness at the moment.

DCL simply cannot stop scoring. That’s now a league-leading 11 Premier League goals for the English International, who is really the only consistent performer in the Everton squad. His form is simply ridiculous, and you back him to score in every game that he plays. Today’s goal was yet again a first time finish in the box, DCL’s new trademark. Other than the fact that his goal scoring has been carrying this Everton team all season, he didn’t do too much today and was a bit isolated up front, as usual. Still, he seems to come up with the answer for Everton time after time and he did that yet again today with his stoppage-time strike just before the intermission.

I actually thought Andre Gomes played pretty well today. Other than one poor passing decision on a counter, I thought Andre played well as the third midfielder after coming on after a half-hour. He kept possession well and was mainly effective with his passing. That one run of play where he sprayed a beautiful ball out to Richarlison and then just a few seconds later showed some brilliant body and ball control when he fell over but managed to keep the ball and use some coordinated footwork to breeze past his man. He also had one exceptional through ball for Iwobi, but the crossing opportunity was wasted by the Nigerian. I think it was an encouraging performance overall from Gomes, who still looks to really get back to 100% fitness. I hope we will see him playing in a midfield three again next week.

I am not exaggerating when I say that I never want to see Gylfi Sigurdsson in an Everton shirt ever again. He is simply an atrocious footballer. His decline has been truly remarkable, as he went from one of the most lethal attacking midfielders in the league to the most useless excuse for a footballer I’ve seen. James made an unbelievable nutmeg pass to send him through and all he could muster from 13 yards with the entire goal at his mercy was a pass on the floor right at Nick Pope’s right foot. Utterly embarrassing. I’d have rather any other player on the entire pitch be on the end of that, and then it would have been a huge victory for Everton. When will Carlo learn his lesson? Send this man to the U-23s.

Did Cenk Tosun touch the ball? He got kicked in the face and somehow didn’t draw a foul, but I genuinely don’t think he touched the ball. Whatever.