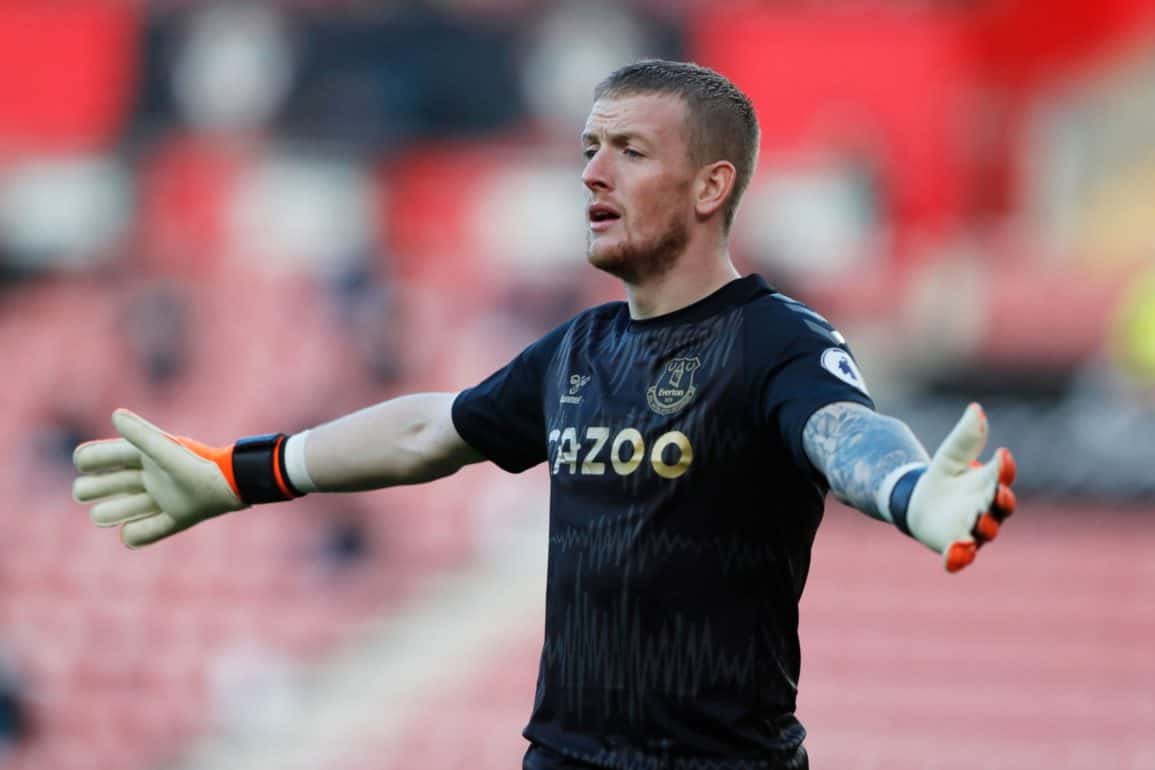 A poor showing all round from Everton at St.Marys was topped off by a straight red card for Lucas Digne as the unbeaten record went with the first loss of the season.

While one half of Merseyside and most of the national sports media, press and pundits continued to wage war on Jordan Pickford, Richarlison and Everton in general over the injury to [Poor language removed] van Dijk in last weekends ‘derby’, the Blues maintained a dignified silence in order to concentrate their attention and energies on preparing for the visit to St.Marys’ to take on Southampton.

After a two loss, two win opening to their season, the Saints drew at Chelsea last time out with a highly creditable fightback against the London side to see them sitting 12th in the Premier League table going into the weekend fixtures. Loanee Theo Walcott wasn’t eligible to face the Blues so Saints boss Ralph Hasenhuettl was forced into at least one chance from the side that drew at Chelsea, and another question was whether he would give a home debut to recent signing, 21-year old French midfielder Ibrahima Diallo.

With striker Danny Ings reported to be close to extending his current contract with the Saints, the club were hoping to get it finalised ahead of the clash with the Blues, and Ings who has a decent record against Everton was no doubt looking forward to the game. And with him and Dominic Calvert-Lewin both having notched their first goals for England in the recent international break, comparisons between the two in-form forwards were bound to be made.

Speaking ahead of the game, the Saints German boss noted, ”Armstrong is back in training and has had a good session with us so we will take a look at how he is for the weekend. He’s good (after self-isolation), he’s back and didn’t have many symptoms. A little bit yes but, immediately trained hard with us and showed no issues. This is a positive thing. We have a problem with Theo (Walcott) because we are playing against Everton. Moussa (Djenepo) is still out with an injury so we have problems in the number ten position but Stu has an opportunity.”

With Brazilian forward Richarlison suspended following his red card against the RS, and skipper Seamus Coleman injured for maybe two to three weeks, Carlo Ancelotti had at least two changes to make to the side that fought back twice. The Godfather had suggested very quickly after the derby that Jonjoe Kenny rather than new signing Ben Godfrey would get the start at right back but, didn’t confirm this when he addressed the press on Thursday.

The Blues showed great resilience and character to take a point from the derby and had DCL not fluffed a gilt-edged chance and a Richarlison header not come back off a post, that much awaited victory over the old enemy could have been ours.

In his Thursday press briefing, Don Carlo regrettably advised that the blatant and unpunished, first minute body check by van Dijk on James Rodriguez had left the Colombian star with a knock tht he might not be able to shake off and he was a major doubt for the journey south but, would give him every chance to play if possible.

As to how he would re-structure the side in the absence of Coleman, Richarlison and possibly Rodriguez, the Italian maestro commented, “We have to put in other players who have the desire to play, we are working this week on this and I think we are going to choose a good line-up for the game against Southampton.”

Emphasising the role of the squad, he highlighted Alex Iwobi and the contribution the former Arsenal player can contribute. “Alex is a player who works hard. He is fast and with his quality he can help the team be better in certain situations. He [potentially] has an opportunity to play but also we have Bernard and Anthony Gordon. We have a lot of opportunities to replace Richarlison and James. We are already moving on.”

And looking pointedly at the game ahead he added, “It will be a tough game. Southampton is a team with a really clear identity. They try to play with high intensity without the ball. They are really compact and it is difficult to find space to play. We have to be smart and clever with the ball. If we are clever with the ball, we have a chance to win the game. To win against them you have to be 100 per cent and I would like to be at 100 per cent because our target is to win.”

On a bright, sunny afternoon, our referee was Kevin – won’t somebody please be my – Friend.

An early free kick to the home side saw Michael Keane head clear for a corner that was defended and a free kick given to the Blues, in their third strip of pale green. After a nice turn from Allan, a long ball from Keane was just too strong for Iwobi racing into space on the left flank. Excellent work then from DCL to retain possession and find Rodriguez came to nothing as the eventual cross into the area was meat and drink for McCarthy in the home goal.

Godfrey getting forward on the right saw his cross towards DCL, the ball falling to Iwobi and his cross shot being turned behind by Bednarek for a corner that came to nothing. The first real chance of the game came in the 12th minute as Bertrand got a cross in for Redmond that saw his shot screw across the face of goal and wide. The Blues responded with Rodriguez finding Iwobi for a shot that was deflected away for a second corner that was again defended by the Saints.

DCL was clattered by Bertrand to give the Blues a direct free kick that presented a shooting opportunity that Rodriguez struck powerfully to beat the wall but went straight at McCarthy. Just past the 18 minute mark, a good move involving Iwobi and Rodriguez saw Sigurdsson take control and fire in a dipping shot that beat McCarthy but hit the crossbar and go behind for a goal kick.

Another cross from Bertrand saw Armstrong with an air shot and when Saints came again down their left, Redmond blazed a shot into the stands. Hadenhuettl appeared to have set his side up to try and take advantage of Ben Godfrey being new to the Everton line-up, a number of Saints early forays forward having been down the youngsters flank.

Another cross from the left led to the ball coming out nicely for Romeu to strike and Jordan Pickford reacted well to beat away the deflected effort. But Southampton kept the pressure on and worked the ball into the Everton area for Ward-Prowse to fire a powerful shot low to the right of Pickford and inside the far post for the opening goal on 27 minutes.

Everton needed to find a way to get the midfield more involved and get some support up front for DCL who was looking isolated. Disappointingly, it was Southampton who made the most of their opportunities as Ings did well on the left to again get a cross in that went through to Adams who seemed to take an age before firing home with a deflection off Sigurdsson for two-nil on 35 minutes and set the Blues something of a mountain to climb.

Everton were saved the ignominy of conceding a third goal after Adams found Armstrong for a precise finish, Adams having rightly been ruled offside.

Everton won two quick corners as they tried to find a way back before the break and referee Friend turned away half-hearted appeals for a penalty for a push on Rodriguez by Adams. One added minute saw Godfrey overhit a cross towards DCL and the interval saw Carlo Ancelotti with some work to do.

The Don made his change for the second half as Bernard warmed up through the break to replace Alex Iwobi, hopefully to provide an injection of pace and width in order to provide some service to DCL.

Redmond was lucky not to see yellow for a lunge on Godfrey and he tried to breakaway down the right wing, the free kick too easily defended by the home side. Digne won a corner off Walker-Peters but poor play saw the opportunity wasted as Rodriguez strayed offside. Everton were a little lucky not concede a penalty as Godfrey appeared to take down Bertrand, VAR rightly ruling that Bertrand fell over his own feet.

Ten minutes gone in the second half and Everton still were not looking like a side that could recover the deficit. A free kick and yellow card for hand ball against Walker Peters blocking a cross from Digne gave the Blues a chance but a poor delivery from the normally reliable Digne saw the ball easily cleared.

On 58 minutes, Anthony Gordon and Fabian Delph came on at the expense of the disappointing Doucoure and Sigurdsson – Everton in desperate need of some inspiration.

Bernard cutting into the box on the right chose to look for a pass when a shot might have been a better option. A good block from Keane denied Ings an opening as the home side got forward after an error by Allan.

Another Saints raid saw Redmond feed Armstrong and his cross into the six yard area was just too strong for Ings, another escape for the Blues. Bernard saw yellow for a foul on Romeu. Everton with some better possession were still not making clear cut chances and the Saints defence looked comfortable dealing with the below par Everton attempts to get back into the game.

Twenty minutes to play and Everton were in need of some divine intervention and it went from bad to worse as Lucas Digne became the second red card in a week for a poor challenge on Walker-Peters on 72 minutes.

DCL was still trying to plough a lone furrow up front but getting very little service and latitude from the attention of both Vestergaard and Bednarek. Allan got back to concede a corner as the home side went for a third and Pickford was called on to tip a Vestergaard header over the bar.

Into the final ten minutes and Everton were looking bereft of ideas as to how to try and get even a late consolation, and with Southampton happy to knock the ball around before looking to find Ward-Prowse breaking into the area, the Blues were in for a miserable bus ride back to Merseyside.

Armstrong was replaced by French midfielder Ibrahima Diallo, making his debut, for the final five minutes, and then another debut for N’Lundulu coming on for Adams ahead of five added minutes being signalled.

DCL saw yellow for a clumsy challenge on Vestergaard, perhaps an indication of his frustration at the nature of the loss and being unable to make any impression on proceedings.

A late shot by Romeu saw Pickford need two opportunities to complete the save, and mercifully referee Friend blew for time to end the worst showing of the season by some margin by the Blues.