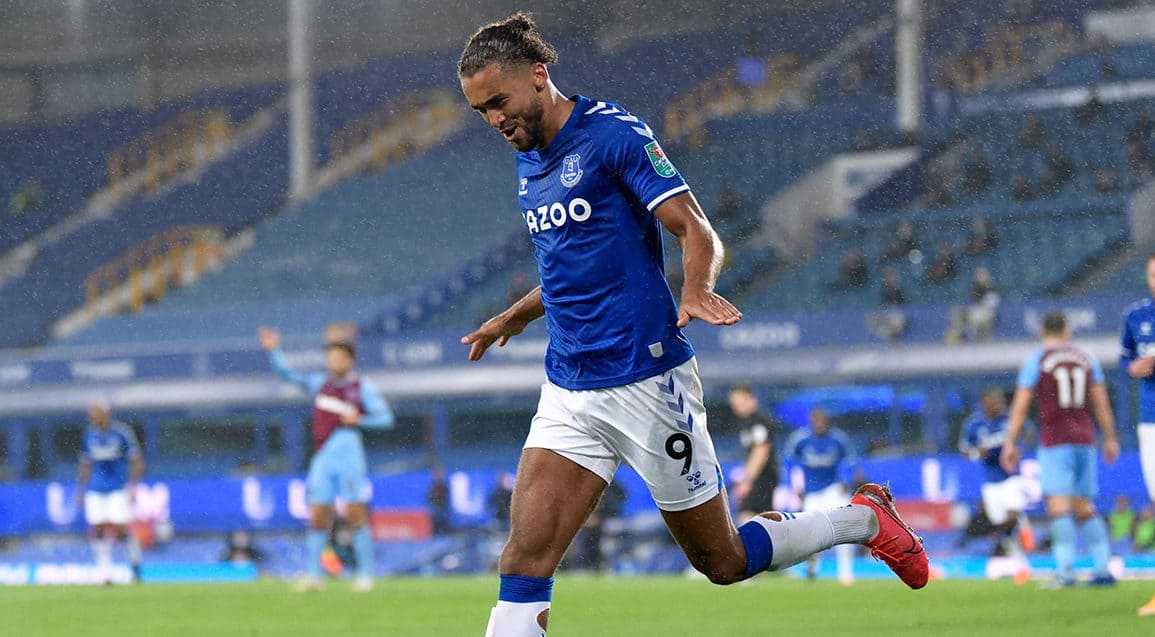 Injuries to Jonjoe Kenny, Richarlison and Allan took a lot of the shine off another polished performance from the Blues, a sixth straight win and another hat-trick haul from the very in-form Dominic Calvert-Lewin.

With Everton riding high in both the Premier League and iTunes chart, the pathway to the quarter-finals of the Carabao Cup saw West Ham United arrive at Goodison Park as the next obstacle to be overcome.

Ahead of the clash with the ‘Ammers, Blues boss Carlo Ancelotti reflected on his sides fifth straight win, with the 2-1 win at Crystal Palace, when he commented, “It’s really important to see the spirit in the team which is good in this moment and that is the reason we have started the season well. We have to look at the momentum and know that every game will be difficult. We have to keep the motivation we have shown on the pitch and ambition because we are doing really well but we have to know that the danger is behind us all the time. The spirit was fantastic but, we have to keep going to try to improve where we have to and be focused there. I’m really pleased what we have done in this first period of the season.”

With Salford City and Fleetwood Town already accounted for in this early cup run, the arrival of West Ham fresh from a stunning demolition of Wolves promised to present the Blues with a serious test of their resolve.

And looking forward to the cup tie, Carlo said in his programme notes, “West Ham will be strong in defence, with a lot of challenges and closing the spaces, but very dangerous on the transition with fast and skilful players up front. I can see in our squad the determination to keep going in the same way, being competitive in every game and trying to use our qualities to continue winning and having this nice feeling. Tonight we will again play in an empty Goodison and after the latest Government advice it seems this situation could be with us for longer than we hoped.”

The Irons were understandably buoyant after their 4-0 tonking of Wolves and with former Blues coach Alan Irvine still deputising for the Covid-stricken David Moyes, the team from the East End had no better incentive than to ‘win it for the boss.’ It goes without saying that all Blues fans wish former the Everton boss well, and a speedy recovery from this debilitating virus.

As well as Moyes, West Ham were without defender Issa Diop and midfielder Josh Cullen due to Covid, and would miss the services of defender Ryan Fredericks who sustained a hamstring strain in the thrashing of Wolves.

Midfielder Declan Rice was quick to pay tribute to the job done in the enforced absence of Moyes when he said, “I’m thrilled the backroom staff, with assistant Alan Irvine and coaches Paul Nevin, Kevin Nolan and Stuart Pearce stepping up as the manager had to take charge on Sunday from home, having tested positive for Covid-19 last week. I know they’ve been on Zoom calls all week and the manager’s been getting his points across to them, which they’ve been putting onto the training pitch. I couldn’t be any happier for the staff who were here tonight because they’ve stepped into the manager’s shoes brilliantly. It’s a collective effort and I’m delighted for the management tonight. I’m sure he’ll be buzzing. We’re in on Monday so he might join a little Zoom call with us.”

Our referee under the Goodison lights was Darren England.

Everton with plenty of possession in the opening exchanges, with plenty of crisp passing as the players settled into the game, West Ham with a couple of surges forward that saw the Blues get back in numbers to snuff out any kind of chance to the visitors. The first shot of the game going the way of West Ham as Lanzini found Anderson and he cut in from the left to line up a shot that Pickford gathered comfortably.

A lovely flick-on from Rodriguez on a ball from Keane played Kenny into space for a cross that was deflected safely into the arms of West Ham goalie Randolph. A superb, almost balletic, pirouette by Michael Keane took him away from Anderson and the England centre back then chipped an excellent ball over the top and into the path of Dominic (Inzaghe) Calvert-Lewin who took one touch before coolly slotting the opening goal on 11 minutes, a great start for the Blues.

West Ham tried to get back into the game with Anderson crossing to the back post for Yarmolenko but, his close control was poor and the Blues cleared easily. Lanzini went down looking for a penalty under a challenge from Keane however, the referee was having none of it.

Delph got forward into a move involving Rodriguez and Richarlison, his shot being charged down and cleared before great work by Niels Nkounkou saw his press and harry Yarmolenko back into his own half of the pitch.

Just before the twenty minute mark, the Blues were unlucky not to double their lead as Rodriguez took a ball from DCL to send Richarlison into space on the left and as he gained the penalty area, Randolph came up with an excellent save to push the shot just over the bar for a corner that was easily dealt with.

Rodriguez threaded a superb ball through the West Ham back line for Richarlison to beat Randolph through his legs but, the ‘goal’ was ruled out for offside. The opening twenty minutes though had been an excellent start for the Blues.

West Ham won two quick corners that both came to nothing before some good work from DCL put the visitors back under pressure. Haller failed to get on the end of a cross from Cresswell and Yarmolenko could only find Sigurdsson with a ball played back into the Everton area from the bye line. West Ham were just beginning to make a mark on the game, Yarmolenko putting a ball into the box that was just to strong for Lanzini. Everton responded with Rodriguez taking a pass from Sigurdsson to dance his way into the West Ham area to feed Richarlison on the right, his shot deflected away for a corner.

More good work from Nkounkou thwarted Yarmolenko as he looked to get a shot in, Richarlison also getting back to help out defensively. Just past the half hour mark, DCL took a ball out on the left and cut it to get past Balbuena only to hit a rising shot that was far too high to trouble Randolph.

Cresswell looked to find Haller with a cross from the left, Digne with a clearing header and Richarlison again helping out to deny Johnson any opportunity to get a second cross into the Everton penalty area. Anderson turned on the speed to trouble Kenny into conceding a corner, the Blues fullback going down before getting some treatment to his left ankle. Kenny got up was unable to carry on and limped off rather gingerly on 40 minutes to be replaced by Seamus Coleman.

West Ham were still looking to draw level and worked an opening for Cresswell to again cross from the left for Lanzini, his flicked header going wide of the far post. Into two minutes of added-on time and Everton tried to work an opening as Delph set Rodriguez going forward, Richarlison eventually sending in a cross that was easy for Randolph to gather.

West Ham caught Everton cold right at the start of the second half as they got the ball wide left to Anderson and he found Snodgrass to place a curling shot beyond the flailing arms of Pickford to tie the game up.

Keane found Rodriguez to twist and turn before playing in Richarlison on the left to crash a low shot off the foot of the neat post. Everton had responded well to being pegged back pressing West Ham back before DCL blasted another shot far too high over the bar.

Another flowing move by the Blues saw them climbing all over the West Ham defence, the ball eventually falling for Sigurdsson to shoot and Randolph again coming up with a good save, this time with his feet, to deny Everton.

The pressure tolled on 55 minutes as Richarlison cut in from the left flank, dummied the first shot and then fired the Blues back in front, courtesy of a deflection of the back of Declan Rice that saw Randolph completely wrong-footed.

The Brazilian went down a few moments later as he again worked defensively to deny Johnson, appearing to twist his left ankle and clearly rather painfully. He regained his feet and limped off to consider whether to carry on. He momentarily returned before going down and coming off on the hour mark, Alex Iwobi his replacement.

Snodgrass curled a cross to the back post for Yarmolenko to miss head across the face of goal where Lanzini arrived late to screw his effort wide of the target but, it was a warning to the Blues to stay alert.

A surging run by Rice ended in the corner with Allan going down clutching his groin area, this cup tie turning into something of a Bermuda Triangle for the Blues as he too appeared badly hurt and clearly was unable to continue, Abdoulaye Doucoure coming on for the final 21 minutes.

The question now was whether Everton would look to grab a third goal or shut up shop to defend the lead with West Ham sensing the Blues were a weakened opponent. Haller with an acrobatic effort saw Pickford turn the ball over for a corner with a quarter of an hour to play. The visitors earned a second corner but that too came to nothing as the Blues rearguard stood firm.

Everton countered with Iwobi feeding Nkounkou for a cross deflected away for a corner, Everton kept the pressure on and on 78 minutes, a curled shot from Alex Iwobi beat Randolph only to come back off the far post and fall sweetly for Dominic Calvert-Lewin to put the rebound away.

Into the final ten minutes and and the Blues scored an absolute peach of a fourth as Rodriguez, and Sigurdsson worked the ball into the area for the deadly Dominic Calvert-Lewin to complete his second hat-trick of the season with another assured finish.

With a three goal cushion, Everton were content to take their foot off the accelerator and push the ball around while still looking to add to their tally, Iwobi crossing toward DCL and West Ham getting the ball away. Cresswell with a late cross tried to find the head of Lanzini, the Argentinian who hasn’t scored since Adam was a lad, unable to trouble Jordan Pickford. Three added minutes saw West Ham again throw a long cross in the direction of Yarmolenko, a corner earned off Digne ended with Rice seeing a shot deflected wide for another set piece.

The injuries aside, this was a victory for the squad with Gylfi Sigurdsson and Fabian Delph both showing glimpses of their true potential and Niels Nkounkou again shining in the left back role.