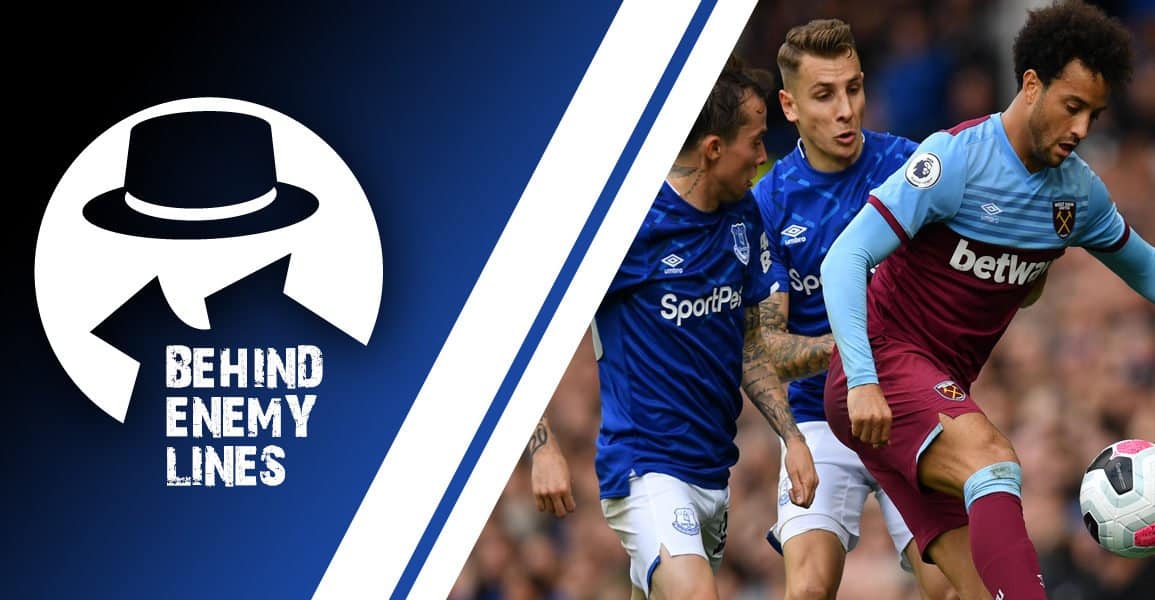 Carlo Ancelotti’s Everton hype train is gaining steam, and Evertonians are starting to get really excited, as indicated by the fact that at the time of writing, Spirit of the Blues and Z-Cars sit at #1 and #2 respectively on the iTunes UK charts.

Next up for the Toffees is West Ham in the Carabao Cup, who after losing their first two Premier League games of the season, stunned Wolves 4-0 at the London Stadium behind two goals from emerging Englishman Jarrod Bowen.

West Ham were lucky to avoid relegation last season, after the mid-season hiring of former Everton boss David Moyes did not do too much to change the Londoner’s fortunes.

The club has been engulfed in an ongoing ownership controversy, with fans and even the West Ham Club Captain, Mark Noble, lashing out at owners David Sullivan and David Gold for not only their lack of investment in a struggling squad this summer but also in the sale of promising academy graduate Grady Diangana to West Brom for a marginal fee.

The mood may have changed, however, after the shock pummelling of European hopefuls Wolves.

I talked to Twitter legend and massive Hammers fan account West Ham Central to see how the fans are feeling about the season after such a huge result.

Q: West Ham endured quite a tumultuous season last year. What do you think the Hammer will place at the end of this year’s campaign and what do you consider an acceptable finish?

A: It will be another relegation battle unless we really kick ourselves into gear in this last week of the window.

Q: How surprised were you by West Ham’s 4-0 win over Wolves on Sunday? What did they do differently to get that incredible result?

A: I was gobsmacked. I was expecting the worst, as I predicted a 0-3 loss. We played with 5 at the back which seemed to work. We were unlucky against Arsenal playing the same system so it seems the only way forward.

Q: How much of a priority are cup competitions for West Ham this season? Do you expect David Moyes to put out the first-choice XI for Wednesday’s match?

A: Staying in the Premier League is certainly the priority. I expect Moyes to play our “B team” again, which is probably more expensive than our first team! The likes of Haller, Yarmolenko, and Anderson should feature again as well as a few youth players.

Q: What are your thoughts on Everton’s transfer business this summer and how does that make West Ham fans feel about the GSB situation?

A: Everton have smashed the transfer window this summer. They recognized a problem area and sorted it while not breaking the bank. All three midfielders are top class and I am jealous! GSB are nothing compared to Moshiri and Kenwright.

Q: Who will win on Wednesday at Goodison Park and why?

A: Everton. I think it will be a close game but I feel Richarlison and Co. may be too much for us, especially as you are on a 5 game win streak and show no signs of stopping.

So there we have it! It should be a very interesting contest between West Ham and Everton, and we’ll see how Carlo Ancelotti decides to approach squad rotation considering that we are playing Premier League opposition in the Cup for the first time. West Ham will not afford us the luxury of making 10 changes and getting away with it. I personally agree with Central and think Everton will squeak out a win. I’m going for Everton 3-1 West Ham with the game remaining in the balance for most of the 90 minutes. My thanks again to West Ham Central who you can find on Twitter @WestHam_Central. Up the Toffees!