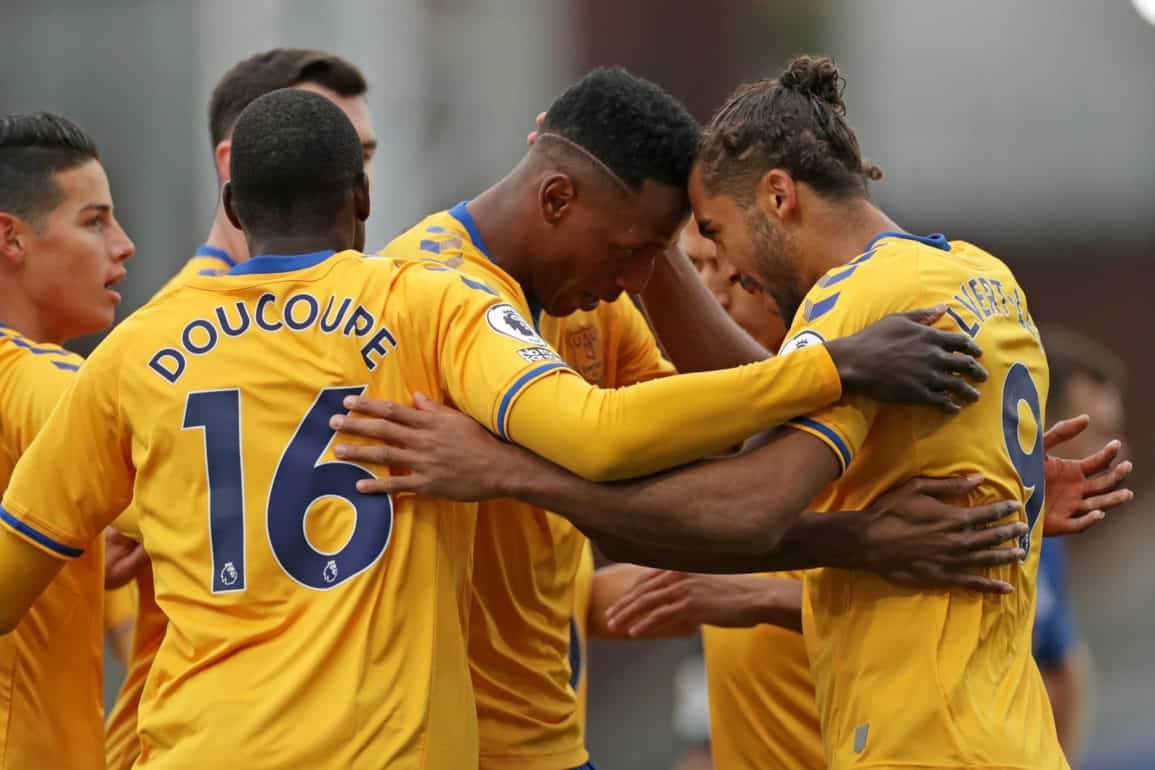 VAR came to the aid of Everton as having taken the lead through Calvert-Lewin, they’d been pagged back and the video replay saw a controversial penalty go the Blues way.

Two of the current form teams of the early Premier League campaign met as Roy Hodgson and his Eagles welcomed Carlo Ancelotti and equally high-flying Everton to Selhurst Park, and after four straight wins, this promised to be the toughest test so far for the resurgent Blues.

And with the prize for the winners being clear leaders of the Premier League at full time, a high octane encounter was widely envisaged, again it’s such a shame Selhurst was packed to the rafters and rocking for this clash.

Roy Hodgson has some fitness issues to deal with before naming his side as despite the boost of having Belgian striker Christian Benteke available after a recent foot injury, the veteran manager was likely to be without four defenders as Gary Cahill, Patrick van Aanholt, James Tomkins and Nathan Ferguson were all ruled out of contention to feature.

Hodgson paid tribute to the pulling power of his opposite number Carlo Ancelotti when he commented, “I thought they were a little bit unlucky last year not to finish higher than they did, because last year they were a good team, too. But there’s no doubt that the players that they’ve brought in this year have made a considerable difference. And of course, getting [André] Gomes back from injury has probably helped as well. But I think the signings of Abdoulaye Doucouré, James Rodríguez and Allan are three excellent signings. They are made-to-measure signings; they are the signings that Carlo has made in tandem with his board of directors, which have filled in the slots that he thought really needed filling in. They’ve added to their attacking threat too and certainly, [Dominic] Calvert-Lewin gets better every year. Richarlison, of course, another one who gets better.”

For Ancelotti, the win in midweek at Fleetwood saw improved showings from Alex Iwobi, Bernard and a welcome return to first team action for Fabian Delph, although none were expected to make the starting line-up to face Palace. The only slight issue, other than the long-term absence of Holgate, Branthwaite, Gbamin and Tosun, centred on Dominic Calvert-Lewin who was substituted at half time against the Cod Army.

The Godfather commented, “Dominic is okay, he has no problems. He had a little problem in the game against Fleetwood but he recovered well. He is fit and he is going to play.”

On Delph, the Italian maestro noted, “Fabian was out for a long time and he recovered well, properly. He played more than 60 minutes really well (against Fleetwood). I want to give him more training sessions to be ready to play in the Premier League. He will not travel with the team to Palace because I prefer to keep him [at USM Finch Farm] to train and be ready for the game against West Ham.”

And on the centre back position with Holgate and Branthwaite out for some weeks, he added, “We are looking for a centre-back as, in this moment, in the squad we have only got two available – Yerry Mina and Michael Keane. If there is an opportunity, I think we are ready [to bring someone in].”

Finally he noted what all Blues fans wanted to hear and read, “The others are all in good condition – fit and available.”

And so for this top of the table clash, Carlo went with what many see as his first choice eleven: Pickford, Coleman (c), Mina, Keane, Digne, Doucoure, Allan, Gomes, Rodriguez, Richarlison and Calvert-Lewin.

Toting watches, whistles, foam spray and assorted coloured cards was our referee, Kevin (won’t somebody please be my) Friend.

Everton in their all new amber/gold away kit conceded an early corner with Zaha immediately into the action for the home side, Sakho offending at the set piece saw the chance wasted. The Blues first effort saw Rodriguez get forward to collect a ball from Keane and his ball into the area fell for Doucoure but he didn’t get a good contact, and the ball was an easy gather for Guaita.

A great move saw the Blues open the lead inside ten minutes with James Rodriguez the architect, taking a ball from Doucoure and feeding it beautifully into the area for Coleman to collect and square into the danger area where Dominic Calvert-Lewin was perfectly placed to side foot home his fifth goal of the season.

Palace tried to get themselves back into the game and won a second corner that was defended well. Eze was looking to combine with Zaha, pace and directness from both with Townsend in support, but the Everton back four were looking sharp and coping well with the threat being posed.

As rain began to fall, Everton won a corner after build-up play from Gomes, Richarlison and Digne, Palace worked it clear as the short corner routine between James and Digne didn’t work too well. Mitchell needed some treatment after tangling with Seamus Coleman ahead of Zaha picking up a yellow card for an off-the-ball clash with Yerry Mina.

After such a good start, Everton conceded an equaliser from a corner from the right taken by Townsend as Kouyate got between Richarlison and Keane and his 26th minute header beat Jordan Pickford to tie the game up.

A quick break by the Blues saw Richarlison race forward onto a ball from James, the Brazilian crossing and the ball hitting the arm of Ward, VAR deciding in the Palace defenders favour. Everton were looking to pass their way through the Palace midfield and McArthur got a lecture from referee Friend for a clumsy challenge on Gomes. It was an enthralling game, Palace looking to utilise pace where Everton were employing a more cultured approach.

VAR again reared its ugly head as Ward again saw tv replays employed in the awarding of a penalty against him. A long ball found the head of Digne, the ball struck the arm and in all honesty, even from an Evertonian perspective, it was a harsh decision. Richarlison off a stuttering, short run-up putting the spot kick high to the keepers right to regain the lead.

The intervention of VAR and the controversy the awarding of the Everton penalty caused detracted from what was and had been an entertaining encounter, Palace playing directly and at pace, Everton building from the back with James Rodriguez at the centre of most things, Doucoure and Allan anchoring the midfield and Andre Gomes roaming forward to support the two up top.

Despite the disruption and controversy, Everton deserved their half time lead and Carlo Ancelotti would have been much the happier manager at the break.

No changes by either manager for the second stanza with Palace do doubt still aggrieved over the way they trailed Everton. An early free kick wide right by Townsend saw Pickford punch clear and Palace won another free kick when Allan brought down Eze, the chance again saw Sakho climb illegally. Everton got forward to win a corner on their left, James taking it to find DCL but this time he couldn’t direct his effort on target.

It was end-to-end stuff as Palace raced away to win another corner that Townsend swung in, the ball coming out to Eze but his tame effort sailed aimlessly over the bar and into the empty terracing. The pace from both sides was making for an entertaining start to the second half and a nice ball down the left from Richarlison saw Digne worry the Palace defence into conceding another corner that saw DCL rise and Sakho hoof clear to get Palace going on a breakaway through Zaha, Doucoure getting back to avert the danger.

Everton were playing nice triangular passing moves, working the ball left to right and back again, searching for the openings as the cold rain continued to fall. Roy Hodgson was grimacing against the cold while Carlo Ancelotti in his blue hoodie looked on calmly as his team went about their work.

Richarlison was booked for a clumsy challenge on Townsend just before the hour mark as Palace began to up their work rate and Pickford was called upon to punch another Townsend corner to safety, Ward recovering the ball to send in a low cross from the right that went through the Blues six-yard area.

Ayew drew a clumsy foul from Mina to give the home side another set piece opportunity from their right, Townsend again the taker looking for Kouyate at the back post and Everton grateful to see his header go behind with Pickford start-jumping reminiscent of Tim Howard.

A sweet backheel from Richarlison set Digne into space on the left, his cross met on the volley by James, his shot being blocked. Palace countered down their left through Mitchell, his cross well claimed by Pickford. A slip by Mina saw the Colombian gave Palace another free kick in a dangerous area, Eze trying to get Zaha in and Everton eventually clearing their lines. A poor pass from Doucoure played Allan into trouble and another free kick went the way of the home side who were straining every sinew trying to get level.

Into the final twenty minutes and it was now a rearguard action by Everton as they defended the free kick and another Palace corner to get the ball into midfield where they could slow the game down and take a bit of a breather. Meanwhile Palace prepared their first change, Batshuayi replacing Eze on 74 minutes. Moments later, Kouyate took a knock from DCL and the stoppage while he got some treatment saw Andre Gomes withdrawn, Gylfi Sigurdsson his replacement.

A nice move involving Sigurdsson, James and Richarlison saw the ball into the box for DCL, Palace doing enough to deny the in-form striker a clean hit. The pace of the game was still high, Palace working their socks off and Everton matching them with a determination not seen for quite a few seasons.

DCL, still full of running, chased a long clearance from Pickford to win a free kick and Palace made another change, Benteke replacing Ayew for the final eight minutes plus added on time. The Blues free kick came to nothing as Allan fired miles over the bar. Doucoure driving forward with Coleman saw the Irishman win a corner on the right, James swung it in and Guaita punched it clear. Alex Iwobi appeared on the sidelines as Doucoure again drove forward to find James, a rare mis-control by the Colombian wizard saw him lose possession, and that was his last action as Iwobi replaced him on 86 minutes.

James McCarthy brought down Sigurdsson to give the Blues a free kick wide on the left that came to nothing but, the Blues kept the ball in Palace territory to kill off some more valuable time.

Everton responded with a late cameo appearance by Tom Davies at the expense of the penalty scorer, Richarlison as four added minutes were signalled.

Try as they could, Palace couldn’t find a way through a resolute Everton midfield and back four and referee Friend eventually blew to his whistle to end an entertaining game with VAR the inevitable talking point. Everton will take it though and sit proudly atop the Premier League table.