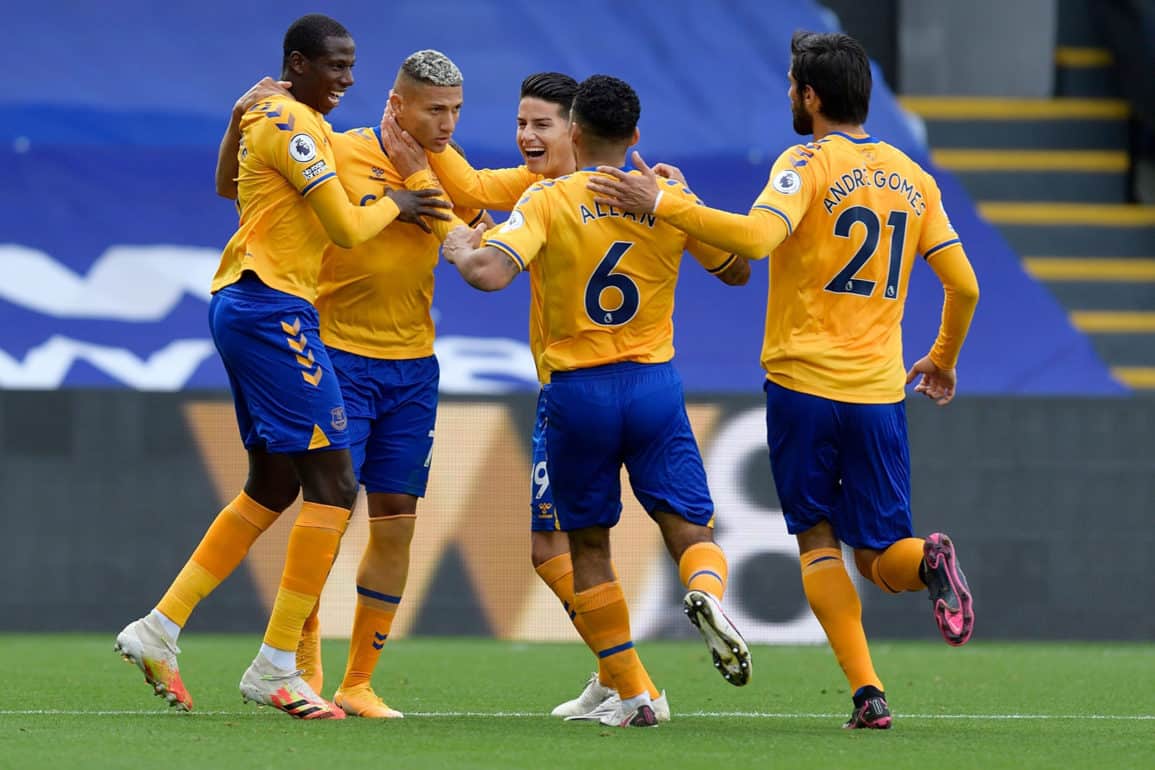 Despite some initial suspicion from Everton twitter regarding Pickford’s effort on Kouyate’s headed goal, it was an unmarked header from 6 yards out, and Jordan had no option other than to just swing an arm at it and hope to tip it off the bar or over. The goal was simply a result of bad marking from a set-piece; deja vu. Pickford did what he needed to do today in my opinion, including apparently learning from his midweek mistake and booting the ball out first time on essentially every occasion.

I thought Seamus Coleman was outstanding today. Yet again he was tasked with a very quick and tricky winger with a lot of quality in Wilfried Zaha, who barely got a sniff today. Coleman worked tirelessly up and down the pitch, and made a great run that was met by James’ perfectly weighted through ball before slotting it across to Calvert-Lewin for the opener. Seamus Coleman looks a player rejuvenated this season, and he has stepped up as the leader of the squad. Club captain and rightly so.

I thought Yerry Mina did well today. He gave away quite a few free-kicks, yes, but he dealt with almost all of them himself, making many important headed clearances and tackles. Not an unbelievable performance, but he was certainly not the center back I was the most concerned about today. Overall, a solid performance at the back from King Yerald.

This could be seen as a tad harsh, but I have to give Keane a lower mark considering that his poor marking and botched attempted clearance was the cause of Crystal Palace’s equalizer in the 26th minute. Otherwise, he played alright, but in my opinion, Yerry Mina was more assertive in defense and was subsequently more important in holding Palace scoreless after Keane’s error. Keane also failed to make his presence known on any attacking set-pieces. Not his finest game, but nothing too atrocious either.

This was the kind of game where Lucas Digne’s incredible quality can’t always shine through, but I think he handled the defensive aspects of the game quite well and won quite a few headers. He also got into good positions going forward, and his headed pass to Richarlison which came off the arm of Joel Ward was ultimately what won Everton the game. Not a vintage display from the left-back, but he was more than good enough in defense and attack.

Abdoulay Doucoure never quite seemed to settle in this game. He made the exact same mistake twice in the first half, trying a pass from the right side back towards the middle which was intercepted by an onrushing Palace attacker both times, and was desperately lucky that Everton were not punished for those mistakes. He did make a very good recovery tackle on Wilfried Zaha on the break, but I can’t give him more than a 6 considering the number of times he lost the ball in our half and in our final third.

I thought Andre Gomes was quite good in this game, and his quality of passing was clear to see from the off. He sprayed some beautiful balls around in the first half but failed to really stamp his mark on the second half, leading to his exit in the 76th minute. His link-up play was good and he was very composed on the ball. By the end of the game, however, it was not an affair that suited him, as Everton needed fresh legs in the midfield to try and regain control of the game in the closing stages, which I think the introduction of Gylfi Sigurdsson definitely helped accomplish.

Allan did what he needed to do today, but he definitely did not assert himself in the way he did at Tottenham Hotspur Stadium during Everton’s last trip to London. During the second half, Everton were being overrun in midfield and Allan was a bit absent amongst that. Once Sigurdsson came on, Everton regained control and Allan re-asserted himself, but I still don’t think it was the Brazilian’s best performance. However, I’m still fully convinced that Allan is the player we desperately lacked last year and I’m sure he’ll be crucial to our ambitions this season.

What a player James is. He’s simply supreme. This game was probably a bit too much of a grind towards the closing stages for James to shine through, but his ball to Coleman which led to the first goal was absolutely sublime, and it was not hard to see that his quality was just unmatchable by anyone else on the pitch. He was a little bit absent in the second half, but found himself in a great position just outside the box before being brought down by James McArthur right before lining up a shot that I have no doubt would have hit the back of the net. Eventually, after a good shift, it was easy to see that James didn’t have much left in the tank and was replaced by Iwobi for the final 4 minutes plus stoppage, a change I personally think could have come earlier due to the Colombian star’s tired legs.

Richarlison is not a player to do anything but give 100% effort in every match he plays. He worked incredibly hard, making interceptions and tackles in support of Digne, as well as bombing up the left side, winning freekicks, and fashioning opportunities. I thought his combination play with Lucas Digne was great, and he eventually blasted home the winning goal from the penalty spot in the 40th minute. He desperately deserved that goal, and hopefully will kick on and notch plenty more in the coming season. Match-winner.

One-touch finishing. That is what Carlo Ancelotti has been drilling into Everton’s number 9 since his arrival, and it paid off yet again today, with DCL writing his name on the score sheet after 10 minutes by doing just that. He could’ve easily had another on multiple occasions, but nonetheless, it was great to see Everton’s talisman continue his rich vein of form. He put in some hard yards today and did very well despite being isolated upfront for many parts of the game. He won many headers and fouls while being Everton’s only out-ball for many parts of the second half, and his work was instrumental to the ability of Ancelotti’s side to close out the game and secure all 3 points. Another incredibly encouraging performance from a man who really deserves an English cap. All eyes on you, Gareth Southgate!

Although I usually prefer not to grade players who play for such a short period of the game, I actually thought Sigurdsson’s introduction was a decisive moment in the match. He entered the fray during a period in which Palace were bossing the midfield and Everton could barely get a whiff of possession. Sigurdsson, although unsurprisingly decided to pass backward on a few occasions, was a key part of Everton regaining authority in the midfield, and helped Everton kill the final 10 minutes or so with relative ease. Overall, I think Gylfi did exactly what he needed to do, and so I’ve given him a 7.

Alex Iwobi (On 86’) – N/A
Iwobi had little to no impact on the game, which I don’t think he can really be faulted with considering the situation the team was in. He was brought on to run, which he did, and other than that did not really find himself on the ball many times. This is a classic instance of a player in which I won’t give a grade.

I don’t think I really need to explain this one considering what I just said. Maybe this 4-minute cameo was Carlo’s way of putting him in the shop window for Southampton, which is a move I’d love to see. Fingers crossed.