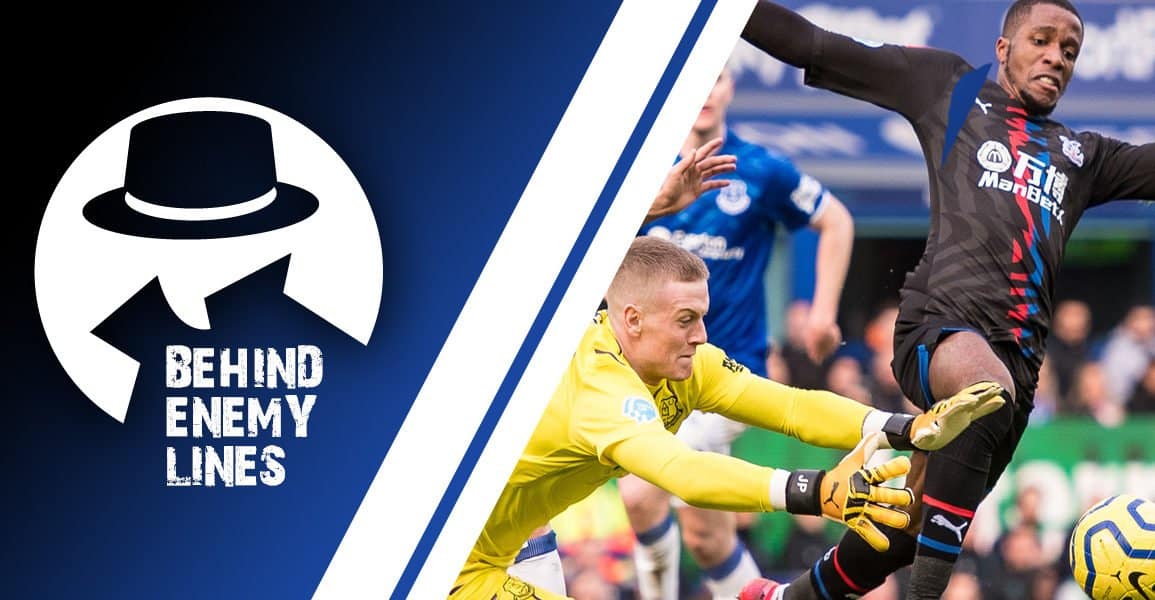 Behind Enemy Lines: Crystal Palace (A)

After 4 consecutive domestic victories to start the campaign, Everton now turn their attention towards Crystal Palace, one of the other sides that is proving to be a surprise package so far. They too have won both Premier League games of the fledgling season, beating Southampton 1-0 at home, before traveling to Old Trafford and stunning United 3-1 in the Red Devils’ first game of the season.

Many tipping Palace for a relegation dogfight have slowed their roll, and it seems Palace may actually be comfortable survivors this season, if these two weeks are anything to go by. It remains to be seen how indicative the first two games are of where both Everton and Palace will actually finish in the table.

To try and clear up how Palace fans are feeling through all of this, I spoke to writer Jack Piece from the FYPFanzine and asked him some questions about Palace, Everton, and the clash this weekend.

Q: Palace ended last season in awful form, losing 7 and drawing just 1 of their final 8 matches. However, they have burst out of the gates during the first two weeks of the new campaign. What has changed and is it sustainable?

A: We’ve changed shape slightly in that it’s a two up top rather than a three with Wilf Zaha moving inside and supporting Jordan Ayew. We remain very disciplined in terms of our shape as displayed in our first two games but we do look more effective and more of a threat when we have the ball. It’s sustainable if key players remain fit but the start will give Roy and squad confidence that this new approach is one to stick with.

Q: How surprised are you by this sudden revival and how does it impact your predictions and expectations for Palace’s season and final standing in the table?

A: I thought we’d finish mid table and I still think that we will but it’s pleasing to have maximum points after two games – the first time Palace have such a luxury in the Premier League era. If there is a surprise, it’s that we look a far greater goal threat than we did towards end of last season. Wilf moving inside has proved very effective as it has done when Roy’s experimented with that before.

Q: Many tipped Roy Hodgson to win the sack race this season, but now that seems unlikely. What is the general opinion of Hodgson among Palace Supporters and how much has that changed in the last two weeks?

A: Roy is very well respected among all Palace fans. I think there was a weariness of his pragmatism at times last season but in fairness to him, a combination of injuries and a small squad to begin with didn’t afford him the flexibility to play anything other than defensively for some of the season. I think we’ve been lucky to have him in charge for as long as we’ve had him and do worry that the transition to a new manager, possibly next summer, could destabilize Palace.

Q: What are your thoughts on Everton’s transfer business over the summer and where do you see us finishing in the table?

A: As a son of a devoted Toffee, I watch Everton games with somewhat blue tinted glasses and was just hoping you’d sort your midfield out in the summer. You most certainly have done that. The guile of James, the work rate of Doucoure and resilience of Allan will add a huge amount of quality to the squad and Ancelotti cannot say he’s not been backed. The young left back from Marseille also looks very good and will provide competition for Digne, who I rate as one of the best left backs in the league.

Q: Who do you think will win the match at Selhurst Park on Saturday and why?

A: Given both team’s starts, they’ll both be going for the win but I could see a score draw. If Everton have shown a vulnerability in first two league games, it’s players running at you centrally and with Wilf leading the line, there’ll be plenty of that. Despite our disciplined shape, I expect your attackers to create chances too. 2-2.

So there we have it! A draw sounds reasonable to me as well, as both teams won’t want to lose the momentum they have been building thus far, but a win for either side certainly isn’t out of the question. If one team does take all the spoils for themselves, it’s safe to say the excitement surrounding their respective club will grow even more. My thanks to Jack for taking his time to answer my questions! You can find the FYP Fanzine on twitter @FYPFanzine. I personally am remaining optimistic and would be over the moon with a victory for the Blues on Saturday, but either way, I think we will learn a lot about this Everton side, and Palace too for that matter, when push comes to shove at Selhurst Park.