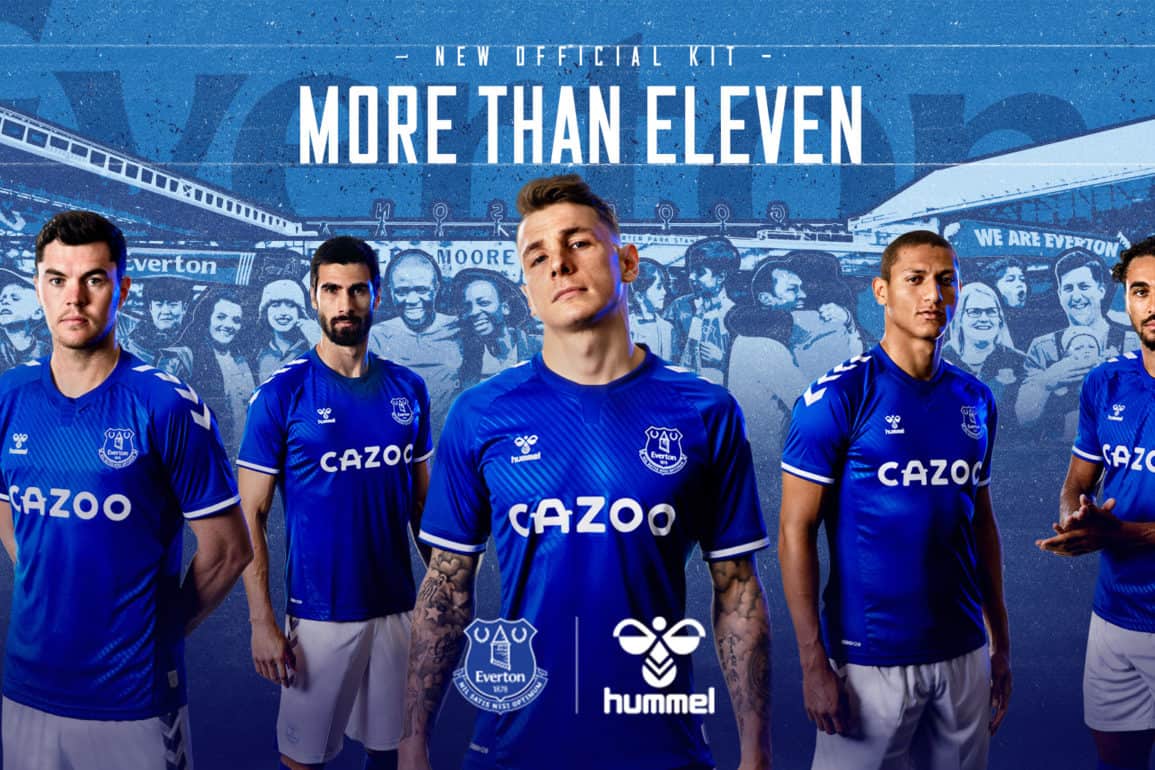 Everton and hummel have unveiled the new 2020/21 home kit.

It’s £55 and available to pre-order for delivery by clicking here.

The new 2020/21 home kit will include hummel’s iconic chevrons across the shoulders and sleeves of Everton’s famous royal blue jersey for the first time.

The kit pays tribute to the Club’s iconic Z-Cars anthem with an image of the song’s soundbar expanded and embossed diagonally across the shirt. Finished with slick blue and white piping on the sleeves and a round neckline, the look of the shirt is clean and minimalist.

The traditional white shorts feature the hummel chevrons in blue contrast on the outer leg. The kit is completed with white socks complementing the rest of the strip with blue chevron detail on the front.

In a first for both hummel and Everton, the traditional long sleeves on the Goalkeeper’s shirt will be replaced with short sleeves. The Goalkeeper’s jersey, which has seen design collaboration with the Club’s keepers, will also be available in youth sizes. Its bright, bold colours complement a graphic depicting the sound waves of high-tempo dance beats, reflecting the speed and intensity of a Premier League game.

As part of the Everton for Change initiative – the Club’s commitment to reducing its carbon footprint and raising environmental awareness and sustainability – all of Everton’s home, away and third kits for the 2020/21 season will take advantage of hummel’s ZEROH2O dry-dye technology.

This ground-breaking technology ensures there is zero water consumption and zero wastewater during the dying process, and a 50% reduction in energy consumption. This means that the 25 litres of fresh clean water normally required to dye just one single shirt is saved for each jersey produced.

Alan McTavish, Commercial Director at Everton, said: “We are excited to be launching our first kit with hummel as part of our new partnership. hummel has demonstrated its commitment and passion for Everton by delivering a bespoke, original design that is guided by the rich traditions of the Club. The creative tribute to Z-Cars that is incorporated into the design will resonate with our fans across all corners of the globe. It is also testament to hummel’s determination to deliver something truly unique and special for our fans.”

All of Everton’s kits will form part of hummel’s ‘More Than 11 campaign’, which recognises that football is much more than the eleven players on the pitch – it is the millions of fans in and outside the stadium and the local and international community in which football has a role to play. It is about the powerful bond between Everton and its fans, and the unrivalled passion of the Everton family that spans the globe.

Allan Vad Nielsen, hummel’s CEO said: “We are very proud of our association with Everton and the Club’s legacy in English football. It was important to have this reflected in the first home kit whilst tapping into the iconic personality of the club.

“The result is a pure and classic Everton shirt with subtle references to the match day experience at Goodison Park. We hope that the kit will be well received by all the Evertonians and we are looking forward to celebrating many victories together wearing the new jersey.”

The 2020/21 home kit is also the first time that new main partner Cazoo features on the front of an Everton shirt, after their multi-year partnership with the Club was announced last month.

Goalkeeper Jordan Pickford said:“I’ve loved having an input into how this year’s Goalkeeper’s kit looks. The team at hummel really listened to what we like to play in, in terms of both colours and the short sleeve style.”

Striker Dominic Calvert Lewin added: “The sound of Z-Cars is synonymous with Everton and Goodison Park – and we’ve really missed the fans at our games over the past few weeks. I really like that the detail of the soundbar is woven into the shirt itself. Hopefully next season we’ll be wearing this kit and walking out to a massive roar at a packed Goodison Park as Z-Cars booms out.”