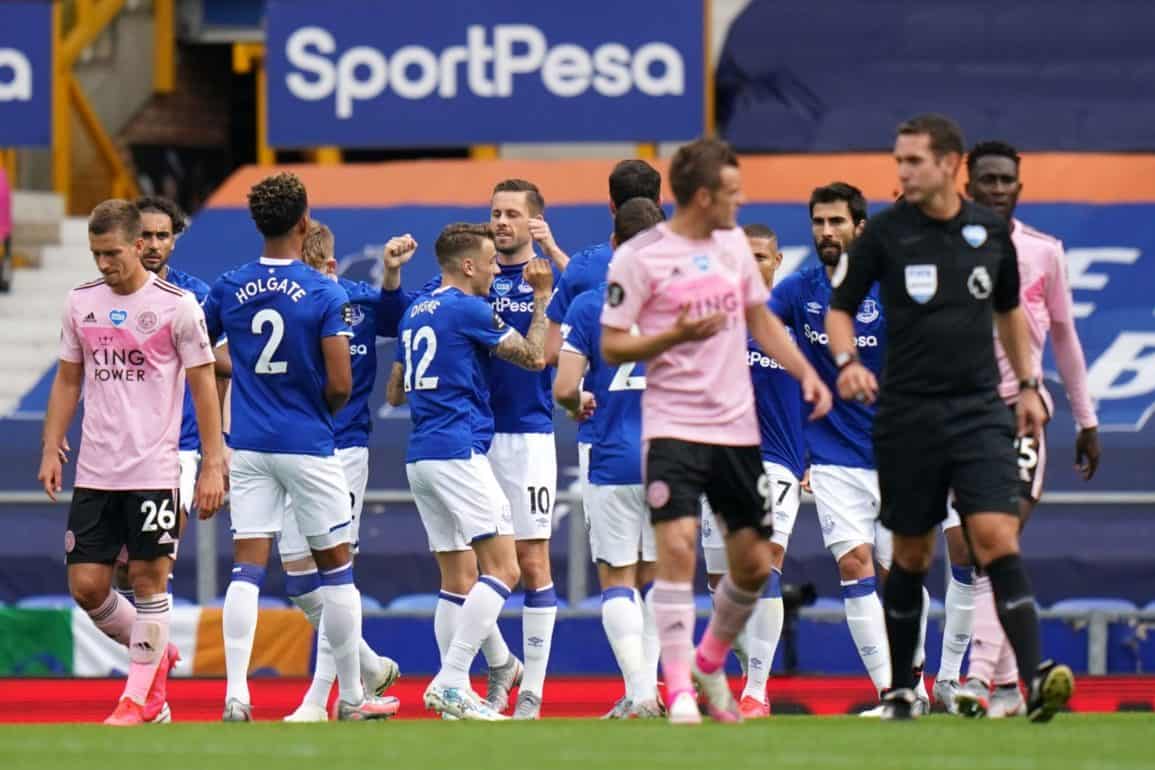 Early goals seal the win, Keane again excellent at the back.

Two goals in the opening quarter of an hour, from Richarlison and a Sigurdsson penalty set Everton on the way, but it needed a strong defensive showing second half as Leicester made them earn the points.

A second early evening kick-off for the Blues as an out of form Leicester City were the visitors to Goodison Park for the third game of their respective Project Restart fixtures.

The Blues hadn’t played since they won at Carrow Road while the Foxes were hurting from exiting the FA Cup last weekend thanks to former Blue Ross Barkley netting the only goal of the game as Chelsea proceeded to the final four.

Everton prepared for the game with injury and fitness concerns over Djibril Sidibe, Fabian Delph and Theo Walcott but, were boosted by news that central defender Yerry Mina had recovered from a muscle problem and was available for selection.

Manager Carlo Ancelotti speaking in his pre-match media video session confirmed, “Only Yerry Mina is back [for the Leicester game]. Fabian Delph is still injured. He is doing individual treatment and training. I don’t know exactly when he will recover fully. Djibril Sidibe will be back in training on Friday and Theo on Monday. It will be very important to have those players available. We are beginning a period where we will have a lot of games so it will be important to have a strong squad available.”

With Project Restart draws against Watford and Brighton followed by last weekends FA Cup exit to Chelsea, the Foxes haven’t won since they thrashed Aston Vanilla 4-0 back on March 9th, their only win in their last seven Premier League outings.

Manager Brendan Rodgers had injury concerns with both James Maddison doubtful and Ricardo Pereira unavailable for selection. However, the former RS boss remains bullish of his sides ability to maintain their challenge for a top four finish when he said, “Obviously, the break has disrupted us a little bit, but I have great confidence in the squad. We have to live with that expectancy and the fact that’s there means they’re doing something right. If a little bit of negativity comes, that’s fine, but they have to just focus on improving and getting better. With seven games to go, we’re in an absolutely brilliant position. We’ll be focusing on us, staying in the present, and looking to get the three points.”

Rodgers was desperate for centre forward Jamie Vardy to get back to scoring ways, the former Fleetwood Town striker needing one more goal to reach a hundred in the Premier League.

Our referee on a bright sunny evening was David Coote.

Leicester on the front foot early doors with Tielemans trying to get Vardy in on goal, but Jordan Pickford was alert to the danger and got to the ball first. A fairly even opening ten minutes then saw Everton open the scoring with their first attack, as Anthony Gordon threaded a ball into the area for Richarlison to meet twelve yard out and power the ball past Schmeichel a nice move and a cool finish from the Brazilian.

Leicester responded with Praet shooting and Pickford taking no chances in tipping the ball around the post at the expense of a corner that came to nothing.

Everton got back down to the Park End and a ball into the box saw Ndidi jump with DCL but raise his arm and concede the VAR reviewed penalty, the first of the season for Everton, which was coolly slotted home by Gylfi Sigurdsson. Just over a quarter of an hour gone and the Blues two goals to the good.

A through ball for DCL saw him into the Leicester area but a good old fashioned shoulder charge from Soyuncu averted the danger for the visitors.

Leicester steadied the ship and tried to get back into the game but the Blues were looking calm in defence and looking to go forward in search of a third goal. Both sides swapped free kicks and corners before a cross from Digne found Michael Keane, the defender putting his header just too high. Leicester responded with Evans having a shot saved and Albrighton seeing a shot well blocked by the Blues defence, and Justin firing wide of the target.

Into the final five minutes of the first half a through ball from Soyuncu saw Vardy caught offside, Chilwell found Barnes only for him to fire high and well wide of the target and Everton countered with Digne taking a feed from Gordon to find Richarlison only for his attempted shot to skew off his right foot and run harmlessly into touch. A good half from Everton saw them retire to the dressing room with our first two-goal interval lead of the season.

Two changes for the Foxes at the restart saw James Maddison and Iheanacho replace Barnes and Praet respectively as Rodgers needed something to change and quickly against an Everton side that looked perfectly set up by Carlo Ancelotti.

Iwobi with an early cross found DCL, his shot was charged down and it came out to Digne and his shot was deflected and Schmeichel had to react quickly to concede a corner that was cleared.

Leicester reduced the areas five minutes into the second half as a ball into the box from Tielemans wasn’t dealt with and Iheanacho got to the loose ball and force it beyond Pickford and inside the far post.

Ndidi saw a yellow card for a foul on Richarlison when trying to get to a ball from Tielemans, the Brazilian needing treatment for what looked a painful challenge.

On 56 minutes, the Blues made a change bringing Tom Davies on for Richarlison who limped off rather gingerly – the change meaning the Blues reverted to a 4-5-1 formation from the starting 4-4-2.

Maddison saw a shot blocked by Keane and moments later a through ball from Tielemans found Albrighton and his low cross saw Keane take the ball but nearly into his own net but, he stretched to clear off the line – a worrying moment. Keane was at the centre of everything deflecting another Maddison shot away for a corner as Leicester began to get the upper hand, certainly in terms of possession.

A long cross from Albrighton saw Vardy nod the ball back to Iheanacho who lifted the ball over Keane and then blazed his short range shot high over the bar.

DCL was harshly adjudged to have fouled Evans as the defender went down very easily and the Blues made a second change on 68 minutes, Yerry Mina returning to first team action replacing Alex Iwobi – an indication that Carlo Ancelotti clearly felt a need to strengthen his rearguard for the final 22 minutes.

Mina took the central position between Keane on the right and Holgate on the left with Coleman and Digne able to move up to get closer in support of the midfield.

Jordan Pickford was booked for time-wasting at a 74th minute goal kick before Maddison worked his way into the Everton area to cross for Chilwell to thrash his shot high and wide.

A long ball out of defence from Keane saw DCL do well to win the ball and find Gordon who relayed it on to Digne but the move broke down and on 78 minutes, Bernard replaced Anthony Gordon in the Blues third change of the half.

Into the final ten minutes and Rodgers made two more attacking changes, Gray replacing Albrighton and Perez coming on for Tielemans.

Leicester were getting desperate while Everton were fighting hard to defend their advantage, both sides swapping free kicks as the minutes ebbed away, DCL taking a tumble when fouled by Soyuncu. Everton cleared a corner and Leicester had a half-hearted and unsuccessful appeal for a penalty against Seamus Coleman rightly waved away.

A challenge by Evans on Bernard saw both players need treatment in the final minute of the ninety, as six added minutes were indicated – begs the question whether Brendan Rodgers brought them with him !!

Vardy got away on the left to cross low into the area for Perez whose shot deflected wide off Holgate. Leicester were still striving to get forward in numbers, but the Blues midfield and defence were resolute in keeping them at bay with Michael Keane again having had a very good game and helping make it seven points from nine in Project Restart.