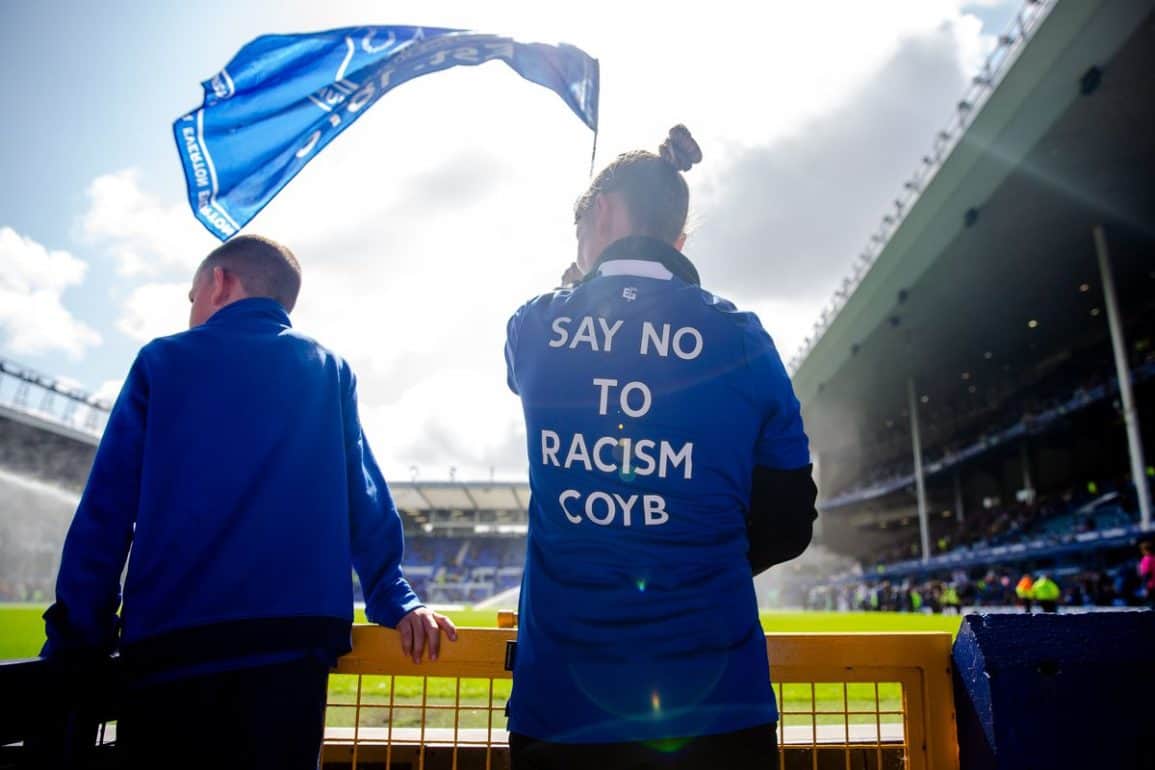 “Everton are white”: Everton, racism, and the era of change

Even with 2020 ravaged by a global pandemic, the perennial disease of racism has managed to rear its ugly head, once again. With the world currently taken aback by the abhorrent murder of George Floyd and the scenes of transnational protests catalysed by his death, I have recently found myself in a deeply pensive state of mind. It has made me reflect on the overt, covert, and clandestine racism which plagues not only America, but many aspects of British/European society, and notably, our beloved sport of football.

Whilst Bulgaria and Montenegro disgraced the international game in 2019, the Italian Serie A asserted itself as the most troubled, major European league. Pertinently, the now Everton striker, Moise Kean, was subjected to a barrage of racist abuse from Cagliari fans.

In September, upon Kean’s arrival on Merseyside, Everton fans unfurled a banner of Kean accompanied with the words: “No al razzismo”, the Italian translation of “No to racism”. I felt proud that, as they so often do, Evertonians had made it their duty to go the extra mile and do the right thing. Heightened by the high-profile incidents in English football, such as the abuse of Chelsea’s Antonio Rudiger (when playing at Spurs), it made me thankful that I did not associate such actions with Everton and Goodison Park. I had Idolised the likes of Yakubu, Saha and Pienaar growing up, and thankfully never heard any such abuse towards these players. Yet, this has not always been the case. Like most clubs, Everton have a chequered past when it comes to race…

As my Dad has keenly reminded me over the years, Everton’s 3-2 victory over Sheffield Wednesday in the 1966 FA Cup, saw the mixed-race Mike Trebilcock score a parity restoring brace, after Everton slipped to a 2 goal deficit before the hour mark. Though Trebilcock’s time on Merseyside was brief, his Cup final heroics and his status as ‘Everton’s first mixed-heritage player’ has seen him to be well remembered. Similarly, with a comparably short stint at the club, Cliff Marshall became the first black player to play for the club, making his first-team debut in 1975. Of Barbadian heritage, the Toxteth-born, Marshall made just eight appearances for his boyhood club, but his brief spell resembled much more. He was not only our first black player, but our first ever black academy graduate.

Though fondly remembered by a certain generation, neither Trebilcock nor Marshall were enough to divert Everton away from its own issues with race. Sadly, in the immediate sense, they were not the breakthrough cases that they symbolise today. Instead, whilst cities such as Nottingham and Manchester began to utilise their football-mad black populations, the city of Liverpool displayed a clear blockage in the system. Regions such as Toxteth suffered from both Everton and Liverpool displaying little interest in seeking out talent from within the black community.

With no black representation going into the 1980s, Everton did little to challenge the intolerant views espoused by a sizeable minority of its fanbase. Consequently, during what can now be seen as English football’s racist ‘peak’, Everton acquired a reputation for being one of the most racist clubs in the country. Whilst Arsenal’s Gus Caesar was subjected to a series of racially charged chants including “shoot that n****r” and monkey noises as he warmed up at Goodison Park, his fellow teammate, Paul Davis, has also remarked on the hostility he remembers from playing at Goodison. However, it was Liverpool’s signing of John Barnes from Watford in 1987, which typified this era of racial hostility. Barnes’ arrival on Merseyside was met with staggering degrees of racism from certain Everton fans. In the derby, bananas were slung from the crowd in Barnes’ direction, as some Everton fans proudly wallowed in the whiteness of their XI: chanting “Everton are white!”. Whilst brilliant on the pitch during the 80s, off it, Everton left much to be desired.

Although the start of the decade was marred by further allegations of racism, with Dion Dublin’s proposed transfer to Everton inexplicably blocked by a board member at the last minute, the 1990s saw an era of positive change. Incremental, but positive, nonetheless.

In 1994, Everton signed their first ever African footballer: Daniel Amokachi. At £3million, the high-flying Nigerian international became the clubs record signing, and the clubs first black player since Cliff Marshall. With Amokachi warmly received on his Goodison Park unveiling and the fans chant of ‘Amo! Amo! Amo!’ which followed in the coming months, Evertonians began to challenge the media’s tag of Everton as a ‘racist club’. To many, this resembled a huge turning point; the whitest team in the largely cosmopolitan and ethnically diverse Premier League, had taken a big step forward towards diversity. Difference in skin colour was becoming subservient to footballing pedigree. Good players, irrespective of their skin colour, were being welcomed and idolised for the first time. A trend which the outpouring of love for Kevin Campbell notably reinforced. On loan from Trabzonspor in 1999, Everton provided Campbell with a getaway from the racism he endured whilst playing in Turkey. He repaid Everton with a prolific spell of goalscoring: steering the club to safety and earning himself the affectionate nickname of ‘Super Kevin Campbell’ from the Goodison faithful. Later, Campbell became Everton’s first ever black captain. An honour which he remains “immensely proud” of and a moment which signified the progress made during the 90s.

Even in spite of the Amokachi ‘turning point’, the increased prevalence of black Everton players and Campbell’s captaincy, the club’s racist stigma proved difficult to shrug off. As recently as 2000, a survey of 33,000 British football fans ranked Everton top in the racist ‘league of shame’. However, from the 70s, 80s and 90s, Everton have certainly come along way. Today, with a diverse playing squad and academy, Romelu Lukaku as the clubs Premier League record goalscorer, a hugely tolerant fanbase, and a club so actively engaged in promoting racial equality throughout the community, the widescale associations of Everton with racism, are a thing of the past.

Yet, with 21 isolated incidents of racism reported at Goodison Park since 2010, and the broader societal issues we see magnified today, there is still a way to go. It is important that we remember our history as a club. All of it, even the ugly facets. For it is these ugly facets which remind us that those days must never be allowed to return.

This article was largely informed by the reading of Emy Enoura’s “Pitch Black: The Story of Black British Footballers.”