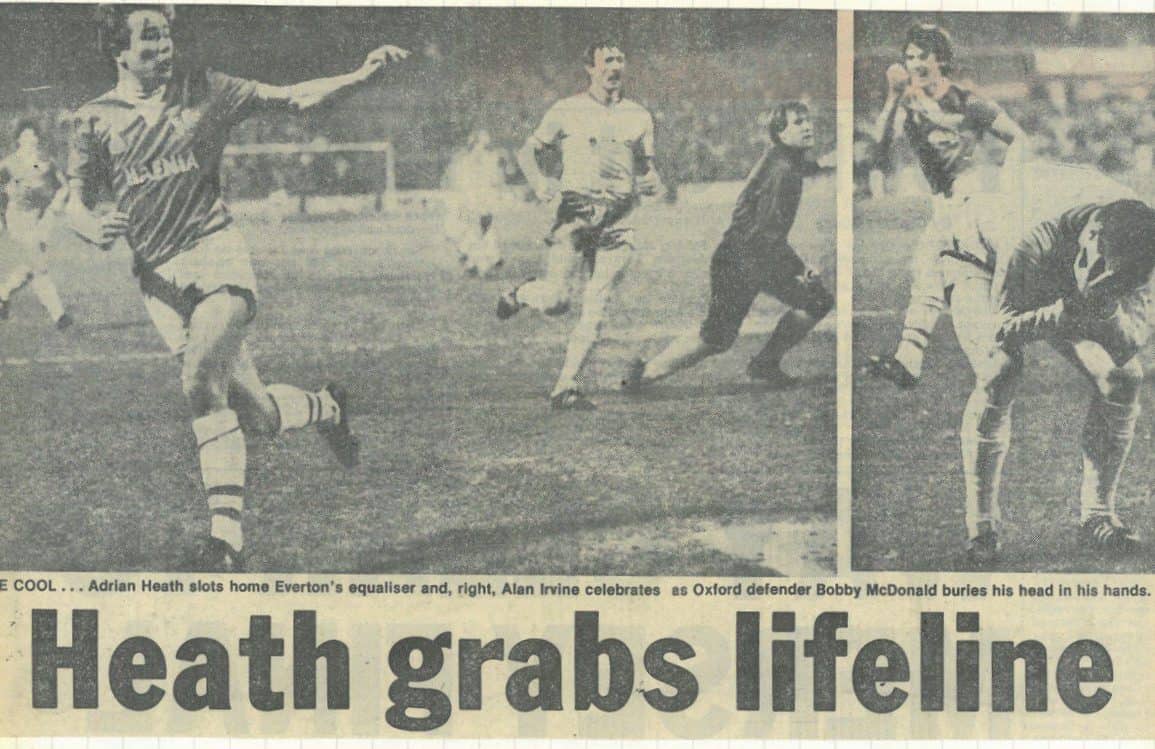 After Gordon Lee’s sacking in May 1981, Howard Kendall had arrived at Goodison charged with reviving the fortunes of the struggling club.

It was hoped that the new boss could arrest Everton’s relative decline and restore some pride.

Kendall had been a player/manager at Blackburn Rovers since 1979 and pulled the Lancashire club out of the Third Division and into the Second. Having narrowly missed out on promotion to the top flight during the following campaign, he had caught the eye of the Goodison board.

But, despite the sense of expectation that always hangs over any Everton manager, there was no urgent pressure for instant success.

‘I don’t think anyone expected us to challenge for the title right away,’ says lifelong Blue, John Black, ‘and if they did then the quality of the players brought into the club would have left no doubt that it was going to be a rebuilding exercise. Personally, I thought we could maybe win the FA or League Cup and if we managed to get into the UEFA then that would be a bonus. But most of all you want to see progress on the pitch, tangible signs of a decent side being built.’

This lack of immediate expectation was probably just as well, because Kendall struggled to get his project off the ground. Despite some positive signs, periods of good form and the acquisition of a few decent players, the fans were underwhelmed. Kendall was only impressing sporadically, and the despondency that had settled over Goodison persisted.

‘There had been hints that Kendall was on to something in his first few seasons, but we’d then started the 83/84 campaign really poorly,’ says Phil Redmond, the co-creator of When Skies Are Grey. ‘I’m not one to get into all that “sack the manager” stuff, but even I joined in with calls for him to go during an away game against Leicester in October when we’d just been shite. He’d had a few seasons and we were getting the sense as fans that he just didn’t have what it would take to get Everton up to where we wanted them to be.’

By the New Year that season, patience seemed to be running out. At a particularly grim home match against Coventry City, just 13,000 had turned up to watch the side struggle their way through a 0–0 draw. Despite the meagre turnout, the shouts of ‘Kendall Out’, which had grown in prevalence during the course of the season, were deafening.

Unlike his two predecessors, Bingham and Lee, Kendall’s arrival had not precipitated a dramatic turnaround and the sense of a club on the rise. Instead, he appeared to have replaced that part with mediocrity and then followed their template by heading towards disaster after a couple of seasons.

Matters looked bleak for the manager. And yet, with hindsight, it was evident that all the ingredients needed to create the greatness of what was to come were already there. Kendall just hadn’t put them together yet. Or had he?

‘A week earlier,’ remembers former Everton captain Kevin Ratcliffe, ‘before we had played Oxford in the League Cup, we’d played Stoke in the FA Cup in a game that I think first began to suggest we were getting our act together.’

Everton went mob-handed to Stoke’s old Victoria Ground. ‘There were about 7,000 Blues at that match,’ says the Blue Union’s, Dave Kelly. ‘Considering how bad Everton had been playing, that’s an amazing figure. Also, when you think about the problems affecting Liverpool back then, the unemployment and the poverty, it’s a testament to the commitment of those fans that they still got behind the club on the road.’

Before kick-off, so the story goes, Howard Kendall enterprisingly turned the travelling army to his advantage. He opened the dressing room windows to allow the fans’ singing to come through and said: ‘That’s your team talk today. Don’t let those fans down.’ Everton won the day 2–0.

‘We played really well,’ thinks former Everton midfielder Kevin Sheedy. ‘It was a side that contained the likes of Reid, Gray, Southall and Sharp and which boasted the recently appointed Colin Harvey as assistant manager. And it was a side that clicked. It was like everything that Howard had been building was coming right.’

But fragility remained. This was still a side mired near the bottom of the table, a side low on confidence, a side packed with inexperienced young players.

‘As good as Stoke had been,’ remembers Dave Kelly, ‘and as important as it was in hindsight, this remained an Everton team that didn’t inspire confidence. If there were signs of promise, it could all still easily fall away. On the way down to the Manor Ground, I doubt anyone was filled with overwhelming confidence.’

Although a Third Division outfit, Oxford United were no pushovers. ‘They had already put out Manchester United, Leeds and Newcastle in the League Cup, and the Manor Ground, with its sloping, winter-worn, bobbly pitch was a tricky place to visit,’ says former left-back, John Bailey.

Stylistically, the first half of the quarter-final revealed the gulf that existed between these two sides. Everton attempted, where possible, to pass the ball around. By contrast, Oxford were more dependent upon long balls and set pieces.

Both approaches yielded chances, with Everton going close through Irvine and Sheedy and Oxford causing the visitors all kinds of problems from corners, specifically via the presence of their statuesque centre-half Gary Briggs. But neither side could land a telling blow, and they went in at half-time level.

After the break, Oxford continued from where they had left off, while Everton appeared to shrink into themselves slightly. The pressure from the home side mounted, and the sense that they would score seemed to build.

And, midway through the second half, Oxford did just that. A free kick near the corner flag was pumped in from the left by Brock. At the far post, Briggs connected and headed the ball down into the six-yard box. There it was met by Bobby McDonald, who toe-poked the ball into the back of the net.

‘They were so full of themselves after that goal, and the crowd so loud, that I thought we might have had it,’ admits Kevin Ratcliffe.

And, for a time, it looked as though Ratcliffe might be right. With not long to go, Oxford appeared to be in control and cruising towards another big scalp in their glorious cup run.

But it wasn’t to be.

With nine minutes left on the clock, Kevin Brock found himself caught in possession outside his own box, chased tenaciously by a terrier-like Peter Reid. As more Everton players swarmed in, Brock looked up and, believing he’d found salvation in his keeper, played a simple pass back. But he’d failed to see Adrian Heath hiding behind one of his own centre-halves. ‘Inchy’ latched on to the ball, took it around the keeper and clipped it into the back of the net.

‘I knew that I was going to get the ball,’ Heath later explained to Simon Hart in Here We Go. ‘But the hardest part was keeping my feet because if you look at it I am falling over virtually as I hit it. It was an important goal for the club but people forget it was a really good finish … it was one of the best finishes I’ve ever done. I don’t think a lot of people appreciated that the bottom end of the field, kicking down the slope, was complete ice because the sun hadn’t got across there in the day.’

It was only Everton’s second chance of the half. But Heath took it with clinical efficiency. All the Blues had to do now was hang on.

As the match came to a close, Everton offered nothing of note except grim resilience, exemplified by the tireless duo of Reid and Richardson, both of whom tried valiantly to harry Oxford to their last breath. The home side, perhaps conscious of an opportunity being squandered, piled forward and came close to earning a deserved victory when Biggins got on the end of a looping cross from Lawrence. But the effort went narrowly wide.

When the final whistle went, every Evertonian there could breathe a sigh of relief. Against a better side, the Blues had earned an undeserved draw and escaped from the jaws of death.

‘There’s nothing like a late goal to win a game or level it in a cup tie,’ says Dave Kelly. ‘You just can’t explain the sense of euphoria. I was one happy man leaving that ground.’

Oxford were dispatched 4–1 in the replay the following week, setting Everton on the path to the League Cup Final. But, perhaps more importantly, that match seemed to act as a catalyst.

‘Even though form had been picking up slightly,’ argues Simon Hart, author of Here We Go, ‘particularly as illustrated in the Stoke game, before that momentous visit to the Manor Ground, Everton were languishing near the bottom of the league and finding wins and goals hard to come by (I recall at that point that we were the lowest-scoring team in the entire league pyramid). Our league season was pretty much over and so the cups offered salvation. If we had gone out against Oxford at their place, who knows how that would have affected confidence.’

After Oxford, the side went on a strong run of form, climbed up the table and also made it to the FA Cup Final.

‘Without Kevin Brock’s mistake,’ laughs Dave Kelly, ‘it’s possible that what came later, the league titles, the European success, the years of glory, might also not have occurred. There’s a reason why so many Evertonians know the name of an Oxford United midfielder. There’s a case for him being our player of the season that year!’