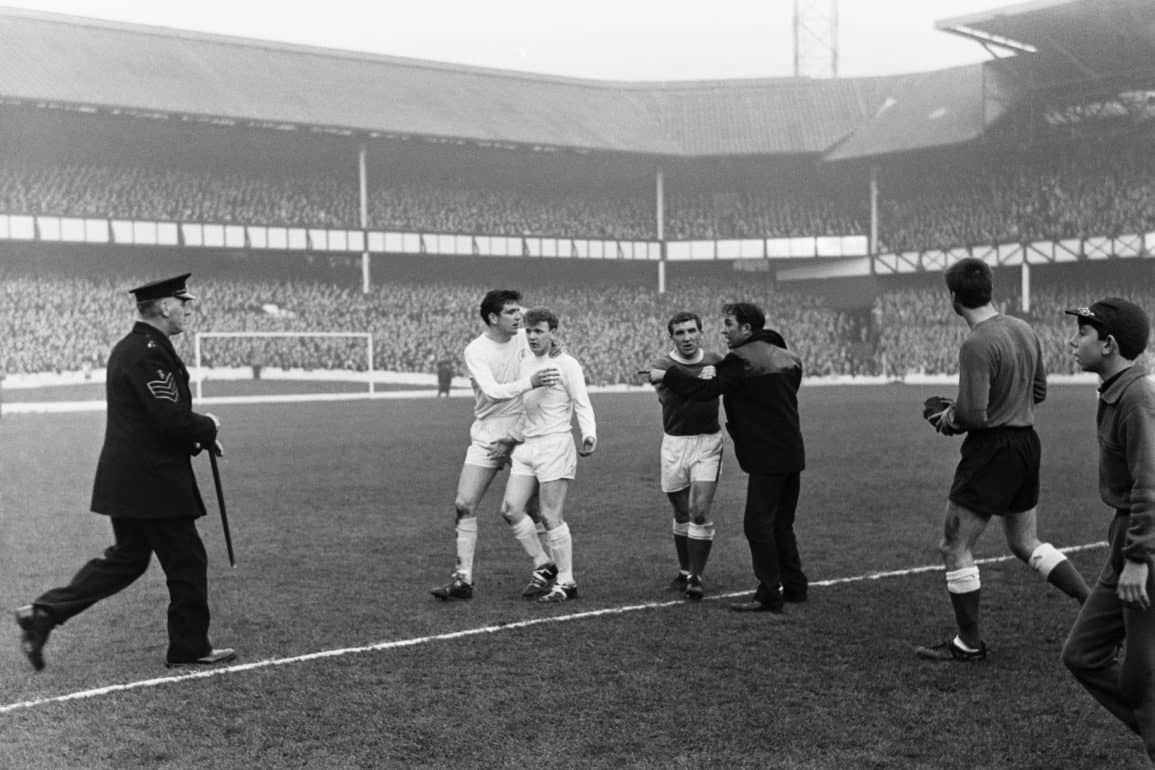 The Battle of Goodison

To many modern fans, reared on a game where crowds are often dispassionate tourists, players overly protected and referees the agents of the authorities’ aims to make football as bloodless as possible, the past must look like a foreign country.

The days of swaying crowds seething with a palpable sense of malign fury, defenders who would soften forwards up with a vicious tackle to ‘let them know they’re there’ and officials who seemed to be more generous in their definition of what constituted ‘contact’ in the term ‘contact sport’ are long gone (at least in the higher reaches of the game).

For all the club’s School of Science aspirations, back when football was a more aggressive affair Everton could give as good as they got. It was an attitude that in the mid-1960s produced a match that is one of the most memorable to have ever taken place at Goodison.

At that time, the opponents that day, Leeds United, were on the rise. Under the management of Don Revie, the Yorkshiremen had just climbed out of the Second Division and were on the way to becoming one of the dominant football forces of the decade. Although undoubtedly blessed with talented players, such as Bobby Collins, Johnny Giles and Billy Bremner, they were also a side that was developing a reputation for aggression.

The FA had labelled Leeds ‘the dirtiest side in the country’, and, in their official journal, pointed to evidence that cited them as having the worst record for players cautioned, censured, fined or suspended in the Football League.

The former Leeds centre-half Jack Charlton provided a revealing insight into the Elland Road mentality in his eponymously titled 1996 autobiography. In a telling account, he related a story in which the young Leeds midfielder Jimmy Lumsden, while receiving physio treatment, had told Charlton and Revie how in a recent reserve match he had gone in over the top of the ball during a challenge, injuring his opponent in the process. According to Charlton, Revie had ‘murmured approvingly’.

Despite United’s refutation that they were a dirty side, there remained a perception that the FA had got it right, and whenever Leeds played there was a sense that opposition teams took to the pitch expecting and preparing for a fight.

This had certainly been the case when Everton had met Leeds in the FA Cup at Elland Road earlier in the year: a bad-tempered and fractious 1–1 draw that had reflected poorly on both teams. Leeds had set the ball rolling with some vicious fouls and then Everton had responded in kind, both sides ratcheting up the aggression as the match progressed.

When the clubs met in the league later in the year, it seemed that memories of that FA Cup clash were fresh in the minds of those both watching and on the pitch.

‘There was certainly a tense atmosphere that day. You felt that it wouldn’t take much to get the crowd riled up.’’ remembers Stan Osborne, one-time Everton apprentice and the author of Making the Grade, a memoir about his time with the club and his life as an Evertonian.

The game had barely begun before the tackles started flying in. Pickering was clattered by Bremner. Seconds later, Charlton suffered a similar fate at the hands of Gabriel. Battle lines had been drawn.

But the ‘Battle of Goodison’, as the game subsequently became known, really burst into flames on the four-minute mark when Giles, notorious amongst opponents for going over the top of the ball, left his stud marks on the chest of Brown, tearing his shirt in the process.

‘I was stood in the Boys’ Pen and watched as Sandy Brown took his revenge, catching Giles with a good left hook that floored him,’ recalls Osborne

Brown received his marching orders, and the Goodison crowd roared in protest. It was a decision that coloured all that followed. The temperature rose as blood boiled. Any Leeds player who ventured too close to the crowd ran the risk of being pelted by coins. Life was particularly tough for the Leeds keeper, Gary Sprake, who was probably pelted with enough spare change to buy himself a few drinks.

When it came to the rough-and-tumble on the pitch, Everton might have being missing their very own ‘hard man’ in Tony Kay, but the Blues still had enough about them to meet Leeds kick-for-kick:

‘We had players such as Jimmy Gabriel, Johnny Morrissey and Dennis Stevens to give the likes of Norman Hunter, Jack Charlton and Billy Bremner a run for their money,’ remembers Kay.

Catterick was the kind of manager who wasn’t afraid to mix it up. The addition of more bite to the squad was one of the things that set him apart from predecessor, Johnny Carey.

‘I remember watching the tackles raining in, and with half an hour gone it was almost a surprise that Brown was the only player sent for an early bath!’ recalls Stan Osborne.

Amongst all the kicking, some football was actually played, and after 15 minutes Leeds capitalised on their numerical advantage to take the lead.

From a free kick far out on the right wing, Collins swung the ball high into the heart of the Everton area. Rushing in at speed, Leeds full-back Willie Bell met the ball perfectly, his header flashing into the net. It was a great finish from a player always willing to supplement the attack.

But, as good a footballer as Bell could be, he also possessed a nasty streak, and, ten minutes before the break, revealed it at its worst when a chest-high tackle on Temple provided the moment that ensured the game would pass into infamy.

The Everton outside-left was knocked unconscious. The crowd seethed in response. Missiles were hurled down on to the pitch, Leeds players were spat at, intermittent fights broke out. Such was the level of hostility, the referee marched both teams off the pitch so that the players and fans could cool down. It was the first time that had ever happened in an English league game.

‘I was stretchered off and was lying in the dressing room,’ recalls Temple, ‘when all the players came in after he’d [the referee] told them to go off. I heard him talking to the two managers, saying “I’m calling the game off. There is going to be a riot out there.” Both managers said there will be a riot out there if you don’t get those players out on that pitch!’

The referee lectured the players during the halt in proceedings, entering each dressing room and telling the teams that if their behaviour didn’t improve they would be reported to the FA.

Outside, for a time, nobody knew whether the game had been suspended or abandoned. Despite the break, according to Horace Yates in the Liverpool Echo, the crowd remained agitated to say the least:

‘Fights were breaking out in the crowd while they waited for the game to resume and this incident was the most sensational I have seen in my years of watching football.’

After five minutes, it was announced on the loudspeakers that play would soon restart, although the fans were warned that the match would be abandoned if more missiles were thrown.

Ten minutes after they had trooped off, the players returned. Temple and Bell (the latter had hurt himself in his disgusting challenge) came back too.

But, despite the referee’s warnings, little changed on the pitch. Some of the tackling, specifically by Hunter and Vernon, remained exceptionally aggressive, and the game seemed to be powered by an undercurrent of venom and animosity.

Hunter was booked, and Bremner, Collins and Vernon warned for dangerous play. Astonishingly, no further players were sent off. Perhaps the referee didn’t want to risk antagonising the crowd any further, so close to the precipice of further violence did those on the terraces appear.

Despite being a man down and unable to play their natural game, Everton refused to submit throughout and were constantly on the hunt for an equaliser. But, although they chucked everything they had at Leeds, Revie’s men hung on grimly to the end.

Throughout the entire game, the kicks and fouls barely relented, ending with 19 transgressions inflicted by Everton and 12 by Leeds.

‘And in response, the hostility that seethed through the crowd continued too. It was so bad that, after the game, there were mounted police outside to disperse us. It was the first time I had ever seen that at Goodison,’ remembers Stan Osborne.

Unsurprisingly, the press reacted negatively to what had happened. This ‘unhappy day for English football’ was labelled by the Sunday papers as ‘vicious’ and ‘spine-chilling’. Blame for what had occurred was apportioned equally, with the players, the fans and the referee castigated for the role they played.

Inevitably, the FA responded. And Evertonians can probably guess what happened. When the FA disciplinary committee met in December, it suspended Sandy Brown for two weeks and fined Everton £250 for the behaviour of their fans. Revie’s men emerged unscathed.

Or did they? ‘The events of that day cemented the reputation of Revie’s United in the minds of many for years to come – that they would stop at nothing to win a game,’ thinks David France, the man behind the Everton Collection.

However, irrespective of their darker side, Revie’s men could play and over the following decade were never out of the top four (an achievement unachievable via brute force alone).

Certainly, John Moores wasn’t put off by the ‘Battle of Goodison’. Years later, prior to Catterick’s removal from the manager’s job, the newspapers were filled with rumours that Revie had been offered a record-breaking annual salary plus a massive signing-on bonus in an attempt to lure him to Goodison.

The deal never came off. Revie opted to turn down Everton’s offer and stay at Leeds, citing ‘personal reasons’ for his decision. For a time, though, the move had been on. There was a moment, however brief, when the School of Science was close to metamorphosing into the School of Hard Knocks.