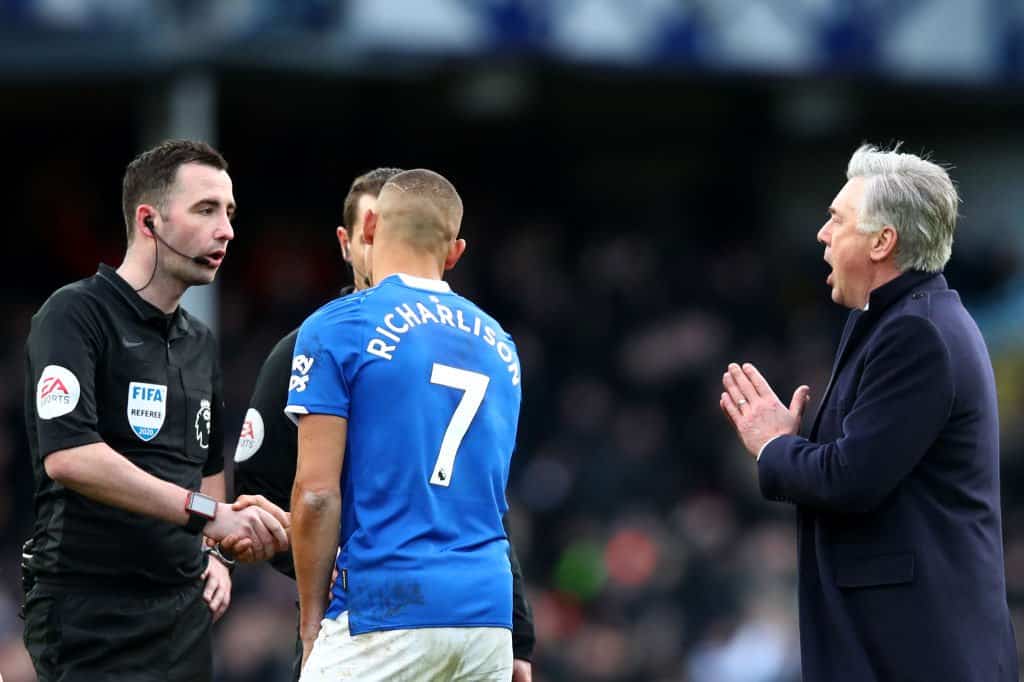 A pulsating game of football, loaded with incident and no shortage of quality from both sides ended in controversy as VAR denied Everton an added-on time winner as DCL netted in front of the Gwladys Street.

Two of the most storied clubs in British football clashed on Sunday at one of the games truly iconic grounds as Everton hosted Manchester United at Goodison Park in an archetypal north-west derby.

Carlo Ancelotti was hoping to see his side bounce back from only their second Premier League loss since he took of Everton, and keep hopes of European football next season alive, a point he made clear in his Friday press conference saying, “the fight for Europe is still open and it will be open after the game against United. A win against United will be important for our confidence.” He continued by stressing the importance of playing at home, “Manchester United is a strong team in a good moment but, our house is important. The support of our fans gives us more confidence, we can play with more focus here and it is true that to play at home is an advantage.”

Turning to player matters, The Don confirmed that Theo Walcott has recovered from a knee problem, Andre Gomes was in line to start in midfield where Morgan Schneiderlin is unavailable having had knee surgery, and that the calf injury suffered by Lucas Digne would be assessed ahead of kick-off.

Asked about press reports of Manchester City eyeing a summer transfer move for Mason Holgate, our Italian maestro dismissed such thoughts saying, “I think it is a rumour. Even if it is not a rumour, I can say Mason Holgate is an important part of the future of Everton and there is no possibility he can go to another club. Zero possibility.”

United arrived at Goodison in good heart and sitting five points ahead of the Blues and having progressed to the last 16 of the Europa League with a thumping win over Bruges last Thursday.

A buoyant after recent resultsOle Gunnar Solskjaer, referring to the way his United side last season were crushed by Everton, commented, “I can with hand on heart 100% say these boys will never give in and never give up like that team did. These are the boys we want to build the next team around.”

With Marcus Rashford already ruled out through injury, the Norwegian also had a doubt over striker Anthony Martial who suffered a muscle strain in training this week. Spanish goalie David de Gea was expected to return having been rested for the Europa League match and impressive youngster Mason Greenwood was looking for an immediate recall to the team.

In charge of proceedings was referee Chris Kavanagh.

A blistering start to an incident filled first half saw stiff, slightly late challenges by Shaw on Coleman and Wan-Bissaka on Richarlison in the first sixty seconds, before Everton scored in the third minute as Dominic Calvert-Lewin charged down a de Gea clearance into the Park End goal.

And DCL was unlucky not to score a second a minute later as a long ball from Keane saw the centre forwards shot tipped away for a corner by de Gea. United responded with Shaw playing Fred in on the left and his cut back was met by Matic, his shot coming back off the crossbar. Davies found Sigurdsson and his ball put Richarlison into space but he was held up as he tried to feed Walcott. Fernandes found Shaw and his ball inside for Martial saw a weak shot go wide… and all this in the opening ten minutes.

Matic saw a low shot parried by Pickford and only half cleared as Coleman conceded a corner blocking a cross from Shaw. Martial then crossed for Fred to head over as United began to get the paper hand and it needed some excellent work from Gomes to rob Greenwood and then race away from Wan-Bissaka before seeing his shot deflected away.

Coleman went down on 26 minutes holding his right hamstring and he was duly replaced by Djibril Sidibe. Matic found Martial and his deflected shot went just over the bar for a corner.

United drew level just past the half hour mark as a poor ball from Sidibe wasn’t collected by Walcott and Fernandes wasted no time in striking a hard low shot past Pickford from 25 yards.

Fred caught Richarlison on his right knee and the Brazilian needed treatment before going down again from the restart. Tempers flared five minutes before the break as Richarlison was clattered again and DCL went in hard on Shaw with Tom Davies also piling into the tackle. Shaw and DCL were both booked and three minutes later, Davies joined them on a yellow for a scything challenge on Matic. The booking tally was evened up just before the break as Maguire was penalised for a clear pull on DCL.

The final attack of the first half saw Gomes and Baines combine, the latter cross saw a glancing header from Richarlison go wide of the far post.

No changes by either side saw the Blues attacking the Gwladys Street for the second half.

On 55 minutes, Sigurdsson sent DCL away and Lindelof became the fifth booking bring him down just outside the penalty area. The free kick saw Sigurdsson beat the wall but his shot hit the post with Richarlison unable to put away the rebound.

Just past the hour mark, Theo Walcott was replaced by Bernard as Everton sought to add more pace and guile to their right flank. A good interception by Davies saw him release DCL who took his time before forcing de Gea into kicking a low shot away from a corner. Everton kept the pressure on a cross from Baines led to Fred being booked for hand ball 22 yards out, dead centre. The free kick from Sigurdsson hitting the wall and easily cleared.

United made a double change on 72 minutes, Ighalo and Mata replacing Greenwood and McTominay respectively.

Fernandes got away down the United left and his cross intended for Martial was excellently defended by Baines at the expense of a corner that was easily cleared. The next Blues raid saw Sidibe fall heavily into the advertising wall trying to get to a ball from Keane.

Into the final ten minutes and the game still very much there to be won, and Carlo Ancelotti made his final change, withdrawing Andre Gomes to bring on Moise Kean.

Davies was brought down by Fred just wide of the penalty area, the free kick cleared only as far as Sidibe whose long range shot was deflected for another Everton corner. Maguire appeared to be climbing on DCL but the referee penalised Sigurdsson for his challenge on Fred.

Richarlison did well to get away from two defenders but Lindelof got back to concede another corner that again saw the referee favour the visitors with a free kick. Davies did well to find Sidibe and another corner was won off the clearing head of Maguire. United cleared and quickly got down the other end with Sigurdsson conceding a corner and they made their final change, Williams replacing Martial.

Everton didn’t completely clear the danger and it took a last gasp block to deny Ighalo from three yards. Three added minutes were signalled – was there enough time for the Blues to snatch a winner ?

Bernard weaved some magic to find Richarlison in the area and his ball into the path of Sigurdsson saw the Icelander go down, but DCL was alert and quick to gather the loose ball and fire the ball past de Gea only for VAR to rule it out for offside.

Richarlison won another late corner as Goodison voiced its displeasure at the denial of the ‘goal’ and the spoils were shared. Everton manager Carlo Ancelotti was quickly onto the pitch to voice his concerns with the referee who was loudly booed as he left the pitch ahead of most of the players from both sides.