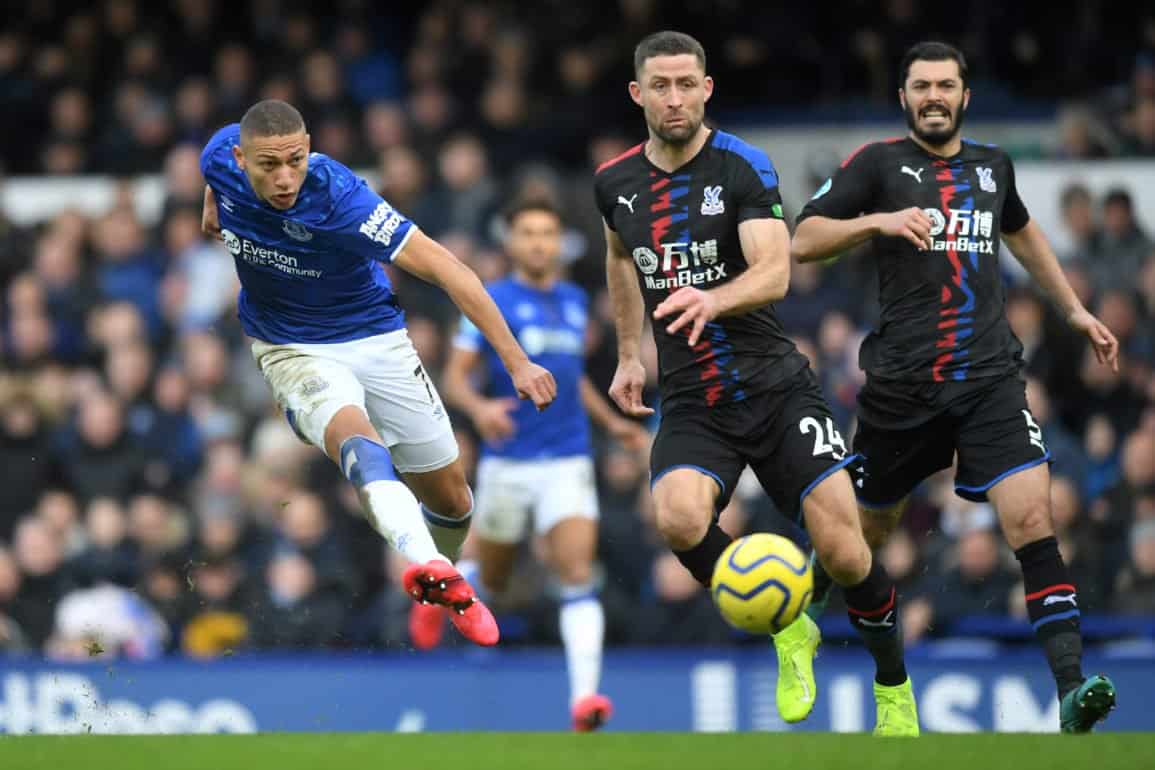 Blues continue on their winning ways to Europe (?)

Everton’s Brazilian duo of Bernard and Richarlison saw them continue our recent run of good results, but this was far from a polished performance of samba-style footie from the boys in Blue, before DCL popped up with the late insurance goal.

After the thrilling come-from-behind and last gasp victory at Watford, our mighty Blues returned to Goodison to face Roy Hodgsons’ Palace but, now with refreshed and definite hopes of Europa League qualification.

And the manager alluded to this in his Friday press gathering when he noted, “Honestly, we are not thinking about the Champions League. Playing in the Europa League would be a fantastic result for us next season – this is the target.”

Asked about the progress on Andre Gomes and J-P Gbamin, the Don advised, “with Gomes we are going to organise a friendly game, everything is okay with him. The plan for Gbamin is, the surgery went well and now he is doing individual treatment looking toward a return in about eight weeks time, hopefully before the end of the season.”

He also cast doubts on the decision for the summer transfer window to stay open till September 1st saying, “It’s not good to have this window so open, the best way for a manager is when the season starts officially, the window closes.”

With midfielder Fabian Delph unavailable due to suspension following his two yellow cards at Watford, there was at least one certain change to the starting line-up named by Carlo Ancelotti: Pickford, Coleman (c), Keane, Mina, Digne, Walcott, Schneiderlin, Sigurdsson, Bernard, Richarlison and Calvert-Lewin.

Palace arrived at Goodison in poor form having not won in the Premier League since a Boxing Day victory over West Ham, and without a clean sheet in their last nine league games.

Palace’s veteran manager Roy Hodgson has been stalling on committing himself further to the South London outfit, as he wants reassurances on transfer funds being available in the summer transfer window. His side have stumbled of late, being winless in their last seven games and having slipped to 14th in the Premier League table has them nervously looking down at the relegation scrap.

In his pre-match press conference, he spoke positively of his players training this week since the nature of their loss to Sheffield United. “They’ve been good, there’s nothing like getting back to training and getting a smile back in people’s faces.” On the goalkeeping error by Vincente Guaita he noted, “He’s been very good, goalkeepers are unfortunately in that position where everyone can see an error. We are not concerned because he’s done so many good things.”

For this lunchtime kick off in bright sunshine, our referee was David Coote.

A quiet opening to the game saw an early free kick from Lucas Digne beat the Palace wall and Guaita parry it to safety and James McCarthy, on his return to Goodison, yellow carded on nine minutes for a foul on Digne. At the other end, Palace won a corner and that led to a snapshot from can Aanholt that Pickford blocked at the foot of the post and Everton dealt better with the second corner kick.

The Blues opened the scoring on 18 minutes as from a throw in, Schneiderlin found Sigurdsson and his ball forward played Walcott into space for a cross that was just too high for DCL but which fell perfectly for Bernard to half volley home from eight yards.

Shortly afterwards, Walcott went down with a left leg issue and despite playing on after some treatment, he went down again and limped off. A cross from the right from Coleman reached Bernard and his ball lifted inside for DCL was just too far ahead of his attempted diving header.

In what was an even, but rather nondescript half of football, neither side were finding any real rhythm or stamping their authority on proceedings. On 43 minutes, a long ball forward from Cahill saw Pickford out quickly to deny Zaha but he didn’t hold the ball and it was hastily cleared.

Richarlison showed his frustration as a pull on him by McCarthy went unpunished and in the three added minutes, a cross from Zaha saw Benteke lay the ball into the path of van Aanholt but his shot was high and wide of the target.

Get involved in the match discussion and vote for your Everton MOTM in our forum.

Everton attacked the Park End in the second half with neither manager having made any changes during the half time interval.

An early scare for the Blues as McCarthy found Zaha and his miskick end effort deceived Mina and Pickford needed to be brave to punch clear before the ball reached Benteke.

The warning though wasn’t heeded and on 51 minutes, Palace were level as nobody challenged for a Pickford clearance, the ball was played quickly to Zaha and he found Benteke who controlled before beating Pickford for the equaliser.

Palace were boosted and the Blues looked rattled as a corner from van Aanholt got past both Richarlison and Coleman to hit the near post before being scrambled behind for another set piece that was cleared.

Goodison was voicing its frustration as Palace looked to be gaining the upper hand before a ball out of defence was neatly flicked on by DCL for Richarlison. The Brazilian set off from just inside the Palace half reaching the edge of the box before jinxing inside and firing past Guaita and inside the far post for 2-1 on 59 minutes.

Scott Dann came on Tomkinds on the hour mark ahead of Jordan Pickford making a superb save to deny a point blank header from Benteke off a cross from McArthur.

Palace somehow survived an Everton attack that saw Sigurdsson battle his way through their rearguard, Guaita with a vital touch, and on 65 minutes, Everton sent on Tom Davies for Bernard to stiffen up the midfield.

Max Meyer replaced James McCarthy on 68 minutes before a poor ball from Coleman caused alarm in the Everton defence leading to a cross from Milivojevic that was too strong for Zaha to get on the end of.

Into the final quarter hour and it was still nip ‘n tuck with Palace far from subdued and they made their final change sending Kouyate on for Ward on 79 minutes. Good work by Richarlison saw him dispossess Ayew and find Sidibe before being denied a corner.

Determination saw Coleman recover to win the ball back from Zaha and clear before Mason Holgate replaced Gylfi Sigurdsson with five minutes of normal time remaining.

And the Blues wrapped up the three points as a corner from the left saw Richarlison’s fine header come back off the crossbar for DCL to head home the easy rebound.

DCL then spurned a chance of his second and a fourth for the Blues as Guaita could only parry a shot from Tom Davies and he ballooned his chance over the bar.