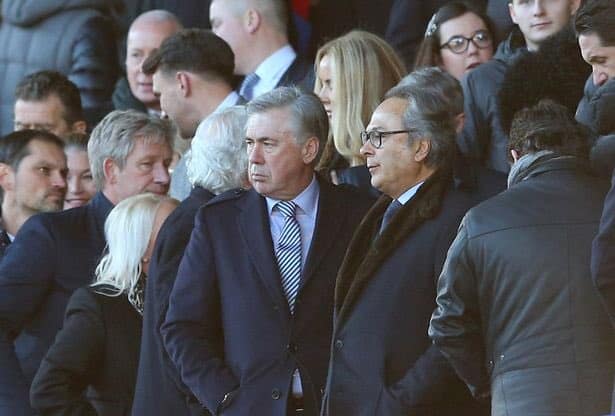 Speaking to Jim White on talkSPORT, Farhad Moshiri said: “I’ve been here for some time. We’ve had managers from Wigan, Southampton, Watford – they’ve always had their impact but we’ve invested heavily into a group of players – they’re all internationals so we think they would benefit from someone with pedigree. It has nothing to do with Hollywood, really. I’ve had my most enjoyable time with Duncan and we’re really grateful to him, this is the club and I think we just need to keep this. That’s the most valuable aspect of Everton, not Hollywood. You know, this passion, celebration of fans and the manager together and Carlo [Ancelotti] is a real football man, we hope with Duncan [Ferguson] next to him we keep the passion and we build on it”.

On being asked on the significance of the appointment after Koeman, Allardyce and Silva, Moshiri said: “Look, Everton is a very, very difficult job in football because you’re two home losses from being disowned by fans.

“I think it’s very hard, so what we’ve noticed for young managers is it’s difficult to cope because you have the bad runs but I think the fans didn’t give you any time and strengths of Goodison is the passion of the fans and once you lose that, you lose a lot and so I think particularly Silva was a very talented coach, I think and you know when gods of football are not kind to you, what do you do? You lose 6 points through VAR. Everything goes wrong, he loses 70% of his midfield but I think a good general is a lucky one, that’s the thing. We hope we’ve got a lucky general now”.

When asked if he is hopeful Carlo Ancelotti is the man to win Everton a trophy, Moshiri said “I think we have a good base. We’ve been unlucky, Duncan has given the passion and the belief but we have still got some very difficult games. We play Burnley at home but then Man City away and Liverpool away in the FA Cup. All these games take a lot out of players but I think, you know they’ve got the belief back and 4 days rest will do them the world of good. We’re hopeful”

On whether Moshiri is enjoying his time at Everton, and whether he truly understood what it was going to be getting involved in taking over the club Moshiri said: “Well, it was supposed to be 5% of my time, not 95%. I think it’s just a very, very, one of the most difficult clubs. We dont have the financial base but the fans expectation is huge. I think this miss-match somehow needs to be resolved. We’ve put a lot of money in to give the club a platform to match fans expectation and sometimes, it’s just too much for a young manager that’s why we hope an experience manager can cope and deal with it better.”