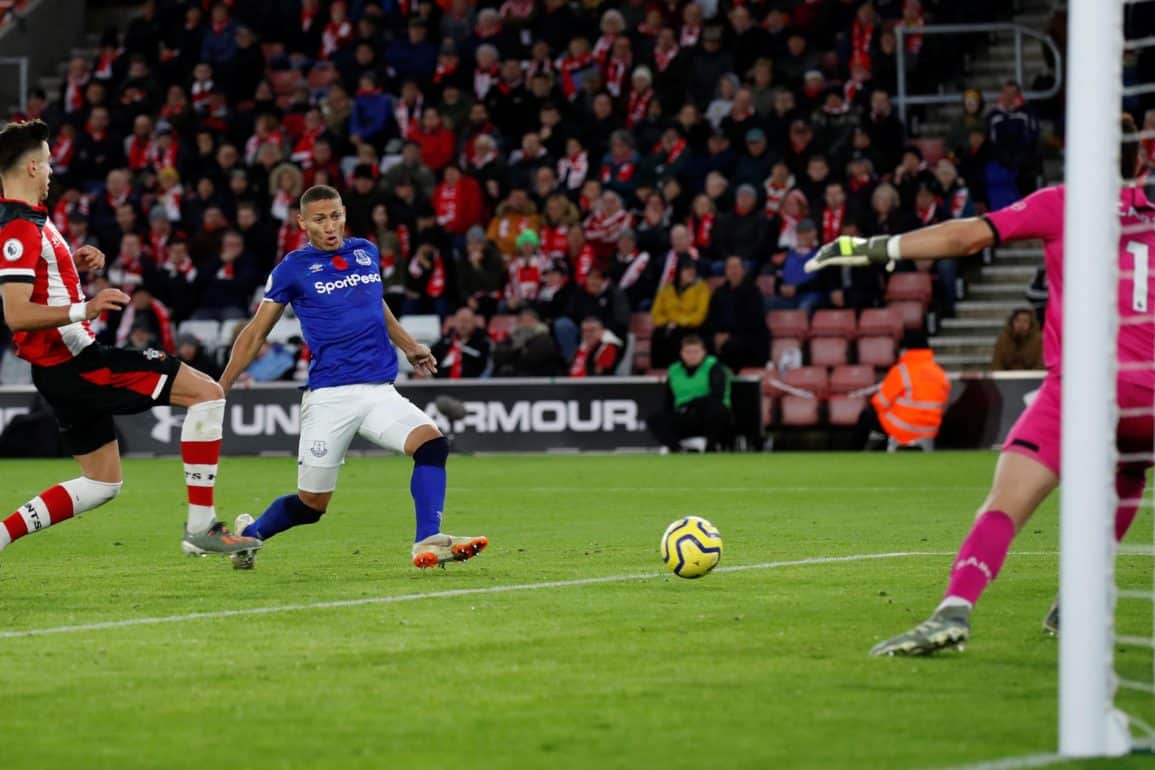 Davies and Richarlison earn Blues first away win of the season

Everton registered their first win away from Goodison this season with goals from Tom Davies and the mercurial Richarlison, the latter earning the win after Saints had levelled. Everton had controlled the first half, but a set piece let the home side back in before the Brazilian sent the travelling fans in raptures with a consummate winner.

Following the last-gasp draw with Spurs in a game that rightly infuriated thousands of Evertonians thanks to the inept performance of Martin Atkinson and the entirely unfit-for-purpose VAR system, the Blues and Marco Silva travelled south for yet another game being labelled as a ‘must win.’

Saints boss Ralph Hasenhuttl and his team salvaged some pride with decent showings albeit losses against Manchester City following their last home game that saw Leicester spank them 0-9 at St.Marys. But the Hampshire outfit are in dire straits having picked up just one point at home this season from a draw with Manchester United.

The Austrian was under no illusion as to the size of the task ahead when he faced the press saying, “This is a six-point game. Every game is important but this is, for sure, an important game for them too. We’ve played against [most of] the top eight clubs so far. Now we’re playing fixtures against the bottom teams. We don’t have to ask too much [of the fans], we have to deliver. We have to show up and show a reaction at home and give them the feeling that we’re doing everything to win this game.”

With defender Ryan Bertrand suspended, Hasenhuttl was hoping Cedric Soares would be fit to return after a calf injury while winger Moussa Djenepo was in line for just his second game for the Saints.

A troubled week for Marco Silva and Everton following the injury to influential midfielder Andre Gomes that could see him out of action till next season, although Silva hinted he might be back before the end of this season. Heading to the south coast, the loss of Gomes wasn’t the only injury concern in midfield for the under pressure Blues boss as Fabian Delph limped out of the Spurs game with a hamstring strain.

Silva drew criticism from some Blues fans for his somewhat less than 100% supportive comments on Richarlison following the Spurs game that saw the Brazilian down almost as much as he was on his feet. Many Evertonians were dismayed when Silva commented on Richarlison, “Even if it looks in many, many moments that it is not fair on him with the decisions, what I am saying to him and our staff as well is for him to keep standing as much as he can and in the right moments the referee will be fair with him, because we feel that it is a little bit not so fair. Keep standing and be strong because the contact in the Premier League is really strong as well. And, for sure, look after the football and the decisions will be fair with you.”

Also in his pre-departure press gathering, Silva referred to the lamentable VAR decisions against Everton, at Brighton and last weekend when he added, “I have full support for our fans and how they feel at this moment. They feel like us because the last three or four games, it was really difficult for us to understand and to see so many different things in the same games, and different decisions for us and the opponents.”

On a cool afternoon, our (hopefully sensible) referee was Paul Tierney.

Inside thirty seconds Richarlison was down, thanks to foul by Armstrong, the free kick coming to nothing before Richarlison returned the compliment with a foul on Armstrong.

Everton put some pressure on the Saints and eventually won a corner on the right that Sigurdsson swung over and the near post flick-on from Mason Holgate was converted at the back post by Tom Davies with a free header on four minutes, the perfect start for the Blues and the travelling support.

Boosted by the early strike the Blues looked to get forward quickly again with Richarlison, Sigurdsson and Davies involved, the final ball to Sidibe though was just too strong.

Sidibe was back in his natural defenders role minutes later to deny Redmond as he tried to get into the Everton penalty area, the French fullback easily steering the ball to safety and the Blues breaking away to win another corner this time from the left. Digne sent to the back post while Richarlison appeared to he held in the box, no penalty appeals and Saints cleared easily.

It had been a decent start from the Blues, having grabbed the opening goal they were coping well with sporadic raids from the home side, while looking to break themselves in search of a second.

Sidibe with a good challenge found Walcott who threaded a fine ball through for Tosun to get on the end of but his close range shot lacked the power to overly trouble McCarthy, but it was a promising move.

Everton with a chance for a second as Tosun flicked a ball from Sigurdsson on to Walcott whose first time return ball was lofted to the head of Tosun, but he couldn’t direct his header on target but again, the signs were promising.

A free kick after Walcott was fouled taking a quick pass from Sigurdsson saw the Icelanders set piece sail through the Saints six-yard are with Davies again at the back post but unable to head the ball back from a tight angle.

The home crowd grew inpatient midway through the half as Everton were comfortable in possession, passing the ball at will and snapping into the tackle when the home side did win the ball back.

Walcott, taking a ball from Sigurdsson, tried a speculative long range effort against his former club, but it was too far off target to trouble McCarthy in the Saints goal.

Half an hour gone and the Blues were looking comfortable on the ball and restricting Southampton to very little in terms of meaningful possession, Jordan Pickford had been largely a spectator.

More Everton pressure started by Davies and relayed through Sigurdsson saw a shot from Sidibe blocked and a Tosun effort on the turn was also blocked and cleared.

Following a free kick from Digne on the left, good work from Holgate on the right saw his cross into the box where Mina and Richarlison got in each others way, a Tosun effort blocked and eventually Saints clearing.

The pace eased off a little in the final minutes of the half, and that led to two missed tackles from Holgate and then Mina to give Southampton a late opportunity, but Tom Davies was quick to get back and make the challenge to deny Redmond any chance of a shot.

A solid 45 minutes from the Blues ended with Sidibe fouled by Djenepo and as the teams retired to the dressing rooms for the interval, the only major question was given the amount of possession and chances, how they hadn’t managed a more comfortable lead.

Saints with a half time change withdrew Soares in favour of the more attack-minded and wearing goalie gloves against the cold (?) Sofiane Boufal.

Saints with a quick start saw them earn a free kick for a foul by Sidibe on Djenepo, Pickford easily saving a shot from Boufal from just outside the area.

Boufal had certainly given the home side some impetus and a strong run saw Everton happy to concede a corner from the right that Mina cleared only for Djenepo to win another on the left that Everton didn’t clear sufficiently and when it was turned back into the area by Boufal, former RS Ings was in the six yard area to poke home the equaliser, barely five minutes into the second half

A good break from midfield by Richarlison saw him pushed wider than he’d have liked but the ball wasn’t cleared and came back to Sigurdsson whose curling effort was tipped over by McCarthy.

Tempers flared when Schneiderlin appeared to catch Djenepo with an accidental high boot, Marco Silva on the touchline raging at the decision to penalise Schneiderlin and earning himself a ticking off from the referee.

Holgate spread the ball wide right for Walcott and he fed Tosun in the area for a shot that beat McCarthy, but rolled agonisingly wide of the far post.

An hour gone and the game was evenly poised, Everton still enjoying more of the ball but, Southampton much better than they’d been in the first half.

A long throw-in from Digne earned the Blues another corner on the left that saw his outswinger find the head of Tosun, but his header on target lacked the direction and power to beat McCarthy.

Mina was a little fortunate to get away with an awkward challenge in the area on Djenepo. Ings spread the ball wide to Djenepo who got away from Sidibe who brought him down on the left hand edge of the area, a yellow card being shown for the offence. Ward-Prowse took it, firing it to the near post where Pickford was happy to turn it around the post for a corner to Saints that Mina cleared.

Understandably given their respective league positions, both teams were desperate to try and find a go-ahead goal and the Blues needed to be alert to clear two quick Saints corners.

A decent break by Walcott diwn the right saw him check and feed the ball inside to Sigurdsson in a perfect shooting position but he went for the through ball for Tosun that was poorly played. Richarlison then worked himself some space on the left but his cross to the back post was poor and it sailed behind for a goal kick.

Into the final twenty minutes and the Blues looked to make a double substitution, warming up DCL and Alex Iwobi for a 74th minute change, replacing Cenk Tosun and Theo Walcott respectively.

And it paid instant dividends as within a minute, Djibril Sidibe made space for a cross from the right and Richarlison, unmarked at the back post, had the simplest of tasks to put the Blues back in front.

And the Blues were unlucky not to add a third as a free kick from Digne found Iwobi unmarked and his shot was deflected into the post with McCarthy rooted.

Into the final ten minutes, Saints withdrew Redmond for Adams and Everton were pushing for a third as they worked the ball to Iwobi and he slid a ball in for DCL whose shot was deflected away.

Richarlison went down following a challenge by Armstrong, the Brazilian clutching his left leg and receiving treatment much to the annoyance of the home crowd who were starting to drift towards the exits.

Boufal saw yellow for a pull on Iwobi and Everton made their final change, Michael Keane coming on for the closing minutes replacing Richarlison.

Tom Davies seemed to get a stray arm in the face as we hit 90 minutes and Saints in desperation sent Obafemi on for Armstrong.

Four minutes of added-on time were signalled and the Blues successfully dealt with a Ward-Prowse free kick following a foul on Boufal by Keane.

Silva was again vociferous on the touchline claiming an infringement on Tom Davies as the seconds ticked down on the Blues first win away from Goodison Park this season, and bring some relief not only to Marco Silva, but the thousands who had again travelled to support the Blues