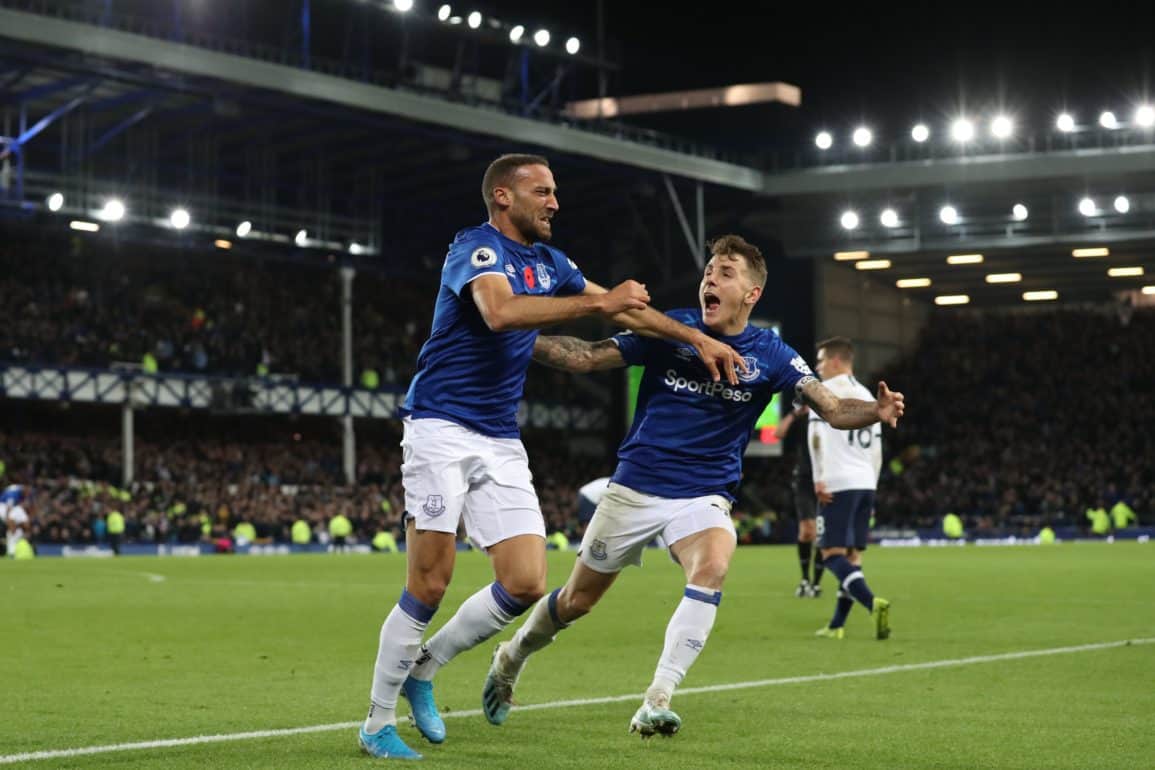 Andre Gomes suffered what appeared a broken leg and son rightly saw red for a shocking tackle as Everton claimed an added-on time equaliser from Cenk Tosun in a game riddled with contentious refereeing from Martin Atkinson and VAR interruptions.

Sunday afternoon football at the Grand Old Lady saw Spurs the visitors and with both sides struggling for any real consistency of form, and both managers feeling a degree of pressure to improve their respective fortunes, it made for an interesting prospect.

Marco Silva got what some called a stay of execution with the midweek victory over Watford in the Carabao Cup, but it was league points the Portuguese needed most having steered the Blues to just three league wins the far.

On the injury front he was hoping Yerry Mina would be fit to play having been a first half withdrawal against Watford, and with Bernard out possibly till the New Year, would he give Moise Kean another start?

In his pre-match press briefing Silva showed his frustration as his sides inconsistency saying, “We have not achieved the results we want this season and taken what we deserve. The last game (Brighton) is clear of that but, football is about results. We need to change it as you can’t have two faces – one when you play at home and a completely different one away.”

Our visitors Spurs too have been in indifferent form and haven’t won away in the league since January. With left back Danny Rose suspended, Erik Lamela definitely ruled out with a thigh strain and defender Jan Vertonghen doubtful with a hamstring problem, manager Mauricio Pochettino also had selection issues to resolve.

In his media gathering before heading north he commented, “We need to be positive, feeling that positivity makes us believe we can beat any team. At the moment we struggle a little bit with our confidence. Th most Morgantown thing is how are we going to finish, it’s not nice to see you in the middle of the table, but this is the reality we need to accept.”

On a cool, damp afternoon under the floodlights, our referee was Martin Atkinson.

With this being Evertons’ home game closest to Remembrance Sunday, before kick-off, a lone bugler sounded a poignant and immaculately played and observed Last Post as a mark of respect for those who made the ultimate sacrifice in two World Wars and other military campaigns.

The opening exchanges saw clear attacking intent from both sides looking to play through the midfield with, ironically, the best half chance coming on a long clearance from Pickford that just too strong for Walcott to get on the end of.

Richarlison and Walcott worked well to dispossess Sanchez but the final ball from Walcott was poor and the chance went begging.

The opening quarter hour had at least been competitive, both sides seemingly well matched.

Spurs won the games first corner and Pickford was called on to tip away a cross from the right by Aurier. Sidibe then found Gomes for a fine through ball to be played for Richarlison whose shot was blocked by Alderweireld.

Digne with a vital interception prevented Son from getting on the end of a ball from Eriksen.a good move then from Everton involving Walcott and Sidibe saw a cross from the right by Walcott just too high for Gomes who couldn’t direct his header down.

On the half hour, the home crowd were incensed as referee Atkinson yellow carded Theo Walcott after what appeared a perfectly good tackle on Davies.
Eriksen quickly equal led up the bookings after a clear pull on Richarlison.

Everton put together a good move that ended with Digne finding Richarlison in the Spurs area but his shot on the turn lacked the power and direction to overly trouble the Spurs goalie.

Everton won a corner through Digne that was easily cleared before Gomes got hurt getting forward and with Richarlison clearly pushed, referee Atkinson again bemused the home crowd by awarding Spurs the free kick.

Everton saw a second corner come to nothing and the last meaningful move of an even first half saw Digne thread a ball through to Iwobi and he found Richarlison who twisted away from Alderweireld but his rising shot cleared the crossbar.

First action of note in the second half saw a deft ball from Alli find Son who went down in the area under pressure from Mina. VAR reviewed the incident and decided no penalty, but referee Atkinson declined to book Son for a dive.

Richarlison in heavily on Moura gave Spurs a free kick that Eriksen sent right across the Everton six yard area with nobody on the end of it from either side.

Gomes sent Richarlison away down the right channel and into the Spurs area where he went down under a challenge from Sissoko, but the referee waved away half hearted penalty appeals.

A good move started by Holgate to Iwobi and on to Digne saw his pull back cross reach Richarlison and his shot on the turn was well saved by Gazzaniga.

On 62 minutes, Spurs opened the scoring as a poor giveaway by Iwobi was pounced on by Son and he fed Alli who took his time before firing low past Pickford on his right side.

Ndombele was booked a a heavy challenge on Sidibe ahead of Walcott winning a corner when his shot on the end of a good break was deflected wide. Walcott was then replaced by Cenk Tosun.

On 70 minutes, VAR took what seemed an age to review a possible Blues penalty before referee Atkinson signalled play on.

On 79 minutes, an awful challenge by Son on Andre Gomes saw Everton players absolutely raging, Son saw a red card, but worse for Everton was the immediate distress Gomes was in with what looked like a broken leg.

A cross from the right by Sigurdsson found DCL at the back post but he couldn’t direct his header on target.

Forth replaced Aurier on 87 minutes as Spurs blatantly wasted time, much to the infuriation of the home crowd.

With twelve added minutes signalled, Everton had time to snatch something from the game and they did in some style as a ball from Mina saw Digne with an instant volleyed cross and a bullet header at the near post from Cenk Tosun, Goodison erupted.

VAR reared its ugly head again with a potential red card decision turned down as Everton strove for a late, late winner.

A fouls by Celso on Delph gave Everton a free kick on the left while Spurs wasted more time replacing Eriksen with Sessegnon.

Fabian Delph pulled up just before the final whistle clutching his right hamstring, as the Blues claimed a valuable point from a game riddled with contentious refereeing decisions.