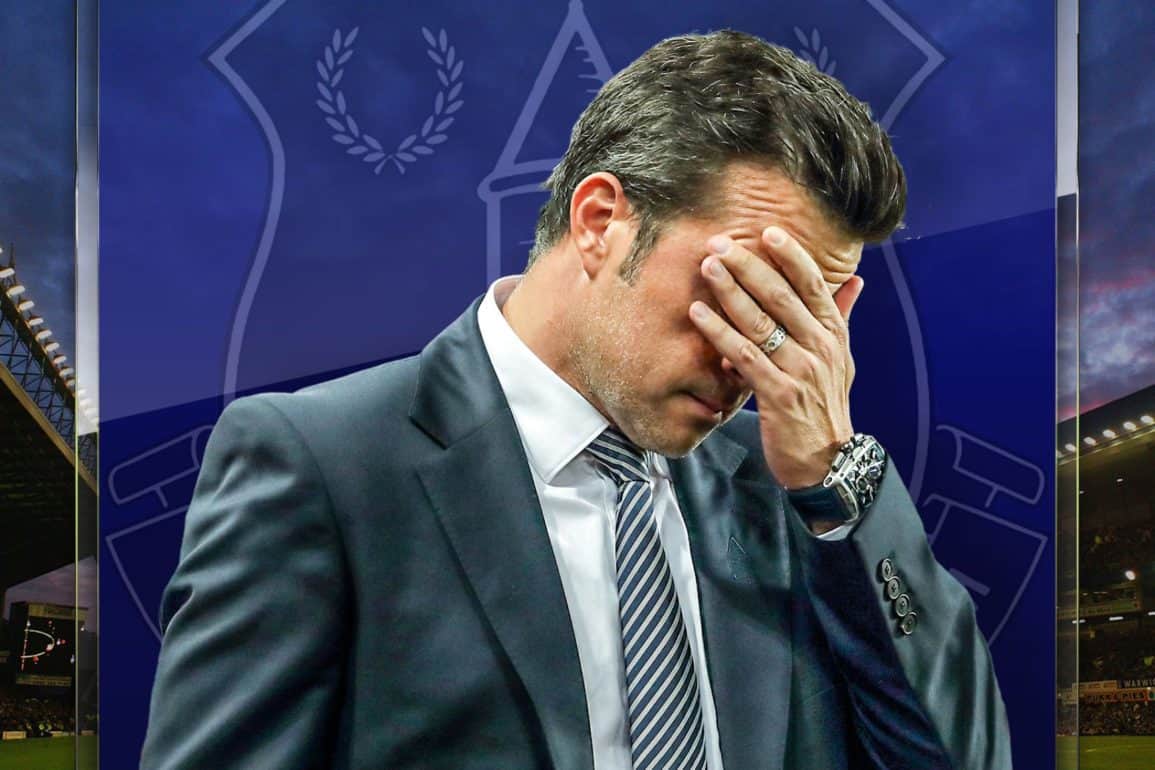 Everton were denied at least a share of the points as a late own goal off Lucas Digne saw them go down to defeat, but it was a highly controversial and contentious penalty awarded by VAR that will be the major talking point.

Boosted by their best performance of the season last weekend in humbling West Ham, Everton made the long trek to East Sussex to take on an Albion side lying just one point and one place below them in the table.

Graham Potters’ side were without baldy-headed Aussie midfielder Aaron Mooy following his red card last weekend in a narrow 2-1 loss away at Aston Villa. With long-term injuries to Bernardo and Izquierdo still ongoing, Potter had no other fitness concerns as he looked to maintain the Seagulls decent record over Everton that hasn’t seen the Toffees win there since 1983.

Speaking to the media, Potter noted, “Last weekend was disappointing but it’s not been a case of picking the group up. We haven’t got time to feel sorry for ourselves and we’ve been looking at how we can improve, that’s the way it always is. It’ll be another big challenge this weekend against a team who have really good quality.”

For the Blues, Marco Silva was understandably more relaxed than in previous weeks having watch his side dismantle West Ham in their best showing of the season to date. The only downside to that impressive win was a late knee injury sustained by Yerry Mina, meaning Mason Holgate was lined up as his direct replacement alongside Michael Kean at the heart of the defence.

Seamus Coleman, having served his one match suspension, was available for selection as were defensive midfielders Fabian Delph and Morgan Schneiderlin as Everton looked to record their first victory away from Goodison Park this season. Blues fans though were hoping Silva would stick with the side and set-up that so impressed last weekend.

Before departing USM Finch Farm for the long journey south, Silva remarked on last weeks game saying, “We performed so well, we showed that quality, that pride in ourselves to play the level we played. It was a turning point for us. It does not mean we will win all the matches from now until the end of the season of course, but we have to play in that way, always to win, always with that pride in ourselves.”

With options available, Silva eventually decided on just the one change to the side that dismissed West Ham so comprehensively: Pickford, Sidibe, Keane, Holgate, Digne (c), Davies, Gomes, Walcott, Iwobi, Bernard and Richarlison.

On a breezy and rather damp afternoon at the Amex Stadium, our referee was Andy Madley.

A steady opening to the game as the rain fell with both sides feeling their way into the game, trying to gain some early superiority, an offside flag stopping Albion in their tracks as Proepper tried to send Connolly into the Everton area.

A few minutes later, the same result at the other end saw Walcott flagged offside as Sidibe tried to get him in behind the Albion defence before another long ball play by the home side saw Mautay get a shot away to no effect.

A foul by Andre Gomes on Connolly gave Albion a free kick on the left edge of the Everton area and Gross curled a powerful shot through the wall and into far corner beyond the reach of Jordan Pickford to his right hand side on the quarter hour mark.

Albion were boosted by the early marker and another free kick after a foul by Sidibe on Mautay saw another free kick sent in that Pickford gathered and immediately released downfield for Bernard to win a corner. And at long last, Everton made a set piece pay as Lucas Digne sent in the corner and Richarlison beat two defenders to rise like a stag in the mating season at the near post to bury a downward header for 1-1 on 20 minutes. There was a slight deflection off the shoulder of Webster that VAR took a look at, so no doubt the Brazilian will be denied his fourth marker of the season.

Everton were a little unlucky moments later not to take the lead as a quick raid saw Walcott take a pass from Richarlison and shoot from the right side of the Brighton area but his effort was too close to the goalie who gathered comfortably.

Bernard went down hurt off the ball, signalling immediately that he was in pain and Marco Silva was furious that Brighton didn’t stop their move, swapping heated opinions with his opposite number Graham Potter. After some treatment Bernard limped off to be substituted, Gylfi Sigurdsson coming on just before the half hour mark.

Stephens was the first player to see a yellow card ahead of another long ball aimed for Connolly as Albion opted for a route one approach on a wet pitch that offered a turning nightmare for defenders to deal with.

The game was lacking quality probably due to the conditions which were not easy for either side to contend with and a shot from Sigurdsson didn’t really test Ryan in the home goal.

Everton looked for a penalty as Richarlison attacked at pace after a great turn in midfield, but his pass inside for Walcott saw his shot hit Dunk, the referee ignoring half-hearted claims for a spot kick as the ball fell nicely for Iwobi who worked the opening to shoot and bring a save from Ryan.

Everton had recovered well from falling behind and were having slightly the better of the play without truly dominating, another offside flag denying Richarlison as he tried to get on the end of a through ball.

Another Blues corner again saw Digne take and interplay with Sigurdsson saw the ball eventually come out to Iwobi who curled a decent effort just wide of the target. Digne was then back into his defensive role to deny Mautay with a fine block as Albion looked for go-ahead goal.

Pickford was alert and good enough to hold onto a shot from Alzate on the end of a cross from Mautay. Four added minutes were signalled following the injury to Bernard and the VAR review, and a poor header from Webster on a long ball from Pickford almost fell nicely for Walcott who appeared to be pushed over was the only half chance of the extra minutes.

Albion with a bright start as Alzate got forward but fired his shot over the bar without overly troubling Pickford.

Digne and Iwobi combined to rob Proepper with the French fullback momentarily staying down having been fouled. Digne swung the free kick to the back post looking for Davies and Burn did well to turn it away for a Blues corner. Burn did well again to block Richarlison and concede another corner.

The home side were looking to counter attack and Mautay found Connolly who tried a trick that didn’t deceive Pickford. The Blues broke and won another corner that was swung in and cleared only as far as Iwobi who struck a powerful effort straight at Matt Ryan in the home goal.

Digne getting forward again caused some panic as he found Walcott and his close range shot was deflected up and easily gathered by Ryan, but the Blues had started the second period well.

Brighton got away with a clear shirt pull by Montoya on Richarlison, neither the referee or Lee Mason on VAR duty seemed to see it.

Davies was working hard in midfield breaking up Brighton moves and looking to find Gomes to set the Blues going forward. Albion were quite happy to resort to long ball attacks as the antidote to Davies shutting them down.

An hour gone and the game was still there to be won, Everton the more cultured but Brighton were far from out of it. And just to prove the point, they thought they’d stolen the lead as Gross flicked the ball beyond Pickford, but the linesman had clearly spotted both Gross and another Albion player offside.

Gross and Montoya were replaced in a double substitution by Graham Potter, Trossard and Schelotto the players introduced on 65 minutes. The home side were again adjudged offside as Webster looked to play in Mautay.

Two tough tackles on Theo Walcott saw Marco Silva again in serious conversation with the fourth official ahead of Pickford choosing to punch out a cross rather than risk a catch in the wet and windy conditions. A double change by the Blues for the final 18 minutes, Fabian Delph and Dominic Calvert-Lewin coming on for Alex Iwobi and Theo Walcott.

And the change paid dividends as a lovely reverse pass from Mason Holgate found Calvert-Lewin and with his first touch he fired the Blues into a 1-2 lead with a fine left footed shot beyond Matt Ryan.

VAR was again employed as another long ball saw Connolly go down under a challenge from Michael Keane, referee Madley not even bothering to look at the pitchside screen before the penalty was awarded by baldy-headed Lee Mason sat in Stockley Park.

What is this VAR nonsense about, the referee didn’t see it live and didn’t even bother to check it himself ??

Mautay converted the penalty sending Pickford the wrong way and Everton were justifiably incensed at the way the decision was awarded.

Pickford had to be solid to hold onto a skidding shot from Alzate, and when Gomes slipped, Alzate tried to find Trossard with another ball over the top.

Mason Holgate picked up a late yellow card for a foul on Mautay 30 yards out that saw Pickford punch the shot from Dunk only as far as Trossard who fluffed his chance on the rebound.

Albion were now looking the more likely with Glenn Murray now into the action and as the 90 minutes expired, six more were signalled. Everton broke forward and Burn made a good tackle to stop Richarlison from getting in on goal.

A foul by Proepper on Tom Davies saw him yellow carded and Digne sent in a free kick that Brighton cleared to halfway where another free kick went the Blues way.

Heartbreak for Everton deep into added-on time as the home side stole the points with a quick break that saw Trossard fire the ball into the area and Lucas Digne was desperately unlucky to deflect the ball past Jordan Pickford.

It was too late for the Blues to recover again, and there will undoubtedly be some very angry and frustrated Everton staff on the long bus ride back to Merseyside but, they will need to pick themselves up for Tuesday nights Carabao Cup game against Watford.