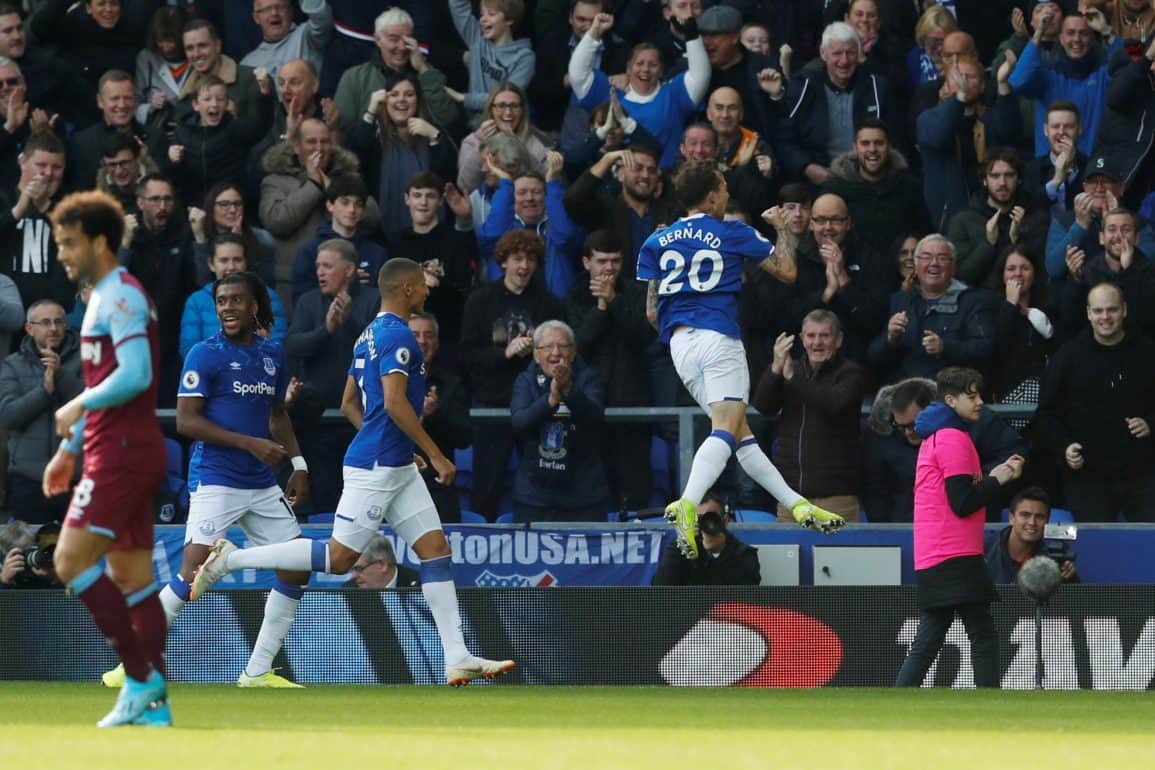 A much changed side and game formation saw Everton blow West Ham away with two extraordinary goals from Bernard and Gylfi Sigurdsson and the best display of the season by a country mile.

Another international break having slipped into the annals of history, Everton returned to Premier League action with as close to a must-win game as you could have so early in the season, even manager Marco Silva conceded that to be the case.

Four straight defeats had plunged the Blues into the bottom three and pre-season hopes of a top six challenge had all but evaporated.

Pressure had been building on manager Marco Silva with many feeling that the result from this game, Brighton away and the Watford game in the Carabao Cup could well determine the length of or even early curtailment of his time at the club.

And the news that summer signing Jean-Philippe Gbamin has undergone surgery on a thigh injury and would be out until the New Year was hardly the news Silva had been longing to hear. Coupled with the loss of Seamus Coleman following his red card at Burnley and fitness concerns over Fabian Delph, at least one change to the team to face West Ham was assured.

In his pre-match press conference Silva put on a brave face saying, “Their [West Ham’s] away form is really good, we know what we expect. It’s up to us to perform better than the last games to achieve a good result. It will be a game for us to express ourselves on the pitch. We are together in this situation. One month ago, before the first international break, we were in sixth position and in a good moment. I am the first one to take responsibility but it is good to see the players take it as well.”

With many of the Goodison faithful and plenty of the football media imploring Silva to move away from the 4-2-3-1 formation that has clearly failed to deliver, the Portuguese named five changes to his starting eleven: Pickford, Sidibe, Keane, Mina, Digne (c), Gomes, Davies, Walcott, Iwobi, Bernard and Richarlison.

In the opposite dugout was the veteran Chilean manager Manuel Pellegrini, and with West Ham having had a decent start to the season, the visitors arrived for this early kickoff in good heart and ready to pile more pressure onto the blue side of Merseyside.

He was hoping to call upon Declan Rice, Aaron Cresswell and Robert Snodgrass all to feature while goalie Lucasz Fabianski, Michail Antonio and Winston Reid remained his major doubts for selection.

In his press briefing, Pellegrini appeared much the more confident when he commented, “I think that we are where we deserve to be. I am very pleased with the style of football. We scored a beautiful goal against Crystal Palace, we are making chances and trying to score, we play the most amount of time in the opposite half, we have more shots on target. The fans deserve to have our style of football and we will not change that whether we are winning or losing.”

On a bright, autumnal afternoon, our referee was Paul Tierney.

West Ham had the first opportunity with a free kick 25 years out that Lanzini bent wide, but it was just about their only attempt in a first half utterly dominated by Everton.

Playing almost a 4-2-4 formation the Blues set about the visitors forcing four early corners, the third of which saw the ball headed on at the near post for Tom Davies to hit the back post from two yards.

Anderson with a good turn got away from Davies but a fine tackle from the much maligned Michael Keane won the ball back.

Everton took a thoroughly deserved 17th minute lead as a quick ball sent Walcott into space and he played in Bernard on the right fit the little Brazilian to twist one way then the other, bamboozling the defender before sliding the ball past Jimenez from a very tight angle.

Everton were playing really well, at pace, positively and confidently winning two more quick corners and pinning West Ham in their own half.

It should have been two nil when Davies fed Iwobi -having a fine game – and he found Richarlison whose shot on the turn beat Jimenez but crashed to safety off the post.

Everton were totally on top and another fine move saw Walcott shoot low from 25 yards for Jimenez to gather.

A long delay saw Masuaku receive treatment for a knock in the face ahead of a rare Hammers attack, Noble lofting a long ball for Fornals to head with Pickford gathering easily.

In what was arguably the Blues best 45 minutes of the season so far, Gomes then fed Richarlison who had Sidibe in space on the right, but he delayed, shot and it was deflected up in the air got Walcott to try a speculative overhead kick.

The only disappointing thing of a very good first half was Davies picking up a yellow card for kicking the ball away at a West Ham free kick.

Excellent football played at pace and dare I suggest much more belief in the formation saw the Blues deservedly ahead at the break.

Not surprisingly, no changes by Marco Silva during the interval but Manuel Pellegrini replaces the ineffective Anderson with Yarmolenko for the second half.

Everton had the hall in the net inside 90 seconds of the restart, Richarlison thumping home a volley only for the offside flag to rule it out.

Noble found Yarmolenko is space on the right and his cross was missed by Mina with Fornals screwing his shot wide of the far post from twelve yards out.

Richarlison went down in the Hammers box twice to no avail, referee Tierney waving half hearted appeals for penalties away.

Jimenez saved well from a Mina header off a right wing corner as the Blues enjoyed the better of a slightly more competitive second half.

A poor clearance from a goal kick by Pickford saw Rice head forward for Fornals to try a long range volley that cleared the crossbar.

An Everton free kick 25 yards out saw Digne beat the wall and go just wide of the near post.

Iwobi with a great through ball for Walcott who lost his footing but Everton kept the pressure on with Mina involved to win a corner from the left that Jimenez dived full length to his left to deny Mina.

On 62 minutes, Jack Wilshere replaces Fornals ahead of Digne swinging in a free kick that was headed clear only to Walcott who hit a tremendous volley that crashed off the crossbar with Jimenez nowhere near it.

A foul by Gomes gave West Ham a free kick 22 yards out, Pickford easily saving the shot from Yarmolenko.

Into the final twenty minutes of a pulsating game and Rice was booked for a foul on Walcott as he looked to break in over the halfway line.

Ajeti replaces Noble on 73 minutes ahead of a great ball from Sidibe for Iwobi to be fouled by the legs of Jimenez.

Diop saw yellow for a crude tackle on Richarlison ahead of a fortunate corner for West Ham bringing a fine save out of Pickford off Lanzini (?).

Moise Kean replaces Theo Walcott on 85 minutes with Walcott getting a deserved standing ovation for a fine effort.

Gylfi Sigurdsson then came on for Alex Iwobi who also got a thoroughly deserved standing ovation, and the Icelanders first involvement was seeing a shot from the edge of the area kicked away by Jimenez after a Digne cross had been headed not clear enough.

Andre Gomes saw yellow for a poor challenge on Haller ahead of four added minutes being signalled.

Mina with a vital clearance as Rice tried to find Ajeti saw Everton race down to the Gwladys Street End and Gylfi Sigurdsson secure the points with a stunning curling shot into the top corner.

This was more like a real Everton performance, full of pace, commitment, ideas and most of all belief in an attacking formation that completely overran the visitors.

Difficult to pick one Man of the Match as every player contributed – marvellous to watch.