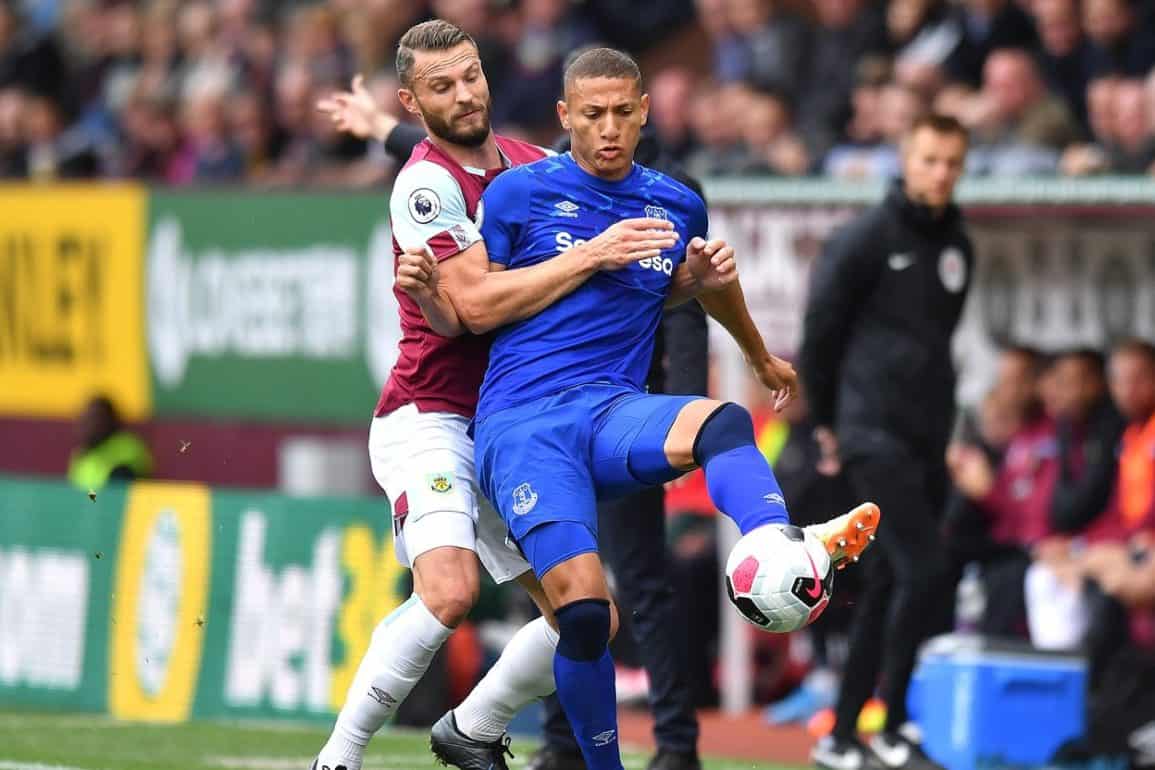 Seamus Coleman was dismissed for two poorly judged challenges as Everton again failed to produce any real goal threat in a game they really needed to win to relieve Marc Silva from mounting pressure on his tenure as manager.

Everton made the short coach ride to East Lancashire very much in need of both a performance and three points to arrest a run of three straight Premier League losses. For the tenants of Turf Moor, victory over the stuttering Blues would see them climb into the top half of table and sink Everton into further trouble.

Burnley manager is close to celebrating seven seasons in charge at Turf Moor and was no doubt aware that Everton hadn’t lost four Premier League games on the bounce in almost five years. For this clash of famous old Lancashire clubs, Dyche was reluctant to risk either Danny Drinkwater or Jack Cork.

Dyche is a man used to pressure and he was obviously aware of the weight of expectation upon Marco Silva when he commented, “The Premier League is difficult, we all know that. Whether they’re inconsistent or not, they’ve still good players, good individuals. We’ve all spoken about it as managers at varying times. The demands of the game are forever higher, the demands within clubs are forever higher, it’s just the way it is. I’m sure he’s [Marco Silva] working diligently to try and help his side to perform like all managers do.”

Everton arrived at Turf Moor with Jean-Philippe Gbamin making progress but still unavailable but, with Andre Gomes recovered from his rib problem and Theo Walcott having overcome his first minute exit against Manchester City last weekend.

In something of a telepathic show of unity with his opposite number, in his pre-match press conference Marco Silva noted, “Sean Dyche is doing a good job. They don’t change things season after season. This is a specific type of game. Really physical team, it’ll be tough. It’s tough for everyone to play there. They always want to challenge. They have two strong strikers, you have to switch on from the first minute.”

The managerial bonhomie over and done with, Marco Silva knew nothing but a victory and a first away from Goodison this season, would be acceptable to the travelling fans who again sold out our allocation of tickets. And with growing doubts about his faith in a 4-2-3-1 formation, news of his team selection was eagerly awaited. And he duly elected a starting eleven of: Pickford, Coleman (c), Keane, Mina, Digne, Schneiderlin, Delph, Richarlison, Sigurdsson, Iwobi and Calvert-Lewin.

On a cool afternoon, our referee was Graham Scott.

Digne won an early left wing corner via Gudmundsson that saw the ball cleared to Iwobi on the right who tried to find Mina for the header but Burnley were able to clear the early danger.

A free kick on the right taken by Sigurdsson saw Pope party the ball away for a second Everton corner that Burnley cleared and tried to get a quick counter attack launched with Alex Iwobi getting back quickly to prevent anything developing.

It had been a bright opening by the Blues, enjoying more of the possession and Burnley restricted to a speculative effort from Pieters from a tight angle that cleared the crossbar.

A decent left wing break by McNeil saw Keane easily block his cross for a throw-in that saw Pieters send a long cross for Gudmundsson to head goalwards, easily gathered by Jordan Pickford.

A quick ball out from Pickford to Sigurdsson was relayed wide t Richarlison and when he found Iwobi for the shot, it hit a defender and was deflected wide for another corner, that was easily dealt with by Burnley.

Iwobi linking well with Delph worked the ball out to Coleman and another attempted cross was deflected away for a corner that saw Mina jump with Tarkowski, the Burnley defender coming off worst and needing some treatment for a knock.

Reaching the midway point of the half, Burnley wasted a free kick earned from a needless foul by Schneiderlin, and then failed to make the most of another free kick when Michael Keane climbed all over Barnes.

A corner swung to the back post saw Pickford alert to kick away a close range effort from Hendrick as Burnley began to exert more pressure and it needed a good interception by Iwobi to relieve the pressure after Mina had denied Barnes a chance on goal.

A decent move involving Iwobi and Schneiderlin saw Richarlison look to find DCL at the back post with Tarkowski clearing at the expense of another Everton corner, that Burnley McNeil cleared off his line only for Coleman to look for Digne and win another. Once again and disappointingly, the set piece came to nothing and Burnley looked to break quickly with a long ball over the top for Barnes that Mina directed back to Pickford.

With five minutes remaining before the break, Seamus Coleman rampaging down the right took a pass from Sigurdsson, jinked inside a defender and found Iwobi but his shot on the turn was blocked by Lowton and cleared – best chance of the half !!

Coleman on another raid slightly over ran the ball and picked up a yellow card for his contact with Pieters that saw the former Stoke player hurt. Coleman to his credit was quick to acknowledge the foul and clearly concerned that Pieters would be okay to carry on.

Into two minutes of added-on time and other than a speculative long ball for Barnes that saw Pickford quick off his line to clear, the teams headed to the dressing room with the scoreboard idle.

One word to describe the half – scrappy.

Neither manager made any changes for the second half that saw the Blues attacking the end where the travelling support was encamped. And with there not having been a scoreless draw between these two clubs at Turf Moor in over seventy years, the emphasis was on both sides to try and produce something of note in the second 45 minutes.

Everton again began brightly, Iwobi seemingly the most likely to force an opening with Mee happy to clear for a throw-in. DCL then played in Sigurdsson, but the Icelander was unable to make anything of it and look somewhat forlorn as he picked himself up.

A good passing move worked the ball to Richarlison for a shot that Pope gathered safely, but the opening minutes had been slightly more encouraging for the visitors.

Pieters went down again needing treatment, the challenge by Coleman in the first half clearly hampering him and rightly so, he was substituted by Taylor on 54 minutes.

Another poorly judged challenge by Coleman, this time on McNeil saw him pick up a second yellow and the red for his troubles and the Blues were down to ten men for over half an hour. Neither fouls were anything like malicious, just the result of poor timing.

From the free kick, Tarkowski beat Mina to a header to find Barnes who lifted his shot over the bar as Everton prepared to bring on Sidibe at the expense of Gylfi Sigurdsson.

Hendrick picked up a yellow card for a rather innocuous pull on Alex Iwobi, but again a poor set piece from the free kick saw possession lost far too cheaply.

Into the final twenty minutes and Taylor stretched his legs to get away from DCL and win a corner off Djibril Sidibe and almost inevitably, zonal marking let Everton down as Tarkowski caused problems that allowed Hendrick to get in at the back post and volley home the opening goal.

Rodriguez replaced Barnes and Moise Kean immediately replaced Calvert-Lewin and Everton got forward with Pope punching a deflected Delph shot for a corner. And it’s getting boring reporting that the set piece was wasted as Pope gathered the ball when it was eventually crossed.

Burnley broke quickly and it needed a foul from Delph on the edge of the Everton penalty area to halt them, with the free kick forcing a corner that saw Pickford impeded.

With the home fans chanting ‘you’re getting sacked in the morning’ in the direction of Marco Silva, the Blues manager needed something quickly to shut them up.

Rodriguez and Taylor combined in another quick Burnley raid, Pickford saving well from Rodriguez who had made an immediate impact. And he again linked well, this time with Gudmundsson, but Digne defended well to win a goal kick.

Andre Gomes came on for the ubiquitous ‘cameo’ role with seven minutes remaining, replacing Morgan Schneiderlin, in the last throw of the dice by Marco Silva.

Aaron Lennon then came on for Gudmundsson to a warm round of applause from both sets of fans.

It was all going wrong for Silva and Everton as Sidibe clattered into Taylor prompting referee Scott to brandish the yellow card again.

The final minutes of normal time saw Burnley happy to absorb weak Everton pressure and break meaningfully themselves looking for a second. Six added minutes were signalled and Everton got forward into the Burnley box, but the lack of composure and quality saw the ball cleared.

Burnley were happy to play out time and condemn Everton to a fourth successive defeat and all the signs are that Marco Silva is massively struggling to keep his head above water as a lack of goals and results, a lack or creativity from midfield, zonal marking and a worsening disciplinary record make for very bleak reading.

Post script… around this time two years ago, Everton slipped into the bottom three and Ronald Koeman was dispensed with. As we finished the day in 17th, even though we’re only eight games into the season, is it now deja-vu time with the club looking towards another change ?