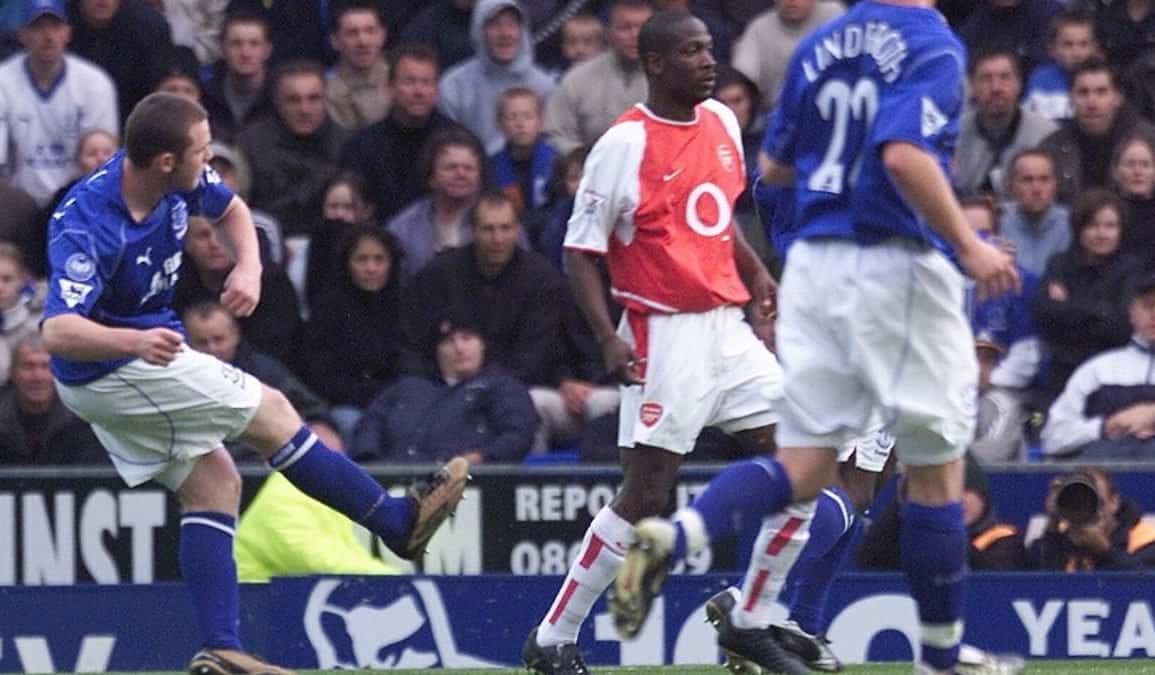 60 games that shook Goodison… I started this list a while back – it was a labour of love – but now I realise that with the move to Bramley-Moore Dock we might only have three seasons of Goodison left.

Not even 60 league games.

And if I post one of these for every one of home games, we’ll have moved before I finish the list…

Here’s my first, about an unlikely victory against a bulletproof Arsenal…

“He’s the biggest English talent I’ve seen since I arrived in England. We were beaten by a special goal from a very special talent.” – Arsenal Manager Arsene Wenger

Arsenal seem to have a special relationship with Everton. When Alan Ball left he moved to Highbury. Dixie scored his 60th against them, Arsenal won the title in 1998 by beating us 4-0, and this year what could be Arsene Wenger’s last game as manager could be against us on the last day of the season…

…And of course Wayne Rooney bagged his first against a seemingly invincible Arsenal.

The 16 year old came on with only the embers of the match remaining. He was already furious because David Moyes hadn’t played him from the start. It didn’t take him long to turn the game; sending a long range shot that looped over Seaman’s head like a vandal’s brick.

After the goal the young Scouser was bouncing around like a videogame character somehow transplanted into a world of professional footballers. His feet doing what legions of teenagers could only dream of doing with their XBox thumbs.

What most don’t remember is that Rooney came close to scoring a second goal that day.  To loop the ball over Seaman’s head once was impressive; to do it twice, and see the ball stray just a pixel too high was amazing. It was bold AUDACITY with the caps lock on.

I was sat there in the Park End, in what – looking back – felt like a Royal box seat for Rooney’s coming-of-age. And I wasn’t exactly sure what I was witnessing.

Was Wayne going to be another false dawn like Danny Cadamarteri? The dreadlocked 17-year-old had come into the world of football feet first and hit the ground running, like a precocious young chess champ intent on playing a pickup game with the Grand Masters. But he didn’t make it at Goodison. Would Rooney?

Of course, it neither began nor ended with that goal. The Rooney phenomenon was already something of an open secret amongst those in-the-know at Goodison, and he went on to score other great goals for Everton, performing an impossibly sharp u-turn at Elland Road whilst leaving Lucas Radebe for dead, as well as a great return goal at Arsenal’s place. Against Bolton he didn’t score, but dominated proceedings to such an extent that stories from that game still bounce around…

The rest of this blue fairy tale remains unwritten; Wayne didn’t go on to drag us into a golden age, instead he left for Old Trafford. Yes, he returned, but it was too late. When we look back on his career, Everton will just be bookends. A starter and an after dinner mint.

Rooney is surely the greatest talent to come through Everton’s youth team, but he isn’t an Everton legend though. Not when Mark Pembridge has played more times for our great club. Not when he won nothing with us.

He left too early and came home too late.

Everton were of course compensated with millions for letting him go, but the Wayne I knew, the bullish street-fighter with the world at his feet?

I wouldn’t have swapped him for a wilderness of millions.