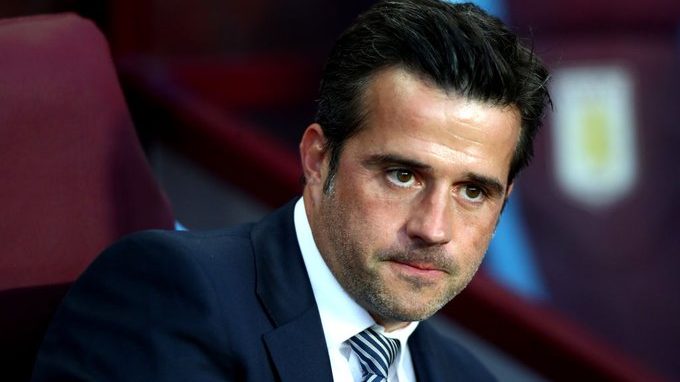 Everton paid the price for their continuing lack of a cutting edge up front as they missed the chance to top the table, falling to defeat at Villa Park with a performance that was distinctly average at best. Too many players were woefully below the level required if Everton are to mount any kind of challenge for honours this season.

Friday night footie saw the Blues travel down the M6 to newly promoted Aston Villa to renew a fixture that is the most played in English league football, this being the 203rdencounter between the two clubs.

Villa were yet to record a point since their return to the top flight having lost their opening fixtures away to Spurs and at home to Bournemouth whilst recording the most shots on goal other than Manchester City, a fact not lost on manager Dean Smith when he noted in his pre-match press gathering, “We’re creating chances, we just need to start taking them. There’s certainly no frustration with [forward] Wesley from me or his team-mates. He brings other people into play and he’s getting better and better. We’re two games into the season. He’s one goal behind Mo Salah at the moment – I’m not judging centre forwards this early in the season.”

With four points from six but only one goal scored, Everton had the chance to go top of the table if they took all three points whilst another clean sheet would see the Toffees record three in the first three games for the first time since 1912.

Marco Silva was pleased that impressive left back Lucas Digne had recovered from a knock sustained in the victory over Watford and was able to return, as was Morgan Schneiderlin having served a one-match suspension. Former Villa midfielder Fabian Delph however was not available for selection for the visitors.

Asked about the possibility of heading the table with a win Marco Silva in his press meeting mused, “It would be good but, we have to prove we are able to do that. Afterwards we will see the result and if we get to the top. In our minds we just have to respect them [Villa] and go there with desire and commitment to win.”

And on the impressive defensive record of his side since late February Silva added, “The numbers are fantastic, not just in the past two games but also how we finished last season. We have to keep working really hard. When you can win with a clean sheet, it is fantastic as a coach. Even if we have an attacking philosophy and like to play offensive football.

With captain Seamus Coleman and Gylfi Sigurdsson both making their 250th Premier League appearances and with many Evertonians keen to see Moise Kean given his first starting opportunity, Silva was hit by an injury to J-P Gbamin and so named his starting line-up as that at Palace, namely: Pickford, Coleman (c), Keane, Mina, Digne, Schneiderlin, Gomes, Sigurdsson, Richarlison, Bernard and Calvert-Lewin.

Our referee for this televised fixture on a warm August evening was Michael Oliver.

Lucas Digne getting forward earned Everton the games first corner with Bernard swinging the second effort to the back post where Heaton collided heavily with Mings who needed treatment before returning to the pitch.

Guilbert, on his debut, was booked in the fifth minute for a pull back on Bernard as the Blues looked to dominate the early stages, Richarlison going down in the box on the end of a neat backheel from Sigurdsson, no penalty was the decision by referee Oliver.

A patient build-up by the Blues came to nothing as Grealish broke up the move, but the Blues were quickly back in possession and looking to probe the home defence, Engels the next defender to get hurt as he stooped to head the ball away from Sigurdsson and Mings accidentally kicked him in the head.

Richarlison set free by Sigurdsson broke right to left and saw his shot deflected for the Blues second corner that saw Mings desperately block a short range effort from Keane.

Applause rang around Villa Park on twelve minutes as a tribute to Rhys Jones who was tragically killed twelve years ago.

Another well worked move saw the Blues work the ball from their own area down the left flank with Bernard cutting in off the flank to cross just too high for Richarlison at the back post.

The Blues had dominated the opening quarter hour but were still in search of the opening goal to reward their efforts.

And our inability to find the back of the Villa net saw the home side take the lead with their first meaningful attack. Grealish took a quick free kick to find Guilbert who laid the ball out wide where Jota came in off the right flank to thread a fine ball through for Wesley to beat Pickford for 1-0 in the 22nd minute.

And the same combination of Jota to Wesley, two minutes later, saw Mina with a telling interception to prevent the Blues falling further behind.

On 32 minutes, a fine ball from Schneiderlin found Coleman in the Villa area and his cutback was perfect for DCL but his shot from ten yards and point blank range somehow hit Engels rather than the back of the net.

The Blues may have bossed the opening twenty minutes but since the goal, Villa had looked increasingly confident and the visitors needed to get back their control as well as find a cutting edge, and with eight minutes left in the first half, Moise Kean and Alex Iwobi both left the bench to warm-up – second half appearances beckoning ?

Villa with a late surge saw Grealish bend a shot from the left wide of the far post and they far too easily ran down the three added minutes to take the one goal lead into the half time break.

No changes by Marco Silva for the start of the second half was something of a surprise to many Evertonians bemoaning the lack of a cutting edge.

Everton were looking far from their best early in the second half as a cross from Coleman sailed way beyond DCL looking for Bernard who fouled his marker and then a cross field ball from Gomes was woefully off target and sailed harmlessly into touch.

DCL saw yellow on 52 minutes for a foul on Wesley ahead of Mina heading over the bar from a left wing set piece in a scrappy and scruffy start to the second half.

A foul by Gomes led to Grealish lofting a free kick to find Mings unmarked in the Everton penalty area, his header cleared amid half-hearted appeals for hand ball against Michael Keane.

The long-awaited (and overdue) changes came just past the hour mark as Gylfi Sigurdsson was replaced by Alex Iwobi and Moise Kean replaced Bernard as the Blues switched to a 4-4-2 formation in search of goals.

Good work by Iwobi and Kean forced a left wing corner on 65 minutes, that Mina met but was deflected out for a corner on the right that came to nothing. Everton were beginning to dominate the possession again, but a poor ball from Gomes spoiled a steady build-up.

Gomes out to Digne saw the Frenchman find Iwobi for a shot that was deflected nicely into the arms of Heaton in the Villa goal. At the other end in a rare Villa attack, Grealish found Taylor in space but his cross was wild and went out for a throw in on the other side of the pitch.

Gomes to Iwobi saw a quick lay-back for Digne to cross, Mings climbing ahead of Richarlison to head clear ahead of a defensive panic in the Villa area that saw Heaton concede another corner that came out to Schneiderlin whose shot was off target. Theo Walcott replaced Richarlison on 76 minutes and El Ghazi replaced Jota for the home side.

Gomes was booked in the 80th minute for some push and shove at a free kick Villa over elaborated with too many passes allowing the Blues to break away, Iwobi, DCL and Kean involved eventually leading to Gomes finding Iwobi for a snap shot that beat Heaton only to cannon back off the post.

Villa hit back with Wesley holding the ball up well to find El Ghazi and his 25-yard effort forced Pickford into his first action of the second half. A flare up on 84 minutes saw a number of players coming together with Michael Oliver eventually showing the yellow card to Trezeguet and Seamus Coleman. Villa immediately withdrew Trezeguet in favour of El Mohamady for the final minutes.

A late, late chance for the Blues to rescue a point saw Kean collect the ball in the Villa area, tun and pick out Walcott who skied his close range effort over the bar.

With five added minutes signalled, it was last chance saloon time for Everton and the one chance they created saw Lucas Digne off balance in lifting his shot well over the bar.

And Villa rubbed salt into the wounds as McGinn fed El Ghazi into the box and his low shot beat Pickford for two-nil.