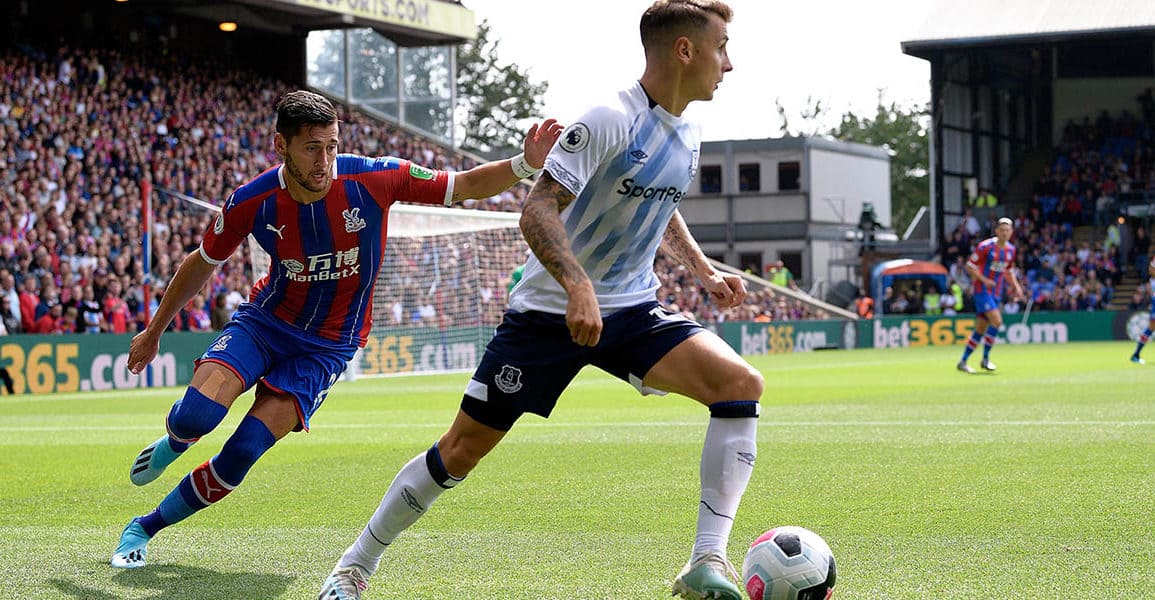 Ten man Blues have to settle for a point.

A second yellow card for Morgan Schneiderlin saw Everton reduced to ten men for the final quarter hour of a match they really should have been looking to win. With well over 60% of the possession, the lack of a killer finish on the day saw the visitors a tad grateful to Jordan Pickford with a couple of fine second half saves to keep the scoreboard blank.

When the fixture list computer spewed out an awayday start for the Blues at Selhurst Park, nobody imagined that the game would come hot on the back of James McCarthy having joined Palace nor the fruitless transfer request by Wilfried Zaha to force a move in the opposite direction.

The summer transfer window for Roy Hodgson has largely been viewed as something of a disaster for the Eagles as they lost Wan-Bissaka to Manchester United, Zaha has the hump over not getting his much expected move away from the club and aside from McCarthy, their only other signings of any note were the aging Gary Cahill from Chelsea and loanee midfielder Victor Camarasa from Real Betis.

With Tomkins, Schlupp and ex-RS Sakho likely to miss the game through injury, Hodgson tried pour calming oil on the troubled waters in his pre-match press gathering. Questioned about whether Zaha would be selected, the much-travelled and veteran manager noted, “Zaha is as I expected he would be. He’s a professional and committed to the club and helping us do what we need to do to stay in the league. He’s trained today just as he did on Tuesday and Wednesday.”

The summer for Marco Silva and Everton was much busier with the arrivals of Fabian Delph, Jean Philippe Gbamin, Moise Kean, Djibril Sidibe, Alex Iwobi and Jonas Lossl, plus the confirmed signing of Andre Gomes who impressed last season whilst on loan from Barcelona. The Blues also saw a number of departures, notably Idrissa Gana Gueye, Nikola Vlasic and Ademola Lookman, while Jonjoe Kenny was one of a host of players going out on loan.

Delph suffered a knock in the final pre-season game away to Werder Bremen and Leighton Baines was also ruled out of the opening game of the campaign. The big questions hinged upon whether Silva would blood any of the new signings so quickly after joining the club and only having had a couple of training sessions.

Silva though found it difficult to mask his feelings, in his pre-match media meeting, that he was disappointed that the Blues had been unable to land Kurt Zouma or another centre back to boost his defensive corps.

He was also somewhat terse when stating, “I know better the club, our players and everything is more clear for us. Our target is to do better in the Premier League, and to do something special in the FA Cup and League Cup.”

While for Everton Marco Silva, much to the chagrin of some Evertonians, resisted the temptation to start Kean and Gbamin opting for: Pickford, Coleman, Keane, Mina, Digne, Schneiderlin, Gomes, Sigurdsson, Bernard, Richarlison and Calvert-Lewin.

On a blustery afternoon at Selhurst Park, our referee was the rotund Jonathon Moss.

An early chance came the way of the Blues with Sigurdsson missing the target when he really should have at least tested the ‘keeper.

A lively opening from the Blues saw them enjoying plenty of possession and forcing the pace with the home side struggling to find any cohesion. A corner from Sigurdsson in the area but his shot was blocked and then Kelly did well to deny DCL on the end of a cross from Coleman.

Everton were well on top, playing with a good tempo and completely on top with good build-up play but still lacking the killer finish to their play.

On the half hour, Bernard and Digne caused havoc and panic in the Palace defence and Guaita made a vital stop to deny Coleman from close range.

Good interplay between Coleman and Richarlison saw them tear van Aanholt to bits, but the final ball was again disappointing and Palace were able to clear and win a free kick to relieve the pressure.

A fine cross from the left by Digne was half cleared and picked off by Gomes to feed Sigurdsson, but again the shot from the Icelandic international lacked power, conviction and was easily blocked and cleared.

A rare attack from the home side came from a free kick with Meyer found in the box and Coleman getting a telling deflection on the shot to take it over the bar for a flurry of corner, all of which saw Palace come up empty-handed.

But, it had been a few moments of pressure that the home side had enjoyed and with half time looming, Palace again attacked through Townsend and Ayew with Mina getting a telling block in and the follow-up cross sailing comfortably wide.

Andre Gomes who’d picked up a knock a few minutes earlier went down needing treatment and Everton reacted quickly to replace him with Jean-Philippe Gbamin, Gomes limping gingerly to the bench.

Milivojevic was lucky to see yellow for a blatant pull back of Richarlisons’ shirt in the opening minutes of the second half as Everton looked to get back on top of their hosts. Ayew and Townsend combined down their right flank but the final cross from Townsend flew miles beyond the waiting Benteke.

Six minutes in and van Aanholt was in the right place on his goal line to scoop away an effort from Sigurdsson found in the area after good work by Bernard.

Bernard and Schneiderlin both picked up yellow cards for a foul on Ayew and a shocking display of petulance respectively. And moments later, Milivojevic was carded for a foul on Sigurdsson.

Benteke manhandled Gbamin off the ball and got forward to feed Ayew with Pickford quick off his line to narrow the angle and make a key save to keep things level. Palace were boosted and the Everton keeper was called upon again moments later to deny Meyer played into space by Townsend.

An hour gone and it was much more of a contest than the first half that the Blues had dominated, and Everton needed someone or something to settle things down and get back to bossing the game. Palace though looked to warm-up Zaha while Richarlison found Sigurdsson who twisted one way then the other before firing in a low shot that Guaita gathered safely.

On 64 minutes, Zaha replaced Ayew and the home crowd gave him a tremendous reception despite him having submitted a transfer request earlier in the week.

Some good passing and movement worked an opening for Richarlison, but he bent his first time effort just wide of the post.

Moise Kean got his debut appearance on 68 minutes replacing DCL who again had worked hard but continues to struggle in front of goal.

Loose play by Sigurdsson saw Palace get forward quickly looking for Zaha, Michael Keane with a solid clearance before Palace crossed the ball in again, this time Zaha had strayed offside.

Zaha then played in van Aanholt for a cross that Everton were glad to see Digne clear behind for a corner that was wasted, but if anything, Palace were now looking the more likely and their cause was helped when Schneiderlin picked up a second yellow for a foul from behind, reducing Everton to ten men with still a quarter hour to play.

Everton reacted by sending Tom Davies on to replace Sigurdsson who by his standards had had a rather poor afternoon, giving the ball away rather too cheaply and not making the best of three decent chances.

Zaha with a sharp turn got into the area and to the byline looking to find Wickham, Everton were grateful to Pickford and Davies snuffing out the threat.

Four added minutes were signalled after Beranrd worked hard to send in Digne, but Ward was strong in seeing the ball behind for a goal kick.

Neither side could force a winner an the spoils were shared. For Marco Silva though, this was surely an opportunity lost, if Everton are to push on from how they finished last season, with no disrespect to Palace, these are the types of games Everton simply have to find the ways to win.