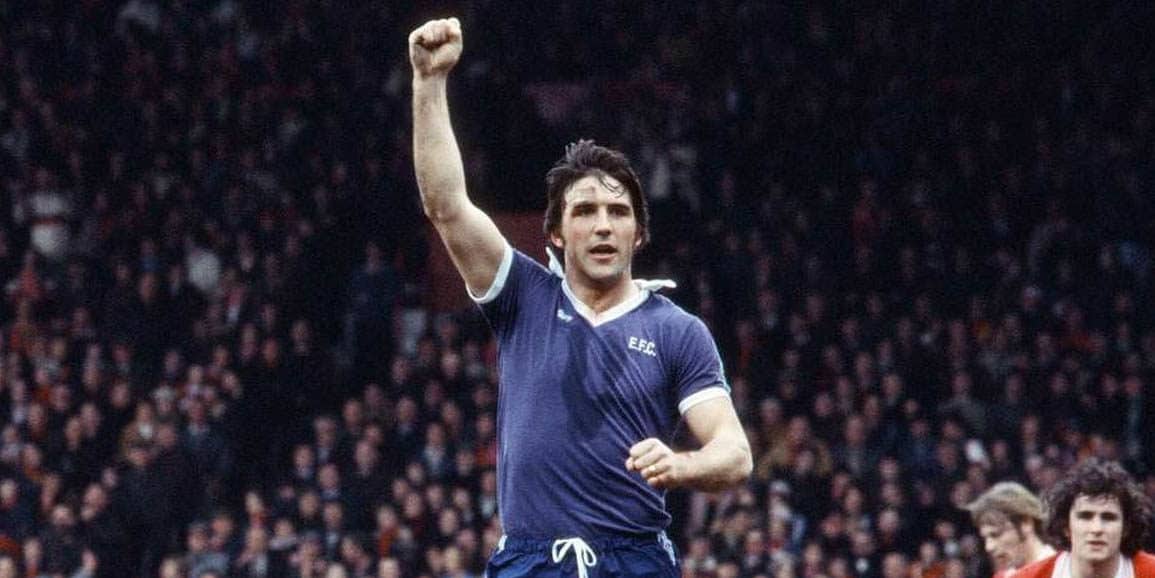 ‘At a time when we looked enviously across Stanley Park at the success that we had once thought was ours to take, a time when people would go into school and work and endure the daily smugness of Liverpudlians, a time when you felt so much in Liverpool’s shadow, Bob Latchford was something magical, a class player that Liverpool didn’t have. And that mattered’ says Brian Viner, author of Looking for the Toffees: In Search of the Heroes of Everton.

Latchford had arrived at Everton from Birmingham City in 1974, in a deal that was both headline grabbing and contentious. The transfer fee of £350,000 was a British record. But the deal itself was not cash alone. It was a player-plus-cash offer, with Everton offering £80,000 plus Archie Styles and, most controversially, Howard Kendall.

The letters pages of the Liverpool Echo were inundated with complaints and outrage at the move, illustrating how highly Kendall was still regarded amongst Evertonians.  It placed an extra level of expectation on the head of the new arrival, who was already feeling the pressure of that transfer fee, as he recently explained to the Football Pink:

‘I carried the burden until I got my first goal for the club. I didn’t score in my first two games for Everton, but then I opened my account against Leicester City and the great weight was lifted.’

And once he got going, Latchford kept at it. In that first campaign, he managed more than a goal every other game (a rate he roughly kept up throughout this Everton career), helping haul Everton up the table and providing a vital outlet for a team that had struggled to score before his arrival.

‘He was great to watch’ remembers Viner. ‘He didn’t score great goals, like bending free-kicks or thirty-yard screamers. But he was big, strong and powerful and read the game superbly. He seemed to always be in the right place at the right time; a natural born goalscorer.’

First under Bingham and then under Lee, Latchford provided the kind of fire-power that could lift a side, giving it the realistic prospect of challenging for the title and collecting silverware.

But despite coming close on several occasions, his time with Everton would never be marked by top level success. In the end, he had to make do with a different kind of glory, the achievement for which Evertonians, and those outside the club, ultimately went on to know him best for.

Ahead of the 1977/78 campaign, the Daily Express had offered a £10,000 prize (no small amount by the standards of the time) to the first player that scored 30 league goals in the First Division that season. Latchford, despite topping the Everton scoring charts three years in a row and bagging 17 league goals in the previous year, was not considered a favourite by the bookies.

‘I think us Blues gave him a better shot. We were playing good football and he seemed as decent a bet as anyone to reach that target first’ remembers Dave Prentice, lifelong Blue and the Liverpool Echo’s Head of Sport.

Although his failure to get on the scoresheet in the first three games of the season might have dented any initial confidence, Latchford did eventually start to pick up goals.

‘He would go a few games without scoring and then bang in four against QPR or three against Coventry. So just when you thought he might not do it, he’d suddenly and dramatically remind you just what he was capable of’ continues Dave.

Along with Everton’s more attack-minded football that season, which inevitably gave the club’s forward more opportunities, Latchford also benefited from the arrival in the summer of Dave Thomas from QPR.

‘Thomas was a fantastic winger and he could put a cross into the box on a sixpence’ remembers Viner. ‘He was the perfect supplier for a forward like Latchford, someone who was so predatory in front of goal. The two of them seemed to understand each other, know exactly what the other had in mind. It was one of Gordon Lee’s better moves.’

Despite Latchford’s potency and Everton’s sparkling form, the 1977/78 season ended up being a frustrating one for Evertonians. A hoped for title challenge had stuttered and as the run-in approached the Blues fell off the pace against eventual winners, Nottingham Forest.  Although European football was ultimately secured, the fans were left with the lingering sense that the side could have done much more.

To make matters worse, Liverpool had once again reached the final of the European Cup, where they had the opportunity to defend their title against the unfancied Club Brugge.

‘The sole silver lining for us Blues was Latchford. As the season had closed he’d got closer and closer to the magic number. By the end, a home game against Chelsea, he needed two goals to get himself over the finishing line. For Evertonians back then, him doing that would be our “title”, our “European Cup”. It was that important’ argues Brian Viner.

On the Day itself, Latchford recalls feeling pretty relaxed. ‘I was very calm all day. I woke up very calm, which is unusual as I always had a little bit of tension … but on that day nothing. Just a total calm. I knew I was going to get the two goals’ he recently told ToffeeTV.

Although he might have been eerily calm, for those in the ground, it was a different story:

‘There was a palpable sense of tension in the air. You could feel it. 40,000 nervous fans crowded into Goodison on that Saturday afternoon to see if Everton’s number nine could reach that magical target’ recalls Dave Prentice.

Everton made mincemeat of the Londoners that day, dominating them throughout. ‘We strolled to 2-0 lead within 15 minutes and it could have been more. Chelsea were overwhelmed and Everton were magnificent. But the strange thing was, I don’t think anyone really cared about winning or losing. They had come to see Latchford score and so when Dobson and Wright got the opening goals, the crowd wasn’t that bothered’ continues Dave.

The scoreline remained the same until the 54th minute when Neal Robinson, the 21-year-old rookie right-back, scored his first (and what would prove to be only) goal for the club.

‘You have to feel for him’ says Brian Viner. ‘What should have been a glorious moment for the youngster was marred slightly by the muted reaction. By that point we were all starting to get a bit impatient and were even less interested in other players scoring than we had been at the start of the match!’

Although Everton were rampant, and Chelsea largely passive, as the minutes ticked along it looked to those watching as though Latchford might fall at the final hurdle.

‘We were just beginning to think it wasn’t to be when Mick Buckley put a cross into the box and Latchford was able to get on the end of it to get his 29th. The noise from the crowd was incredible. You’d have thought it was a cup final or something’ remembers Brian Viner.

Mick Lyons added a fifth long after, leaping in front of Latchford to head home from a corner. Everton’s stalwart centre-half then further tested the patience of Everton’s centre-forward when he got up top again, latched onto a loose ball and thundered a shot against the crossbar. (couldn’t find reference to the hitting the crossbar)

In an interview with the writer and Evertonian, Andreas Selliaas, Latchford revealed that his response to Lyons’ effort suggests that the pressure was finally getting to him:

‘Mick Lyons is the toughest player ever to play for Everton and I’ve never had a negative word to say against him, before or now. But the pressure was immense that day to get to 30, and when Mick hit the crossbar instead of passing, I shouted at him “Fuck off, Lyonsy, and stay in our half!”.’

Luckily for Latchford, it was advice that his captain opted to ignore. ‘I think we were all starting to think it might never happen when fate intervened’ remembers Brian Viner.

The Chelsea centre-half Micky Droy challenged Lyons in the box, and the Everton captain went to ground. In all honesty, it was a bit of a soft pen but it didn’t matter. The referee signalled to the spot and Goodison roared its approval.

It’s remarkable, that nearly all of the goals Latchford had scored to that point had come from open play. Penalties were not usually his responsibility. But this opportunity wouldn’t be passed. There was only one man to take that spot-kick. He duly stepped up to grasp his date with destiny.

Latchford took up the story in A Different Road: ‘Martin Dobson took me to one side while Chelsea began to protest. “Just keep your head down and blast it” he whispered. I followed his advice. I thought about exactly where I wanted to put the ball — to Bonetti’s right- hand side. There were no nerves. The excitement cancelled out my fear and I was feeling numb. I was simply waiting for the whistle. This was my big chance. The ball left my right foot, I closed my eyes and then heard the Goodison roar. Elation. Relief. Satisfaction. I ran to the supporters and sunk to my knees. As fans ran on to the pitch, my team-mates ran towards me. The fairy tale was complete.’

It was not the greatest penalty that you’ll ever see but it did the job. Everton were 6-0 up and Latchford had got his 30.

‘I think up to that point, that was my greatest moment as a Blue’ says Brian Viner. ‘I had never experienced an atmosphere like it. The whole place was rocking. You have to appreciate how important that goal was. In a decade when so little had gone right for Everton, that was a moment to truly cherish. Bobby Latchford walked on water. And he was ours!’