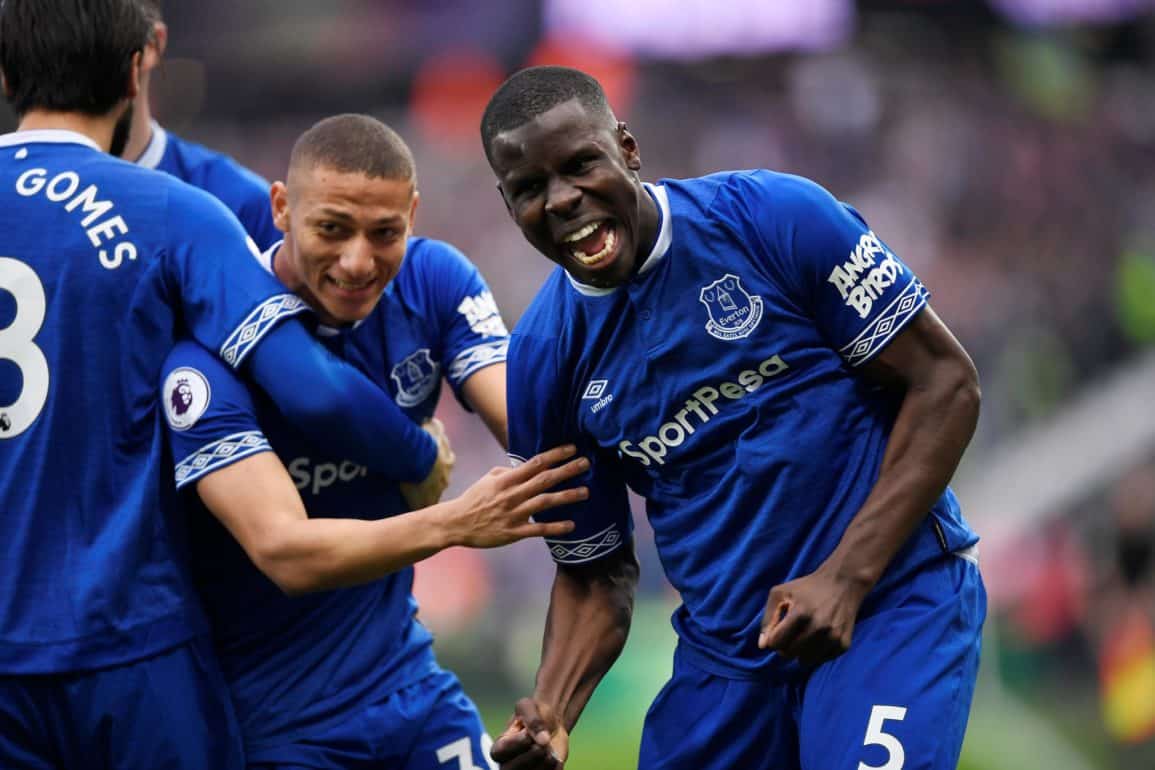 An excellent 90-minute performance from Everton saw them completely dominate a shocking West Ham side as they out thought, outfought, outplayed and outclassed their hosts with consummate ease to move two places up the table on goals from Kurt Zouma and the very impressive Bernard.

Another international break gave Everton two weeks to reflect upon their fine win over Chelsea last time out and prepare for the trip to the London Stadium to avenge the home loss to the Irons back in early September.

The Hammers, fresh from a come-from-behnd victory over Huddersfield, had a number of injury concerns for manager Manuel Pellegrini to contend with. Winston Reid, Jack Wilshere, Andy Carroll, Carlos Sanchez and Andrei Yarmolenko were all ruled out and Sami Nasry was rated as highly doubtful having picked up a calf injury.

Even so, the east London outfit went into this tea-time kick-off unbeaten in their last six home game and looking for a fourth home win on the bounce. Pellegrini noted in his pre-match press gathering, “We are playing at home against a team two points behind, it will be a very difficult game. We need to be very concentrated on defending. We want to continue to try and fight for that European spot. They have invested money, they will reach the position they want to but, at the moment, they are similar to us and that is why it will be a difficult game.”

Pellegrini has a good record with five wins and two draws in the seven games he’s managed against the Blues and looking to maintain and improve that record, he selected his side: Fabianski, Zabaleta, Diop, Ogbonna, Cresswell (c), Rice, Snodgrass, Obiang, Lanzini, Arnautovic and Perez.

On the back on the encouraging win and performance against Chelsea, Everton went into the game without Yerry Mina, injured on international duty with Columbia, so loanee Kurt Zouma was the odds-on favourite to partner Michael Keane in the heart of the Everton back four. They also had a slight concern over Andre Gomes and Marco Silva was prepared to wait as long as possible to give his fellow Portuguese every chance to prove himself fit to play.

Silva was also well aware of the task ahead of his side with Everton winless in their last ten visits to teams in the capital, looking to avoid three straight losses to West Ham since well before the outbreak of World War 2, and with Everton having enjoyed their best Premier League success record against West Ham with 24 wins.

Silva countered Pellegrini’s quote about money invested noting, “They spent more than us this season. They showed what they want and showed the individual quality they have in their squad. It will be a tough match. In some moments they show some inconsistency also, but their form in home games is really good. It is a challenge for us to go there and break that record they have in the last few games. We have to prove again our quality.”

In charge of proceedings on a pleasant spring evening was referee Paul Tierney.

A fine ball from Gana Gueye saw Richarlison earn an early corner off Cresswell and from the corner, Sigurdsson found the head of Kurt Zouma – climbing like a stag in the mating season – and his downward header bounced sweetly over the head of Cresswell on the line for the fifth minute lead.

Gomes and Sigurdsson caused more panic in the home defence and it was Obiang conceding a second corner that came to nothing. Bernard then went on a surging run and maybe took one touch too many before having his hot blocked.

Gana Gueye getting forward forced West Ham into conceding a third corner in the opening ten minutes as the Blues dominated the early exchanges.

Everton should have gone two goals ahead when a through ball for DCL saw him pull a fine save from Fabianski who then did really well to deny Sigurdsson on the follow-up when fed by DCL. Everton kept the pressure on and the home keeper again denied Sigurdsson on a shot from the left before punching clear to deny DCL as he looked to get on the end of a cross from the right.

Another flowing move started by Keane and involving DCL saw the ball worked wide left for Bernard and his teasing cross was just to strong for both DCL and Coleman, arriving at the back post, to get on the end of.

On a rare foray forward by West Ham, Zabaleta found Lanzini but he was quickly denied by Gana Gueye getting back to win the ball cleanly.

Everton were taking West Ham apart and another right wing move saw Coleman find Richarlison in the box and again, the cross was just too far in front of DCL with the home defence all at sea. Everton could and perhaps should have been at least three goals ahead and we’d only just passed the twenty minute mark.

West Ham, berated by Pellegrini from the sidelines, began to push up in an effort to deny Everton the kind of space they’d allowed in the opening quarter. A rash challenge by Rice on Richarlison saw the Blues win a free kick, but Everton didn’t make the most of it.

Nice interplay between Gana Gueye and Sigurdsson on the left worked a crossing opportunity for Bernard, but Ogbonna made a clearing header. But the Blues would not be denied and on 33 minutes, the overdue second goal came as Gomes found Coleman to play a neat one-two with Richarlison to find space for the cross and Bernard easily escaped Zabaleta to score nonchalantly from six yards.

It was nothing more than Everton deserved as they’d been totally dominant since the kick-off and the fantastic travelling support were quick to celebrate the little Brazilians’ second goal for the club, his first in the Premier League.

Gomes with a powerful, driving run fed Richarlison to get away from Cresswell, Fabianski with his legs dealing with the low cross as Everton looked for a third first half marker.

On another rare Hammers raid, Snodgrass getting to a ball from Lanzini saw his first time shot curl away from the target. Richarlison with a challenge on Lanzini saw the first yellow card waved in his direction, the free kick from Snodgrass sailing aimlessly into touch.

As the interval loomed, Pellegrini made his intentions clear for the second half by sending Hernandez and Antonio out to warm up. Two late corners for the home side saw Keane and Richarlison clear respectively as the Blues completed a thoroughly impressive first half of football.

As expected, Hernandez and Antonio came out for the second half for West Ham replacing the ineffective Perez and Obiang respectively.

A foul by Coleman on Arnautovic saw West Ham waste an early free kick, Bernard with an easy clearance as the second half started at an almost leisurely pace. Gana Gueye was on hand to deny West Ham any real forward motion after Zabaleta beat Digne to a ball in midfield. West Ham continued to stutter as they wasted another free kick after a foul by Bernard on Lanzini.

Sigurdsson found by Richarlison in turn found Digne in space and while his cross was too strong, Coleman pressured Arnautovic into conceding a corner that saw Zabaleta with a crucial block on a volley from Gomes.

Antonio was beginning to offer something of a threat down the Everton left side and the Blues needed to be alert from two quickly won corners. They were quickly back on the front foot though with a break from DCL that eventually saw the ball spread wide to Bernard to skip away from his man and cross towards Richarlison at the back post, West Ham clearing frantically.

On the hour mark, Richarlison span away from his marker but his shot didn’t have anything like the power to beat Fabianski. With the home fans trying to rally their team with a rendition of ‘I’m forever blowin’ bubbles’, Rice drew a yellow card for a blatant pull on the shoulder of Gylfi Sigurdsson.

Diangana became the third change for West Ham on 67 minutes as he replaced the disappointing Arnautovic, the sub taking the right flank with Antonio switching to the left side. Michael Keane took a knock in the face from Gana Gueye as they combined to foil Lanzini trying to work an opening.

Into the last twenty minutes and the Blues were still in comfortable control and a combination between DCL and Sigurdsson saw the Icelander return the compliment, the shot from DCL going just wide of the target.

A superb ball from Michael Keane found DCL in space to get away from Ogbonna, but his early shot failed to test Fabianski as it was high and wide of the target.

Everton were going for a third goal with Gomes running the midfield almost single-handedly and another move prompted by the Portuguese saw Sigurdsson and Digne win a corner that was swung in and cleared by the home side.

Digne and Gana Gueye worked to release Sigurdsson down the left and his inside ball for DCL saw the centre forwards shot deflected for another corner that saw Richarlison crash his header against the crossbar with Fabianski grateful to hang on to the loose ball.

Tom Davies replaced Gylfi Sigurdsson on 84 minutes as the home fans continued to head for the exit stairwells in droves, while the superb travelling support continued the early celebrations. Cenk Tosun came on for a late 87th minute cameo replacing DCL who had worked tremendously hard all game and he received a warm round of applause from the Blues fans.

Michael Keane with two defensive headers ensured the Blues recorded another clean sheet as they moved up to ninth in the table and retained an outside chance of Europa League qualification if seventh place can be achieved.