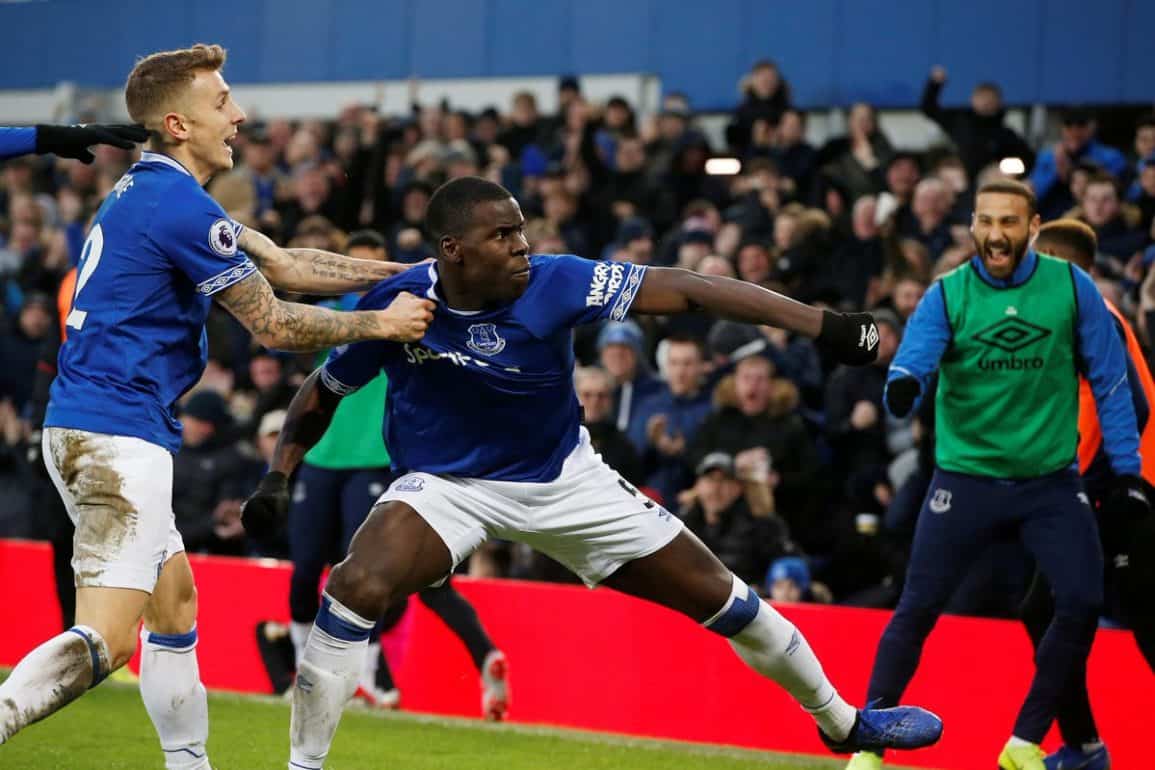 A quite astonishing afternoon of highly contentious refereeing finally saw Everton back to winning ways on superb strikes from Kurt Zouma and substitute Dominic Calvert-Lewin.

Sunday afternoon footie pitched Toffees versus Cherries, 11th versus 12th with a win taking one club three points clear of the other.

In the week following the clubs AGM and currently overseeing a poor run of form and results, Everton manager Marco Silva is aware that despite the support he’s enjoying from major shareholder Farhad Moshiri, a turnaround n form, fortunes and results are an absolute necessity from now till the end of the season.

Silva commented as much saying, “It’s clear we have to do better. He (Moshiri) is a supportive owner like the chairman also. I want more and they want more, it reflects what we want to build and achieve in the future.”

With a full week to prepare and with no injury worries, Silva was expected to return Lucas Digne to the left back role and retain Ademola Lookman in his starting eleven after his showing and goal in the FA Cup win over Lincoln.

Opposite number Eddie Howe was less fortunate with his available players, having fitness doubts over Ryan Fraser, Josh King and Callum Wilson. £19m signing Dominic Solanke won’t feature for the Cherries having been ruled out with a hamstring injury.

Howe, himself on a poor run of results in recent weeks including, being dumped out of the cup by Brighton, remarked, “It’s another massive game for us, we did really well to come back from two down against them earlier this season. It’s two teams that want to attack and impose their attacking lay on the other team.”

Our referee on a cool, blustery and rainy afternoon was Anthony Taylor.

Fraser with an early dispossession of Coleman tried to find Stanislas with Keane on hand to clear. Smith with an ankle tap on Lookman gave Everton a free kick that saw Sigurdsson find Keane but his header was easily saved.

Everton survived a scramble on seven minutes as Brooks got away on the right cross and find Fraser at the back who played the ball into the danger area where Pickford was a bit fortunate to save from King.

The visitors had settled much the better and Lerma shot wide from 22 yards as they got forward again.

On 13 minutes, Goodison howled for a free kick as Zouma appeared fouled, but the ref waved play on and Brooks saw his shot across goal beat Pickford but come back of the foot of the far post.

Goodison howled again as Ake climbed all over Richarlison and again the baldy-headed official waved play on. The catalogue of strange calls continued when Gana Gueye was called for foul just outside the Everton area and Stanislas bent his shot around the wall with Pickford down a little bit late to steer the ball away for a corner.

An error by Pickford, not his first it reluctantly must be said, saw Fraser with a chance to cross for King who headed over. As the Blurs tried to get going, Marco Silva clearly told Keane to tell Pickford to calm down.

Everton finally strung a few passes together on the half hour mark Keane, Sigurdsson releasing Lookman to charge down the right channel to cross for Bernard whose header went wide.

Goodison rang to ironic cheers a minute later as Gosling was called for a foul on Richarlison as the rain began to increase.

Digne to Sigurdsson to Bernard to Richarlison eventually saw the ball come to the right for Bernard to cross for Lookman at the back post but he was unable to get a shot in and Bournemouth cleared.

Bernard was booked on 37 minutes for a trip on Smith ahead of Lookman with a terrific ball finding Coleman in space and his first time cross was blocked for a corner. Sigurdsson swung it to the back post for Lookman to find Digne to cross for Keane to see his header scrape the top of the crossbar.

Another found by Gosling gave Everton a free kick that saw Digne hit the wall and then Bernard cutting in off the left saw Sigurdsson screw his shot wide of the far post.

The rain abated during the interval and the Blues quickly got on the front foot as Sigurdsson found Bernard on the left and his lay back saw Gomes shoot high and wide.

Silva had seemingly given the side a rocket in the dressing room as they poured forward as Richarlison was denied from close range at the back post in a frenetic opening to the second half.

Bournemouth countered to win a corner which saw Fraser find Smith whose header was just too high.

Everton wasted a free kick when Lerma blatantly fouled Bernard after the ball had been played to Richarlison, the Bournemouth player wasn’t booked for the offence.

Everton finally broke the deadlock on the hour as Bournemouth failed to clear their lines from a corner and the ball was worked wide left for Digne to cross perfectly for Kurt Zouma to plant a firm header beyond Begovic.

A mis-control by Keane on a strong pass from Zouma saw him lunge in on Fraser as Bournemouth broke with Kings’ hitting the side netting, Keane was subsequently booked.

Another incredulous decision by referee Taylor in favour of the visitors saw both Gomes and Zouma booked for protesting too vociferously.

Into the final quarter hour and after a tepid, disjointed first half, the game was now lively, combative and far from dull.

A Bournemouth free kick saw Pickford punch clear under pressure and then easily gather a header from the next corner.

The Blues countered with Sigurdsson swinging in a cross that Richarlison dived full length to head, the ball going just wide of the near post.

Theo Walcott replaced Bernard on 77 minutes, the Brazilian getting a fine ovation for his efforts.

Brooks with a clear and blatant trip on Lookman escaped a card quite how, nobody inside Goodison could fathom why.

Smith, the Cherries captain, did well to stick with and force Richarlison wide as he looked to shoot, the shot eventually going wide of the target. The referee then compounded the frustration of Evertoniand by booking Richarlison for a nothing foul on Smith.

With Richarlison and then Lookman fouled, the referee warned Marco Silva about his touchline protestations.

Calvert-Lewin replaced Richarlison on 86 minutes as torrential rain returned for the closing stages of a quite bizarre game… from an officiating standpoint at least.

Pickford needed to be quick off his line to smother an effort from King as Bournemouth strained for a late equaliser and survived another scare as a low cross from the right saw Keane play the ball to safety off a Bournemouth player.

With five added minutes indicated, Bournemouth pressed forward and Pickford denied Gosling at close range at the expense of a corner. The visitors kept the pressure on and won another that saw Pickford race from his goal to crash the ball downfield.

It was all hands to the pumps as Bournemouth won another corner and Pickford saved from Smith to waste a few seconds.

And the Blues wrapped up the points with a goal of real quality, the ball played left for Lookman and his precise cutback was beautifully side-footed home by Calvert-Lewin.