We’re 2 games into the new season, already we’ve learnt so much about how our team is going to operate & more importantly (too me) how our team reacts to pressure & adversity.

In this brief article, I will be going back to my previous article to see if anything written has come to fruition & I’ll include graphs, charts and all that jazz.

Our shape in the opening 2 matches has been pretty good. Against Wolves we adapted brilliantly after Jagielka’s red card, opting to take Gylfi Sigurdsson off for Mason Holgate was probably the correct decision, although losing a man in central midfield was telling as the majority of Wolves build up play was through Ruben Neves & Joao Moutinho. I’m almost certain the Everton of last year would have been ripped apart in this scenario, the work-rate & yearning to win is something I haven’t seen since the Moyes days.

The 1st half at Goodison vs Southampton was superb, we kept possession well, we dictated the pace of the game & we stopped Southampton get into any dangerous areas around our 18yard box. It may sound bizarre, but we perhaps conceded the best goal possible… bear with me on this. We were 2nil up, we didn’t concede in open play, we have highlighted a massive problem when defending zonally from corners & its only our 2nd competitive game under Marco Silva so the issues can be resolved early on.

During the first 2 games there has been a common trend, yep! Richarlison. I wrote in my previous article “Marco Silva usually sets his teams up with width being the main source of creativity”. Richarlison is an out-and-out magician on & off the field, he just seems to get it!

I previously stated Richarlison is the perfect blend of strength, skill & finesse, and it couldn’t be truer. There’s something satisfying about an attacking player sprinting back to throw in a slide tackle Tony Hibbert would be proud of! On the ball is where he truly shines, undeniably fearless & poised, his strike against Wolves was something from the Thierry Henry scrapbook! 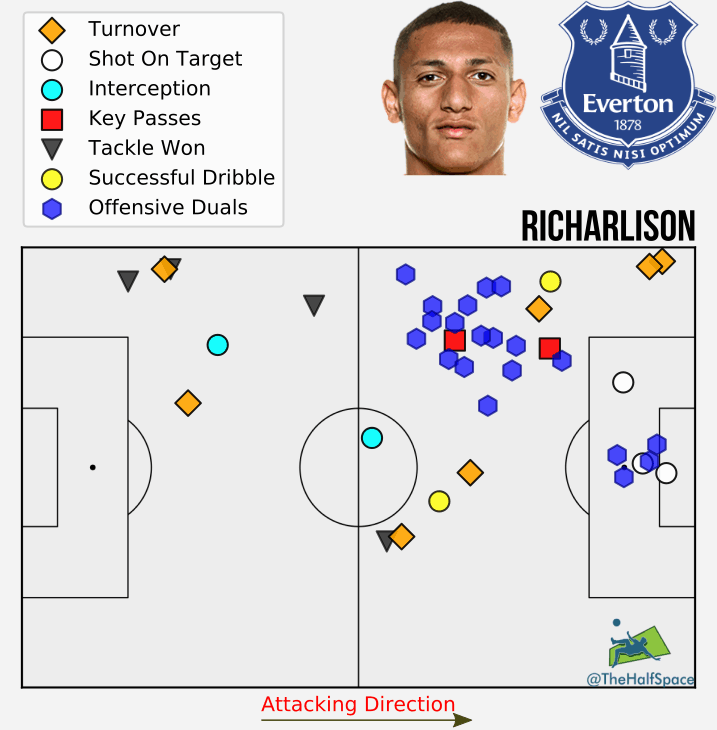 So far after 2 games the 3 shots on target by Richarlison have all ended in goals, not bad! It’s his defensive work that really stands out to me on this chart, hence why I included Tackles & Interceptions. Successful Dribbles are measured as beating a man and regaining control of the ball, whereas Offensive Duals are measured as a 50-50 situation where the attacking player has come out on top. Key Passes are recorded as a pass that leads to a shot on goal & Turnovers are recorded as miscontrol or failed dribbles. Hope this helps!

As soon as Morgan Schneiderlin went off against Southampton, our shape fell apart. I have been one of Morgan’s biggest critics, but he has certainly left an impression on me so far! 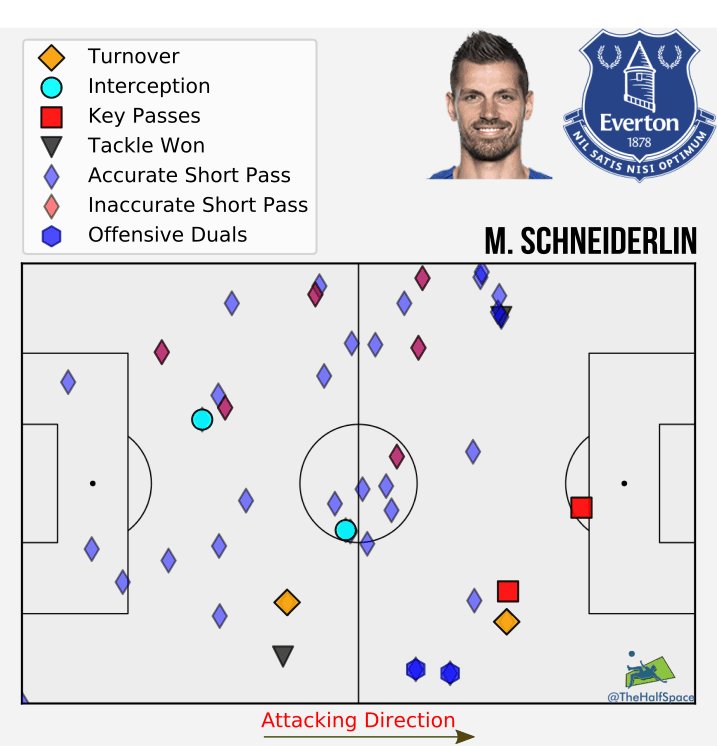 Schneiderlin’s chart is a little easier to read, it’s everything you expect from a Central Midfielder. You might see that he only misplaced his passes on the left side, that doesn’t alarm me as it shows that he is trying to make passes to get on the end of Richarlison’s runs, also 2 games are no where big enough of a sample size to see a trend within mistakes.

I think he’s been great so far, he has kept a balance in the side that we have needed badly! I know that Marco Silva demands a lot from his central players so seeing Schneiderlin flourish is quite pleasing! 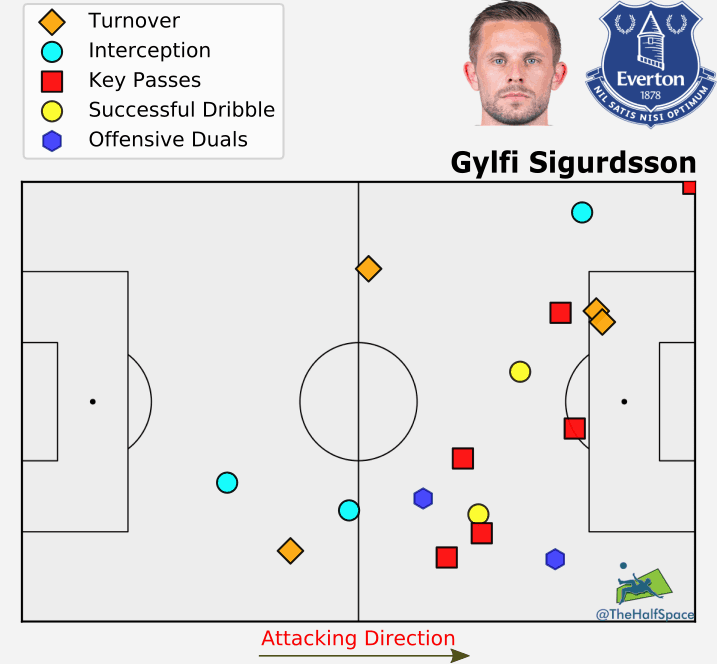 Another key performer in the opening 2 games has been Gylfi Sigurdsson, although he was substituted halfway through the Wolves game he has managed to complete 5 Key Passes which is brilliant & a visual representation of how effective he can be when playing in his natural position.

With every passing game he plays we will see him develop and increase his output, his record tally for assists stands at 13 during the 2016/17 season for Swansea… I’d bet he beats that this season.

So, everyone knows Gylfi & what his game consists of, onto Cenk Tosun who is still something of an unknown to Evertonians. Personally, I love Cenk and think he could be a star, he was known abroad as a ruthless goal-scorer with do or die passion which gained him the love of the Beşiktaş fans.

Last season he was isolated up top & at times I genuinely felt sorry for him. Now we’ve got a fresh start, and everything is rosy! 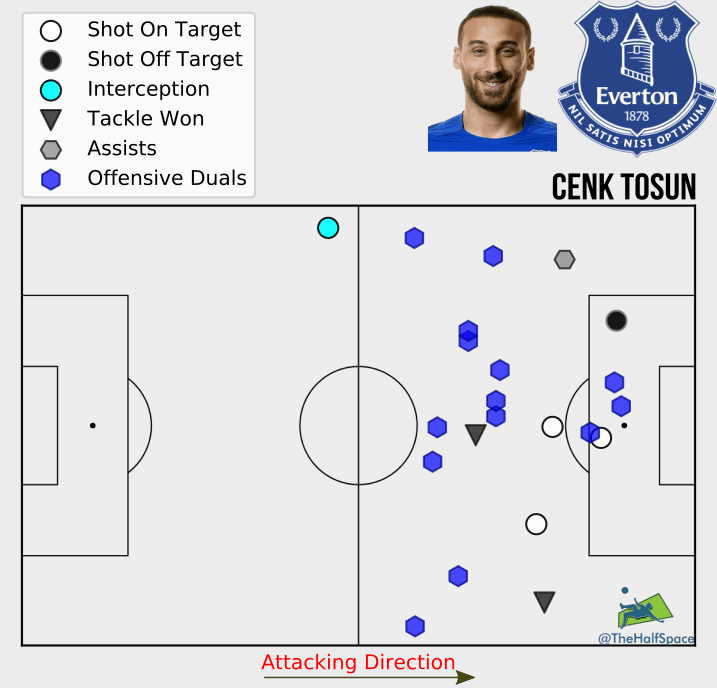 With the added support of Richarlison & Walcott alongside him, Gylfi sitting in the 10 role & Bernard due to come into the team… Cenk has a lot to look forward too.

So far, he’s showing a lot of what he did last season, his physique helps him when winning his duals, he possesses terrific work-rate and desire, he just needs to start finding the net.

Looking at Cenk’s chart from last season gives us more of an idea of what his game is tailored around. 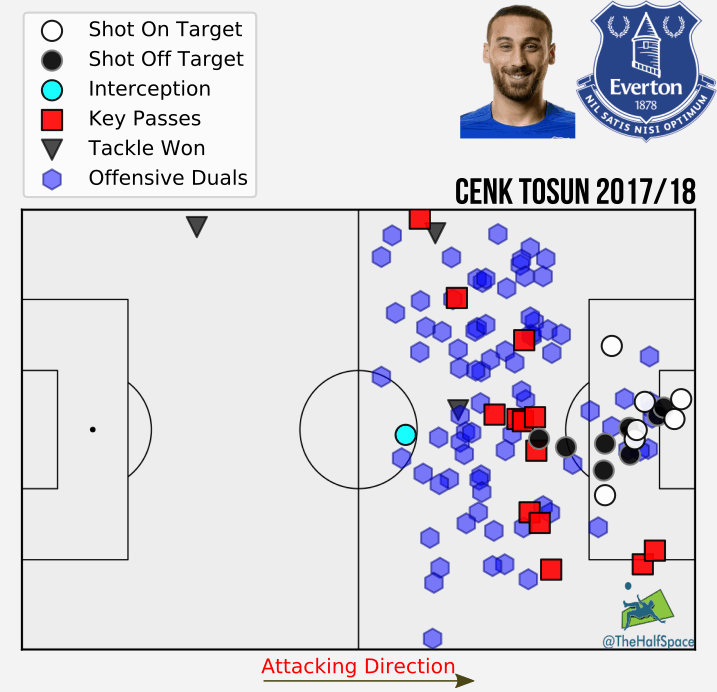 Now I know last season our game was Pickford to Tosun or Calvert-Lewin and play from them, possibly why Tosun has a lot of Key Passes last season. What surprised me most from this chart was the amount of shots off target from seemingly easy positions but given last season was a write off, I can forgive him.

The signs are there for an exciting season, lets just hope we can carry this positivity forward & make Goodison a fortress!