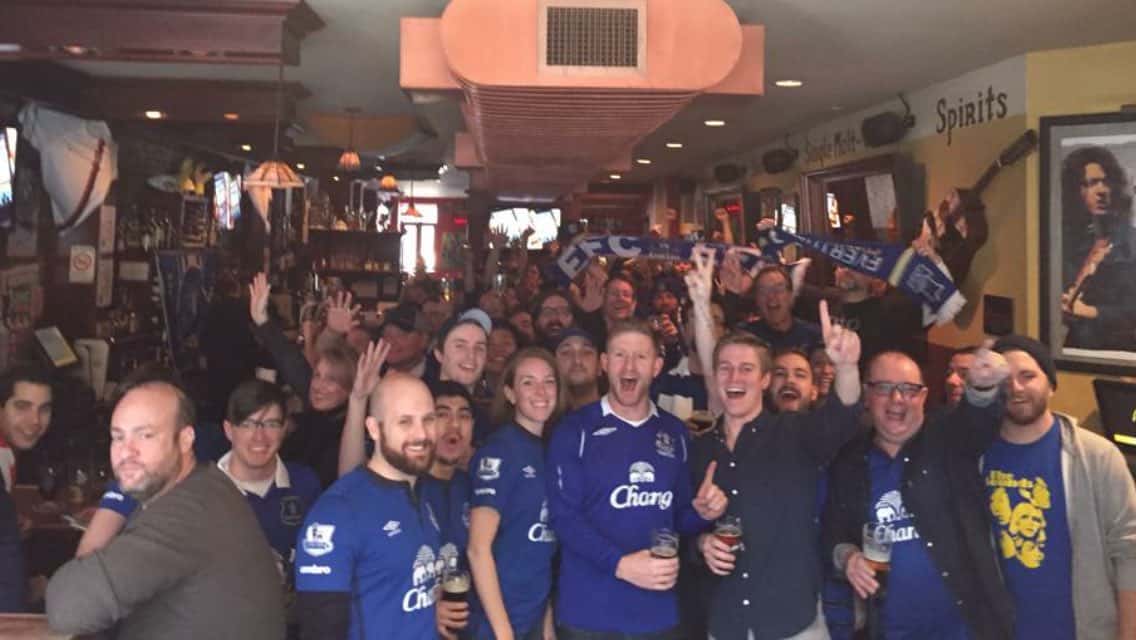 Being 3000 miles away from Goodison can sometimes feel like a blessing – especially this season. Frankly there aren’t enough time zones between me and Allardyce. But it does make pilgrimages to the Dark House by way of the Park End more tricky. Working in New York may sound good (and tbh it is) but when your heart is in L4 there’s always a tug. I moved here nearly 4 years ago for work – giving up my season ticket and trying to work out whether I’d get shot for wanting to watch a Limey sport in a bar.

I needn’t have worried because I found a little piece of Goodison in the heart of Manhattan and it became a beloved second home. Mr Dennehy’s is the only Everton bar in Manhattan. Adorned with flags and memorabilia, it was the Goodison in exile for American blues, lost Scousers and visitors who wanted to catch a match. Every game was shown. Sometimes opening at 7am on Boxing Day to let a swarm of hungover fans get in some heroically early drinking.  It was a landmark. New Jersey’s Tim Howard went there and left his gloves behind the bar as a souvenir. It was voted ‘The Best Soccer Bar in NY’ which was satisfying given the competition was from a bar belonging to celebrity child-spitter Jamie Carragher.

Every weekend the passersby in the swanky West Village would hear screaming voices singing ‘Grand Old Team’ and the odd sound of American accents shouting at Lukaku for not being able to trap the ball. I loved the place. And the staff. Free drinks would occasionally be downed on the all too infrequent occasions of an Everton win. It really was ‘Cheers’ but for Toffees. Where everybody knows your name. And shares your pain.

But no more. It’ll close in 2 weeks. The Everton Stoke game will be the last blues match shown. Soaring rents have made the bar unaffordable and after 15 years, this wonderful place will close and something beautiful will disappear. Many Everton fans over on holiday will know the place I mean and how even 3000 miles away, you suddenly found yourself somewhere familiar. With family.

This isn’t much of an article. More a personal lament. Being a football fan in the US is brilliant for many reasons – the coverage is better and you really never miss a match. In a city seemingly teeming with the shirts of the usual suspects, Arsenal, Chelsea, City, United and ‘them’ – Mr Dennehy’s was an oasis of the faithful. Friendships were made and cemented. Memories will linger long.

The packed bar for the Anfield league derby which spent 70 odd minutes in frustrated rage bursting into joyful song after Rooney’s stolen point will be the one I treasure from this season.

If you went there you know. If you didn’t you might not care. It was great. And I’m sorry I won’t be able to sink a Brooklyn beer at 8am and fume at 2 defensive mids in the company of my fellow travelers again.

Thanks Mr Dennehy’s. You’ll be missed more than any player I can think of.